Event pros behind the official and unofficial events share what it's really like to plan historic events. 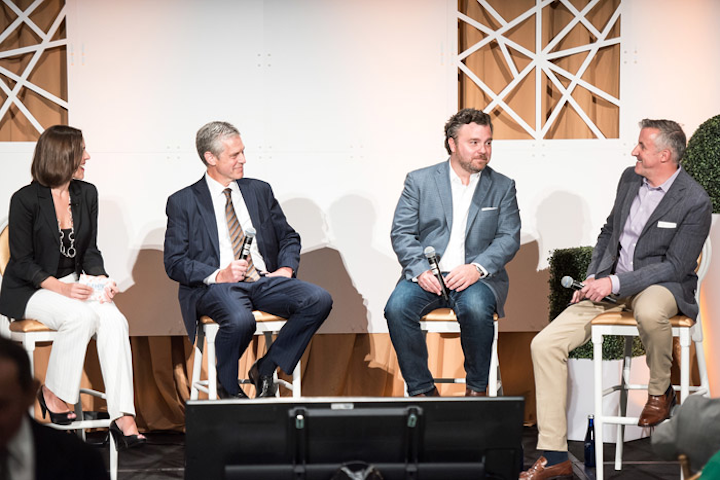 Whether Hillary Clinton or Donald Trump becomes the 45th president of the United States, the events in and around the January 20, 2017, inauguration will involve a turnaround time of less than two months. Figuring out how to navigate the tight timeline under unique security and budget circumstances was the topic of a panel titled “What Every Event Organizer Needs to Know About the 2017 Presidential Inauguration” at Elevate D.C., which took place Wednesday at the Ronald Reagan Building and International Trade Center.

The panelists were Occasions Caterers owner and creative director Eric Michael; Steve Kerrigan, the former president of the Presidential Inaugural Committee, who planned both of President Obama's inaugurations; and Hargrove vice president of events Ron Bracco. Here are five insider tips from the panel, which was moderated by BizBash executive editor Beth Kormanik.

Know the difference between official and unofficial events.
The Presidential Inaugural Committee is in charge of all official events—things like the swearing-in ceremony, the parade, several balls, and special events such as a concert and a day of service. More than 2 million invitations can be sent out for official inaugural events in a year, as they were for the 2009 and 2013 balls, Kerrigan said.

“There’s a doorway of vendors waiting to introduce themselves,” Bracco said. “President Obama was the first time [Hargrove was] the general contractor in charge of all the elements, including all technical and the entertainment. It gave us the ability to look at the event holistically and provide that quality through all aspects of the event.”

Unofficial inaugural events—hosted by state societies, corporations, unions, fund-raising organizations, and others—sometimes have the luxury of more time to plan ahead. “[When I started] 30 years ago, [Occasions Caterers] got those calls very quickly after the election,” Michael said. “For this last election, most of our calls came in after Christmas. You’re talking about 20 days to prepare for a party of 2,000 or 3,000 people. I don’t expect it to be any different this year. In fact, I expect it to be a little bit worse.”

Expect over-the-top security.
As a national special security event, the inauguration has intense security requirements that involve federal, state, and local authorities. “I wish it were a dozen agencies [that handle security]. It’s an awful lot more than that," Kerrigan said. "The security planning for that first inaugural was incredibly tight and precise.”

For vendors, that means taking steps like vetting all employees with background checks. “Every four years, it’s a different experience. Every four years, we think it’s the hardest thing we’ve ever done,’ Michael said. “This year, we have every expectation that it will be tighter, more difficult, and timelines pushed forward, perimeters pushed bigger.”

Hargrove built a full-size replica of the inauguration stage for the Secret Service and other agencies to vet in person. “The first meeting is showing the work ahead," Bracco said. "We hope to have the first meeting by Thanksgiving [or earlier]. One of the big goals is that everything has to happen very, very quickly. There’s a lot of new things to learn. We have to get designs out right away, get those designs approved, tweaked, and sent into production.”

Prepare to significantly increase staff.
Hargrove’s staff balloons from 200 to 1,500 including union labor during the lead-up to inauguration events. Similarly, Occasions ramps up its staff from about 500 to as many as 900. The extra staffers are needed to help with the massive demand: In 2009, for the numerous events surrounding President Obama’s first inauguration, Occasions served more than 27,000 people over three days.

Managing that staff requires careful attention to logistics—and creative solutions. “We’ll create a dormitory. We have sleeping bags for about 100 people, or we take hotels rooms early,” Michael said. "We keep personnel within the [security] zone. We stage refrigerated trucks within the zone. We have perishables. Food and labor have to happen in real time.”

Stick to your budget .
Kerrigan said the Presidential Inauguration Committee had a $63 million budget for President Obama’s 2009 inauguration—which it had to raise from donors already tapped during the campaign. Sticking to that budget is crucial, if difficult. Bracco said Hargrove provides options at different price points to give planners options.

Kerrigan said that people should not assume inauguration events are going to be similar, even for a president’s second term. “The Obama inaugural celebrations in 2009 and 2013 were very different. In 2013, we had three official inaugural balls, and we had 11 or so in 2009,” he said.

Look out for red flags.
While it’s generally safe to work on official inaugural events, vendors need to be careful when taking on work for unofficial events. Working with unknown planners who are hoping to launch an event—for fund-raising or for-profit reasons—can be good business or a financial risk. Michael and Bracco cited unreturned calls or a lack of focus in the planning process as signs the event is on shaky ground and not worth pursuing.

In the end, Michael said it’s important for every event planner to remember one thing about inauguration events: “We over-prepare. It’s fun. It’s every four years. We make a party out of it.”