For her first presentation uptown, Stella McCartney chose the Americas Society on Park Avenue, a landmark beauty where the close quarters provided an intimate atmosphere ideal for the restrained guest list and designed to encourage interactivity.

"It's truly the smallest venue we've used for a Stella event," said Owen Davidson, principal with Anne Landy at AO Production, McCartney's long-time New York event production firm. "Stella's events have always had a funky downtown vibe, so we purposefully thought it would be interesting to move it to the Upper East Side with a more serious take on the venue." (However, Davidson did confirm that McCartney's June resort presentation will be held downtown.)

As guests—including Elettra Wiedemann, Alec Baldwin, Anna Wintour, Jessica and Jerry Seinfeld, Jeff Koons, and Frankie Rayder—entered the McKim, Mead & White-designed mansion, moved past a unicorn-shaped ice sculpture and a forest of trees and ascended to the second floor, they found three distinct rooms. Designed as tableaux vivants, the music room, ballroom, and library each offered a unique backdrop for the pre-fall collection and gave the affair the feel of an intimate, elegant cocktail party.

For example, in the music room a pianist entertained guests in a space where the visuals included hundreds of pink mylar balloons strung along the ceiling and walls and a tower of champagne coupes filled with Veuve Clicquot. In the salon Simón Bolívar, three artists sketched models lounging on Louis XV chaise lounges and sipping champagne; the patterns of their geometric print McCartney-designed evening dresses reflected in the antique gilt frame mirrors on the walls. "I used to do live drawing in school," said McCartney, "so I thought, 'why not bring an element of that to the presentation?'"

In the wood-paneled library, models sported McCartney's new sustainable optical collection, looking appropriately studious with a game of Scrabble splayed across an ottoman. Nearby, a showcase of accessories was displayed along an entire wall.

AO Production began the build at 9 a.m. the day of the event and finished the strike by 11 p.m. that night. All the freestanding furniture, with the exception of select pieces in the library, were brought in for the presentation, and light towers were erected in all the rooms. "Lighting was crucial in the ballroom because of the artists' sketching," noted Davidson. However, the tufted walls of the ballroom, along with the sconces and the chandelier, were already in place, and Davidson's team added extra embellishments.

No exterior power sources were brought in for the hair and makeup teams, which took over the second-floor conference room. "There's always less power than you like in an older building—a concern for backstage," said Davidson, who had also looked at the Pratt Mansion directly across the street. Surprisingly, according to the producer, it wasn't more expensive to host the event uptown; the resort 2012 presentation at the New York Marble Cemetery cost around the same, but offered much more flexibility. 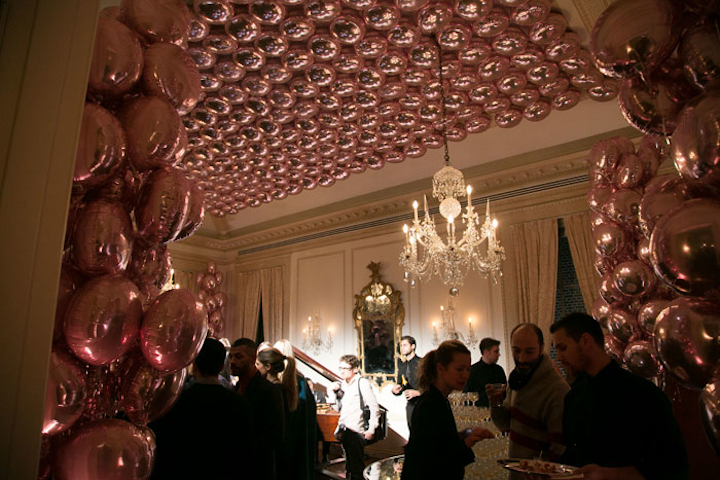 In the music room, hundreds of mylar balloons were strung across the ceiling and along the walls to create an elegant yet festive cocktail party atmosphere. The chandelier and wall and curtain treatments were preexisting elements, while all furniture was brought in.
Photo: David X. Prutting/BFAnyc.com 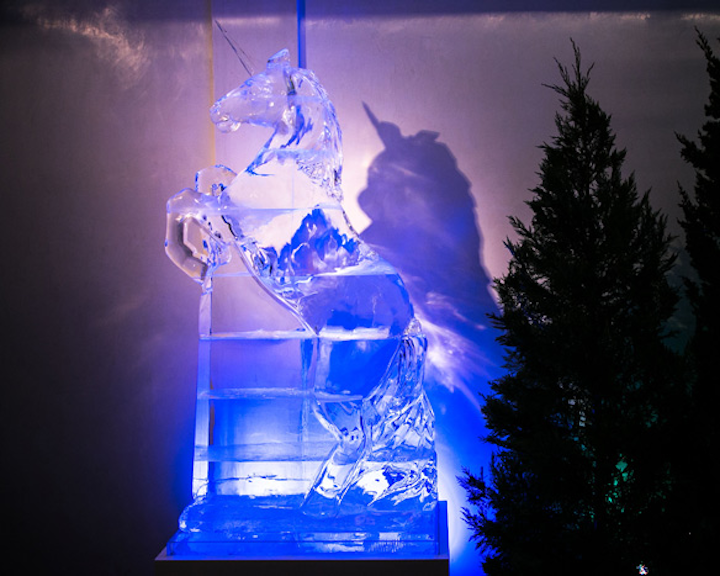 At the entrance to the Americas Society, guests met a unicorn-shaped ice sculpture. "Originally, the ice sculpture was going to be of a horse, but a unicorn had a more whimsical element to it," said Owen Davidson, principal at AO Production.
Photo: David X. Prutting/BFAnyc.com 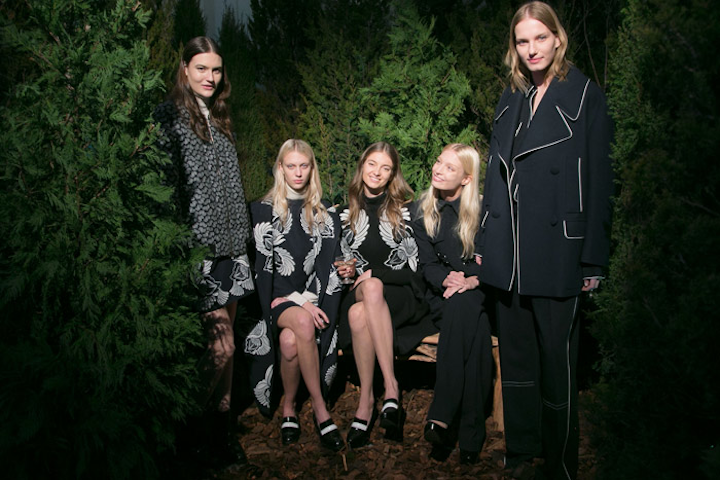 The entrance vignette on the first floor featured a cluster of McCartney's pre-fall designs in a forest of evergreen, hemlock, and birch trees set atop a carpet of pine mulch. Adhering to the venue's decor restrictions, no props could physically touch the limestone floor.
Photo: David X. Prutting/BFAnyc.com 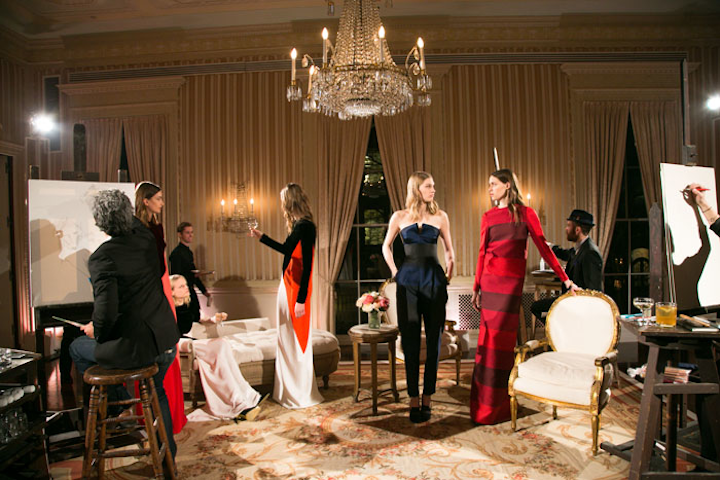 To realize the artists' drawing room in the venue's ballroom, AO Production built a 12- by 16-foot wooden stage that was elevated eight inches off the floor, wrapped in natural muslin, and covered with an antique carpet. Throughout the night, three artists sketched models clad in Stella McCartney's evening dresses as guests seemingly became part of the intimate event.
Photo: David X. Prutting/BFAnyc.com 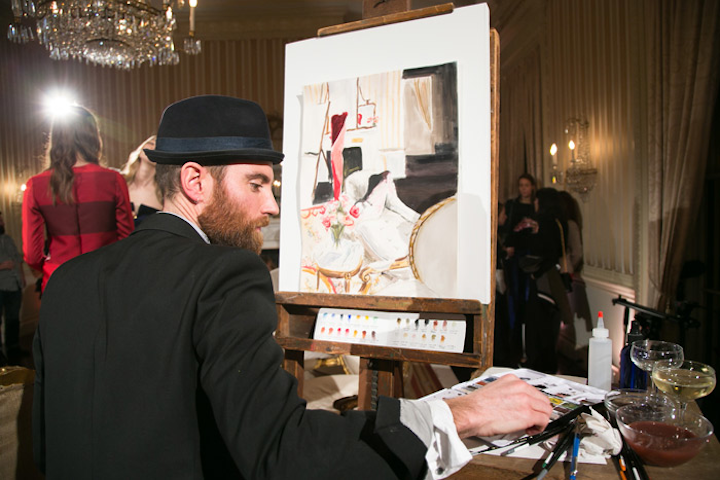 John Gordon Gauld (pictured) was one of the three artists the Stella McCartney team enlisted with the help of Grey Area, an art/retail project that offers artists a venue to explore new ideas and reach new audiences through brand partnerships.
Photo: David X. Prutting/BFAnyc.com 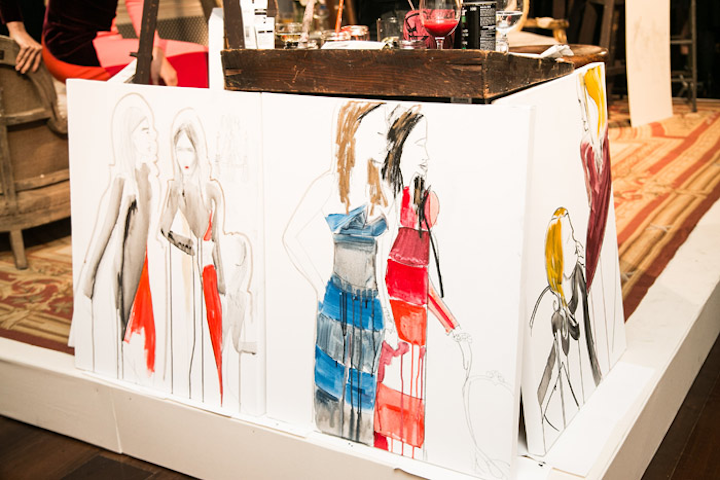 Artist illustrations of models clad in the collection were documented in real time and displayed for attendees.
Photo: David X. Prutting/BFAnyc.com 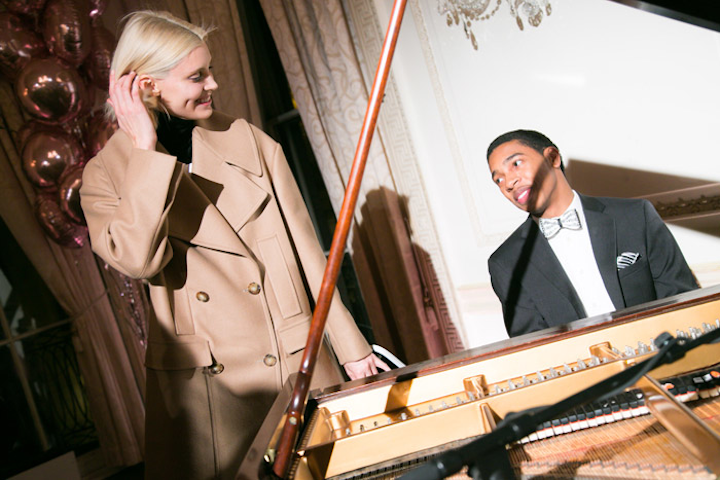 Pianist Christian Sands performed live in the music room. Unlike past presentations, where music has been a central focus, the entertainment was meant to play a more discreet role so as not to aesthetically overpower the garments or the artists in the drawing room.
Photo: David X. Prutting/BFAnyc.com 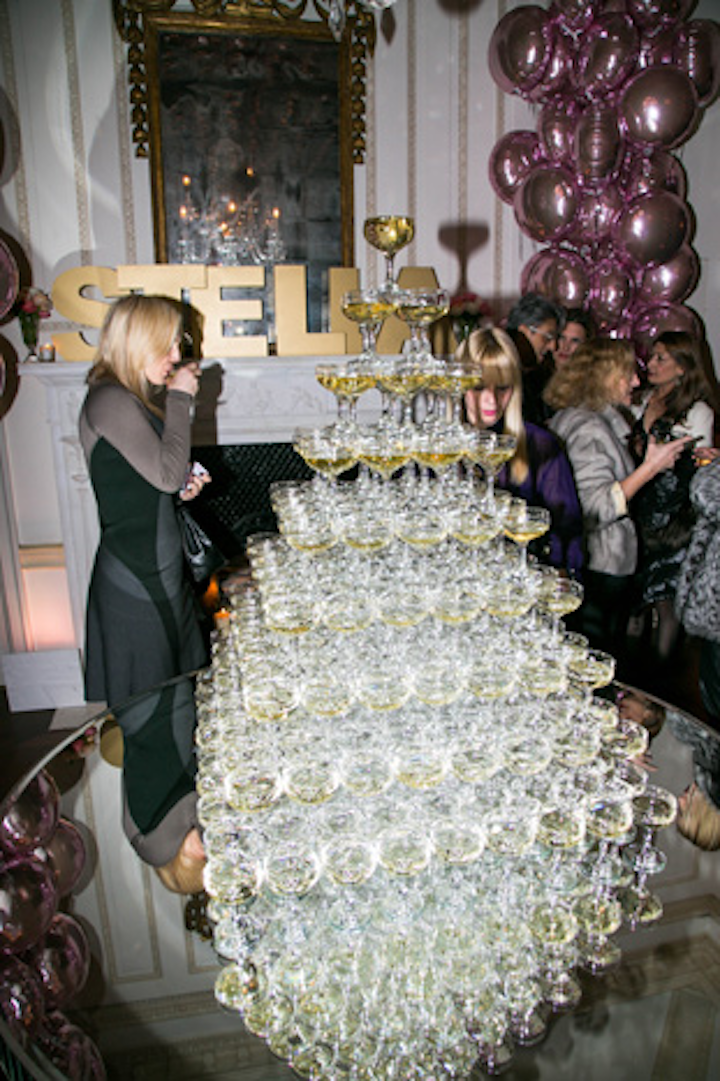 Champagne sponsor Veuve Clicquot, which first partnered with Stella McCartney in December at Art Basel Miami Beach, constructed a tower comprised of 10 layers of champagne coupes that utilized around 36 bottles continually poured to keep it flowing. Veuve Clicquot was also served at the bar and passed on trays. Block letters spelling out "Stella" stood atop the fireplace.
Photo: David X. Prutting/BFAnyc.com 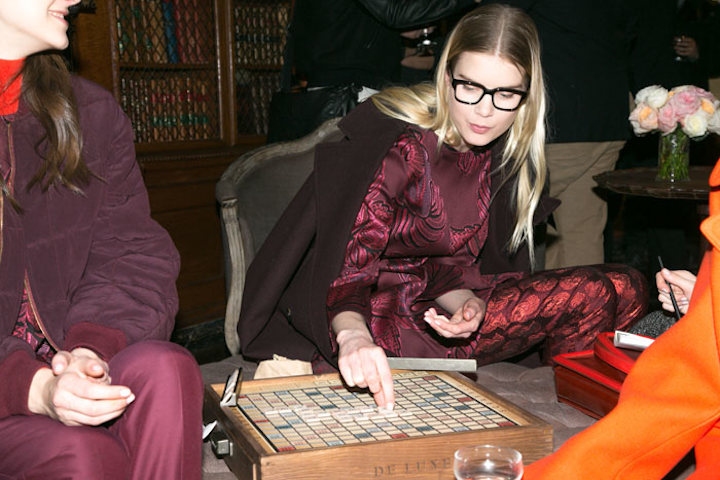 As is customary at Stella McCartney presentations, models are encouraged to interact with guests and the surrounding environment. In the library, models played Scrabble while clad in McCartney's designs, including a pair of glasses from her new sustainable eyewear collection.
Photo: David X. Prutting/BFAnyc.com 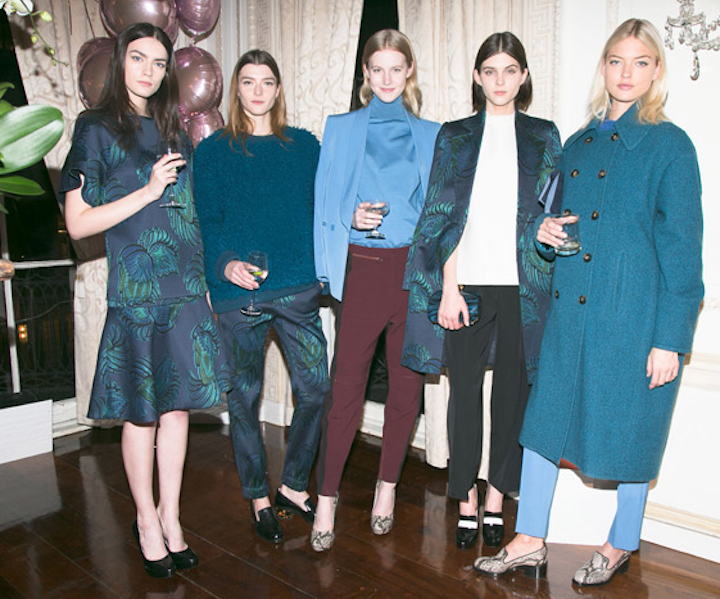 Groups of models, typically color-coordinated, were artfully positioned throughout the first two floors of the venue. Up close and personal, guests were able to examine and feel the garments for themselves and see the pieces in motion.
Photo: David X. Prutting/BFAnyc.com 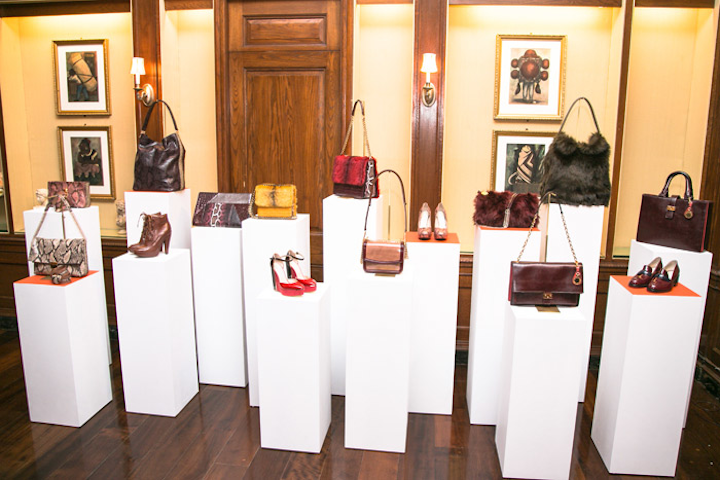