Attendee feedback about wayfinding drove a new layout and look for the developer conference.

Google's founding principles are summed up in a list entitled "Ten Things We Know to Be True," where number one is: "Focus on the user and all else will follow.” That mindset, coupled with concerns voiced by attendees, led organizers of the company’s I/O developer conference to make changes to the layout and design of this year’s event, held May 17 to 19 at the Shoreline Amphitheatre.

The 2016 I/O conference had marked a complete reinvention of the event, with a new venue—Shoreline—and a radical new design inspired by music festivals such as Coachella. But post-event surveys indicated that while attendees found the experience fun, they also found it difficult to locate breakout sessions and other content experiences.

“I think it was truthfully a little more chaotic than we realized," said Amanda Matuk, executive producer of Google I/O. "It was meant to be a discovery around every corner, but we found our developer community doesn’t want that. They want to be surprised and delighted in an organized fashion.”

To address those concerns, this year Matuk used a “city-planning” strategy, creating a Main Street through the middle of the amphitheater’s parking lot with four color-coded zones extending from it. Street signs throughout the space, large numbers on the session tents, and several eight- by eight-foot maps also made it easier for the nearly 10,000 developers, partners, and Google staff to navigate from one activity to the next.

“This audience cares about functionality and making sure things work and are situated in a way that benefits the learning and the technology over the aesthetic, which sometimes as event marketers we like to focus on,” Matuk said.

Also new this year, organizers amped up their efforts to engage the event’s global audience, known as Google I/O Extended. About three million people experienced the event online and at more than 600 events around the world. Matuk said this year Google worked more closely with developers that hosted those events, helping them line up local speakers and providing decor so their gatherings had a clearer connection to what was taking place at Shoreline.

In past years, remote viewers just could watch a live stream of the keynotes and breakout sessions. For the 2017 event, Matuk added four teams of “live guides”—pairs of reporters and camera operators who traveled around the event, providing a live look at some of the other experiences.

“What we found with the online community is they get great content, but they don’t get to see the hands-on stuff, and that’s often what’s most inspiring for these folks,” she said. “So we’re doing this as an experimental thing to try to get more engagement on the non-session content.” The guides also shared live streams from the evening parties and responded to requests of what to show that viewers submitted through Twitter and other social channels using the hashtag #IO17. 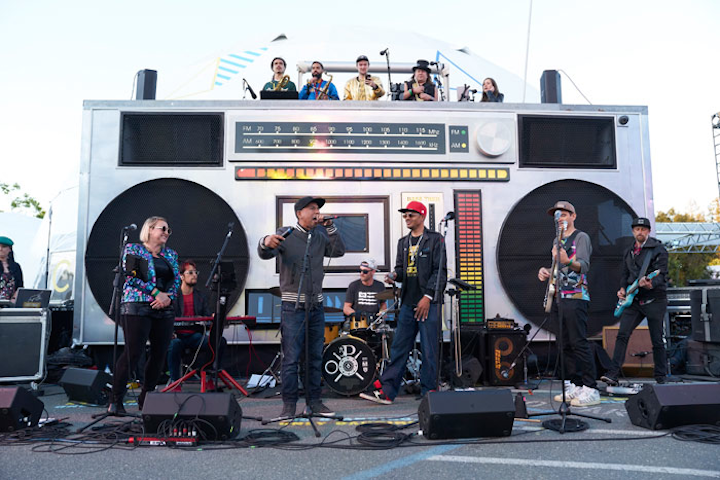 A massive boombox served as the backdrop for a hip-hop band and DJ at the Block Party on the first night of the conference. The event included additional entertainment, an arcade, a virtual-reality movie experience, food, and more.
Photo: Courtesy of Google 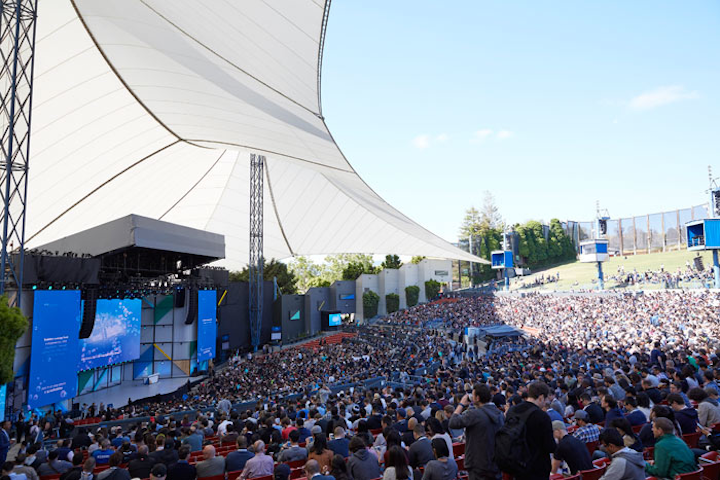 The amphitheater housed the keynotes and large breakout sessions. The rest of the conference took place in structures set up in the venue's parking lot.
Photo: Courtesy of Google 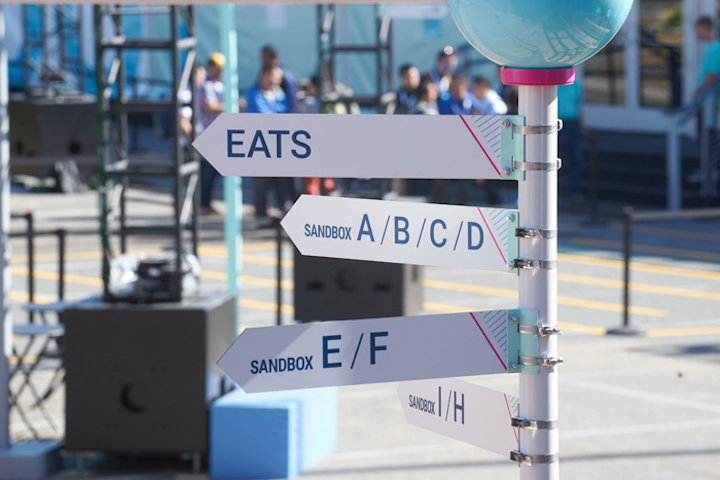 Based on feedback from the 2016 event, organizers added more wayfinding tools, such as signposts and maps.
Photo: Courtesy of Google 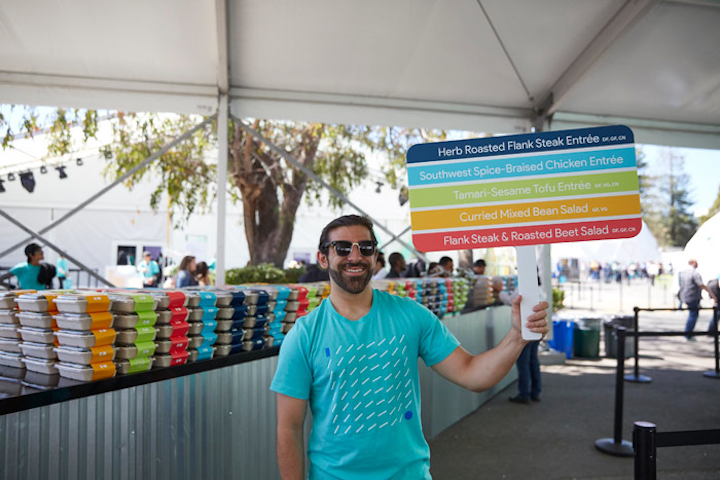 To improve the flow of attendees through the food area, staff held color-coded menu signs that corresponded to the colors on the packaged food. Matuk said the system worked well and allowed 7,200 people to be fed in 45 minutes.
Photo: Courtesy of Google 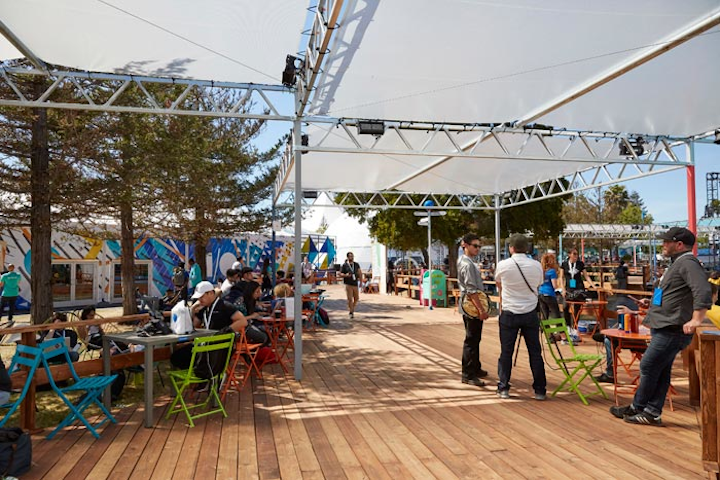 After dealing with extreme heat in 2016, this year organizers created 30,000 square feet of shaded areas outside the session structures.
Photo: Courtesy of Google 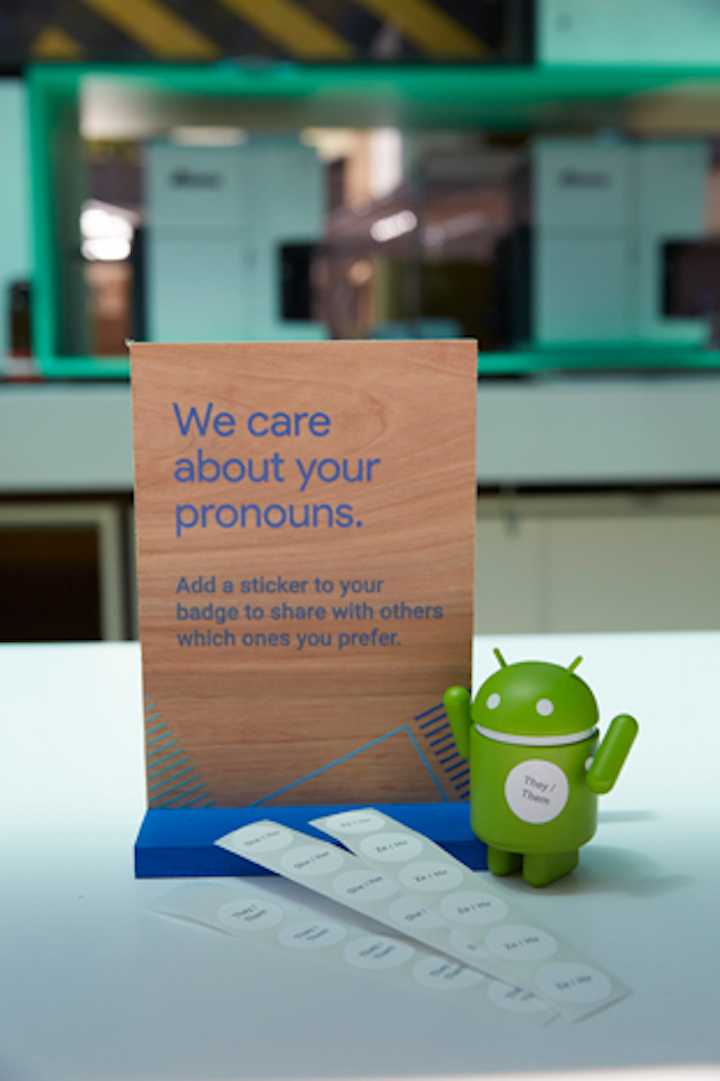 To foster inclusivity, Google invited attendees to add stickers to their badges to indicate which pronouns they prefer to describe themselves.
Photo: Courtesy of Google 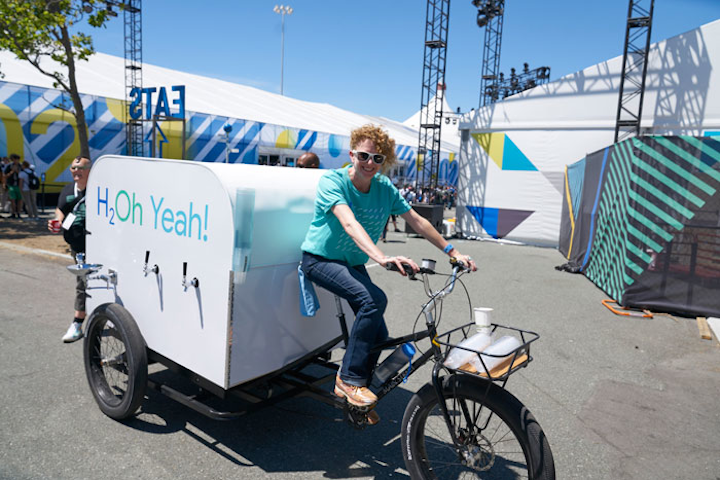 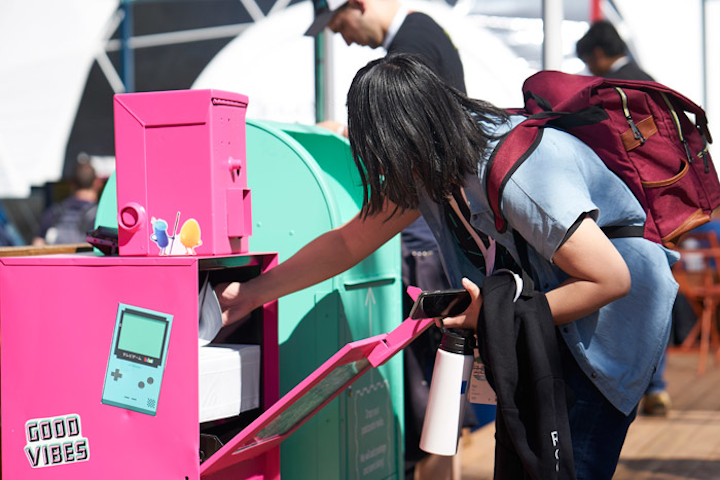 Organizers provided pre-stamped postcards and invited attendees to write a note to a colleague, friend, or family member and drop it into one of the mailboxes located around the event. Matuk said the purpose was to create a “nice human, analog moment in a digital, tech-forward environment.”
Photo: Courtesy of Google 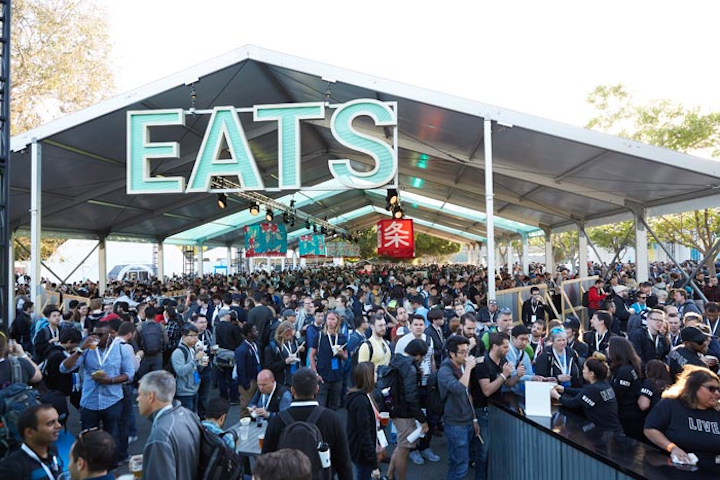 This year organizers created the “Eats Market,” a large pavilion where they served lunch each day. Matuk said this worked much better than their system in 2016 when they had 15 food stations spread through the event.
Photo: Courtesy of Google 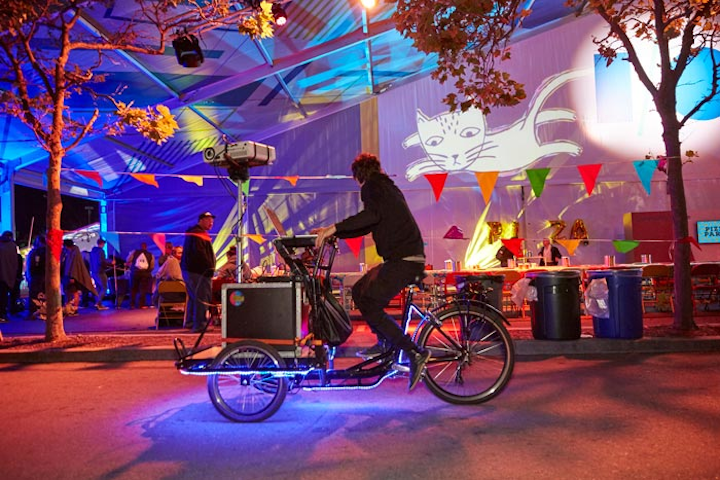 The large tents that housed sessions during the day became canvases for pop-up artwork during the opening night Block Party. Cyclists with projectors mounted on their bikes would stop to show a scene or short film on the side of the tent.
Photo: Courtesy of Google 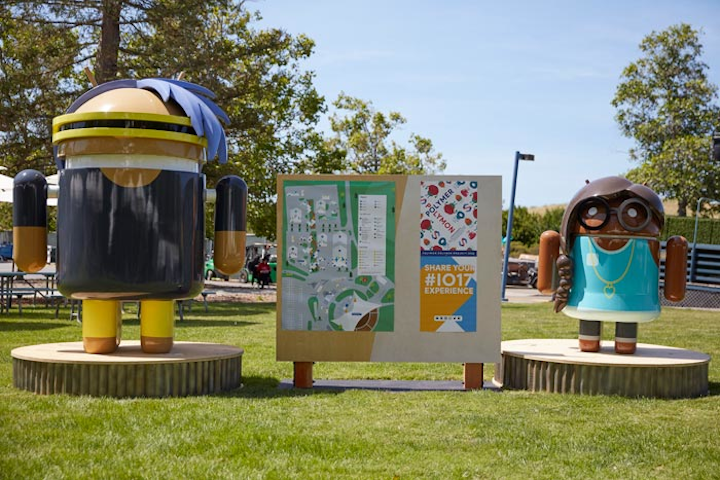 Organizers prominently displayed large "you are here"-style maps throughout the venue. The back of each map was a community billboard where they posted updates about sessions and after-hours events.
Photo: Courtesy of Google 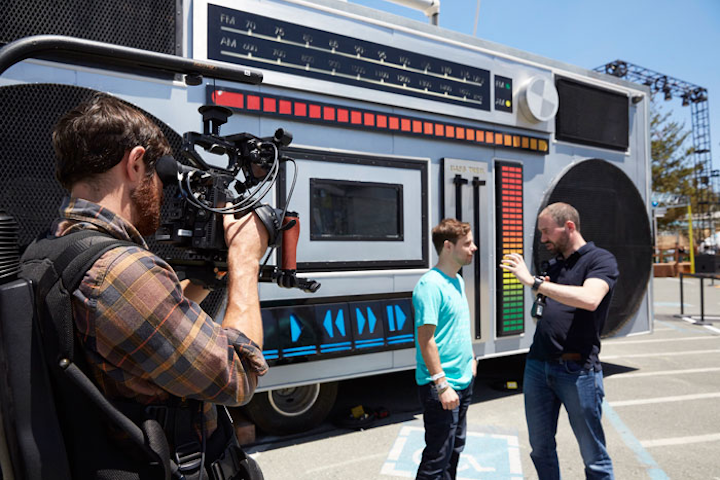 Four “live guides” traveled around the event with a camera person to provide content for the online audience. The majority of the content was pre-selected by Google, but some was based on questions and requests submitted via social channels.
Photo: Courtesy of Google 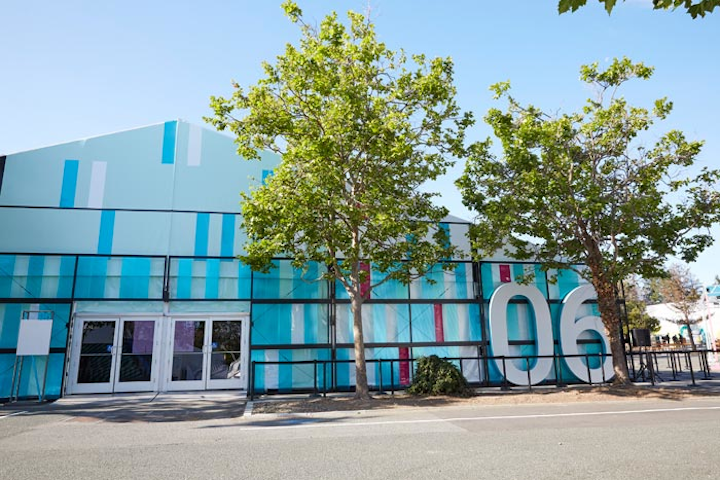 The colorful tents from 2016 returned, but this year organizers numbered them to aid with wayfinding.
Photo: Courtesy of Google
More in Programming & Entertainment