A New Way to Encourage Twitter Activity at Events?

AT&T inflates a balloon at the same pace it receives tweets, with a prize for the Twitter user who causes it to pop. 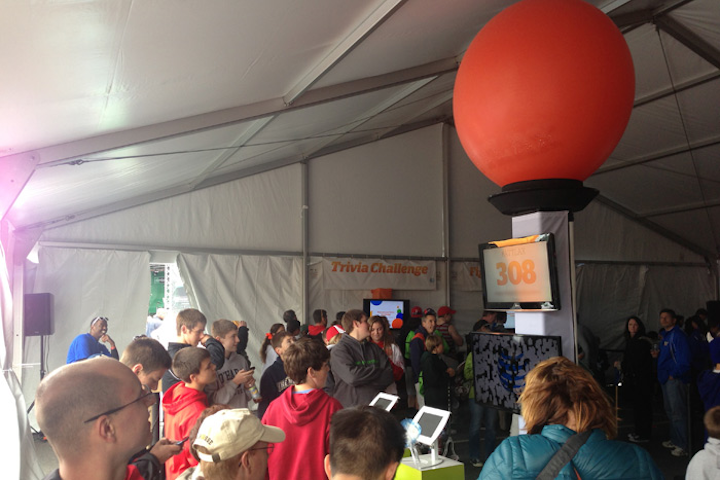 Crowds gathered inside AT&T's tent at the N.C.A.A. Lacrosse Championships in Philadelphia in May to watch the company's "Twitter balloon" gradually inflate as people tweeted using the hashtag #ATTLAX.
Photo: Courtesy of Team Epic

Twitter is an essential tool for top brands to engage with customers, with 97 percent now using it compared to just 62 percent in 2011, according to Bandwatch. At events, Twitter helps companies carry their messages beyond the in-person audience to millions of people around the world.

Team Epic manages corporate sponsorship and experiential activations for brands such as AT&T. In an effort to find an innovative way to encourage tweeting at AT&T-sponsored events, the company worked with Brightline Interactive to develop what it calls a “Twitter balloon”: A balloon six feet in diameter connected to an air compressor that is activated by tweets with a particular hashtag.

“There are a lot of Twitter walls that show tweets as they come in, but this performs a physical action and it happens within less than a second,” said Andrew Knutson, manager for Team Epic. "As soon as you tweet, you hear the air going to the balloon, which is pretty cool. You’ll see crowds forming, especially as the balloon gets bigger."

AT&T unveiled the balloon at the N.C.A.A. Final Four men's basketball championship last spring and has since used it at events such as the Outside Lands Music & Arts Festival in San Francisco, the College World Series in Omaha, CMA Music Festival in Nashville, and Music Midtown in Atlanta. Signage at the events encourages attendees to tweet with a particular hashtag. Each tweet triggers a burst of air into the balloon, and the person whose tweet causes the balloon to pop wins a prize such as an AT&T phone.

The system is powered by a computer that monitors the tweets and is connected to a device called a DMX controller. “That’s the bridge,” Knutson said. "It takes the digital piece and says, 'do something physical.'" In this case, the action is to trigger the air compressor, but Brightline C.E.O. Erik Muendel said the system could activate other effects such as sounds, lights, and smoke.

The setup also includes a counter to track the Twitter activity; Knutson said it takes anywhere from 200 to 700 tweets to cause the balloon to pop.