Why This Food Event Needed a 2,400-Square-Foot Dance Floor

The Rammys, which honor professionals in the food and beverage industry, prepared their venue for a crowd. 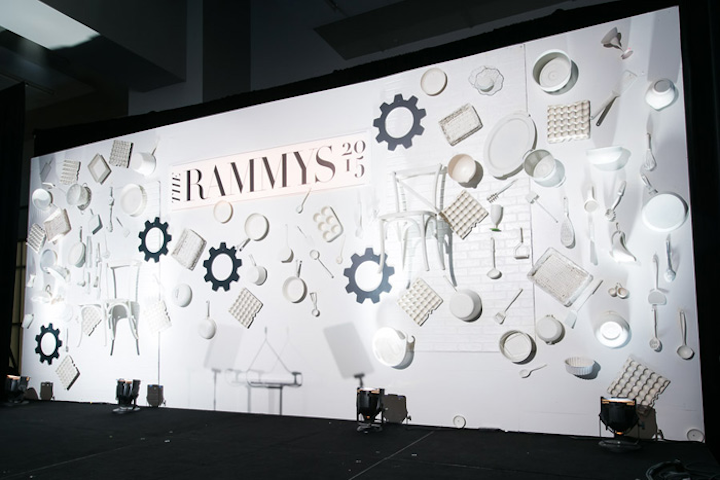 Design Foundry used silver cooking utensils along with pots, pans, and platters to adorn the backdrop for the stage.
Photo: Tony Brown/imijphoto.com for BizBash

The Restaurant Association of Metropolitan Washington’s annual Rammy awards are composed of two parts: an award ceremony recognizing talent in the food and cocktail industries and a blow-out dinner and dance party. The latter has become such a widely talked-about and anticipated affair that event producer Roger Whyte had unique set of challenges—and expectations—to address for the 33rd annual event on June 7.

Attendance grew to 2,000 people with the event selling 100 more tickets this year. Since the post-awards dinner party returned to the same ballroom at the Walter E. Washington Convention Center as in 2014, Whyte had to get creative with the room layout to accommodate the additions without losing the 690 linear square feet of buffet needed to keep lines moving at the food pavilions.

“Last year we had those huge decor installations, and this year we cut those down to a smaller footprint,” said Whyte, who worked with Design Foundry to change the shape of the pavilions from square to oval and use serpentine tables. “It provides the same effect but won’t take as much space, which gives us the footage back for people and tables.”

But the food and drink alone are not all the guests come to enjoy. Last year Whyte and his team at RJ Whyte Event Production noticed guests spilling off the dance floor, an issue he sought to correct this time around.

“We thought it was big last year but saw people dancing on the carpet,” Whyte said. “We expanded it to the max size the venue can provide at 2,400 square feet.”

Additionally, Whyte moved the DJ booth and four surrounding bars from the center of the floor to a linear layout against the back wall of the ballroom. He also eliminated the stage and live band from last year, opting to have DJ Neekola perform from her raised booth above the bars throughout the entire party. “This crowd loves to party and they want to dance, so we played to that,” said Whyte.

Here's a look at how it all came together.