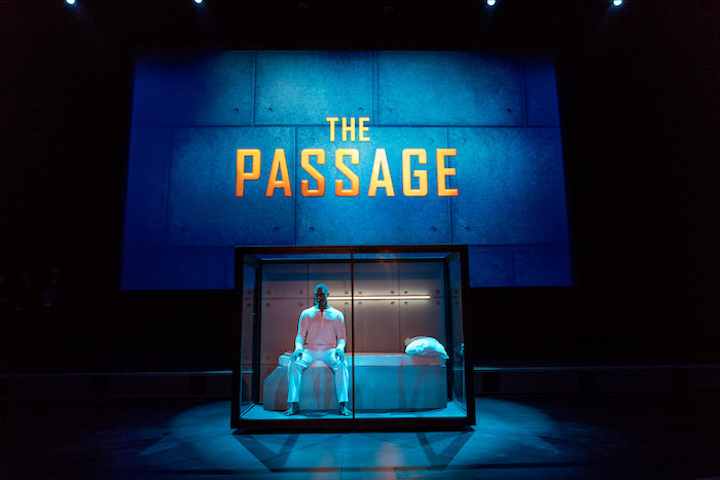 Fox hosted the premiere party for its new sci-fi drama The Passage on January 10 at the Broad Stage in Santa Monica. Designed and produced by Russell Harris Event Group, the event took guests inside the show's secretive Project Noah, a medical facility housing a dangerous virus. A creepy vignette before the screening depicted the facility's experiments; at the after-party, guests could pose for photo ops in similar custom-made cells. Other on-theme details included medical props and florals placed in beakers.
Photo: Dan Scott/American Image Gallery

Welcome to BizBash’s new Los Angeles-based column, where West Coast bureau chief Claire Hoffman recaps the week’s biggest local news. We'll be away next week, but as always, we'd love to hear what you're working on. Get in touch!

Moves & Milestones
Steve Tadlock has been named executive vice president and general manager of the Banc of California Stadium, where he'll be responsible for all facility operations and event production for festivals, sports, and special events.

The 889-room InterContinental Los Angeles Downtown has hired Niles Harris as general manager and Sunny Saha as director of food and beverage.

Los Angeles had a record number of visitors in 2018, welcoming 50 million people—1.5 million more than the previous year.

In Case You Missed It
In the wake of the Kevin Hart controversy, we asked event pros if the Oscars would actually be better off without a host. We also highlighted some new ideas for entertaining in Los Angeles and posted our list of the 15 most innovative meetings (check out the L.A. event at number one!)

In the News
SAG-Aftra has accused the Academy of Motion Picture Arts and Sciences of intimidating actors so they present only at the Oscars during award season. The union said the Academy puts “extraordinary and unwarranted pressure” to keep actors it wants to present at the ceremony from presenting at the upcoming SAG Awards. The Hollywood Reporter: "A similar skirmish is ongoing between the producers of the Golden Globe Awards and the Academy. People close to the production of Globes are furious that the Academy interfered with their recruitment of presenters at the Hollywood Foreign Press Association’s January 6 ceremony.” https://bit.ly/2Ma9qqp

The Los Angeles Department of City Planning is hoping to shorten the wait time for liquor licenses. Eater: "A new Restaurant Beverage Program will aim to 'reduce processing times and costs for certain sit-down restaurants who wish to serve alcoholic beverages at their establishments.' ... According to the DCP, it costs from $12,500 and takes an average of six months for many approvals. But restaurant/bar expert and FE Design and Consulting owner Eddie Navarrette tells Eater that wait can often balloon to anywhere from eight to twelve months." https://bit.ly/2T0RW2u

Glaad has partnered with publicity and event firm Slate PR for this year's 30th anniversary Glaad Media Awards. The Hollywood Reporter: "The organization will host two ceremonies this spring, one on March 28 at the Beverly Hilton in Los Angeles and another on May 4 at the Hilton Midtown in New York. ... Slate PR will be charged with all public relations, red carpet, and talent wrangling leading up to and during the awards event. Company partner Andy Gelb and his staff, including Shawn Purdy, Lindsey Brown-McLravy, Rachael Trager, and Elyse Weissman, will oversee." https://bit.ly/2TWzurI

Surprise Event Metric of the Week
$68.2 million—the amount of money the star-filled Elton John AIDS Foundation's annual Academy Awards viewing party has raised. This week, the nonprofit announced that the 27th annual event, taking place on February 24 at West Hollywood Park, will feature a performance by The Killers. Crumble Catering will provide dinner, and presenting sponsor IMDb will live stream from the event for the first time.

Venue Buzz
For events near U.S.C., Bacari West Adams opened this week after a monthlong hiatus for renovations. Previously called Bacaro L.A., the 1,800-square-foot, 70-seat space now has a fully renovated interior that was inspired by Italian wine dens, and a new menu of Mediterranean-inspired, Italian-style tapas. A liquor and full cocktail program will launch in the coming months.

Overheard
"I love a good late-night television comedian, but the Oscars celebrate film. So I think the more you have movie stars involved with the Oscars, the better.”

—Former Oscars producer Bruce Cohen, discussing why the award show may benefit from having a series of celebrities split hosting duties, rather than having one specific host.

On the Scene
We checked out a new 12,000-square-foot immersive experience for the upcoming James Cameron film Alita: Battle Angel. Using custom technology, interactive games, and props and sets from the movie, the activation creates friendly competition through puzzles and challenges that tie into the film's futuristic setting. The space will open in downtown Los Angeles starting on January 23 (a closing date has not yet been announced); simultaneous experiences will take place in New York and Austin.

What's Next
The third local edition of the Women's March takes place Saturday, kicking off at 8:30 a.m. from Pershing Square with speakers including Mayor Eric Garcetti, attorney Gloria Allred, and actresses Laverne Cox and Laura Dern. Organizers—who stress that the local march is not run by the planners of the national Women's March—expect about 250,000 attendees. The Daily News has a preview of what to expect: https://bit.ly/2Cr0GHR

Looking into next week, the L.A. Art Show kicks off on Wednesday night with a gala hosted by Kate Beckinsale. Taking place at the Los Angeles Convention Center, the evening will honor Gavin Rossdale and raise funds for the St. Jude Children's Research Hospital. This year's art show, which runs from January 23 to 27, will have 200,000 square feet of programming, featuring more than 100 galleries from 18 countries.

Look for our next column on February 1.