TomLeader
BizBash’s seventh annual Meeting and Event Style Show attracted a record number of event planners, exhibitors, and industry personnel to Pier 94 on November 8. The show, held in partnership with Meeting & Conventions magazine, provided the chance for attendees to gather, network, and find new ideas through education sessions, lunches, exhibits, and a cocktail reception. And it lived up to this year’s theme: “Your Next Great Idea Starts Here.”

Bobby Taylor of Taylor Creative Inc. magically transformed the Unconvention Center, Pier 94, into a festive, welcoming environment. First Protocol provided event, education, and entertainment management services. Design Fusion provided beautiful entrance floral arrangements, which were placed on tall pedestals, and Atomic Design Inc. provided the main event-space decor, stages, and the honeycomb wall behind the registration area. GES Exposition Services served as the show decorator, providing exhibition and event services. Party Rental Ltd. supplied innovative glassware, catering supplies, tables, and chairs for the show. The day was captured on film and posted online by Brightroom, a sponsor and the official show photographer.The action-packed day started at 7:30 a.m.. with registration provided by E-vents Registration. Got Schwag?, a provider of promotional items, supplied the show bags. Planners attended many educational sessions and roundtable discussions throughout the day, on topics ranging from marketing, design, and decor trends to legal issues and going green. Show sponsor Machine Dreams provided its audience-response system for the education session “Marrying Your Brand Design and Your Budget.” All sessions were well attended and played off the “Next Great Idea” theme.

Elliott Winick, founder of Winick Productions, was honored for more than 35 years of producing special events in New York, including his role as co-founder of the Five Boro Bike Tour. Finally, Elisabeth Familian, current president of BizBash Los Angeles and chairwoman of Masterplanner Calendar, was honored for her work as publisher of Inside Events magazine and as founder and C.E.O. of Masterplanner Media. All of BizBash’s Hall of Fame inductees have contributed in significant ways to further the events industry, and BizBash is proud to honor their achievements.

The general session in the main event room, sponsored by American Express, provided both entertainment and education for attendees. As the crowd gathered, they were treated to the sounds of Electric Junkyard Gamelan, a high-energy musical spectacle provided by BongarBiz. The band uses musical instruments made solely out of recycled materials. Air Dimensional Design provided air columns in the main event room with show sponsors, logos, and directional information. Cami Spectrum presented the Parsons Dance Company, who entertained the capacity crowd with interpretive dance.

BizBash president Richard Aaron kicked off the session proper with the introduction of Gwen Lipsky, founder of SoundthinkingNY, whose presentation on “Gen 2.0” detailed how the new generation of event planners communicates through text messages, blogs, and social networking Web sites. “One thing is for sure: What I tell you today will not be true next year,” Ms. Lipsky said, referring to the speed at which communication channels are changing. The presentation concluded with a text message survey conducted with Zoomerang, the official measurement tool of the show. Cort Event Furnishings sponsored the general session. Following the general session, a group of students and young professionals fielded questions from the audience about the next generation of event planners and how they use trends and technology to communicate.

The trade show floor opened promptly at 11 a.m., and attendees crowded the floor to see the latest products and services from industry suppliers. More than 300 exhibitors showcased their venues, entertainment companies, catering talents, and corporate gift offerings, to name just a few. Excitement was evident all over the show floor as vendors met with current customers and made new contacts.

One exhibitor, Bedazzle My Bon Bons, offered samples of delectable chocolate truffles coated in edible glitter. Crumbs Bakeshop presented amazing cupcakes in various sizes. Entertainment companies like BongarBiz showcased their entertainment services in their booths and throughout the show. Heartland Brewery, Flatotel, and the Inn at Woodstock offered planners a wide variety of venue options, from a restaurant or hotel in the city to a corporate retreat in Vermont. Corporate gift suppliers such as Rao’s Specialty Foods, Montblanc, and Kkooll Collections (a distributor of Akkal Moroccan ceramics) showcased their corporate gift lines. PBG Event Productions created four uniquely styled event themes in their booth and invited visitors to vote for their favorites.

Noteworthy booths included Site NY, event producers who created an amazing room that gave the appearance of being on an angle, with a skewed perspective. Love Plates, Casafina presented its collection in hanging plastic holders linked together vertically, which created a wall of plates inside the booth space.

New at the show this year was BML Blackbird Theatrical Services, which provided audiovisual services, lighting, and plasma screens in the main event room. Attendee Mark Felix of Drury Design Concepts won a plasma TV provided by BML Blackbird in a raffle. Also new to the show was Drive 495, a private club in SoHo, which can be rented for corporate events. National Event Connection presented Union Band, who performed during the networking luncheon.

A networking luncheon by Hudson Yards Catering was held at the rear of the show floor and was open to all event and meeting planner attendees. Delicious food was served on environmentally friendly, compostable plates and utensils provided by StalkMarket.

The Flower Council of Holland, a show sponsor, presented a well-attended session showing how flowers contribute to event decor in a stunning design presentation.

From 4:45 until 6 p.m., attendees were treated to a “High Tea and Highballs” cocktail reception, with catering by Great Performances. A four-piece string quartet represented by Craig Scott Entertainment played during the high tea, and Raf Astor, a Latin band, entertained the crowd on the rear event stage during the highballs reception, courtesy of BongarBiz.

Exhibitors had been invited to a preshow party hosted by the Fred Seidler Group at Terminal 5 that coincided with Terminal 5’s grand opening party on November 7. The event featured a dazzling array of gourmet cuisine and innovative decor, and three hours of entertainment that showcased the venue’s acoustics, state-of-the-art sound and lighting, and 40-foot ceilings.

BizBash would like to thank our exhibitors, sponsors, and attendees, who made the event a tremendous success. The seventh annual BizBash M&C Meeting and Event Style Show proved to be the largest, most well-attended show in BizBash’s seven-year history. For those who can’t wait until next year, please visit BizBash.com to find out about our upcoming shows in Toronto and Los Angeles. We’ll see you next year! 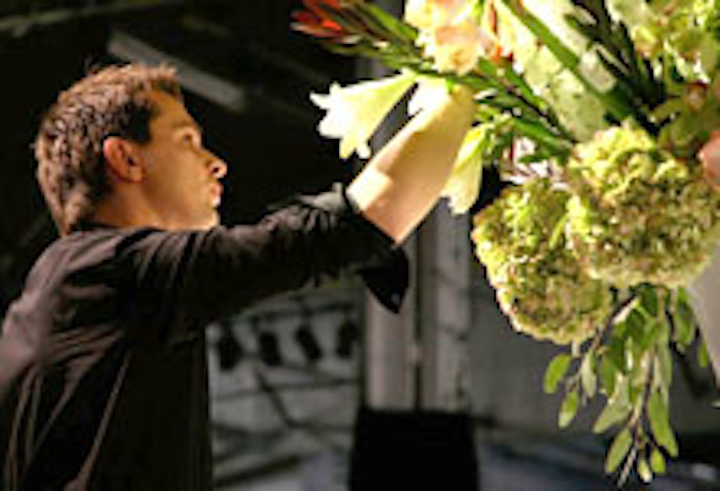 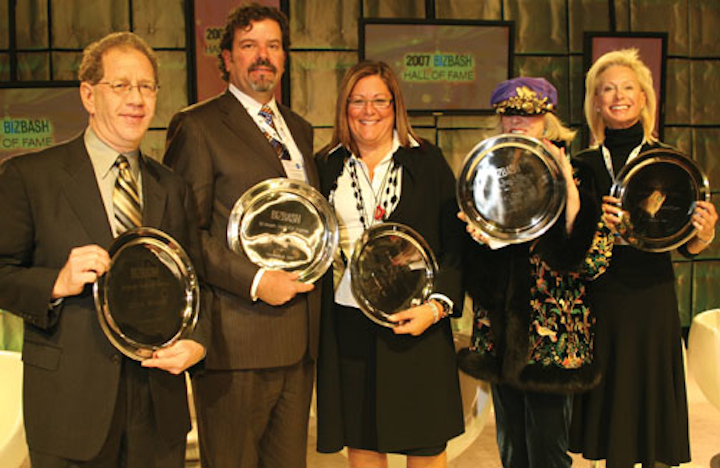 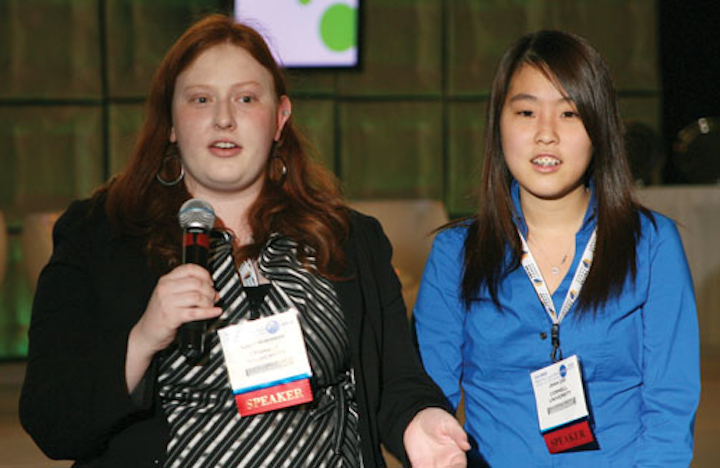 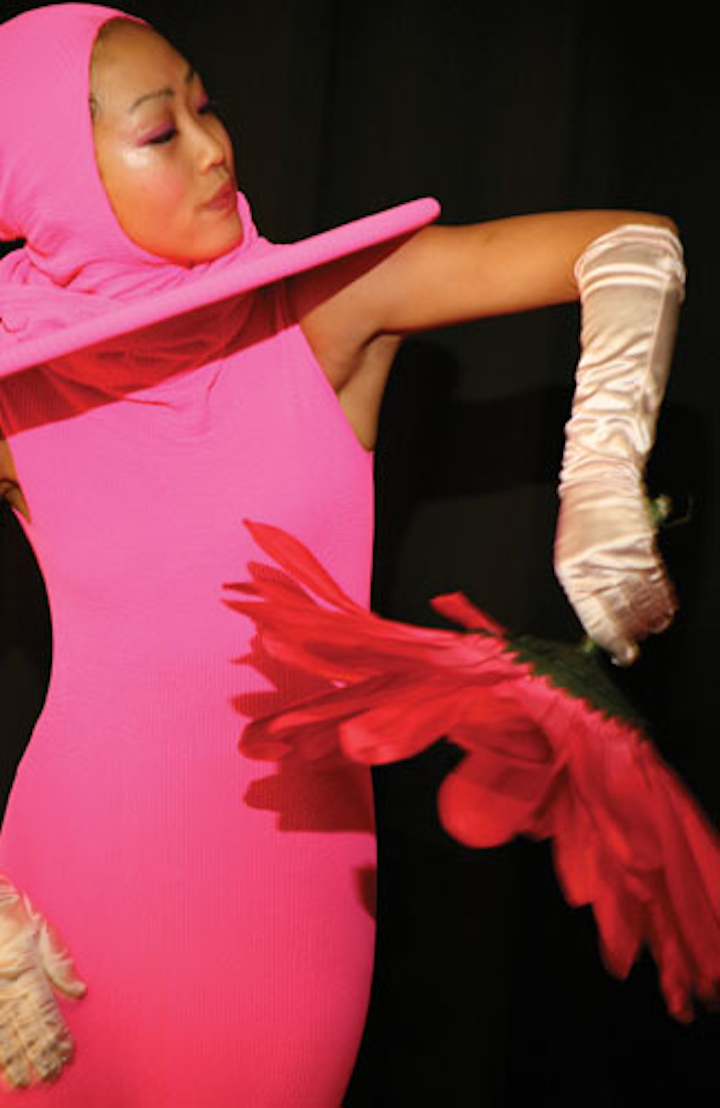 Shir Dance, represented by Bongar Biz, welcomed the crowd as they entered the main event room for the general session.
Photo: Brightroom Inc. for BizBash 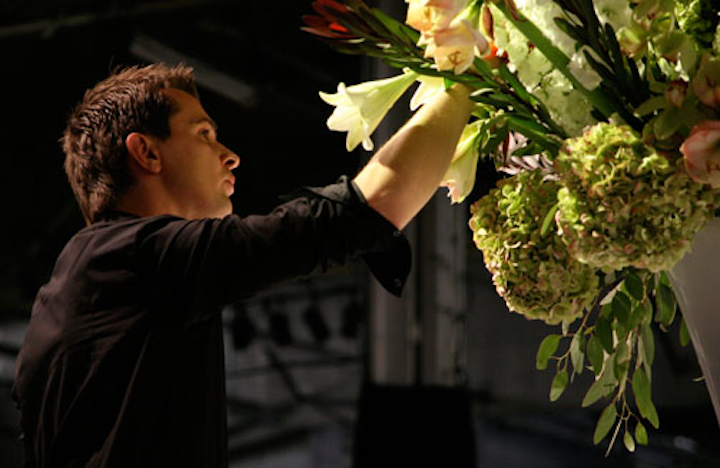 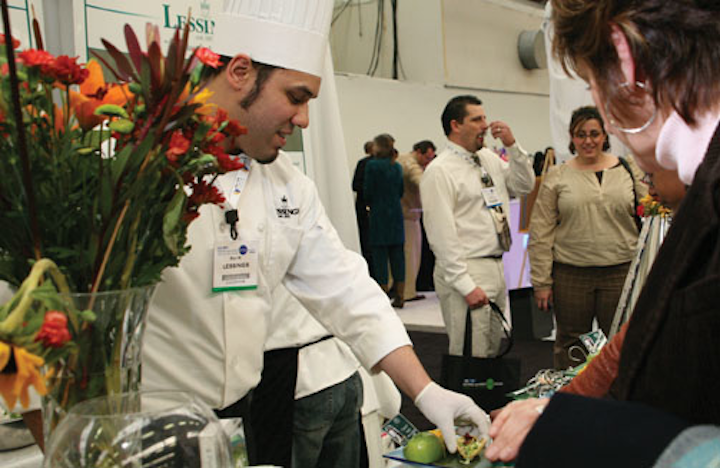 Lessing's provided delectable samples from its menu to planners on the show floor.
Photo: Brightroom Inc. for BizBash 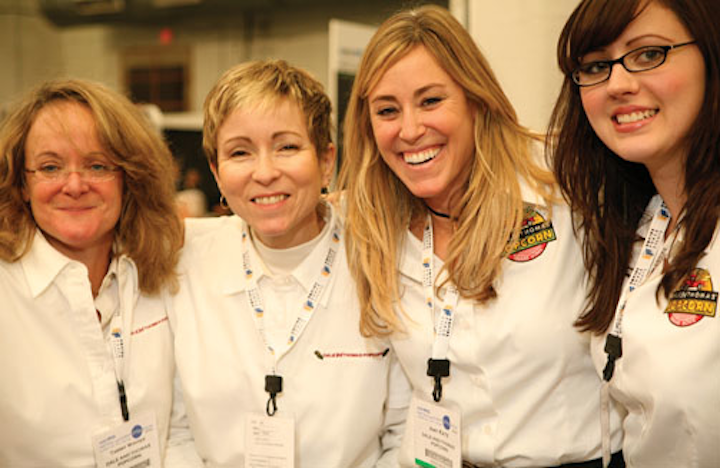 Booth personnel from Dale and Thomas Popcorn took time out to pose for a group shot.
Photo: Brightroom Inc. for BizBash 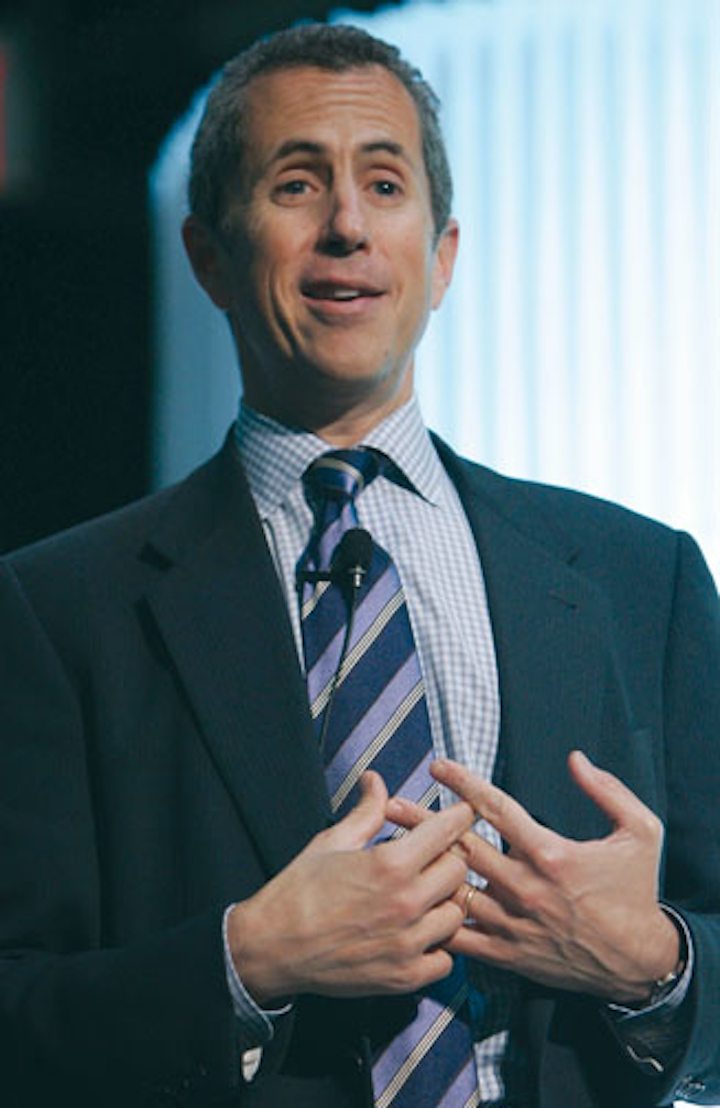 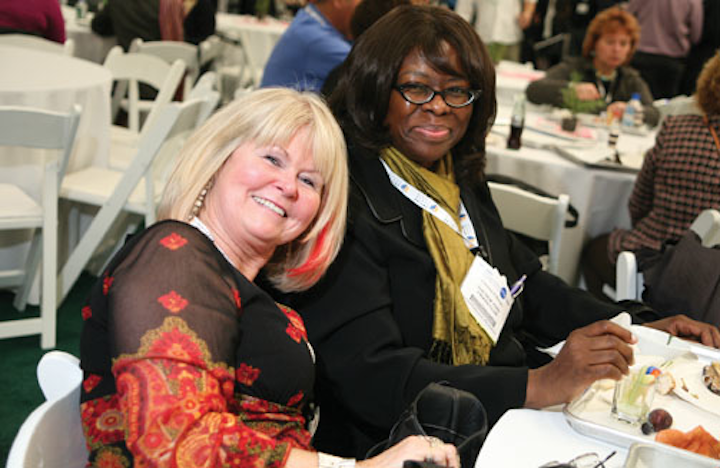 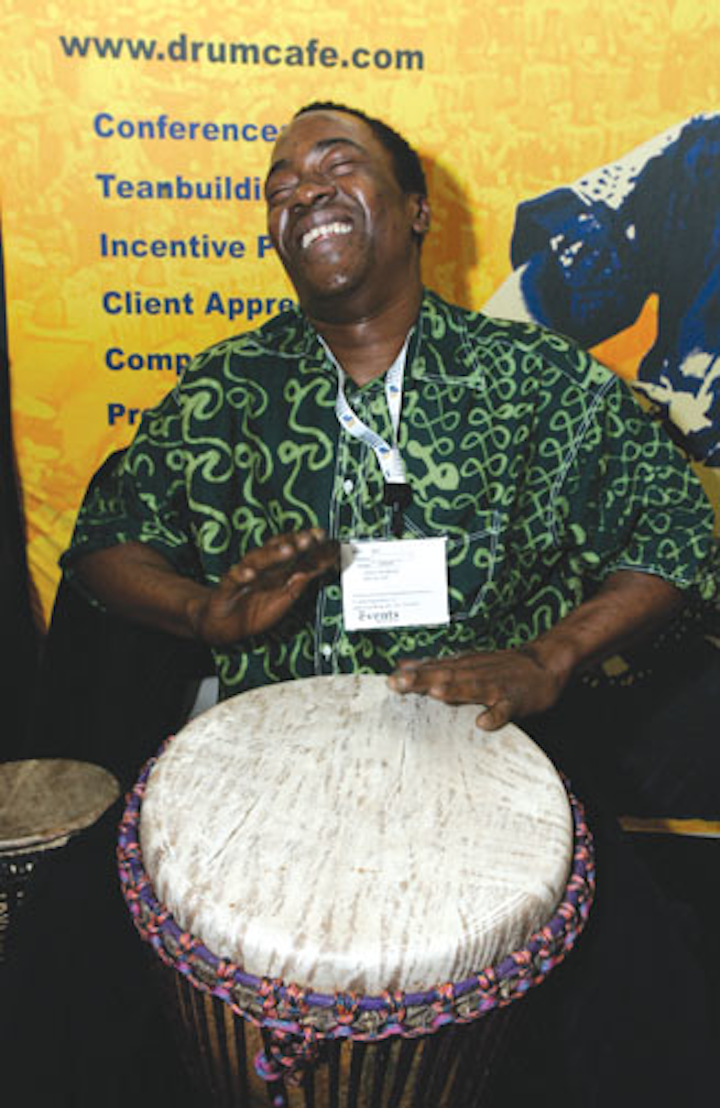 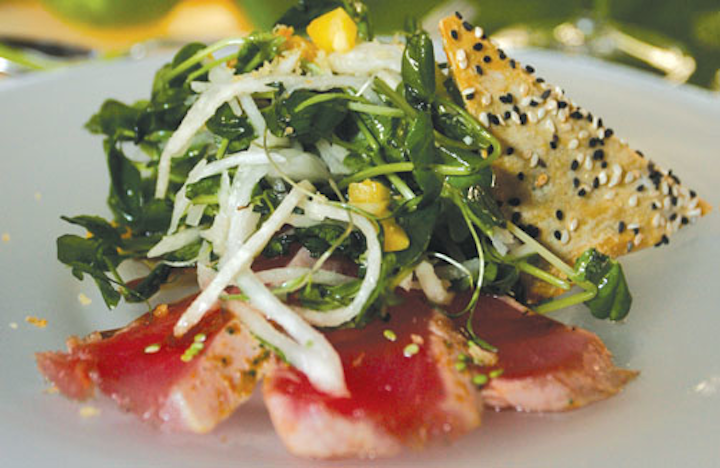