Here's a look at what's on tap for the upcoming season of big benefits.

Ready or not, fall is on its way. And with the swirl of summer benefits behind us, it's time to focus on the upcoming season of big-name fund-raisers. Here's a look at what's in store for decor, entertainment, and more at autumn's preeminent fund-raisers.

Technology-driven decor
A modern aesthetic will pervade Columbia College Chicago's Open Doors Gala on November 9. Honoring Allen Turner, the immediate past chairman of the board of trustees and a contemporary-art enthusiast, the event will "have a very contemporary look that's in line with Turner's aesthetic," Event Creative designer Jeffrey Foster says. The decor will be "technology-driven" with LED-lit curtains and centerpieces with tucked-in lights that allow individual flowers to glow. The entertainment will comprise an eight-member "band" made up of Columbia College students, who will bring their computers onstage to make sounds that form a modern type of orchestra.

The Celestial Ball for Chicago's Adler Planetarium on September 7 will also make heavy use of technology. With a futuristic theme of "Infinite Horizons," the evening will use video displays to simulate an outer-space atmosphere. The videos were created by the planetarium's curators.

In Boston, the inaugural David Ortiz Children's Fund Gala will take place at the Four Seasons Hotel on September 16. Honoring the Red Sox player's Dominican Republic heritage, the event will include an island-theme cocktail reception and live Latin music and dancing.

A similar theme will grace the Joslin Diabetes Center's September 26 benefit, called "Ritmos de Salud," at the Artists for Humanity EpiCenter in Boston, with decor from AE Events. There will be performances from Venezuelan musician Gonalzo Grau and the Salsa Matei Dance Company. The culinary chair is chef Jose Duarte of Taranta. The format of this year's fund-raiser marks a departure from previous years. "It has changed from a formal concert at the New England Conservatory to a dance party at the EpiCenter," says a spokesperson for the event.

Dancers en pointe
Ballet companies are also warming up for the fall-benefit season. New York's American Ballet Theatre hosts its big fall gala on October 30 and will offer a world-premiere performance of Alexei Ratmansky's The Tempest at Lincoln Center's David H. Koch Theater. A gala dinner will follow the performance. Prior to the event, the company will host the "Stars Under the Stars" benefit at the Beverly Hills manse of Jeanne and Anthony Pritzker. In addition to cocktails and dinner, the night will also offer performances from the principal dancers, soloists, and corps de ballet.

While Chicago's Joffrey Ballet Company hosts its signature gala in the spring, the fall "Couture and Cocktails" benefit has grown increasingly popular. This year's event will take place at a new venue, Park West, on October 4. Presenting sponsor Neiman Marcus will provide ballet-inspired looks for a runway show in which ballet trainees will act as models. Looks will also include actual costumes from past ballet productions.

Renaissance inspiration—with lots of red and gold
Also on the calendars of Chicago's performing-art philanthropists: the Lyric Opera's Opening Night Opera Ball, which will feature a performance of Otello, a preshow reception, and a post-opera dinner-dance at the Hilton Chicago. (Last year, the dinner was held at the Radisson Blu Aqua Hotel.) Bill Heffernan of HMR Designs will once again provide decor for the black-tie affair on October 5, and his design scheme will include red-and-gold, Renaissance-style banners and "enormous globes of 18-karat gold camellia foliage."

Similar colors will deck a Washington event on October 6, when the Shakespeare Theatre Company hosts the Harman Center for the Arts Gala. Honoring Downton Abbey actress Elizabeth McGovern, the evening will include a cocktail reception, a gala performance, and dinner and dancing at the National Building Museum. "This year's gala highlights the unique cultural and artistic connection between the United States and the United Kingdom, with a color scheme of red and gold," says a press rep for the event. "The centerpiece is a beautiful, candlelit, beaded chandelier surrounding the Center Court fountain." The company's prop shop director, Chester Hardison, designed the event with assistant prop director Eric Reynolds.

Like the Lyric Opera event, Renaissance inspiration will appear at the Sun-Times Foundation's inaugural Halloween bash on October 25 at the Chicago Cultural Center. The decor from Event Creative will reflect the creepy holiday's typical tropes. "The cocktail area will have a huge cauldron with a glamorous witch stirring her brew, and it will be traditional Halloween," Foster says. "But the dinner is almost like Renaissance Halloween. It's white pumpkins with black lace stretched over them, burgundy candy apples with black sticks, and black ravens sitting on candlesticks."

Whimsical themes and a laid-back vibe
Another renowned Chicago company, the Goodman Theatre, will host its Opening Night Celebration on September 24. Starting, as usual, with cocktails and dinner at the Standard Club, the evening will include a performance of Pullman Porter Blues at the downtown theater. A cast party will follow, and attire is "festive" rather than black-tie. Kehoe Designs will provide decor. "Each table will host vintage train track components that speak to the era of glamorous train travel," says a rep for Kehoe. "Black iron gears, brass fitting, and brass cabin numbers will be focal on each table, and romantic lighting in shades of amber and blues will give the room an intimate glow."

The Bridges of Light Foundation will host its 10th annual Players Ball at the Waldorf-Astoria Orlando on September 14. The event will have a Las Vegas-inspired theme with decor from Brian Schlosser of NV Designs. Entertainment will include a performance from 'N Sync's Chris Kirkpatrick, a show from Side Project with 3-D mapping, and casino games.

Imagination Stage in Bethesda, Maryland, will host its "Stories Made the World Go 'Round" gala on October 19. With cocktails, a silent auction, and a buffet from Ridgewells, the night will center on an original performance from professional actors and Imagine Stage students. Characters in the kid-friendly show will include Lyle the Crocodile and Cinderella. The evening will honor writer Judith Vorst, who penned the classic children's book Alexander and the Terrible, Horrible, No-Good, Very Bad Day.

Chicago's massive Green Tie Ball fund-raiser, which stands to draw more than 3,000 attendees on September 7, will also have a whimsical theme. Inspired by the classic tale Willy Wonka & the Chocolate Factory, the event will include a central bar decorated with oversize pieces of prop candy from Kehoe Designs (think gummy bears, gumdrops, dots, and chocolate.)

Sophisticated floral arrangements
Floral arrangements will stray from the stereotypical homage to autumn. The Chicago Botanic Garden will host its annual Harvest Ball on September 21, with decor from Event Creative. "It's the 'Harvest' ball, so we really strove not to create the typical cornucopia," Foster says. "We're giving it a very French-country feel, with farm tables and a lot of white birch and moss." Decor will include tones of purple and burgundy, and vine-encrusted canopies with hanging lanterns will cover the dinner area. Clusters of crystal chandeliers will hang over the dance floor. "So it's not pumpkins and orange and red everywhere."

Pink for daytime
Of course, October is packed with prominent benefits devoted to breast-cancer awareness, and many of them are daytime affairs. In Chicago, for example, Diane Keaton will speak at the Lynn Sage Cancer Research Foundation's annual Fall Benefit Luncheon on October 3. Held at the Hilton Chicago, the function will include its traditional "Purse-sue the Cure" silent auction, featuring new and vintage handbags. The Breast Cancer Research Foundation will host its Boston Hot Pink Luncheon and Symposium at the Boston Harbor Hotel on the afternoon of October 24.

Artistic inspiration ... and, thankfully, less drama
The Auxiliary Board of the Art Institute of Chicago will pay homage to Magritte at its October 12 gala inspired by an upcoming exhibition. Dubbed "Nothing Is as It Appears," the black-tie, masquerade-theme event will have surrealistic decor, again from Event Creative.

After Hurricane Sandy forced them to postpone—and then replan—last year's gala, planners at the Whitney Museum of Art are looking forward a night that focuses squarely on raising money and saluting a renowned American artist. Scheduled for October 23 at a new venue, Spring Studios, the evening will pay tribute to Ed Ruscha and will once again be designed by David Stark. Louis Vuitton will sponsor the gala, and the luxury partner will "bring so much glamour to the evening," says a rep for the museum. 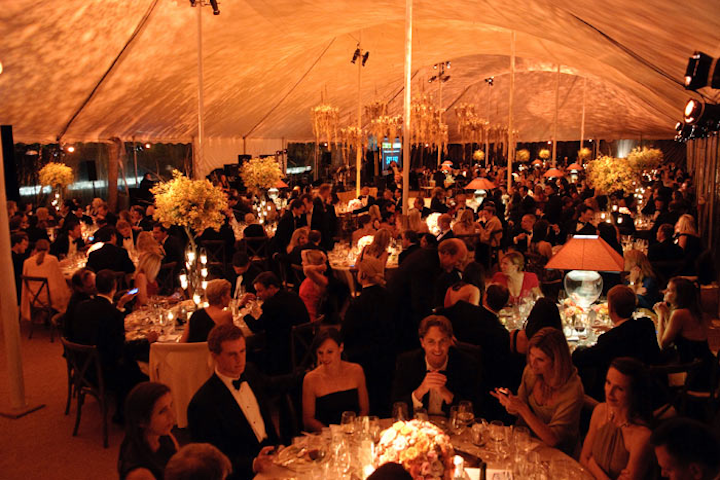