See How One Fashion Accessory Inspired an Entire Party

In a town known for creating fantasy and inspiring the willing suspension of disbelief, Hermès opened its new Beverly Hills flagship store with a party so transformative, it almost felt like an entirely other place and time. And that's exactly what the production and design team behind the nuanced bash was going for: "We wanted it to transport you, so when you were walking into the space, you were really taken into another world. We were trying to achieve a sense of disbelief that you would experience while watching a film or a piece of theater," said Hermès senior vice president of communications Peter Malachi.

About 700 guests found a private warehouse in Culver City reimagined with dreamy vintage Hollywood and French flair, the original inspiration for which was drawn from a scarf specially commissioned for the new store. "The scarf conjures the idea of a Beverly Hills pool, and that was the central inspiration that we built the event around," Malachi said. "We thought about the heritage of Hollywood, the Golden Age. We [also] have a strong reference to Grace Kelly, and one of the images we own in the archive is of her in her dressing room on the set of High Society. In that movie is a library setting and a very important pool scene, as well. These are some of the images that inspired us. And since we always try to have a unique twist, we brought in a bit of Parisian culture."

These were the initial references that triggered the imagination of Malachi along with Hermès special events director Jenna Bunnell, designer Gregoire Diehl, and Delphine Quoi, who oversees the house's global store openings. The Hermès group worked with Carleen Cappelletti, who helmed the Bounce team that produced and co-designed the lavish event, which had a whimsical, nostalgic feel from guests' very arrival.

First, the red carpet arrivals backdrop was a recreation of the Hollywood hills and sign, the iconic white letters spelling out the name of the fashion house.

Inside, guests entered the main party space on a bridge over a sailboat-dotted waterway onto a boardwalk that could be found in the south of France. Alongside it, street vendors served bites like savory crepes, and a seated café offered hungry partygoers a place to rest. "You could imagine yourself in Santa Monica but you could also imagine yourself in Deauville," Malachi said, underscoring the notion that the party was born of classic references not meant to inspire a too-specific place or era.

One room was an interpretation of a glamorous vintage pool evocative of the '50s era—à la the specially commissioned scarf. With no actual water, a giant LED ceiling helped create the illusion of being underwater with prerecorded swimmers, while a troupe of dancers masqueraded as synchronized swimmers and a faux tile flooring bore the house's H motif.

Another room conjured a back lot environment, reminiscent of a historic George Méliès production, and featured a Paris skyline backdrop, with live choreographed performances that referenced old-time Hollywood with modern accents. And in the residential-style library room, one set of windows overlooked a Paris nighttime scene and the opposite wall held a view of downtown Los Angeles.

For an entirely more modern feel, various rooms were each dominated with a dramatic color through lighting. In these rooms, and throughout the space, guests could use custom wooden tokens embedded with R.F.I.D. chips registered to each attendee to interact with a number of different multimedia experiences in a personalized way. Each of the encounters was collected onto a private microsite for the guests to retrieve photos, videos, and audio recordings of their interactions after the event.

Earlier in the evening, a smaller group of about 300 guests gathered at the store for the official ribbon-cutting and opening. There, the aerial dance troupe Bandaloop, dressed in orange silk, performed on the side of the white marble building.

So what does an event of this scale, and this opulence, cost? When asked about budget, Malachi said, "We don't find it very elegant to speak about those things." 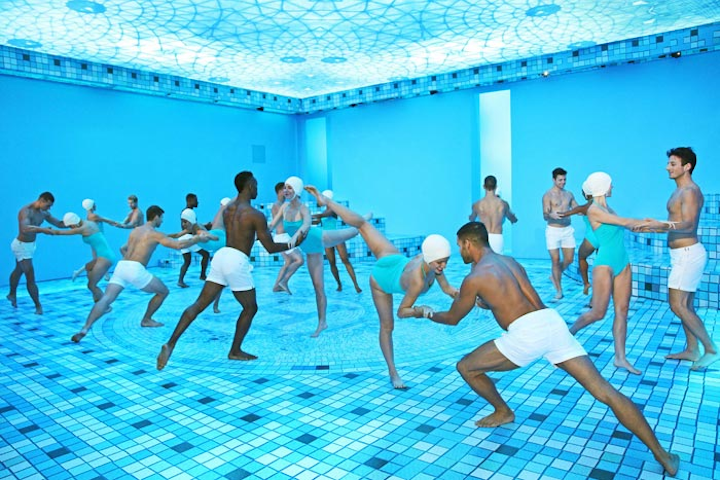 A specially commissioned Hermès scarf that referenced a Beverly Hills pool inspired the party. One room was an interpretation of a glamorous vintage pool, with a giant LED ceiling creating an underwater effect, a troupe of dancers meant to evoke synchronized swimmers, and a faux tile floor bearing the house's H motif.
Photo: Nadine Froger Photography 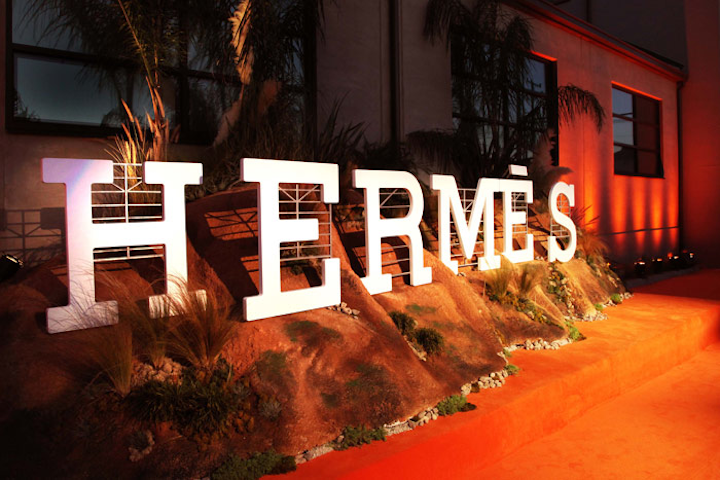 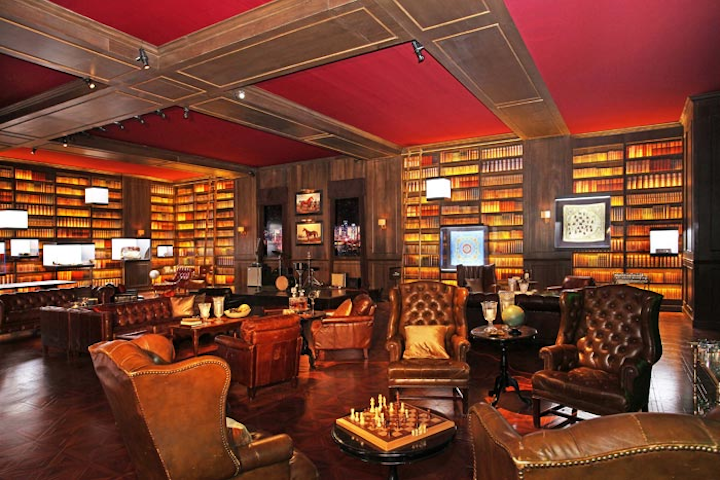 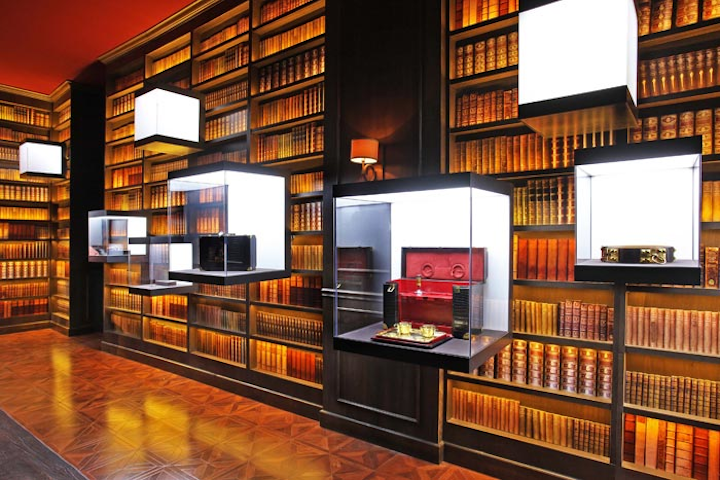 In the library room, Hermès memorabilia referenced the history of the brand: Grace Kelly, Alfred Hitchcock, and Lauren Bacall were counted among its owners. Servers offering scotch from gleaming bar carts added to the atmosphere
Photo: Nadine Froger Photography 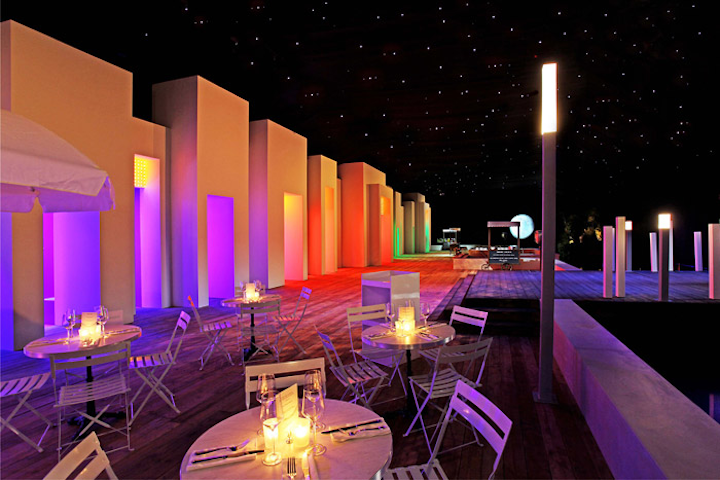 A café setting along the waterfront, placed under a faux starlit sky and moon, provided an area for guests to sit.
Photo: Nadine Froger Photography 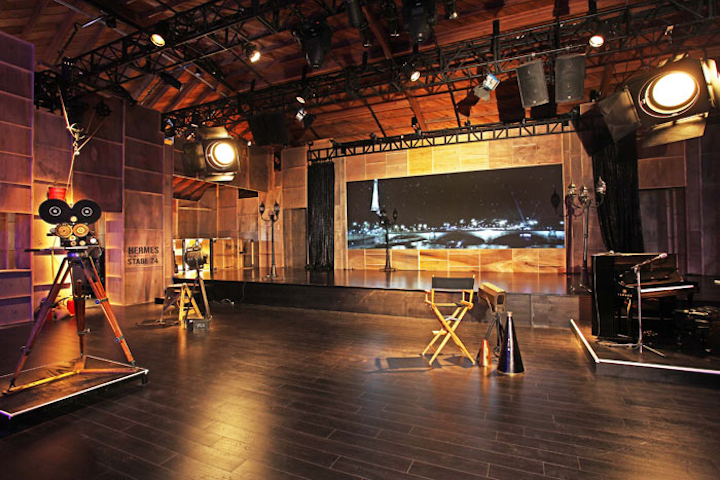 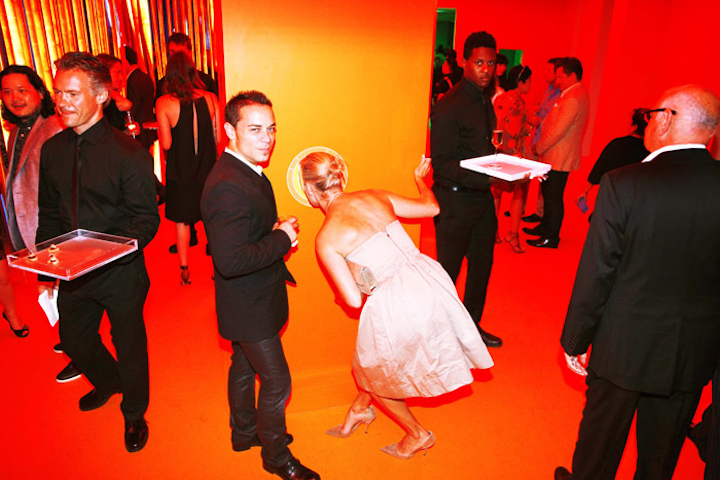 Guests used special R.F.I.D.-embedded wooden tokens to interact with multimedia activities throughout the evening. For instance, attendees could insert their tokens into vintage-style sightseeing viewfinders where they could manipulate the view into a digital postcard to keep as a memento. Or they could visit digital touch-screen soundboards to make a soundtrack.
Photo: Nadine Froger Photography 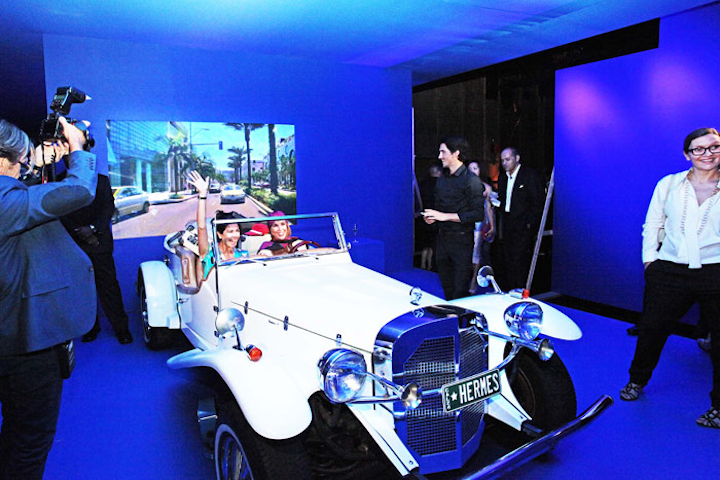 A vintage car served as a prop in a video booth. Through the use of their personalized R.F.I.D. tokens, guests could retrieve videos on a special microsite after the event.
Photo: Nadine Froger Photography 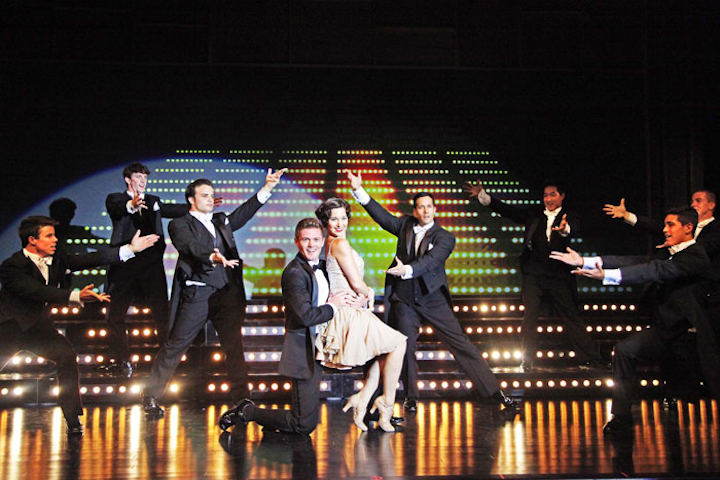 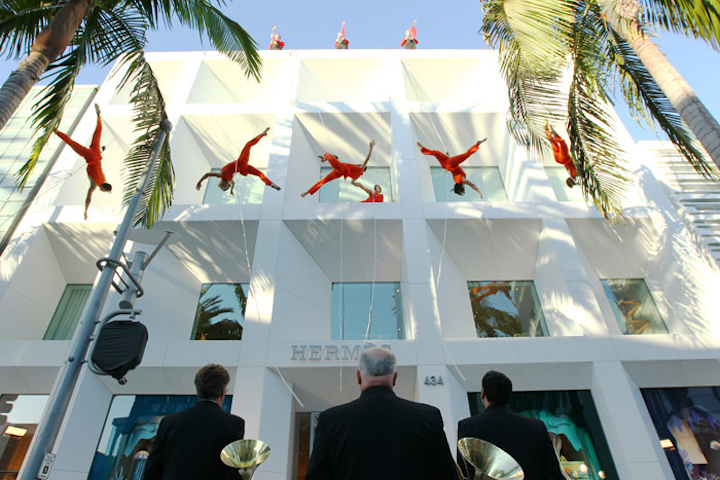