What the Whitney's Last Gala at the Breuer Building Looked Like

The contemporary art museum bid farewell to its uptown home with an homage to its past, along with a view into the future.

As any New Yorker knows, moving day warrants a celebration—and a good drink or two. So to honor its uptown home of 48 years, the historic Breuer building, the Whitney Museum of American Art threw a packing party of sorts for the 2014 gala.

“The whole idea is the last moments before we move onto the next building,” explained event designer David Stark of the event's decor, which included a bar and cocktail tables constructed from repurposed shipping crates.

This year’s gala and the after-party known as the studio party, held on November 19, were the museum’s final events in the space before its move to the meatpacking district on May 1, 2015. The new downtown digs feature floor-to-ceiling windows that overlook the Hudson River, which Stark and Bentley Meeker’s team utilized, shooting 24 hours' worth of still images that were then projected onto the gallery walls of the Breuer building during the event.

“Being in the Breuer building, but seeing the view of what you’ll be seeing out of the new building is a really exciting concept,” Stark said. “We’re looking at the history of being in this building, and we’re also looking at the future.”

The Breuer building was the Whitney’s third home; the museum had originated on West 8th Street, then moved to West 54th Street in 1954 before heading to the 75th Street location. Designed by Marcel Breuer, the modernist building built in a traditionalist neighborhood received unfavorable reviews when it first opened, but is now considered a beloved city landmark. Filling the now-vacant, cavernous space for the event presented planning challenges—and some advantages.

“Decorating an entire building is expensive, so we made some strategic choices, such as using the lobby for the step-and-repeat instead of building an arrivals tent; using the entire second floor for the kitchen so we could fit more tables on the third floor; and using the fourth floor for both cocktails and the studio party later that evening,” explained Gina Rogak, the museum’s director of special events. “We used the lower level for studio party coat check and the lobby gallery for gala coat check, relieving the congestion that typically occurs when gala guests leave and studio party guests arrive.”

Plus, the blank space allowed Stark to have some design fun by writing the names of every artist who once had an exhibition in the building on the walls of the third-floor dining room. “We started with the idea that when you’re in a museum you can’t touch things and you can’t write on the walls, but in this case, we could actually write on the walls,” said Stark. Rogak added, “This was an once-in-a-lifetime opportunity to use the space without artwork to protect!”

The Louis Vuitton-sponsored event, which raised more than $4.3 million, honored all 98 living artists who had major solo shows at the Upper East Side space, including Chuck Close, Frank Gehry, Jeff Koons, and Kara Walker.

While the fund-raiser left an unforgettable mark on the old home, Rogak is looking forward to events in the new Renzo Piano-designed venue.

“The new building is a game changer for us—eight rentable spaces compared to just two in the Breuer building; nearly every space has an outdoor component, whether a terrace or a breathtaking panoramic view. … We held a couple of sneak-preview events last month for event planners and corporate members and the comment we heard most frequently was ‘Wow!’” 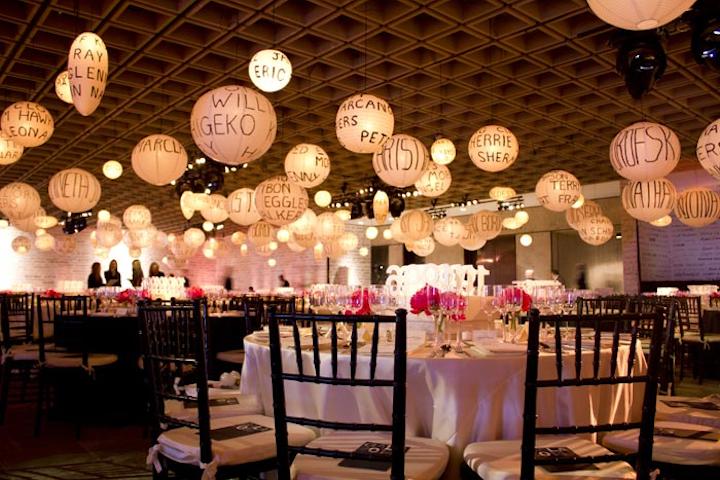 “We’re leaving our mark with all the artists who have graced the walls of this museum, and then bringing that overhead with the lanterns and bringing it to the tables and the centerpieces,” said Stark about the dining room decor, which included paper lanterns with the honorees’ names.
Photo: Cornelia Stiles/BizBash 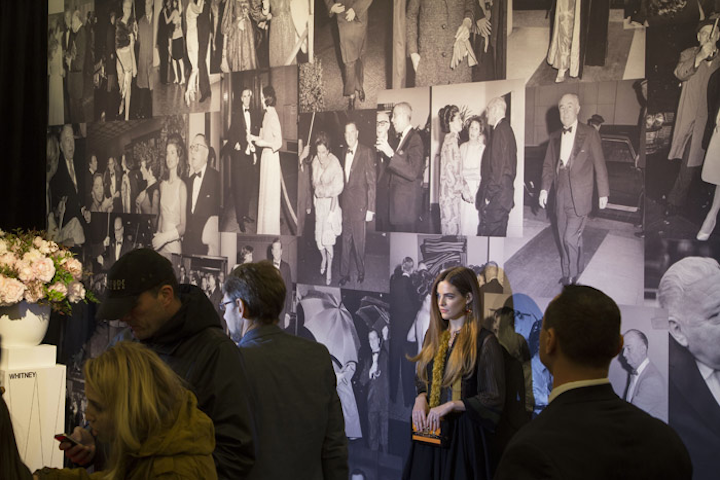 Guests, like actress Riley Keough, posed for photographers in front of the entry wall, which displayed photos from the museum’s first gala in 1967. “It was overwhelming initially, but then we realized it was interesting to focus on the year the building opened, and even within that there were a plethora of things to choose from,” explained Stark about searching the museum’s archives for inspiration.
Photo: Susie Montagna 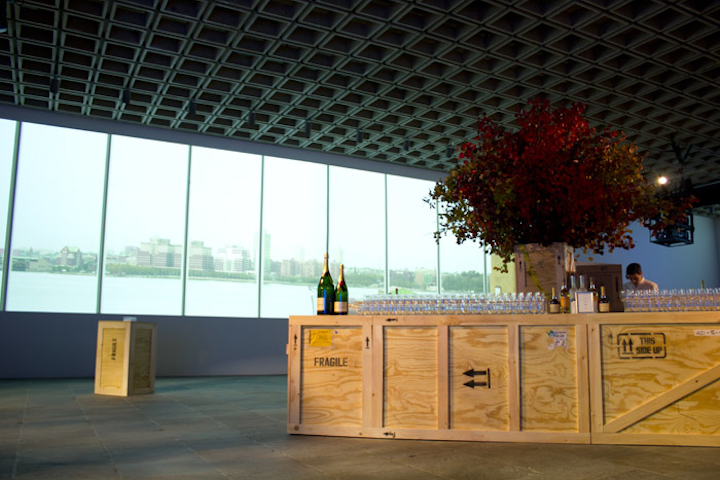 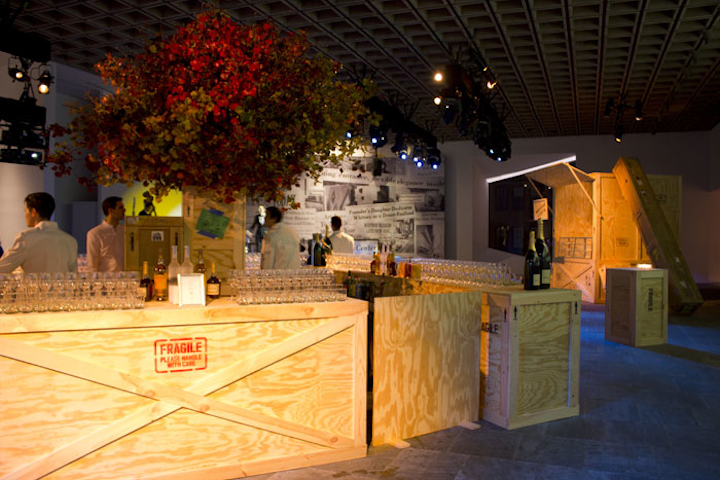 The cocktail and studio party decor included a bar and cocktail tables constructed from repurposed shipping crates—some were authentic crates from the museum, others were newly manufactured for the event.
Photo: Cornelia Stiles/BizBash 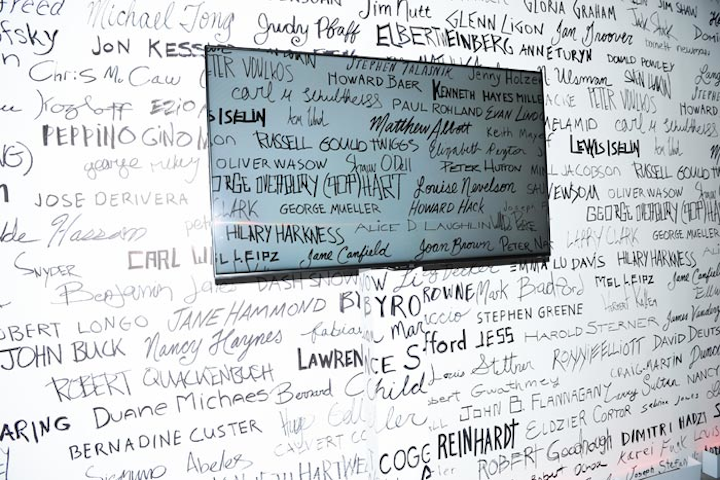 The names of every artist who once had an exhibition in the Breuer building were handwritten on the walls of the third-floor dining space.
Photo: BFA NYC 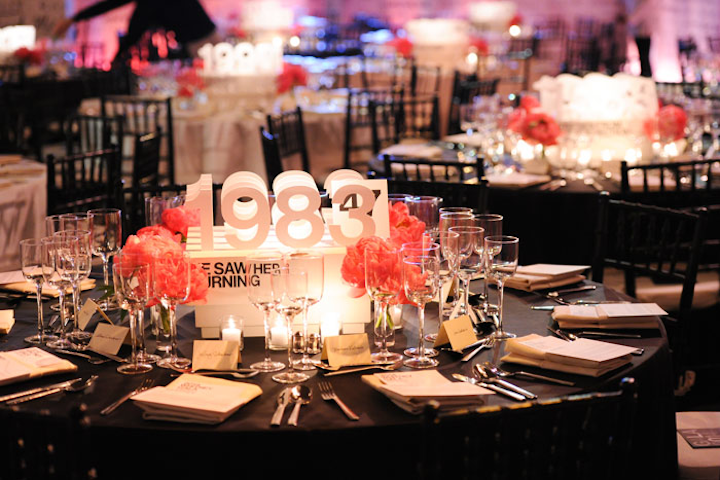 Sculptural representations of different years in the life of the Breuer building, along with the names of that year’s exhibitions, served as the dining room centerpieces.
Photo: BFA NYC 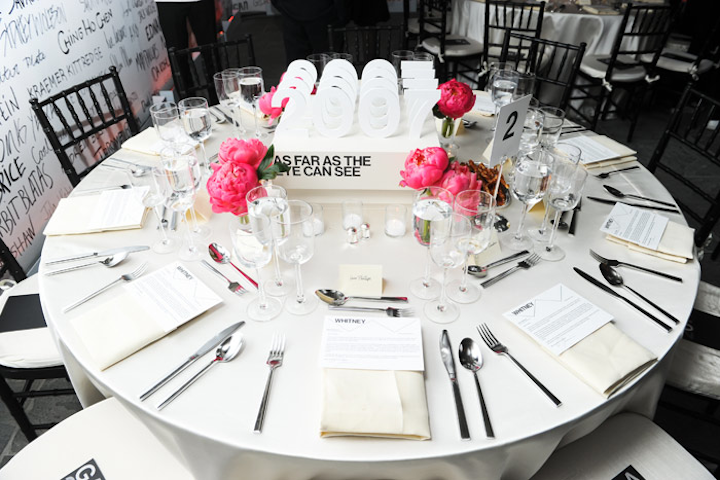 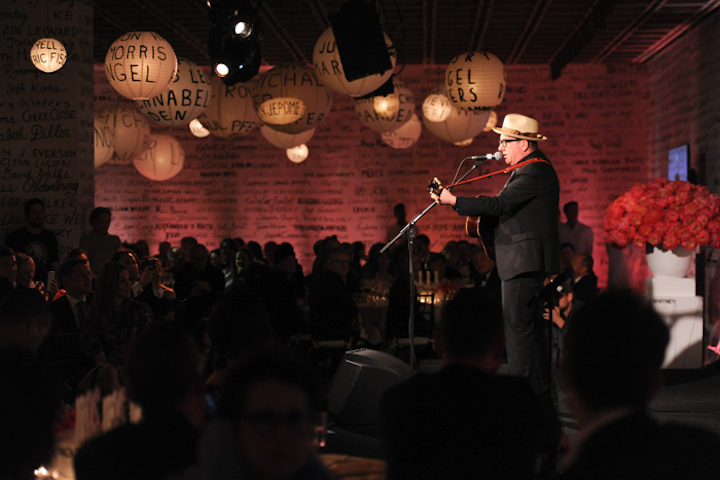 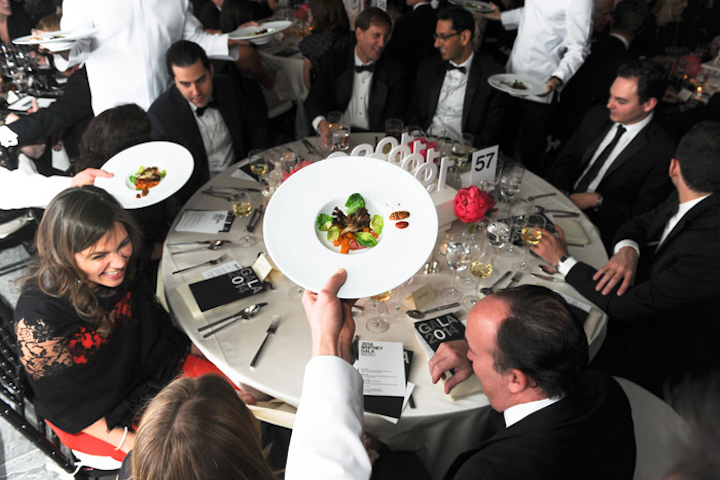 Guests dined on a pot-au-feu with squash, hen-of-the-woods mushrooms, and Brussels sprouts; branzino baked in parchment; and mocha and raspberry baked Alaska for dessert, by Olivier Cheng Catering and Events.
Photo: BFA NYC 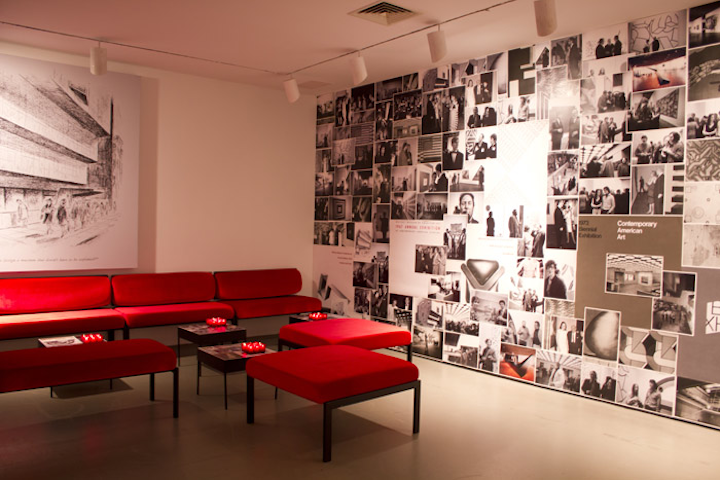 Layered collages made from news clippings, photographs, catalog covers, and invitations from the Whitney’s exhibitions and events created a museum timeline that lined the wall of the party’s lounge space.
Photo: Cornelia Stiles/BizBash 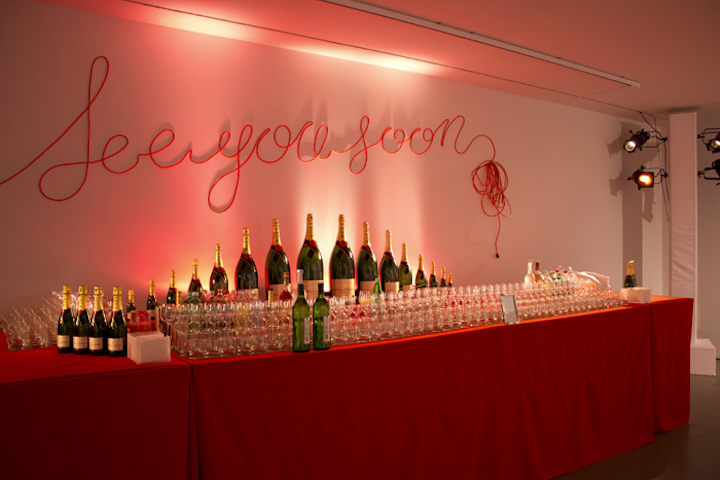 Playing off the moving theme, Stark created construction-inspired wall art, shaping utilitarian extension cords into closing phrases, such as “See you soon” and “Stay tuned.” As for the new space, Rogak sees a bright, busy future: “We anticipate a 70 percent increase in external events, in addition to our regular schedule of internal events and three major annual fund-raising events.”
Photo: Cornelia Stiles/BizBash 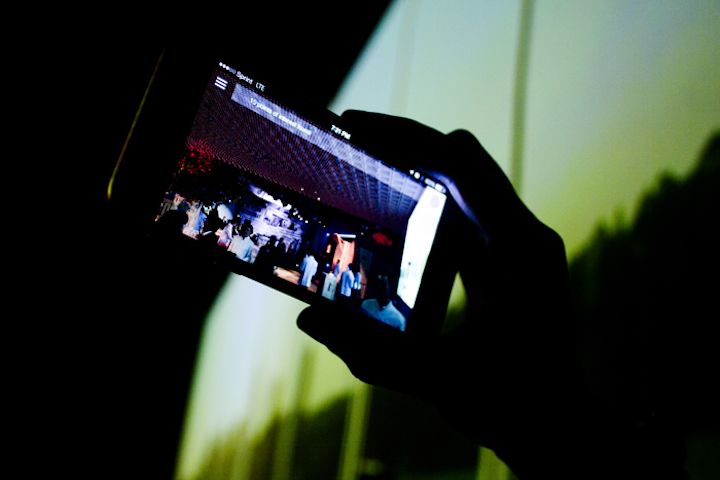 The event featured a special installation by artist Will Pappenheimer, who designed an augmented reality mobile app titled Proxy, 5-WM2A. The virtual “drug” experience allowed guests to view the space along with trippy, hallucinatory graphics on their phones.
Photo: Cornelia Stiles/BizBash 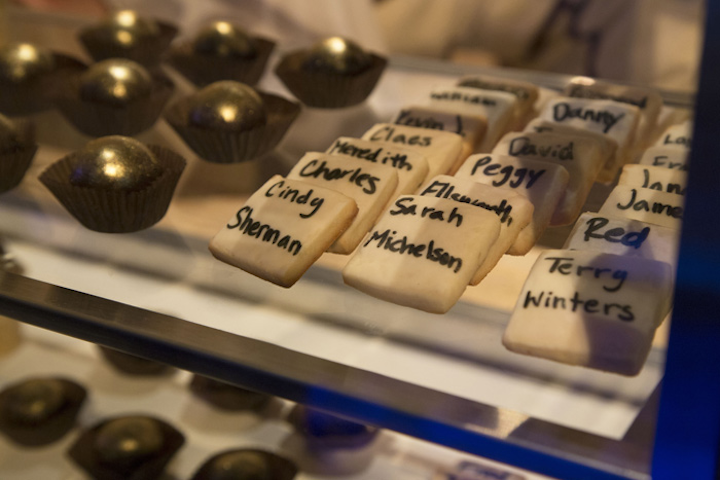 Brooklyn-based Flour Shop provided an assortment of sweet treats for the partygoers, including sugar cookies with the names of some of the artists spelled out in icing.
Photo: Susie Montagna 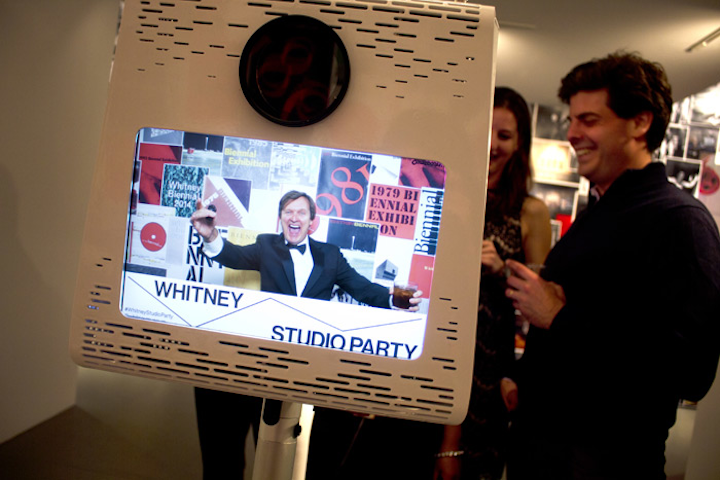 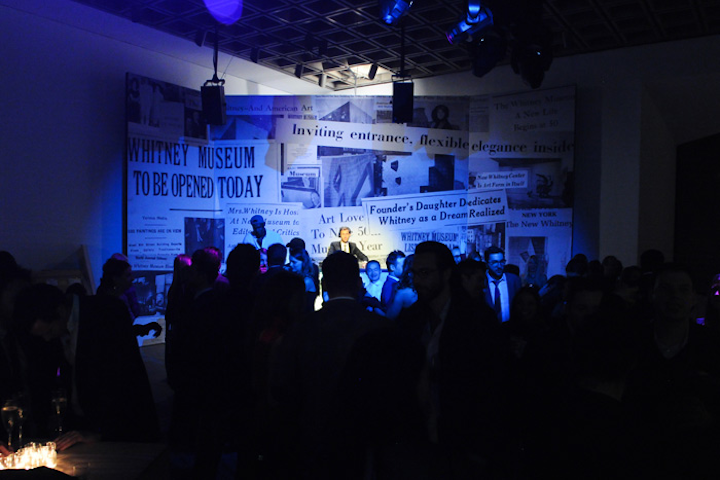 The studio party featured a DJ set by Zen Freeman, who spun in front of a backdrop of archival newspaper headlines announcing the opening of the building in 1967.
Photo: BFA NYC
More in Event Design