Why Omega Hosted Dinner on the Moon

The Swiss watchmaker built its own space capsule and lunar base inside a Texas aircraft hangar.

In honor of its continued commitment to space exploration and its legacy as the first watch worn on the moon, Omega turned a May 12 outing at Sugar Land’s Western Airways Airport Hangar into an outer space voyage. The black-tie celebration—which was attended by astronauts, prominent members of the Houston community, and industry guests from around the country—came complete with its own space capsule, gravel and rocks to recreate the lunar surface, and a cameo by Gravity star George Clooney.

While the Swiss brand's 2015 Speedmaster Silver Snoopy Award timepiece commemorates 45 years since the Apollo 13 mission, when the astronauts relied on their Speedmaster watches to successfully return home, there wasn't a specific anniversary in mind for the dinner, said Stephen Urquhart, president of Omega. "It was simply about choosing a time that suited our partners and guests," he said.

Working with the in-house events and marketing team at Omega, Bureau Betak was enlisted to create the authentic look, feel, and sound of life on the moon in the Lone Star State. (Houston is home to NASA, after all.) Under the eye of production firm principal Alex de Betak, a 150-person team worked nearly an entire week to transform the 20,000-square-foot space for the event. Five truckloads of gravel, coupled with rocks of various sizes, were used to lay the foundation of the dinner floor; glitter was added to the mix for sparkle.

“For an event like this, our team was dedicated to representing our luxurious standards,” said Urquhart. “That goes right through to the smallest details such as the physical invitation.” Indeed, the invite itself was designed with the shape and look of the moon with wording presented in the style of a NASA transcript between astronauts and ground control. “This unique approach was all about giving guests an unforgettable experience, from the first moment to the last,” added Urquhart.

Some 300 guests converged on the suburban Houston hangar for the occasion. Greeted by a phalanx of female model staffers dressed in otherworldly garb, the attendees entered into a space devoid of natural sunlight and in through a tunnel surrounded by special light and sound effects. They emerged into the cocktail area, a specially built space capsule displaying both vintage and modern Omega Speedmaster timepieces, as well as videos and murals that chronicled the brand’s storied relationship with the space program. Prerecorded flight calls, meanwhile, served as white background noise, filling the all-white series of rooms with decidedly spaceship-like dialogue.

The journey from earth to the moon, or from cocktails to dinner, was signaled by smoke, sound, and light effects a la a take-off simulation, and ushered guests through a transition space to doors that revealed a full-scale “landing on the moon” tableau—or the anointed Omega Lunar Base. Details, from the charger plates to the levitating centerpieces to the globes peppered throughout, set the scene without being obtrusively thematic.

Despite not taking place in a city as grandiose as New York, Paris, or Hong Kong, the one-time event, with no plans to be replicated globally, certainly merited a considerable budget. For Urquhart, the focus was on making sure his guests experienced an event they'd remember for a long time. “While there are obviously budgets that we work to, an event like this is built around the experience,” he noted. “Because our history with space exploration is so integral to the brand, it of course deserved a celebration on such a large scale.”

As guests exited the hangar at the conclusion of the festivities, one final transition took place. Thousands of LED lights that had been placed throughout the exterior of the venue and the grounds—mimicking twinkling stars in the night sky—became visible. 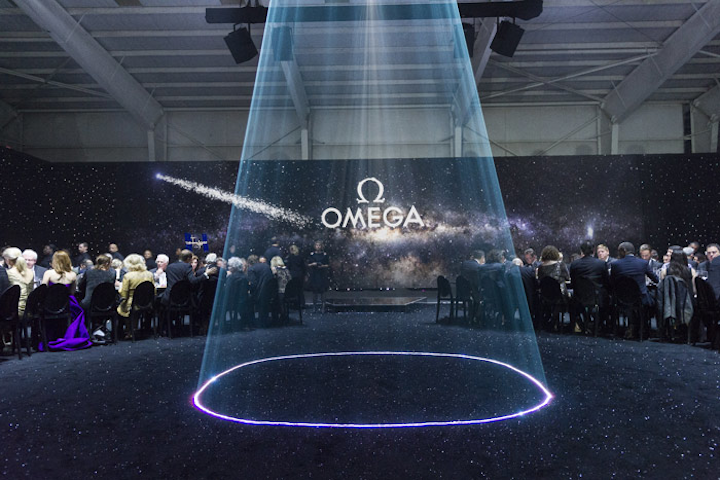 Adding to the dinner's outer-space ambience was a massive video screen that showed planets moving across the sky, a space station floating by, meteor showers, and an astronaut drifting in space a la Clooney's film Gravity.
Photo: Courtesy of Omega Ltd. 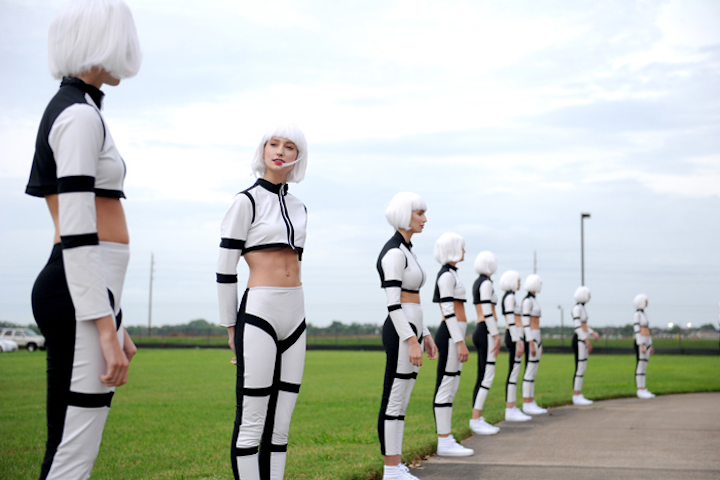 A phalanx of female model staffers dressed in out-of-this-world space-age uniforms greeted guests as they arrived at the suburban Houston venue in Sugar Land.
Photo: Craig Barritt/Getty Images for Omega 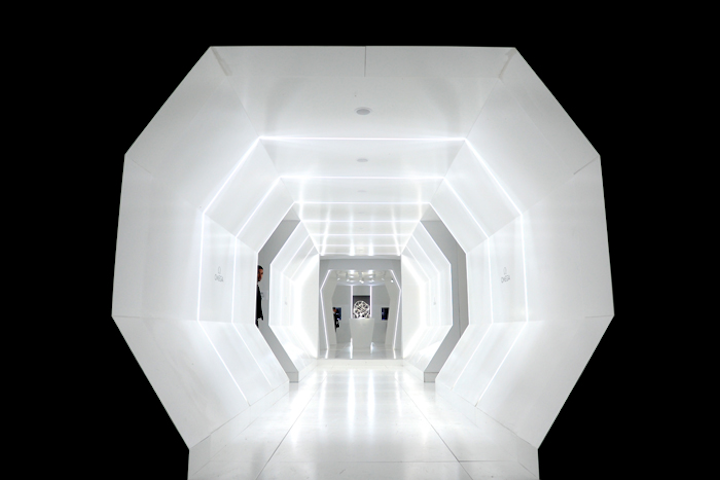 The cocktail portion of the evening featured a series of interconnected all-white rooms, which guests entered into via an octagonal-shaped tunnel. A 32-foot-long walkway led from the spaceship-cum-cocktail area to the dinner space, which was styled to look like the surface of the moon.
Photo: Craig Barritt/Getty Images for Omega 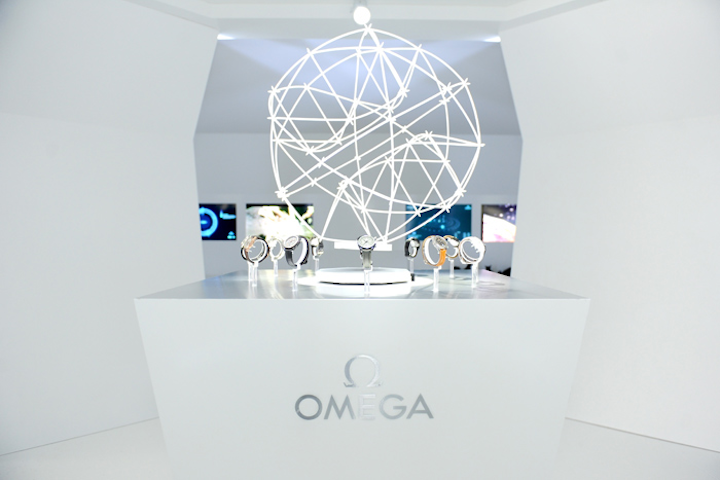 The all-white odyssey-style "capsule" was a veritable homage to Omega and the storied relationship it has had with the space program since 1965. A full array of the Swiss watchmaker's iconic Speedmaster timepieces, spanning several decades, were on display.
Photo: Craig Barritt/Getty Images for Omega 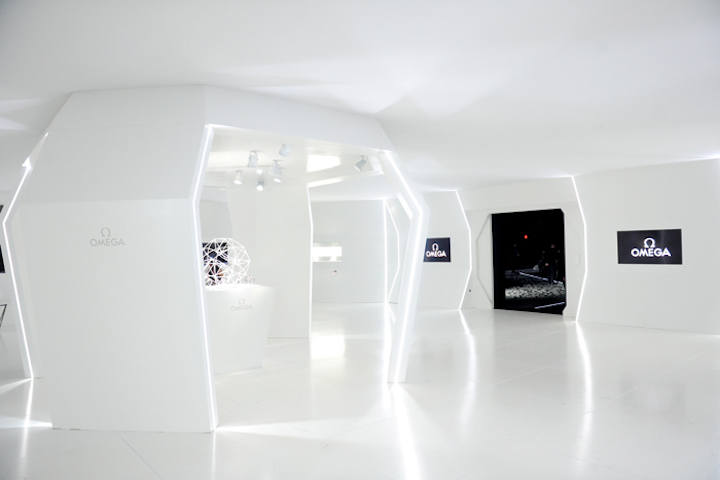 While the event featured no live entertainment or DJ, prerecorded voices did play overhead throughout the cocktail portion—mimicking astronaut flight calls with sayings like, "Welcome aboard. The outside temperature is minus…" Complementing the white-noise background was a smoke effect, which was used not only to recreate the moon landing atmosphere, but also to usher guests to the start of dinner.
Photo: Craig Barritt/Getty Images for Omega 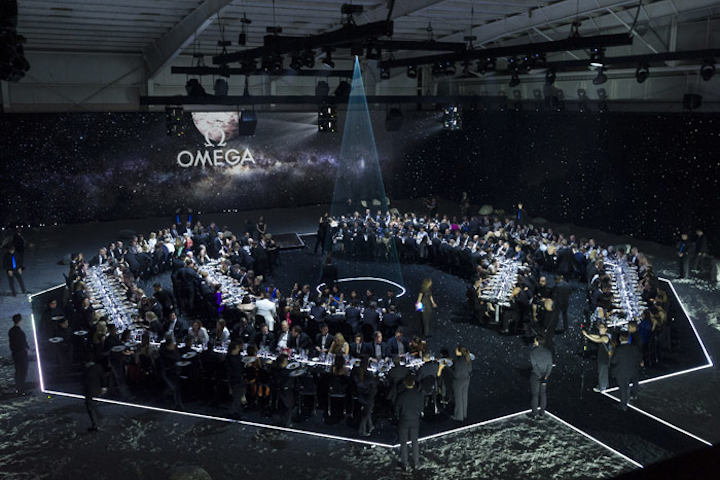 Bureau Betak transformed the Western Airways Hangar into a spectacular 20,000-square-foot party setting—the Omega Lunar Base—that flowed from the "space capsule" into a dramatic moonscape, where dinner was served beneath a starlit orb.
Photo: Courtesy of Omega Ltd. 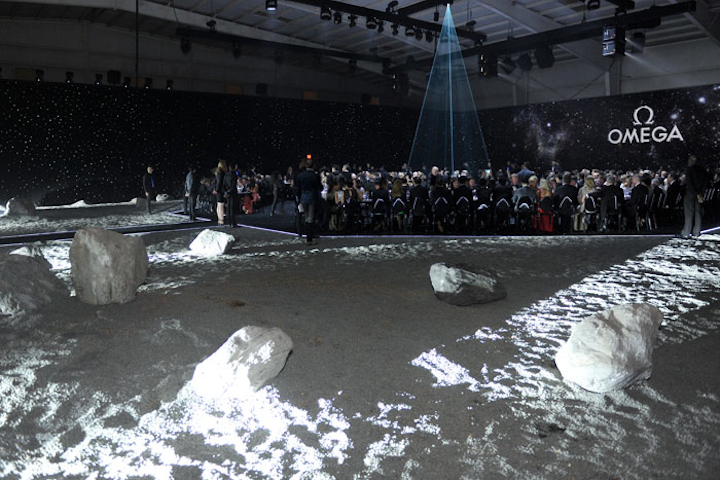 Five truckloads' worth of gravel combined with large rocks comprised the setting in which some 300 invited guests dined. More than 150 workers were enlisted to create the set, which was designed to transport guests to dinner on the surface of the moon.
Photo: Craig Barritt/Getty Images for Omega 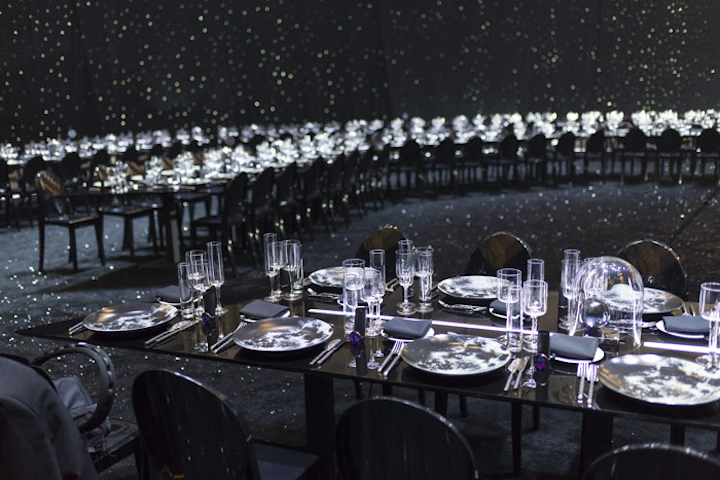 Guests dined above a custom floor covered with crushed rock and gravel that had been mixed with glitter to achieve a sparkle effect so as to add some pops of brightness to the otherwise all-black decor scheme.
Photo: Courtesy of Omega Ltd. 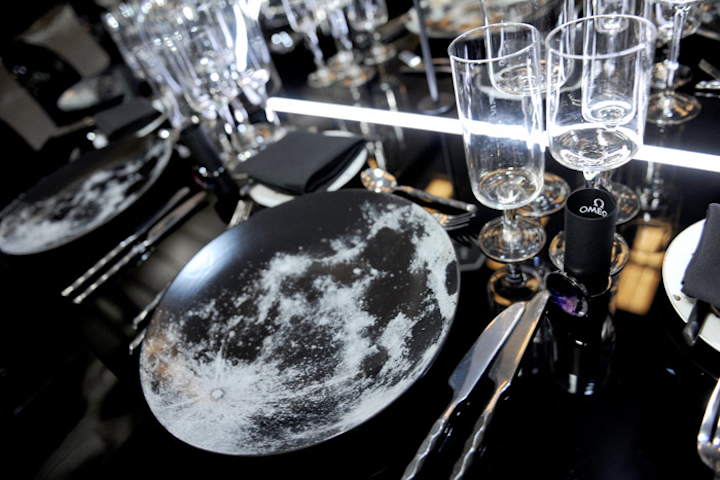 Keeping on theme, the charger plates at each table setting featured the design of a moon.
Photo: Craig Barritt/Getty Images for Omega 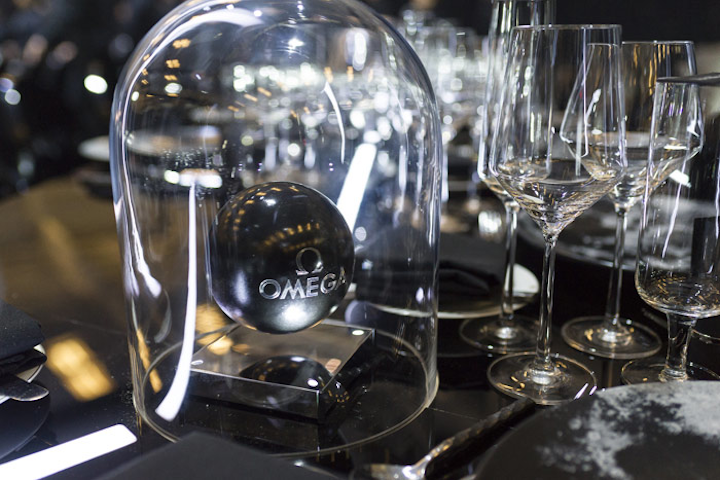 To mimic the zero-gravity effect of dining on the moon, traditional floral centerpieces were eschewed in favor of levitating displays. That included Omega watches that appeared to float in air, oscillating on "moon rocks" under glass domes .
Photo: Courtesy of Omega Ltd. 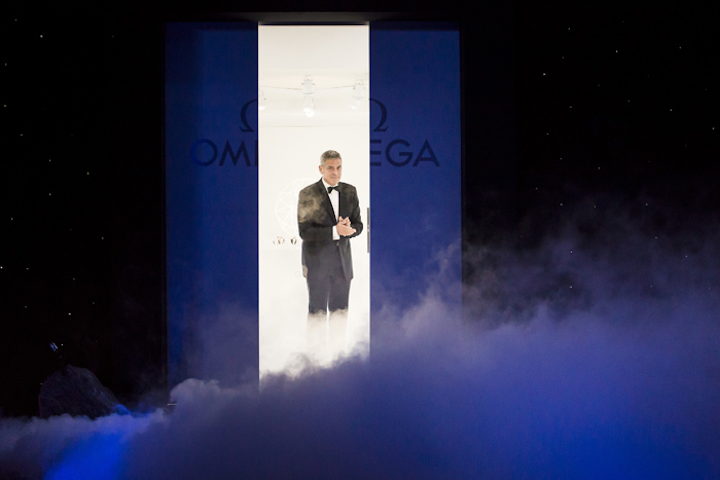 The M.C. of the night, Lily Koppel, author of The Astronaut Wives Club, welcomed Omega ambassador George Clooney to the stage, calling him the  “man on the moon.” The actor, who emerged from a cloud of white smoke and waxed poetic on the Apollo 13 mission, shared the stage with Omega president Stephen Urquhart and astronauts Gene Cernan, Captain Jim Lovell, and General Thomas Stafford.
Photo: Courtesy of Omega Ltd. 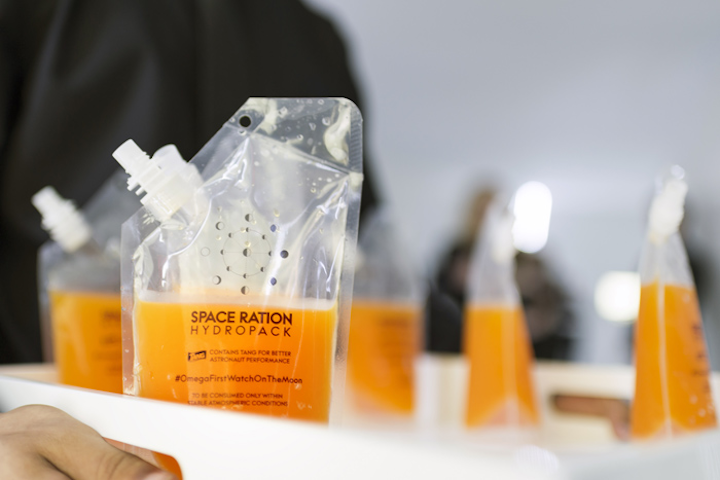 A Fare Extraordinaire provided the dinner, cocktails, and hors d'oeuvres, all of which featured a space-age theme, including the Tang-and-grapefruit-juice-infused vodka cocktail served in a Space Ration Hydropack.
Photo: Courtesy of Omega Ltd. 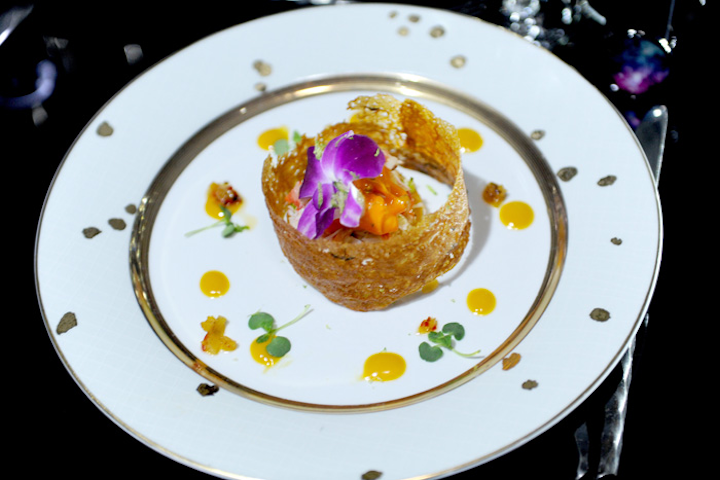 The "On the Moon" dinner was prepared by Houston-based A Fare Extraordinaire under the eye of French chef Valentin Neraudeau, flown in from Paris for the occasion. The first meat course consisted of fresh king crab and Granny Smith green apple with thyme crisp, olive oil madeleine, carrot and cumin foam, and an extra virgin olive oil vinaigrette. Also on the menu was filet of veal with eggplant caviar and caramelized basil-infused jus, and dessert of white chocolate demi spheres with mixed berries.
Photo: Craig Barritt/Getty Images for Omega 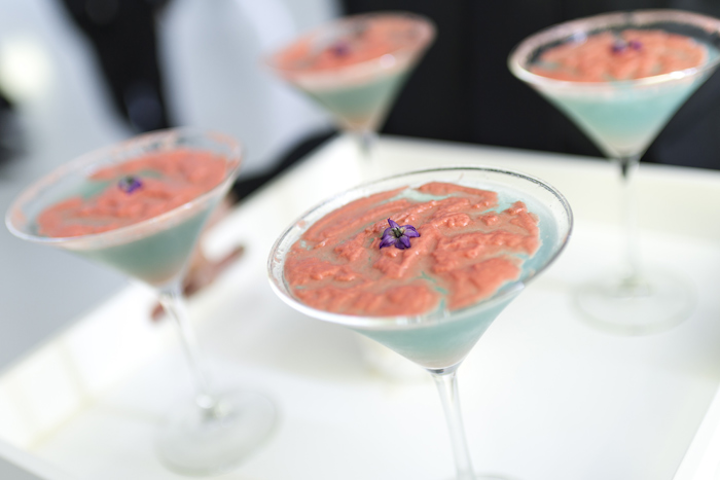 London-based mixologist Justin Darnes prepared four specialty beverages, and the presentation of each was a twist on the night's space-age theme. For instance, the gin and Williams Pear cocktail was topped with a salted and spiced watermelon foam. Other libations included calvados, kirsh, and raspberry coulis, and, of course, a Clooney-branded Casamigos tequila old fashioned.
Photo: Courtesy of Omega Ltd. 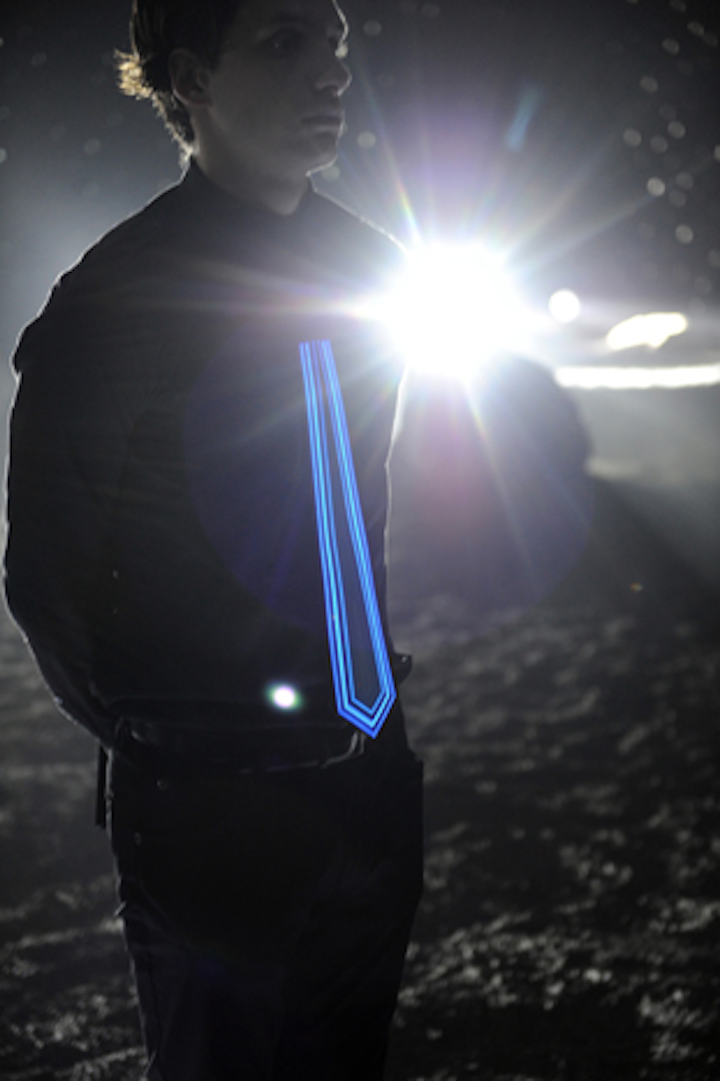