See a Tented Gala That Looked Like a Starry Night

The City of Hope gala had a lunar-like stage and a starry tented backdrop.

Each year, City of Hope’s Spirit of Life award gala welcomes big-name guests from the music and entertainment industries. And this year’s event on November 10 honored entertainment attorney Joel Katz, whose aesthetic preferences dictated a celestial theme for the highly visual event, which would go on to raise $3.2 million.

City of Hope associate vice president of national philanthropy Kelley Morris tapped Natalie McAdams of Namevents for the event’s production. Honoree Katz told the production and design team that he loved the stars and moon. He requested the feel of a night under the stars—although the event was actually held in a tent in the parking lot below the Santa Monica Pier in Los Angeles—so the team created a stage that resembled the moon's pocked surface and used fiber-optic panels in the roof of the tent to resemble stars. The sides of the tent were also draped black, and the carpeting was black as well so that the focus remained on the stage.

A guitar-shaped fountain was a nod to the invitation and the decor, with the message “Music is Medicine, Music is Hope.” That fountain will now reside at the City of Hope campus in Duarte, California. Further adding to the theme, Namevents created the tribute journal as a large piece of sheet music with the ads on individual stanzas.

There was also a bit of a southern influence at play in the theme, as the honoree hails from Atlanta. Guests supped on Southern food and sipped from a moonshine-like presentation from sponsor Stillhouse Whiskey. Individual ice creams at the end of the night came from Jeni’s Splendid Ice Creams. 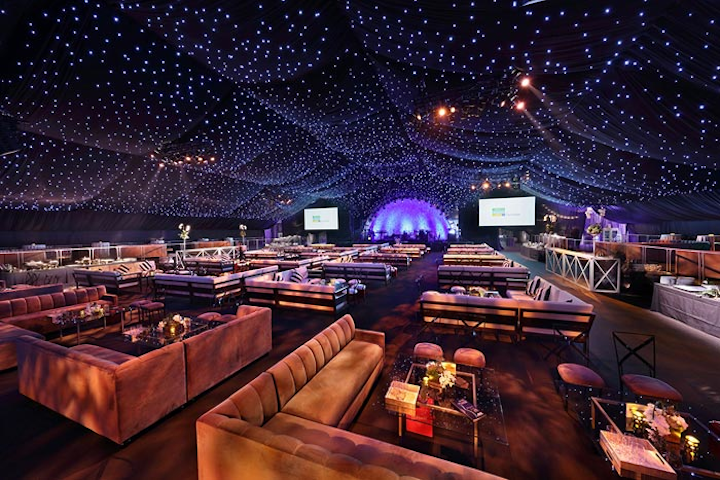 Fiber-optic panels hung from the roof of the City of Hope gala tent to create the look of a starlit sky.
Photo: Line 8 Photography 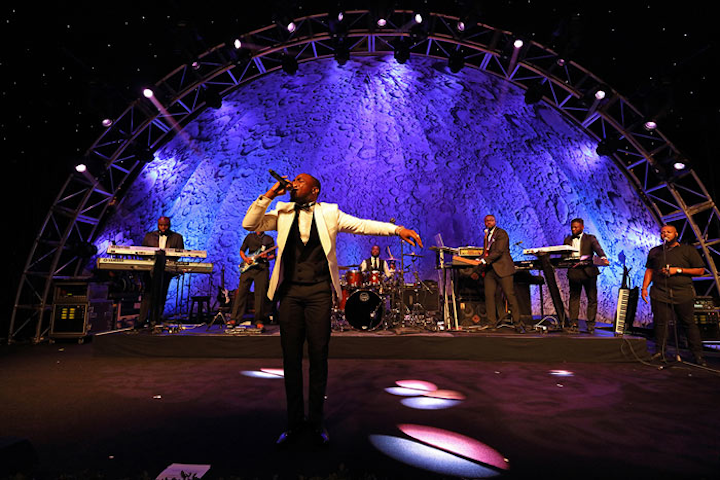 A half moon-shaped stage backdrop featured what appeared to be a lunar-like surface.
Photo: Line 8 Photography 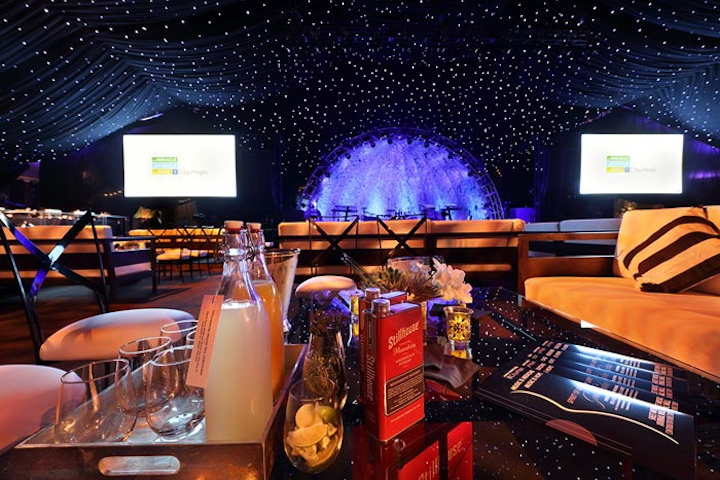 Whiskey was served from a moonshine-like presentation from sponsor Stillhouse.
Photo: Line 8 Photography 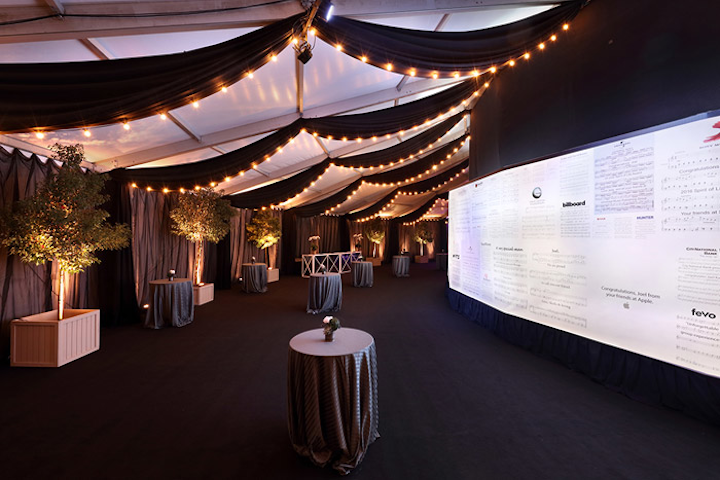 The tribute journal was blown up and presented in the style of sheet music.
Photo:  Line 8 Photography 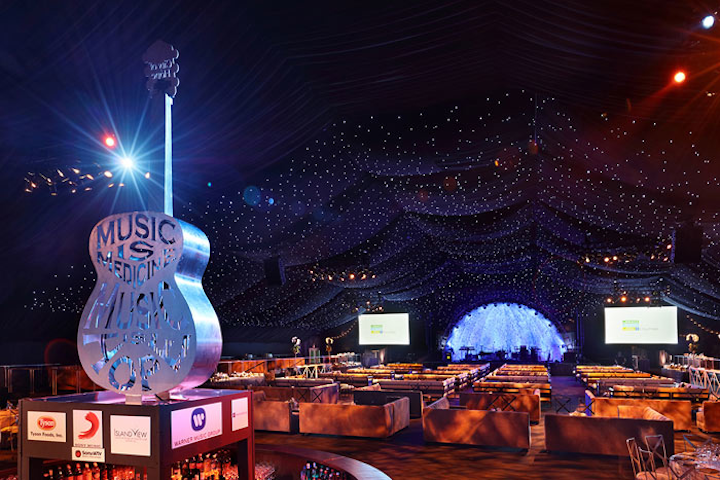 A guitar-shaped fountain was a nod to the invitation and the decor; it will move to the City of Hope Duarte campus.
Photo: Line 8 Photography 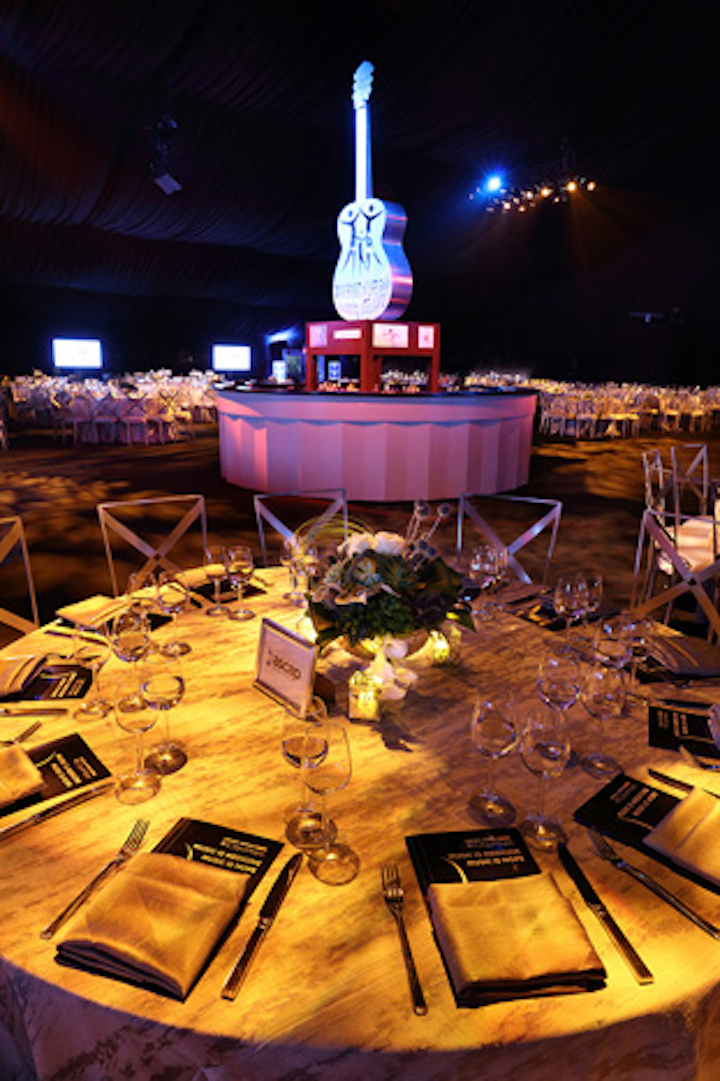 Linens were in keeping with the celestial feel.
Photo: Line 8 Photography 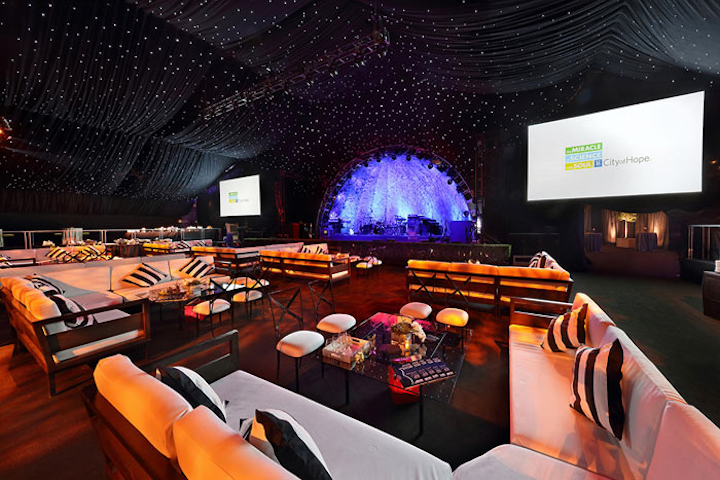