The Mission: Gratitude Gala in Boston celebrated veterans, service members, and their families.

To recognize, pay tribute to, and raise money for the care and treatment of combat veterans, service members, and their families, the Home Base Program hosted its annual fund-raising gala, Mission: Gratitude, which raised a record of more than $1.7 million this year.

With 600 guests in attendance for the October 5 affair, the historic Charlestown Navy Yard, a designated National Historic Park, was chosen as the location for the gala—by no coincidence, just yards from Home Base’s future home base. As Boston’s Zakim Bridge illuminated in red, white, and blue to commemorate the event, a V.I.P. cocktail reception brought 300 guests aboard the U.S.S. Constitution. Dinner was dramatically signified by the firing of a canon.

Arnold Worldwide and design and production partner Tyger Productions teamed up to build the event from the ground up. Beginning with an empty pier, the team erected a massive 13,000-square-foot tent (164 feet long by 82 feet wide), which producers said was the largest in the history of the Navy Yard. To emphasize the views of the Boston skyline, a dramatic 13-foot wall of glass dominated one side of the tent, bringing the outdoors in.

To balance the scale of the large-structure tent, Tyger Productions, working on this event for the first time, designed and fabricated a custom installation of undulating translucent panels suspended from the ceiling. The dream-like canopy of clouds masked the ceiling structure and created a breathtaking visual that also made for a more intimate feel in the tent. “The ceiling treatment softened the space,” said company founder and principal Ty Kuppig. “Unless you’re going for an industrial feel, exposed metal tends to take away from an event. By working with the height of the space, we were able to create an intimate, cocoon-like setting.”

As the sun set outside, a dynamic lighting design illuminated the cloud ceiling treatment over guests, mimicking the sunset outdoors. “It went from a light yellow to oranges to fuchsia to finally a starry night done gradually over the course of hours so as not to be too obvious,” said Kuppig.

While the cloud-like canopy overhead created a dramatic statement, a similar level of detail was paid to the dinner settings themselves. A mix of round tables with gunmetal grey linens and long rectangular tables with salvaged wood tops created a warm but modern look with slight military inspiration, accented by elegant touches of vintage gold and mercury glass.

“Nothing too specific, certainly nothing themed,” Kuppig noted of the decor. “With the mission and the content, it felt like it would detract from that to give it a theme; instead, it was about letting the speakers shine and engage with their guests. By handling the design in the way we did, it focused attention to what was being said—not just what they saw.”

Following dinner, guests were treated to a performance by Emmy- and Tony Award-winning actress and singer Kristin Chenoweth. 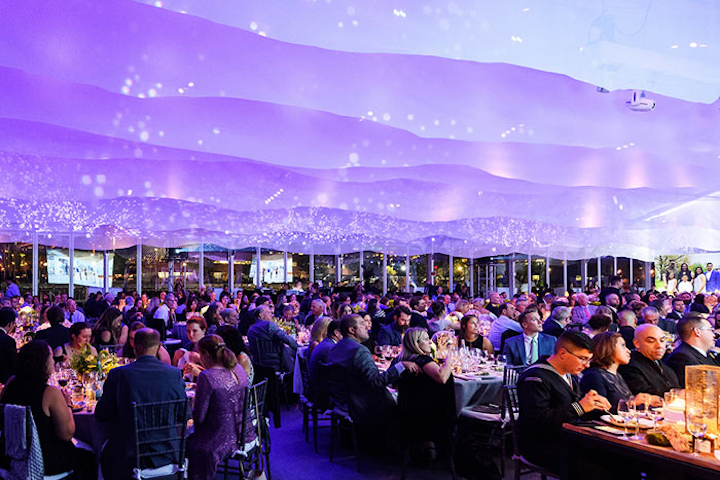 The lighting evolved through the course of the evening in an ombre palette of warm tones, finally dissolving into a "starry night" look with deep blues punctuated by a sky full of bright white stars. "It kept the event changing throughout the evening, so guests were afforded multiple experiences at the same event," said Kuppig.
Photo: Ned Jackson 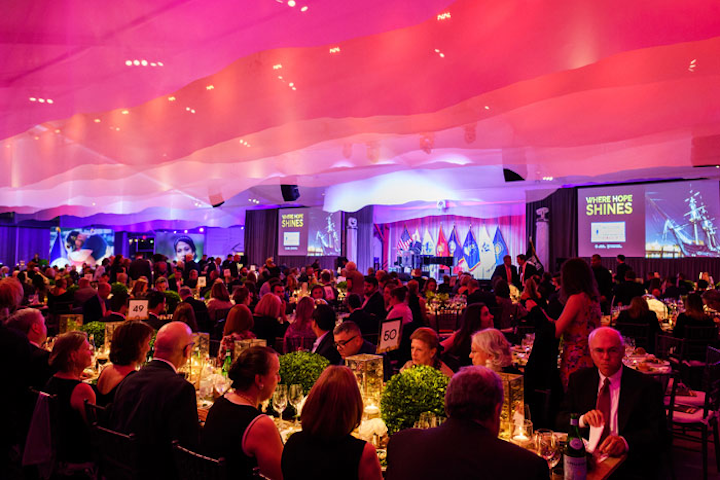 The Home Base Program's Mission: Gratitude gala, which took place on October 5 in Boston, was attended by 600 guests, raising a record $1.7 million. Arnold Worldwide partnered with Tyger Productions to execute the event at the historic Charlestown Navy Yard.
Photo: Ned Jackson 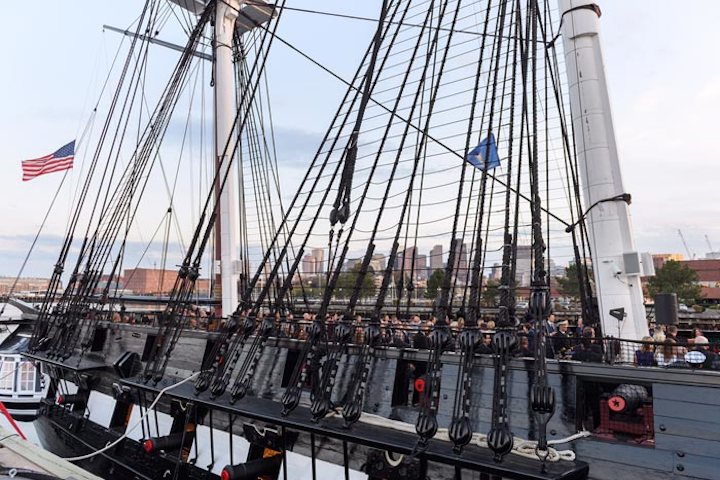 Prior to dinner, 300 V.I.P. guests enjoyed a red-carpet cocktail reception aboard the historic U.S.S. Constitution before joining the rest of the attendees for dinner. Their vantage point allowed them an unobstructed view of what will be Home Base's future headquarters mere yards away.
Photo: Ned Jackson 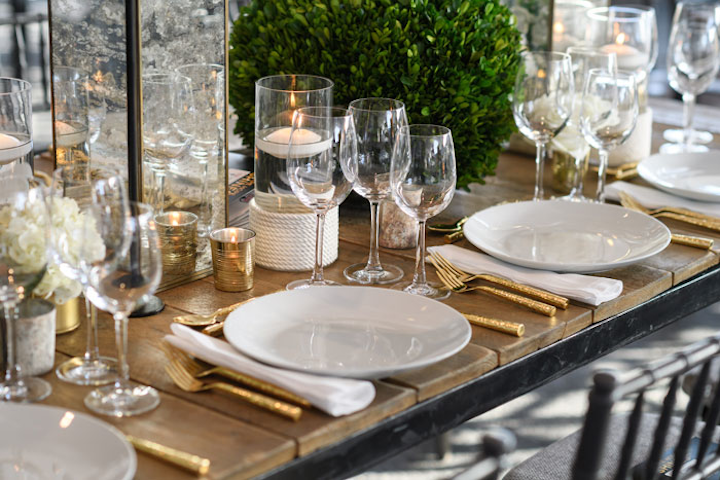 A neutral yet sophisticated color palette set the tone for the dinner decor, where Tyger Productions focused on using materials that were texturally significant without being abrasive. "Because the content and mission [of Home Base] is of such a serious nature, we didn't want to distract with bright colors," said Ty Kuppig, principal of Tyger Productions.
Photo: Ned Jackson 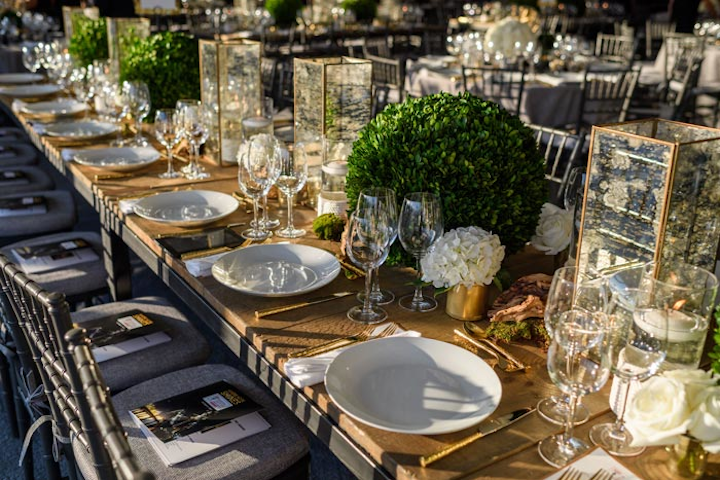 The long dinner tables that anchored the room were made of reclaimed wood, adding a further element of texture to the dining room. Accented by rows of mercury glass hurricanes and large preserved boxwood spheres that offered pops of color, together they created visual interest without disrupting guests' line of sight.
Photo: Ned Jackson 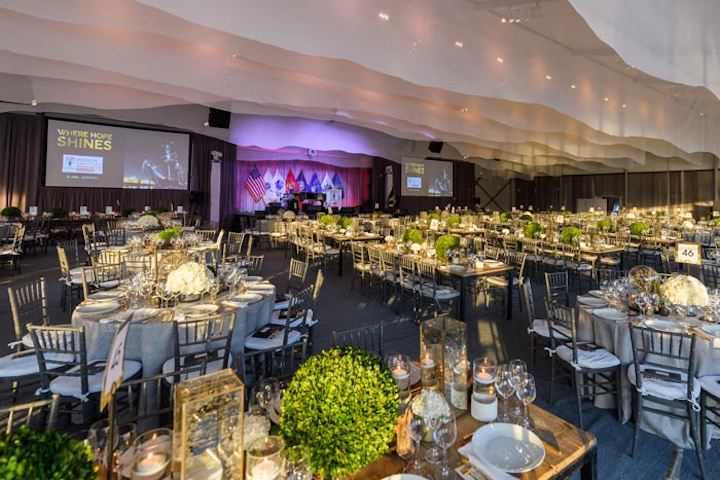 To balance the scale of the large custom structure tent, Tyger Productions designed and fabricated an installation of undulating translucent panels suspended from the ceiling. "The ceiling treatment softened the space," said Kuppig. "By working with the height of the space, we were able to create an intimate, cocoon-like setting." All chairs featured a "Battleship Grey" color with round tables paired with white cushions and long tables with tonal grey cushions.
Photo: Ned Jackson 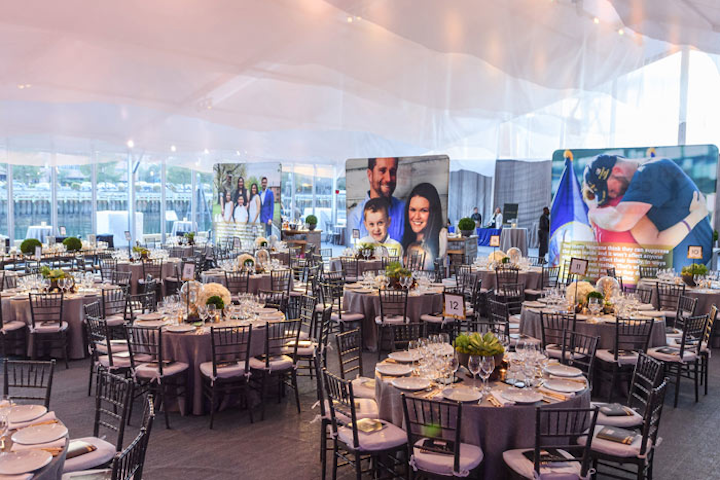 Clear, unobstructed views of the bay were afforded at nearly every seat inside the 13,000-square-foot tent, thanks to a dramatic 13-foot wall of glass that dominated one side of the tent, bringing the outdoors in.
Photo: Ned Jackson 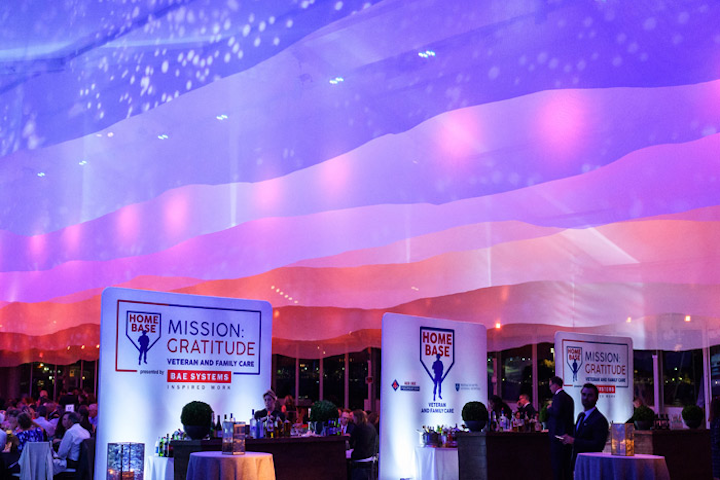