How This Financial Conference Avoids Being Stuffy 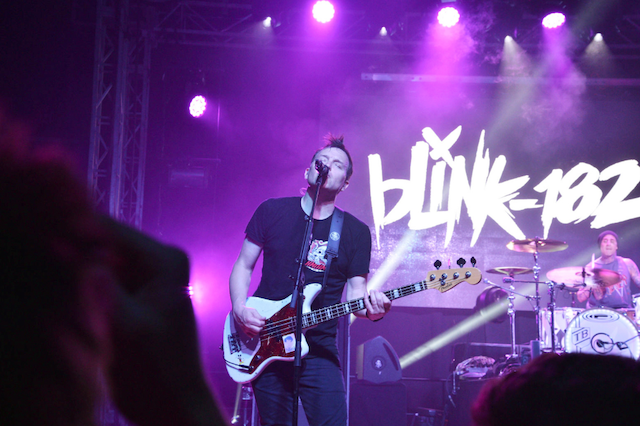 Night two was inspired by the pop-punk aesthetic of headliners Blink-182.Photo: Justice Photography

But don't mistake this for a stuffy business conference. The Roth Conference is just as well-known for its blowout, back-to-back after-parties that feature big-name performers (previous years have drawn the likes of Billy Idol, Macklemore, Joan Jett, and Wiz Khalifa), plus festive decor and charitable fund-raising.

This year, the parties on March 17 and 18 were designed and produced by Elite Productions International (EPI) and took place in the Salt Creek Beach parking lot adjacent to the hotel.

“I think it’s 100-percent effective to have an end-of-day place to go to after a full day of meetings—especially a killer party and a concert to end the evening," explained Lili Shadab, president and creative director of EPI, which has been producing the events for 22 years. "I’ve had conversations with some of the repeat attendees, and they all remember each event they’ve been to. It’s definitely a part of the conference that they are looking forward to each year.”

The first night of the conference fell on St. Patrick's Day, so organizers opted to incorporate the holiday into the party theme. Guests were welcomed to the event by bagpipers, costumed stilt walkers, and models wearing on-theme costumes. Large floral displays came in shades of green and white with pops of orange, and green velvet couches created comfortable lounge areas. Tinsel chandeliers were hung from the ceiling of the tent and were illuminated by custom green lighting. 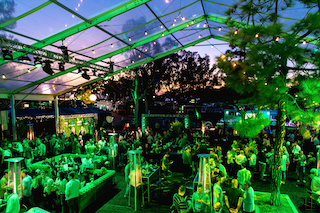 New this year was an increased focus on charitable giving: To enter the St. Patrick's Day festivities, each attendee was asked to donate at least $200 to the Boys & Girls Clubs of America. The charitable angle isn't new for the conference. It has previously raised more than $1 million for the Challenged Athletes Foundation, a cause the conference continued to raise money for during its daytime sporting activities this year.

"We believe strongly in our collective obligations to support charitable organizations, and know that many small donations can result in substantial amounts raised for people who are not as fortunate," explained the event's website. "We are proud that your and our efforts the past eight years have resulted in over $1 million being raised to support Challenged Athletes Foundation, and we look forward to raising meaningful money for B.G.C.A., beginning this year."

After the St. Patrick's Day party wrapped, EPI had fewer than 18 hours to break it down and rebuild for the following night's party and performance from Blink-182, which was open to all conference attendees. The tent and flooring remained, but the entire interior was revamped with furniture, props, and florals inspired by the band's pop-punk aesthetic and album covers.

“As the conference becomes larger each year, .... being creative with the space is becoming more of a challenge, especially since we are on public property in one the most affluent areas of the state," explained Shadab. "So, there are a lot of demands on the location and handling things up to a high standard. ... [But] we love the challenge of this project." 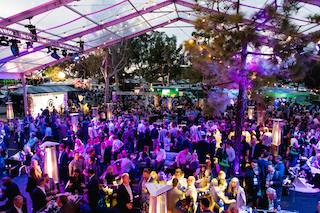 New floral designs had blue and silver hues that complemented the colorful sofas and Pop Art-style pillows. A custom-designed splattered paint canvas created the backdrops for the bar and stage, and a model dressed as a nurse—a nod to the cover of Blink-182's famous Enema of the State album cover—greeted guests.

Shadab says that her team's long-standing partnership with Roth Capital Partners has helped them really elevate the themes. “As designers and producers we have way too many ideas," she laughed. "It’s about using the ideas at the right time and place, and as always with budget considerations.

"I think it’s about knowing what ideas to use when and how to give the client the biggest impact," she continued. "That only comes with experience, and being able to get in your client’s head and understand what they really want to achieve.”

Scroll down for a look inside the two nights of events. 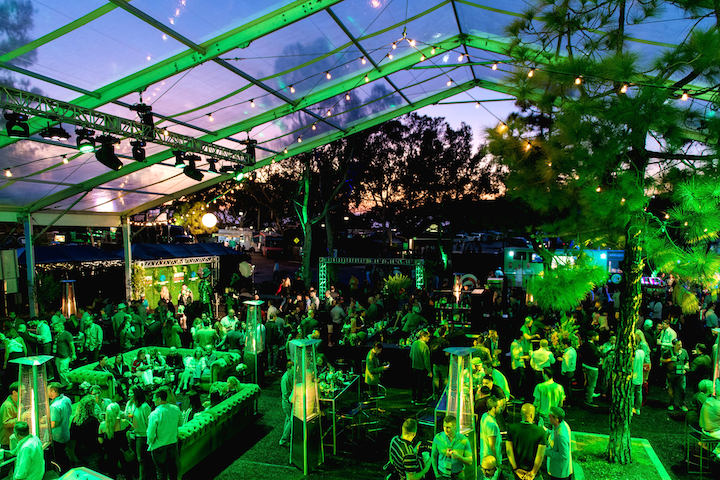 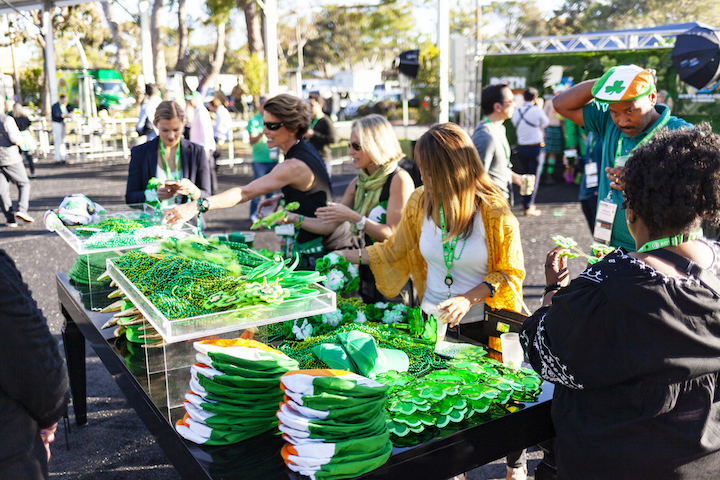 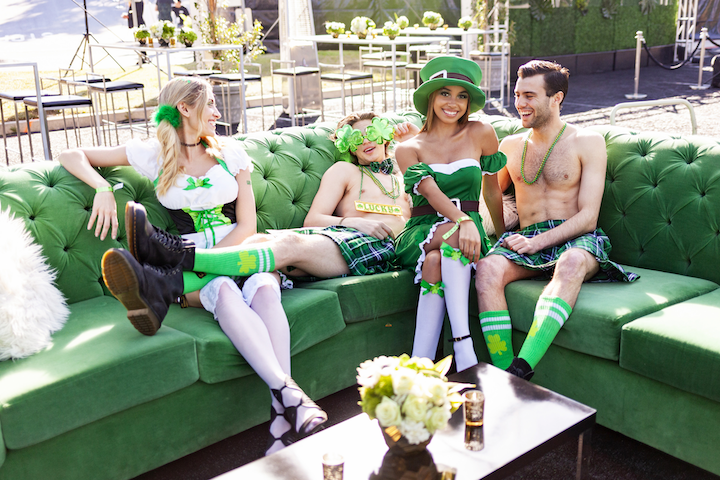 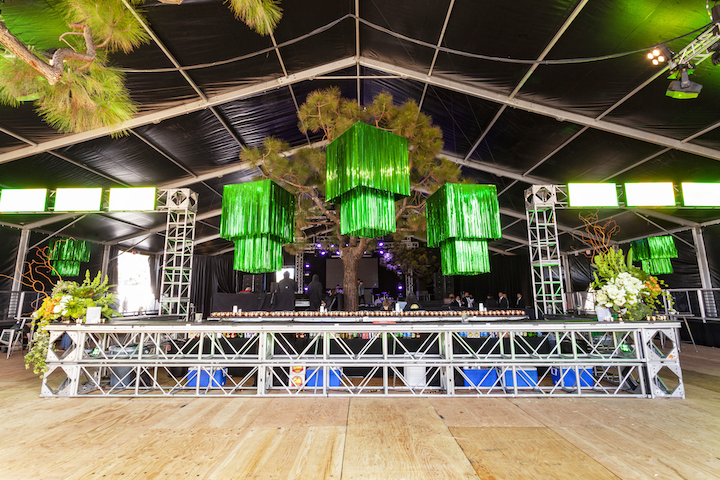 Green tinsel chandeliers hung from the ceiling of the tent, and organizers incorporated the parking lot's existing trees into the decor.
Photo: Justice Photography 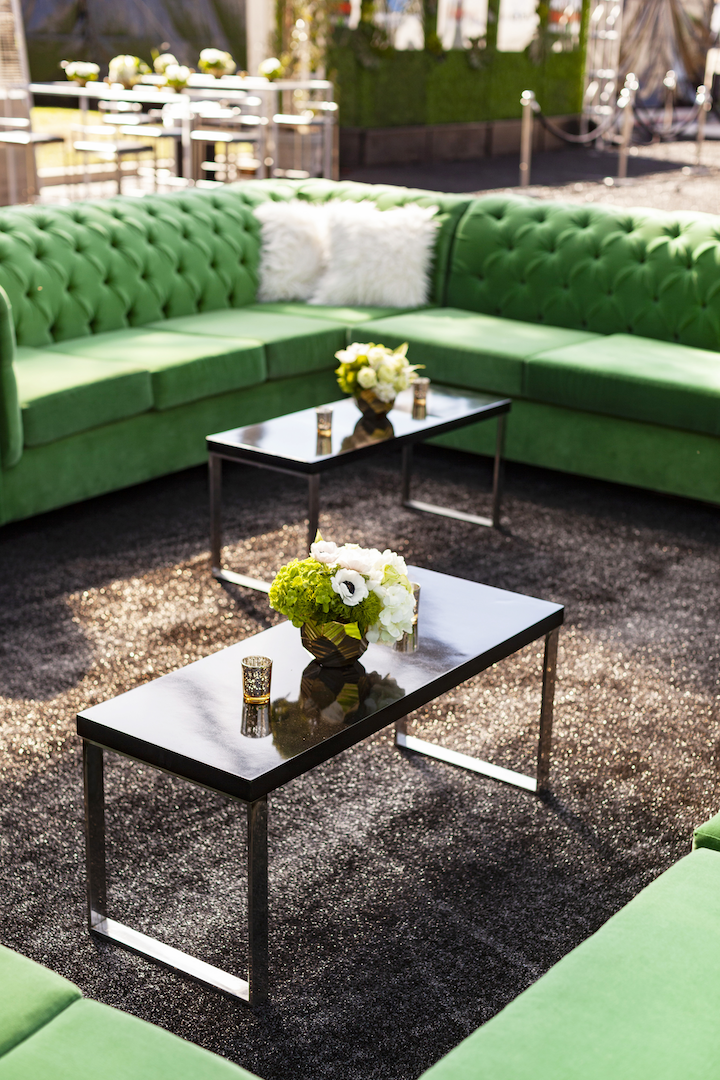 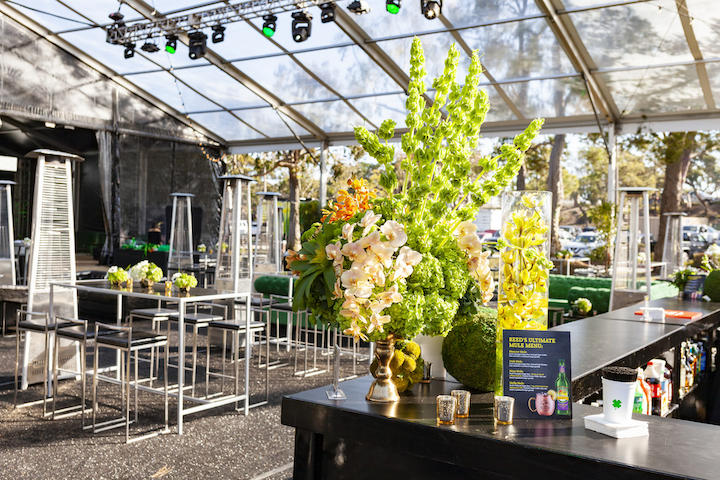 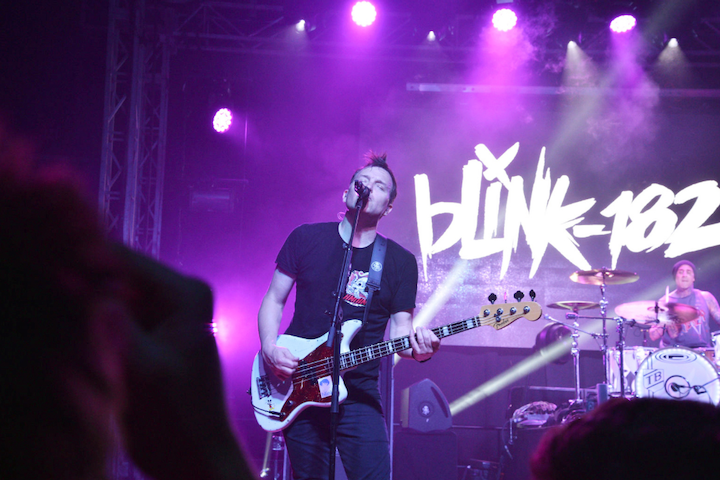 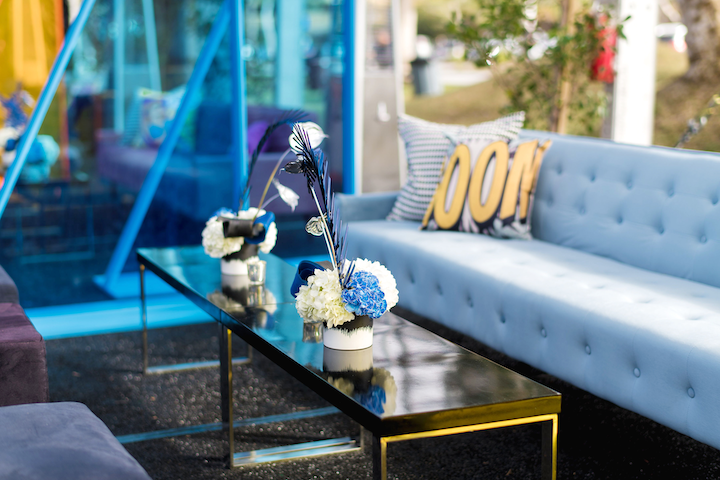 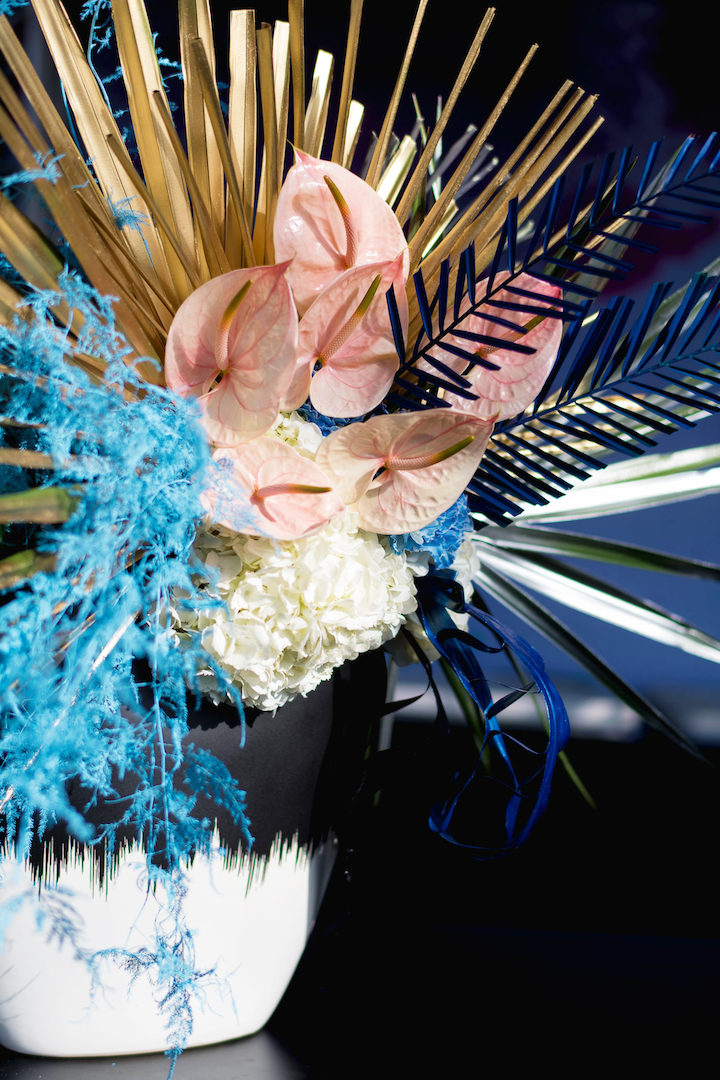 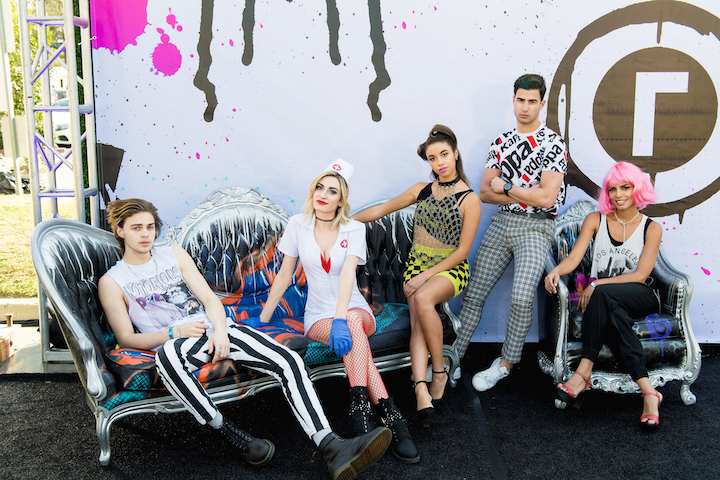 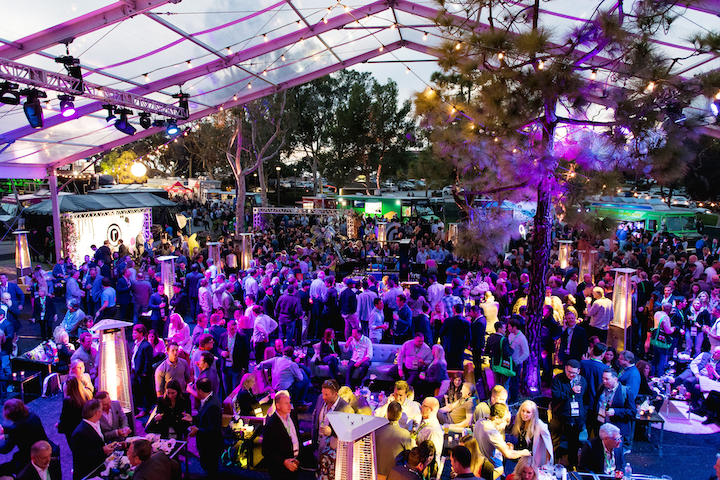