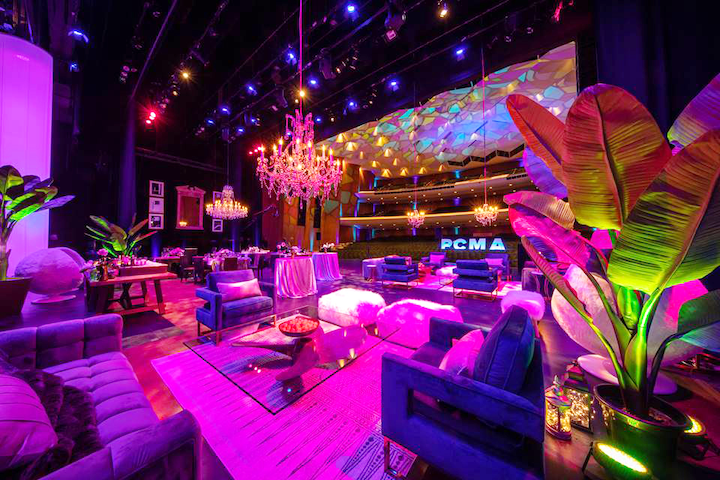 In early February, P.C.M.A. hosted a "Think Tank" meeting on the stage of the Terrace Theater at the Long Beach Convention and Entertainment Center. The theater was transformed with ornate chandeliers, a mix of banquet tables and lounge seating, and colorful projection mapping.
Photo: Courtesy of Long Beach Convention & Visitors Bureau

Moves & Milestones
Levy, Pazanti & Associates celebrated 40 years in business on February 1. "While we started out just doing fund-raising special events, we evolved just as the need evolved," said owner Judy Levy in an email to clients. "And as we move into our 41st year, we are as committed today as we were February 1, 1980. It is our mission to help others fulfill their mission."

In Case You Missed It
We rounded up 28 steal-worthy event design ideas from the most stylish Oscars parties. Click through to see inside star-studded bashes from Vanity Fair, Elton John, Warner Bros., and more.

Spotlight On
ABC celebrated the series production wrap for How to Get Away With Murder on February 8 at Yamashiro in Hollywood. The event, produced by Shannon Warner Events, featured a chalkboard step-and-repeat where the cast and crew signed their names, plus on-theme props and white roses splattered with faux blood. Attendees included series stars Viola Davis, Billy Brown, Jack Falahee, Aja Naomi King, and more. The drama's final season kicks off April 2. 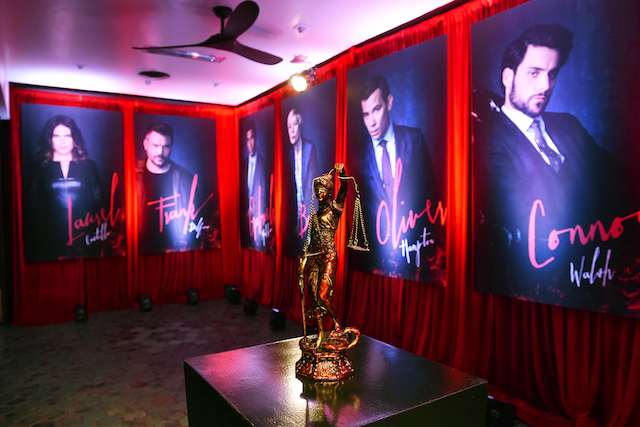 In the News
Returning to the Paramount Studios backlot for its second year, Frieze Los Angeles kicks off today with a new artist street fair. Los Angeles Magazine: "'The street fair is an evolution of the goal to establish a long-overdue annual moment for art in Los Angeles,' [said Bettina Korek, executive director of Frieze Los Angeles. '...It’s all a way of bringing some of L.A.’s different art worlds to Paramount—a reciprocal response to the fair catalyzing so much Frieze Week activity throughout the city.'"

Nerd Street Gamers plans to open a 26,000-square-foot esports venue in Los Angeles. Philadelphia Business Journal: "Construction on the space will start as soon as April for a summer 2020 opening. The Philadelphia-based esports venue operator claims it will be the largest public esports arena on the West Coast, with hundreds of consoles and the ability to host more than 1,000 people. ... The esports venue will take over an existing undisclosed space. Nerd Street declined to reveal the location. Known as Localhost Los Angeles, the venue will be the size of five-and-a-half N.B.A. basketball courts."

Chance the Rapper will host the 2020 Nickelodeon Kids' Choice Awards on March 22 at the Forum. The Hollywood Reporter: "Avengers: Endgame leads the nominations with a total of 11. Taylor Swift also was among the nominees, with five, followed by Frozen 2, Henry Danger, and Lil Nas X, with four each. First-time nominees include John Cena, DaBaby, Tiffany Haddish, Tom Holland, Brie Larson, Lizzo, and Megan Thee Stallion. Meanwhile, Will Smith—nominated for favorite movie actor—becomes the most nominated star in Kids’ Choice Awards history, with a total of 29. ... Beginning [Thursday], fans can cast votes on the official Kids’ Choice Awards website and on the Screens Up app."

Overheard
"They are the unsung heroes, the unknown stars of the place—the big smiling faces."
—Actor Michael Madsen discussing the four longtime valets at Chateau Marmont who regularly work some of Hollywood's most A-list events—including Beyoncé and Jay-Z's recent Oscars party at the iconic hotel.

On February 17, celebrity chef Massimo Bottura plans to open an outpost of Gucci Osteria at the Gucci boutique on Rodeo Drive. The 50-seat space will have Gucci Décor wallpaper, antique mirrors, herringbone wood flooring, and cherry red velvet banquettes; a terrace will have Italian marble mosaic floors and an antique wooden pulpit serving as the bar.

Surprise Metric of the Week
$5.4 million: the amount that the 18th annual "Night Before" party raised for the Motion Picture & Television Fund on February 8. The annual fund-raiser, which annually takes place the night before the Oscars, has raised $90 million in its history.

On the Scene
At Madonna and Guy Oseary's private Oscars party on February 9, photographer JR took unique photos of attendees Robert De Niro, Laura Dern, Renée Zellweger, and more posing with their awards or portraits of themselves or other entertainment luminaries.

And next week, Amazon Prime Video will host The Hunters Grindhouse Experience from February 20 to 22. The open-to-the-public event promotes the new Jordan Peele-produced series starring Al Pacino; it will transform areas of Highland Park, including Highland Park Bowl, into 1977 New York City complete with on-theme drinks, props, and interactive activities. Free tickets can be reserved at huntersonprimevideo.com.