What Will D.C. Entertaining Look Like Under President Trump? 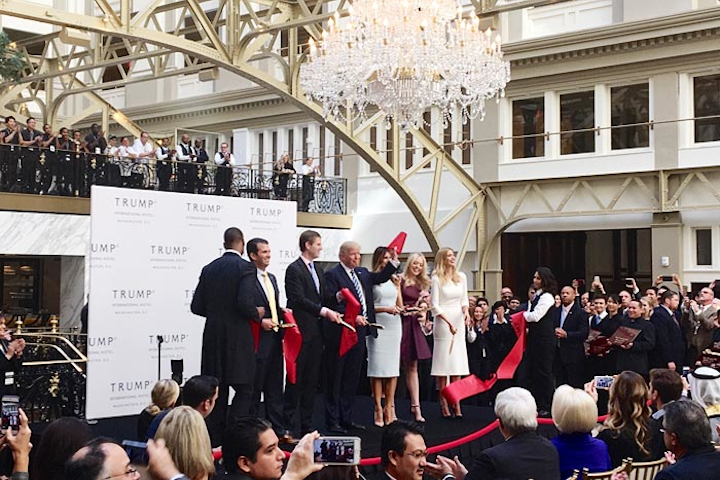 Event planners predict that President-elect Trump—shown here at the opening of Trump International Hotel, Washington, D.C., located down the street from the White House—will bring a new breed of event to Washington.
Photo: D. Channing Muller

In just a few weeks, the change of administrations in the White House will not only usher in new policies and power brokers—it will bring changes to how corporations, associations, and nonprofit organizations approach events, particularly in the nation's capital. BizBash spoke with Washington event planners, producers, suppliers, and venue operators to learn what they expect in the Trump administration.

“What we do know is that there will be change and it will ultimately be for the better of the industry. What we don't know are specifics,” says Tim McGill, C.E.O. of Hargrove Inc. “Each administration brings its own look, feel, and aesthetics [to events]. What we've seen has only improved with each administration, whether Republican or Democrat.”

So much about the Trump campaign has been a surprise, so how he will impact the industry won’t really be known until he takes office, according to event professionals.

“One of the biggest things we don't know is how active [the Trumps] will be in the community,” says Philip Dufour, C.E.O. of event production company Dufour & Co. “With the First Lady not moving here for the first six months, how will that affect the inherent events that come with the office? A lot is still very unclear.”

The most immediate impact on the industry has been surrounding the inauguration in January. Venues that had a solid booking for inauguration events pending before Election Night lost nearly all of them when the results came in.

“It was a drastic turnaround and lot of our groups were women- and government-focused groups,” says Shaun Hart, associate director of bookings and partnerships for the Shakespeare Theatre Company, which manages Sidney Harman Hall in Chinatown. “We’ve since then seen close to 20 new ones come in with groups that weren't doing something and now they are. That excitement [that came with Obama’s inauguration] is now coming in but it's not what we saw up front.”

After the inauguration, the change in administration means more government-related meetings and conferences, Hart says. The rest of corporate events in 2017 were locked in before the election, so the effect on future conferences and trade shows won't be seen until 2018.

“Washington has worked really hard in the past 10 years to bulk up the city in the tourism and hospitality market to compete against New York, Miami, and Los Angeles for conventions and conferences," says Hillary Miko, event designer at Syzygy Event Productions. "I hope that we can make it through half of 2018 without anything crazy going on, then I think very little will change."

Nancy Shaffer, C.E.O. and founder of event production company Bravo! Events, says that Trump’s business contacts potentially could bring more of their meetings and live experiences to Washington. “I think that what’s going to happen is the dynamic of who is looking to host or produce events in the city, who is the customer, will change,” she says.

Heidi Brown of AFR Event Furnishings, has also seen that shift in people hosting inauguration events. “Organization that have an adverse relationship to the administration’s agenda will have more presence than in the past,” she says.

The new administration may have a surprising impact on events for nonprofit organizations. The number of and budgets for nonprofit events may actually increase to attract more donors for those groups potentially losing federal funding.

“We’ve seen that the audience in D.C. wants to support the causes important to them, and if they feel the arts are in danger or L.G.B.T.Q. rights, they will take the extra step to do what they can to support,” says Roger Whyte, principal of RJ Whyte Event Production. “Because more people will be interested in helping [to offset government funding cuts], and more high-dollar individuals interested, there will be budget growth to go along with that.”

Shaffer, who has worked in the Washington events industry for more than 25 years, says the key to success for nonprofits will be in donor relations.

“I think the stewardship of donor base is going to become even more important than it currently is because of the temperature of what is going on,” says Shaffer. “I believe the competition for nonprofit dollars is going to be far greater.”