2018 Preview: What to Expect From the Year's Notable Events

The Winter Olympics, the Oscars, C.E.S., and the World Cup are some of buzziest events to anticipate in 2018. 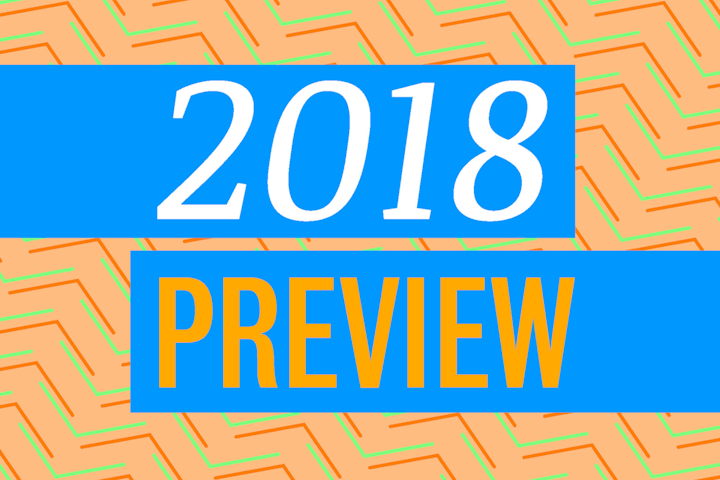 From events like the Oscars and TED, which have been directly affected by the recent rise in sexual harassment allegations in multiple industries, to major sporting events including the Winter Olympics and the World Cup, here's a chronological look at what to expect from major events in 2018.

Golden Globes
Many women attending the 75th Golden Globes will wear all black to protest sexual harassment in the entertainment industry. A slew of recent allegations of sexual misconduct brought forth by women and men against Hollywood producers, directors, and actors began when The New York Times published a story about sexual harassment allegations against Harvey Weinstein in October. The Golden Globes, the first major awards ceremony of the season, will take place January 7 at the Beverly Hilton.

C.E.S.
The world’s largest consumer electronics and technology trade show faced criticism earlier this month when it revealed a keynote speaker lineup that included zero women. Marketers and groups called on the event to add more women to the lineup, and Twitter announced it would host its own C.E.S. event with only female speakers. The Consumer Technology Association, which runs the event, responded to the backlash in a blog post. The show runs January 7 to 12 at venues including Mandalay Bay, the Las Vegas Convention Center, and the Sands Expo Convention Center.

Sundance Film Festival
One of the first high-profile film festivals of the year will screen 110 independent films from 29 countries—a slightly smaller lineup than the 2017 edition—at theaters in Park City, Salt Lake City, and Sundance Mountain Resort in Utah. A number of this year’s festival selections, which include films from 47 first-time directors, will focus on modern themes such as women’s issues and police brutality. The festival also will introduce two new awards: The “Festival Favorite” award, which highlights a single film from any category that audiences feel the most connection with; and the “Next Innovator” award, which will be given to a single film in the Next category by drag queen and TV host RuPaul, who was selected by the festival to present the award; the festival will pick a different presenter each year. RuPaul also will host a special retrospective event for his series RuPaul’s Drag Race, which highlights the festival’s move to further highlight television through specific programs and events. In addition, the festival will have a new screening venue, Park Ave, which will host most of its VR program. The 34th edition of the festival runs January 18 to 28.

Women’s March
The follow-up to this year’s inaugural Women’s March—a worldwide protest in response to the presidential inauguration of Donald Trump—will involve protests and demonstrations taking place January 20 and 21 in cities across the country. For 2018, organizers have planned a “Power to the Polls” Las Vegas event, which aims to build off the momentum of Democratic wins in the 2017 elections by targeting swing states, registering first-time voters, and getting more progressive female candidates elected to office. The Las Vegas event is driven by the upcoming 2018 midterm elections, in which all 435 seats in the U.S. House of Representatives and 33 seats in the U.S. Senate will be contested.

Grammy Awards
For the first time since 2003, the Grammys will take place in New York, with the ceremony taking place at Madison Square Garden. The music industry event is expected to rake in $200 million for New York’s economy, but after 2018 the awards will return to Los Angeles for at least four years. To increase member participation, the Recording Academy launched online voting for the first time this year. And while past editions of the Grammys have tended to overlook hip-hop music in the major categories, nominations for the upcoming event have embraced diversity, with Jay-Z and Kendrick Lamar garnering the most nominations. The 60th Grammys will take place January 28.

Super Bowl LII
Super Bowl LII will take place at U.S. Bank Stadium in Minneapolis on February 4. After Jay-Z reportedly declined to perform at the halftime show, the N.F.L. announced that Justin Timberlake will return as the headliner for the first time since performing with Janet Jackson in 2004, in which he infamously exposed Jackson’s breast. Jackson has been rumored to return to perform as well, based on the fact that her frequent collaborators Jimmy Jam and Terry Lewis are curating the 10-day “Super Bowl Live” music festival in Minneapolis leading up to the event. Kelly Clarkson also has been confirmed as the headliner of the N.F.L.’s official downtown game-day parties for ticket holders.

Winter Olympics
The XXIII Winter Olympic Games, which will take place February 9 to 25 in PyeongChang, South Korea, has become the subject of controversy and global concern, mainly because of the host city’s proximity to North Korea and the ongoing tension between the two countries. South Korean Olympic organizers are confident the event will be safe, but ticket sales have been down. The other major controversy surrounding the Games is the International Olympic Committee’s Russia ban. The I.O.C. officially banned Russia from the upcoming Olympics over its state-supported doping program, but certain Russian athletes will still be able to participate in specific uniforms. Qualifying athletes preparing for the event also are running into training issues, thanks to climate change. But despite the negative coverage leading up to the Games, NBC plans to live stream a record 1,800 hours of events.

Academy Awards
While there’s little chance the Oscars repeat the mistake of announcing the wrong film for Best Picture next year, one can always prepare for something unexpected during the film industry’s biggest night. Hollywood’s sexual harassment allegations have shaken up Oscar campaigns, leading to a petition calling for the event to ban Casey Affleck from presenting, and resulting in the Academy of Motion Picture Arts and Sciences establishing new rules for members after it expelled Harvey Weinstein. Earlier this year, the Oscars also banned lunches and dinners intended to promote eligible films. Films generating Oscar buzz this year include Get Out, Call Me By Your Name, The Shape of Water, The Post, Lady Bird, and I, Tonya. The 90th Oscars, hosted by Jimmy Kimmel, will be held at the Dolby Theatre in Los Angeles on March 4 and broadcast live on ABC at 8 p.m. EST.

South by Southwest
Austin’s annual celebration of technology, film, television, and music will return to various venues throughout the city March 9 to 18. The 32nd annual South by Southwest recently announced that speakers will include Lyor Cohen, global head of music at YouTube and Google—who will be the music keynote speaker—as well as Giphy C.E.O. Alex Chung, actor and musician Common, producer and writer Lena Waithe, and the cast of This Is Us. Previously announced keynotes will include Mother! director Darren Aronofsky, the Atlantic national correspondent Ta-Nehisi Coates, mayor of London Sadiq Khan, and Moonlight director Barry Jenkins. Earlier this year, two Democratic senators called on SXSW organizers to move the event out of Texas because of the state’s new anti-immigrant SB4 law. Organizers spoke out against the law, but stated that the festival won’t leave Austin.

TED2018: The Age of Amazement
TED recently faced controversy after the Washington Post reported in November that at least five women told officials they were harassed or groped during the annual flagship conference in Vancouver this year. TED responded by addressing the story and explaining it had conducted investigations and concluded that two men were the source of the complaints, and both have been banned from the conference. The theme of TED2018: The Age of Amazement will focus on ideas including new cutting-edge technology, advancements in science and inventions, social advocacy, and more. The event will take place April 10 to 14 at the Vancouver Convention Centre East.

C2 Montréal
The seventh edition of the international marketing and advertising event will once again take place at the Arsenal from May 23 to 25. With the theme of Transformative Collections, the event aims to return to its roots and focus on what it means to be a leader and the solutions found at the intersection of commerce and creativity. The event is expected to attract around 6,000 leaders in the industry and will also introduce a new programming format that will involve a series of daily blocks: the Inspiration series, focused on cutting-edge projects and ideas; the Experts series, exploring major trends that impact a specific sector; the Intersections series, that curates collisions between tracks, sectors, ideas, and points of view; and the Big Deal series, which will highlight innovators. Confirmed speakers include Filipino scientist Aisa Mijeno, co-founder and C.E.O. of sustainable alternative lighting product SALT; Daniel Franklin, executive editor of the Economist; and Katharina Borchert, chief innovation officer of Mozilla.

FIFA World Cup
Russia may be banned from the upcoming Winter Olympics, but the country is still slated to host the 2018 FIFA World Cup. However, the upcoming event hasn’t been without controversy. On Wednesday, a Russian deputy prime minister swarmed by allegations of involvement in the country’s doping program announced he will step down as head of the local organizing committee for the World Cup. The 21st edition of the quadrennial international soccer tournament, which runs June 14 to July 15, will include 64 matches taking place at 12 venues in 11 cities. The final match will take place July 15 at Luzhniki Stadium in Moscow. The first World Cup held in Europe since 2006 will feature 32 national teams, including first-time qualifiers Iceland and Panama and defending champions Germany. For the first time since 1986, the U.S. failed to qualify for the World Cup after the men's national team lost to Trinidad and Tobago in October.

San Diego Com-Con
Tickets for Comic-Con International 2018, also known as San Diego Comic-Con, have already sold out despite the lineup having yet to be announced. But the expected lineup will include panels for upcoming blockbusters including X: Men: Dark Phoenix, Venom, Aquaman, and Fantastic Beasts: The Crimes of Grindelwald, as well as series including Stranger Things and The Walking Dead. San Diego Comic-Con also recently won a trademark court dispute with a Salt Lake City pop-culture convention over rights to use the term “comic con.” The 49th annual event will take place July 19 to 22 at the San Diego Convention Center.