Displaying the intense loyalty for which they are widely known, fans of Twilight showed up in downtown L.A. on Thursday morning ahead of Monday night's official premiere of the series' latest installment, The Twilight Saga: Breaking Dawn—Part 1, and made themselves comfortable. The group, estimated at about 1,200 people (twice as many as at the previous film's premiere), filled four camps downtown in the Nokia Plaza at L.A. Live and Chick Hearn Court. Summit Entertainment, led by executive vice president of publicity Eric Kops, worked with Chad Hudson Events to produce a multiday program of activities and surprises—not to mention a goldmine of media attention expected to far exceed last year's estimated $3 million value.

Summit and Hudson drew campers by posting information about the premiere—and related details like parking—to fan sites and social media. Once they arrived, the campers were undaunted in the face of rain and chilly weather. Their numbers necessitated a fourth camp, when only three were planned. They were rewarded for their endurance with surprises including a 15/40-produced concert with musicians on the film's soundtrack on Saturday, a book signing and giveaway from author Stephenie Meyer, and a visit from cast members including Charlie Bewley, Kiowa Gordon, Tinsel Korey, and Kellan Lutz—all of which sent the masses into hysteria. The biggest surprise of all: Staffers handed out premiere tickets to the entire group just ahead of the movie's start time.

"We took the fan-camp concept and really built on it. It took on a life of its own," Hudson said of the assembly, which grew organically over the years of premieres for the series, since people gathered in the streets in Westwood. "We want to take care of them. That's what it's all about." Amenities included portables toilets and Wi-Fi, plus food deliveries by the likes of Pinkberry, and Sunday-morning breakfast. A photo booth allowed fans to snap shots with the prop wedding cake from the film, and cardboard cutouts of cast members. (The cake later appeared at the party, where Hudson replaced its fake flowers with real ones.)

Monday night brought the sprawling arrivals spectacle, produced by 15/40, and the official premiere, with 5,000 guests seated in the Nokia Theatre. The campers in the balcony added a soundtrack of deafening hoots and hollers.

After the show, 3,000 headed up to the Event Deck for a tented party that borrowed its look and feel from the movie's big wedding and honeymoon scenes. Decor elements in the fog-blanketed tent included a flower-draped wedding arch and canopy that looked plucked from the movie, a dramatic central water wall from Angel City Designs, palm trees and sand, a beach vignette complete with projected ocean from Kinetic Lighting, and a giant Airstar moon—the single element that has carried through Twilight's premiere parties over the years.

As they did last year, organizers reduced costs by combining efforts with two other events in the location: Relativity's premiere for Immortals on Friday (Relativity is another of Hudson's clients), and the American Music Awards coming up November 20 (not a Hudson production). "We came up with a list of costs that could be shared three ways, and we were able to save thousands of dollars. It's not chump change," Hudson said. The arrangement allowed each event to happen on a larger scale, and Hudson said it appeared seamless to the guests. "No one knows the projector in the projector booth was used last week," he said. "No one knows the speakers above their heads didn't come down [only to go back up]. We realize it's expensive for companies and studios to bring premieres downtown, but you can make it happen." 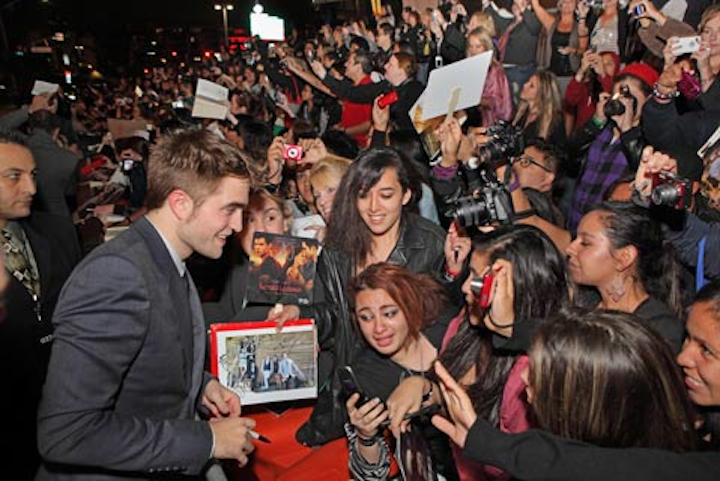 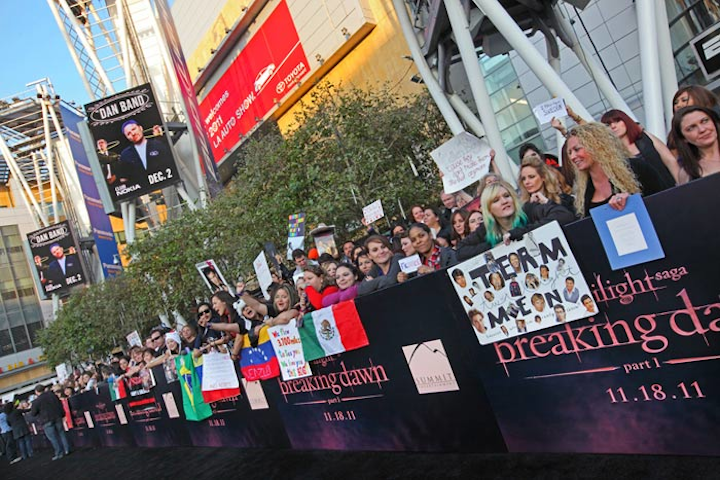 About 1,200 fans clogged downtown streets ahead of Monday's premiere of the latest installment in the Twilight series.
Photo: Line 8 Photography 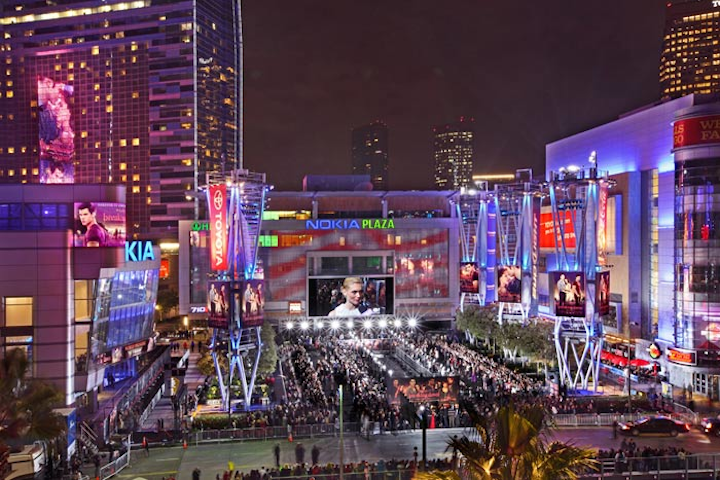 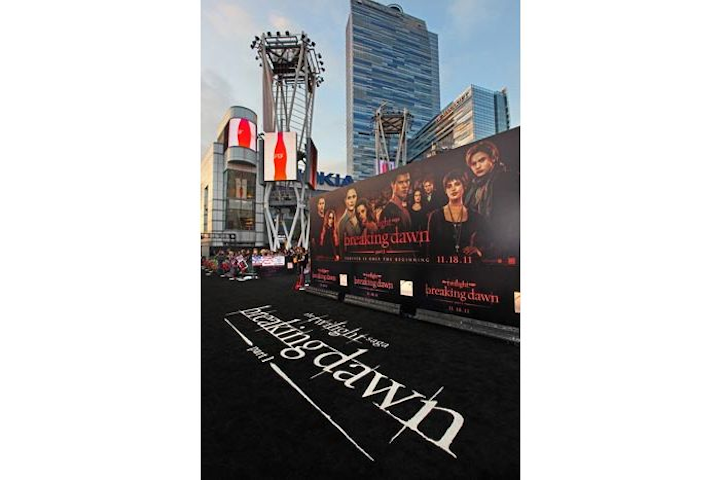 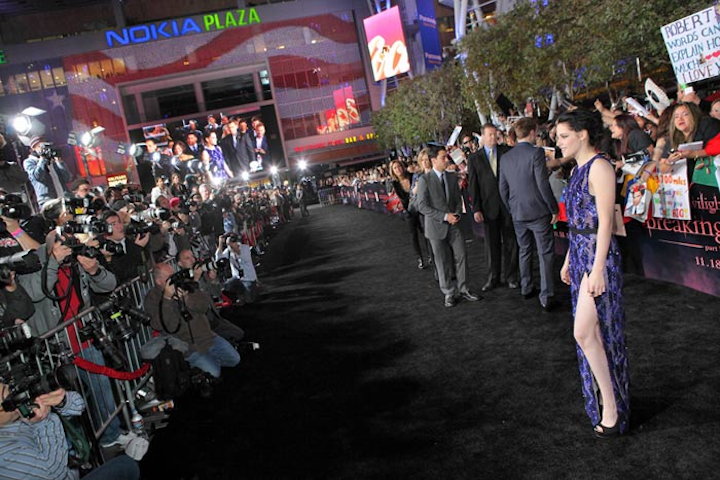 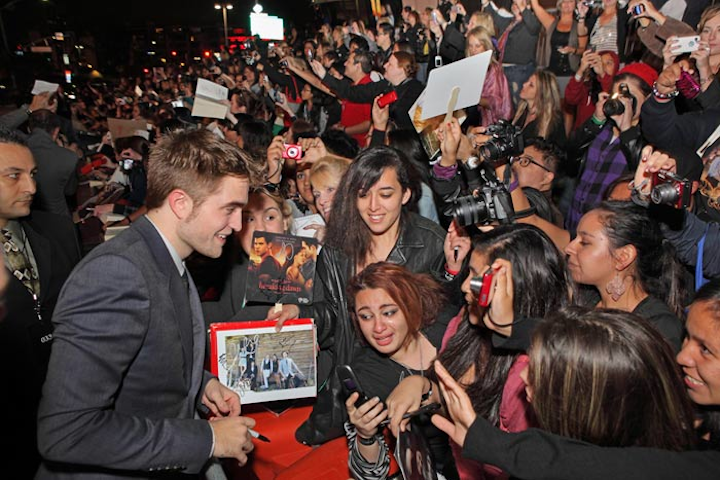 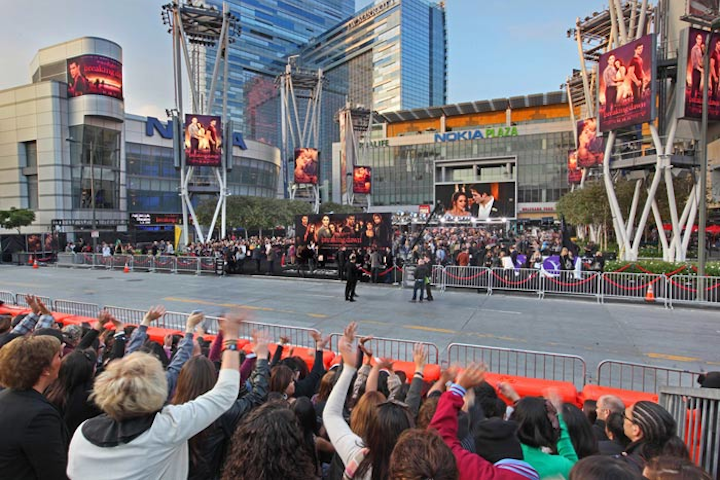 At the last minute before the screening began, the enthusiastic crowd was surprised with tickets for the show.
Photo: Line 8 Photography 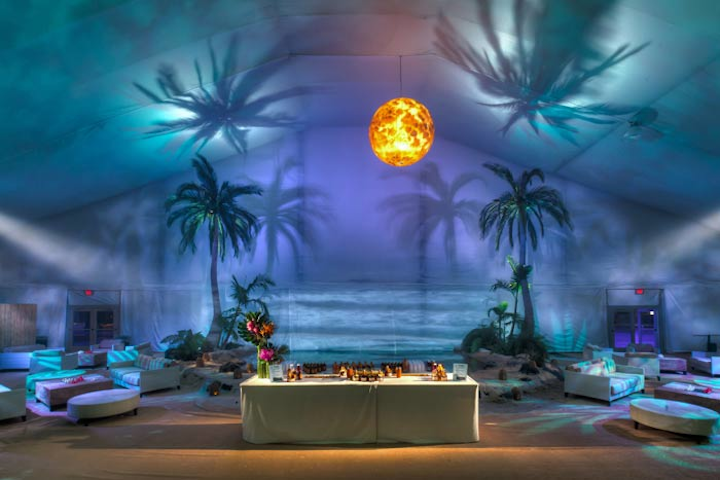 An Airstar moon hung over the premiere party. It's the single decor piece that has appeared at each premiere in the series.
Photo: Sean Twomey/2me Studios 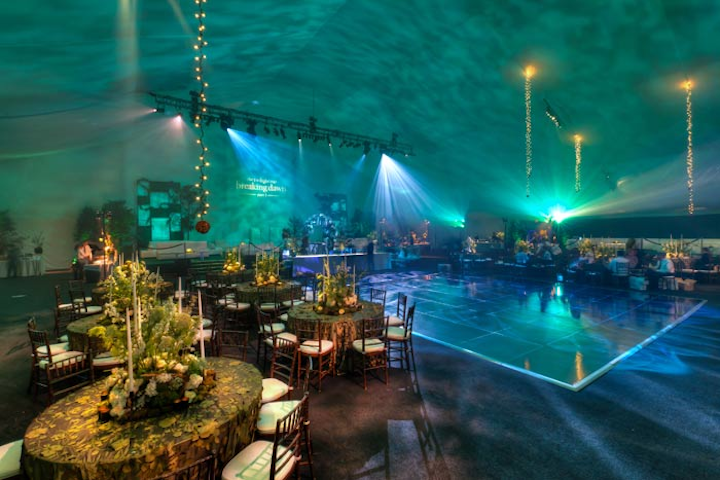 The premiere party borrowed its look and feel from the movie's wedding and honeymoon scenes.
Photo: Sean Twomey/2me Studios 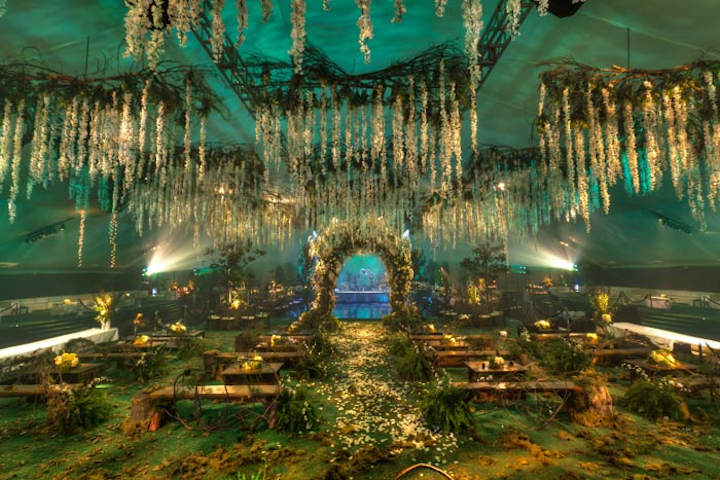 A dramatic floral canopy and wedding arch in the center of the party space evoked the wedding scenes in the film.
Photo: Sean Twomey/2me Studios 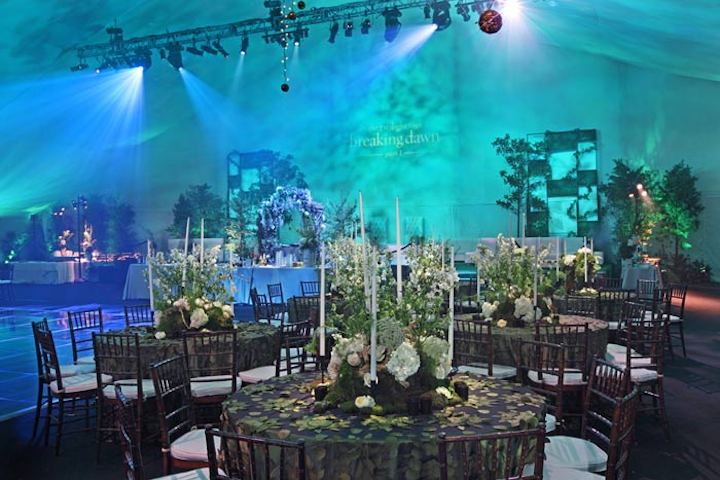 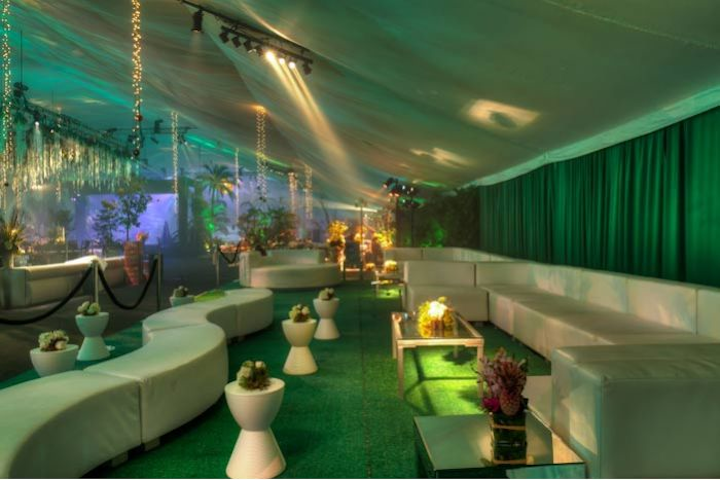 Elevated V.I.P. areas at the party (not to mention a considerable security detail) protected cast members like Taylor Lautner from being mobbed by admirers.
Photo: Sean Twomey/2me Studios 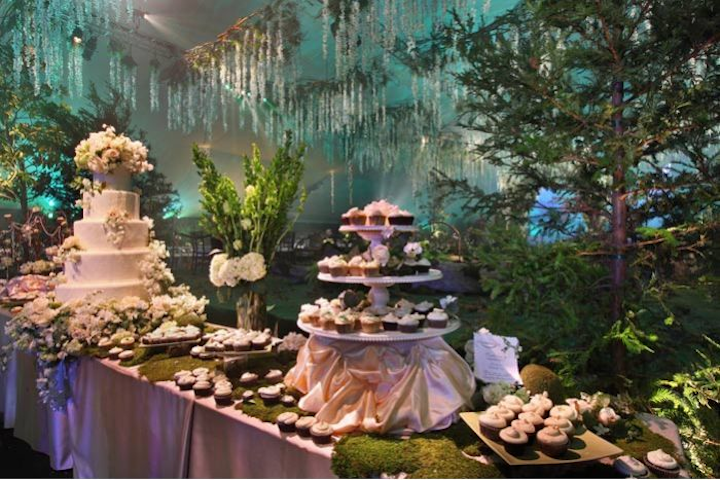 The prop wedding cake from the movie was on display at the premiere party.
Photo: Line 8 Photography 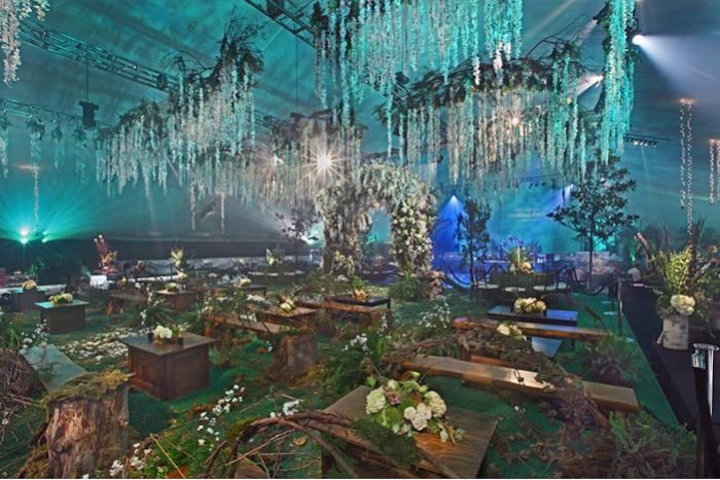 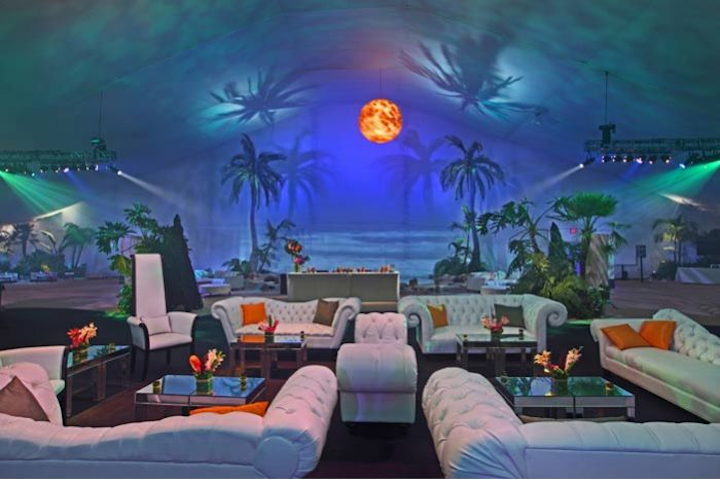