Never mind the relationship drama between stars Kristen Stewart and Robert Pattinson: Twilight Saga: Breaking Dawn—Part Two is among the year's most hotly anticipated releases, and it premiered last night in Los Angeles with a screening and party worthy of all the pomp surrounding the wildly popular franchise, which comes to a close with this installment.

Anticipation for the premiere, a project led by Summit Entertainment senior vice president of publicity Eric Kops, began long before the screening, when on Thursday fans began assembling an organized campground downtown, where they'd stay for five full days. Kops estimates the fan camp in combination with the premiere generates publicity in equivalent to "tens of millions of dollars"—in the U.S. alone, not to mention global impact. "This year is going to be much bigger than last year," which also created millions in publicity, said Kops. "The value of the publicity generated is definitely going to be significantly more. In the fan camp alone, I saw print, TV, and radio outlets from all over the world."

Chad Hudson Events oversaw the organized camping of fans ahead of the screening, and demand was so high for spots this year that organizers resorted to a lottery system to whittle the crowd down to about 2,000. (By comparison, the series' first premiere at the Hammer in Westwood drew 400 guests and a smattering of fans who camped out and gathered organically. Last year drew about 1,200 organized campers.)

The fans lived for days on a completely closed Chick Hearn Court, as well as a second overflow fan camp at the Event Deck at L.A. Live—but they weren't bored. For the duration of the five days leading up to the premiere—which saw local weather finally take a turn for the cold and even rainy, after temps in town had felt downright summery clear into November—fans had access to activities, like screenings of past Twilight films, plus a number of planned surprises on the Nokia Plaza. This year's setup included a stage from which announcements were made and where people gathered in an organized fashion. The biggest coup? All campers were invited inside to see the screening in the Nokia Theatre as well as overflow seating at the Regal Cinemas.

On the big night, the throng of media folks included 24 satellite trucks and news fans, 144 photographers and 75 TV crews from media around the globe, and six separate U.S. syndicated interview podiums.

As for the party following the screening, a crowd of about 3,500 guests (swelled from 3,000 or so last year) moved upstairs to the Event Deck and found a look that nodded to this and all the other films in the saga—"kind of like a museum" honoring the series' history, Hudson said.

Along Came Mary's menu included nods to past films as well, with, for instance, Brazilian stations with empanadas, manchego cheese toast, and paella; Italian banquet favorites like cured meats and cheeses; back-to-school-style cafeteria fare like meatloaf and mashes potatoes served on trays; and Seattle-inspired dishes like fish tacos in warm corn and flour tortillas.

"It's the biggest thing ever. It's going to be a huge event, and you're focused on getting it done," said Kops during a brief lull hours before the arrivals began for the final film in the series. "There'll be some tears shed [among the studio team]. We've all grown up together. It's been a journey for everybody. It's definitely emotional." 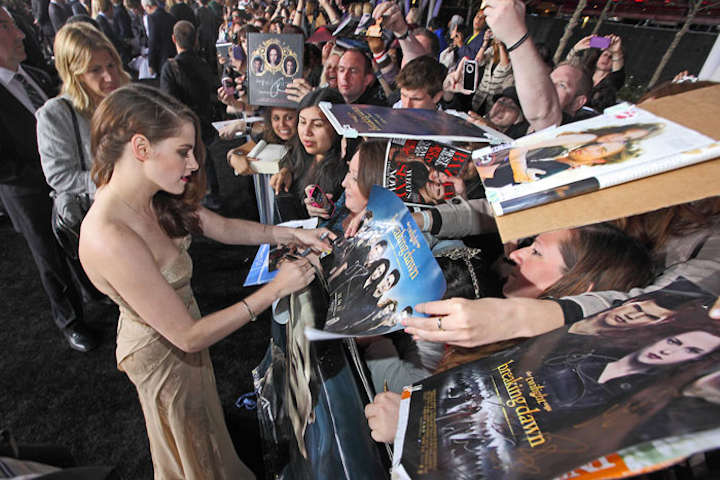 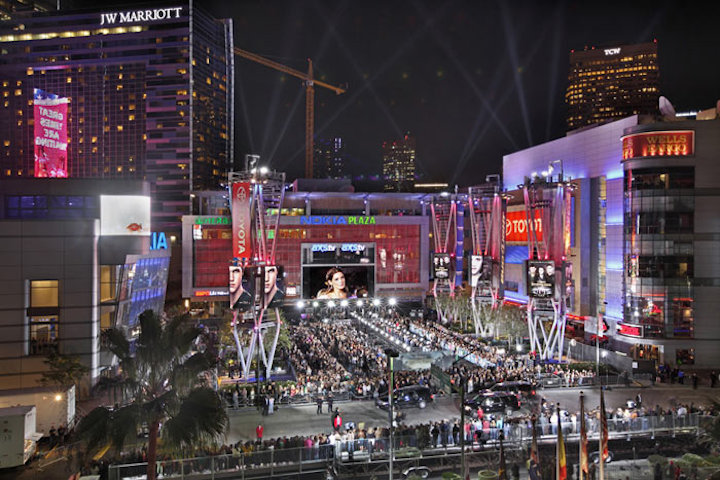 The Twilight Saga: Breaking Dawn—Part Two, the final installment in the series, beckoned its stars, screening and party guests, and 2,000 campers to the area in and around L.A. Live downtown.
Photo: Line 8 Photography. All rights reserved. 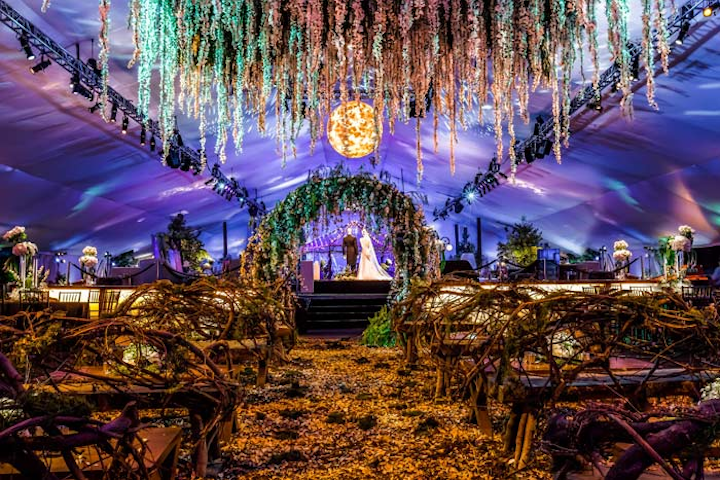 An Airstar moon hung over the tented party space at L.A. Live's Event Deck—as it has for every past premiere bash.
Photo: Sean Twomey/2me Studios 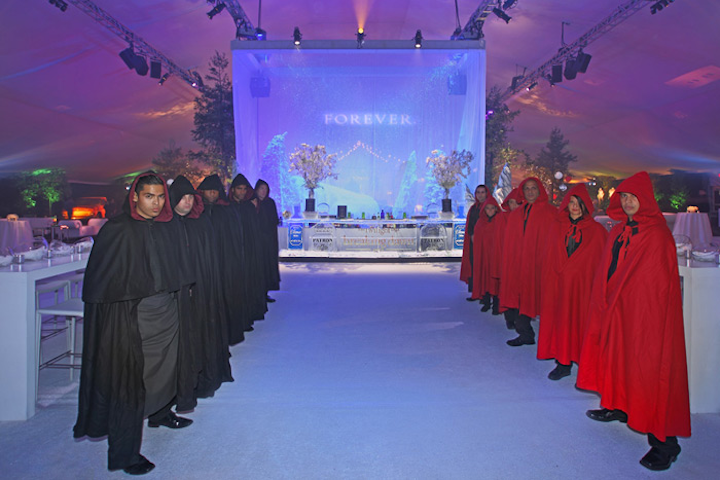 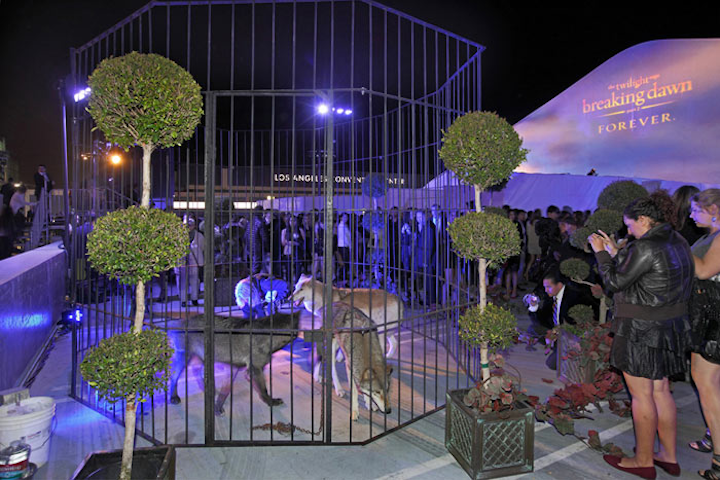 Live wolves roamed a pen just outside the party tent on the Event Deck at L.A. Live.
Photo: Line 8 Photography. All rights reserved. 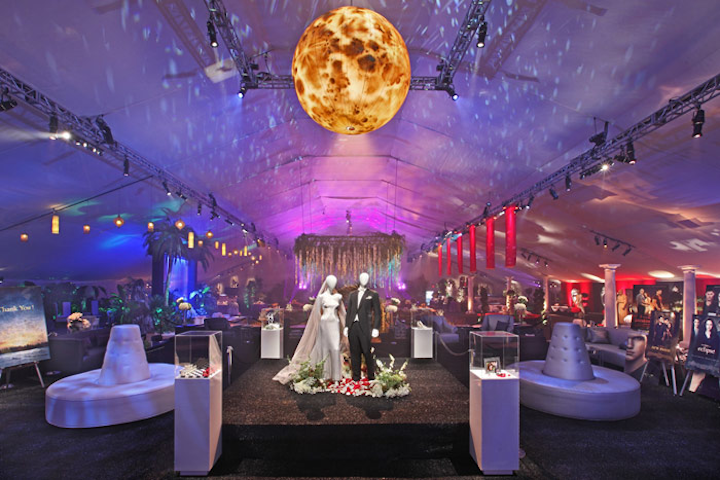 For the first time on public display, the wedding costumes from the series served as a centerpiece in the party space.
Photo: Line 8 Photography. All rights reserved. 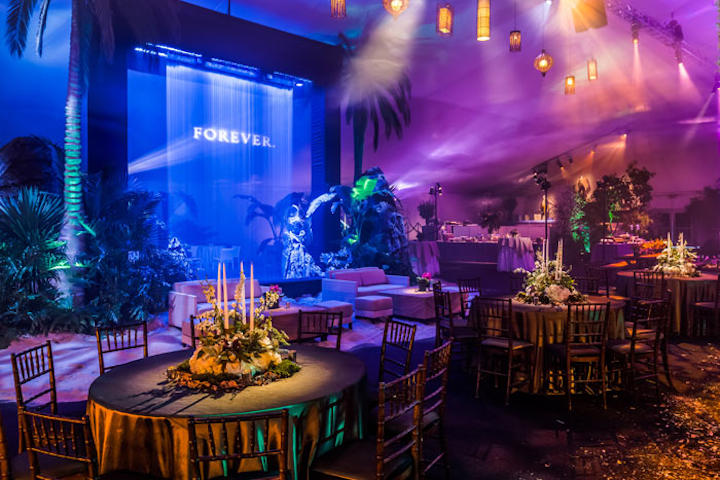 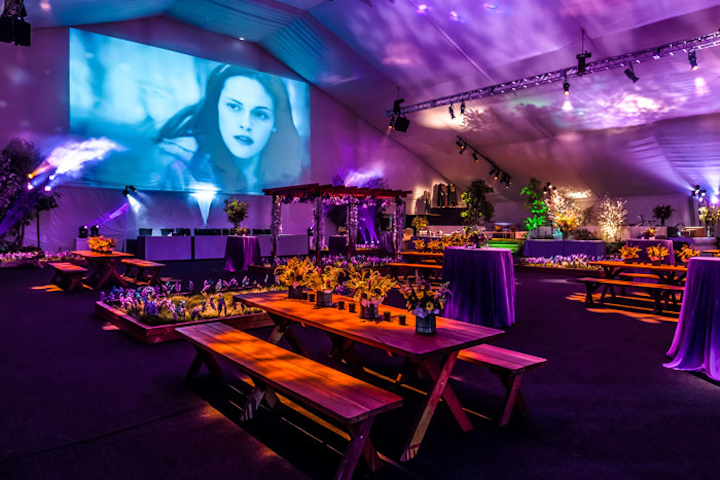 Twilight clips ran on the back wall of the party tent.
Photo: Sean Twomey/2me Studios 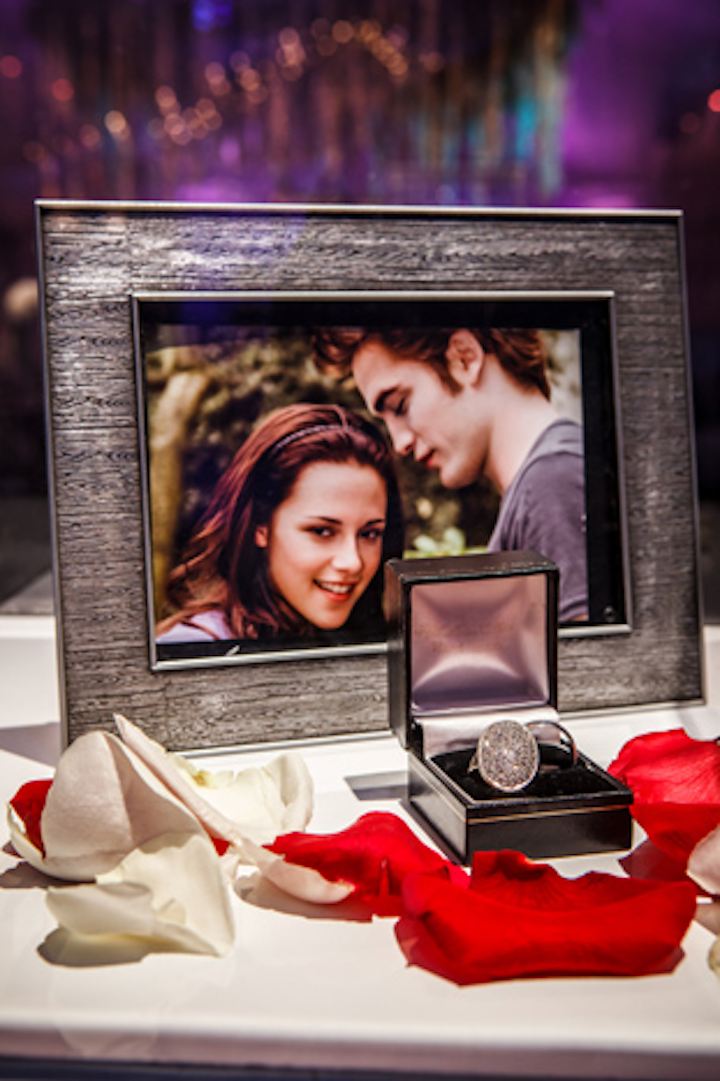 The prop rings from the series were on display in the party space alongside a photo of the stars.
Photo: Sean Twomey/2me Studios 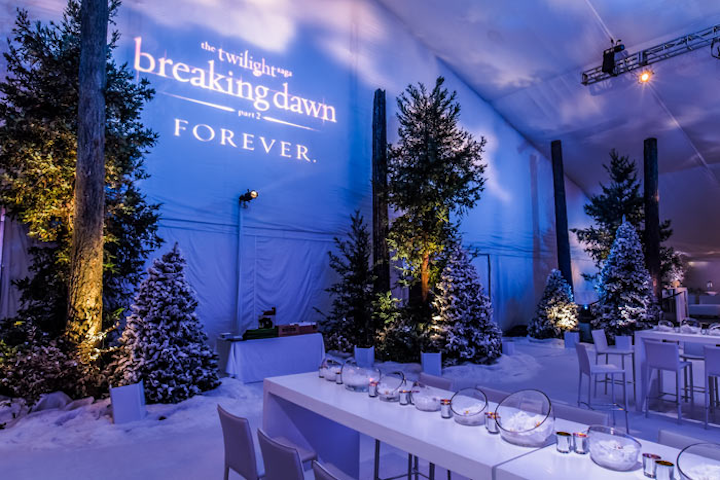 Gobos from Kinetic Lighting projected the movie's title on the walls of the tent.
Photo: Sean Twomey/2me Studios 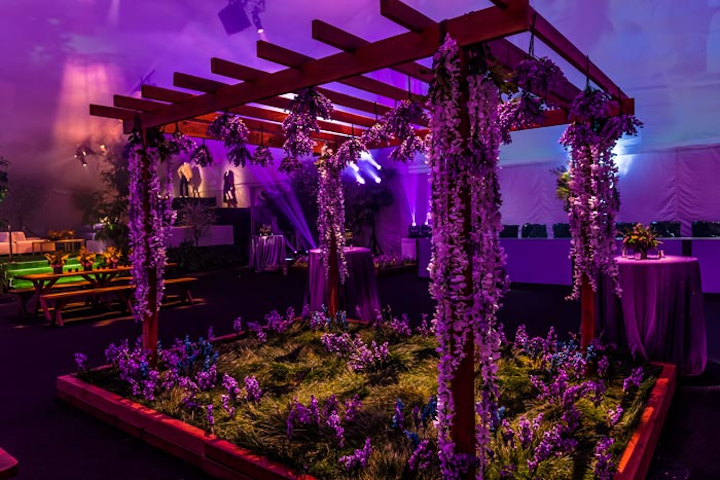 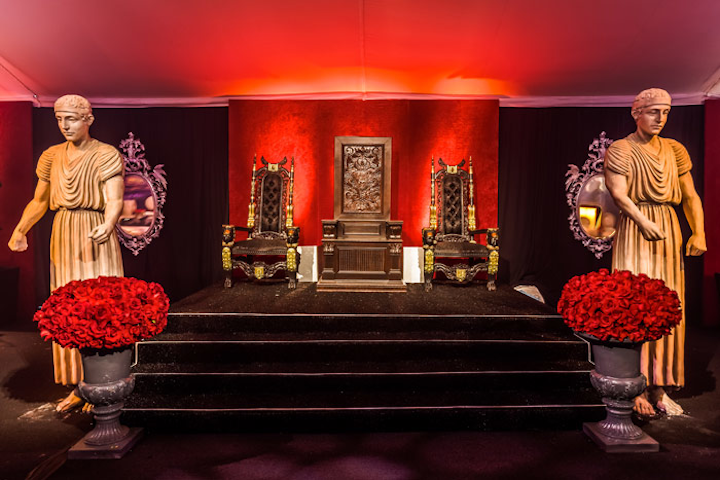 A vignette meant to evoke the series' Italian settings made a dramatic impact in one area of the party space.
Photo: Sean Twomey/2me Studios 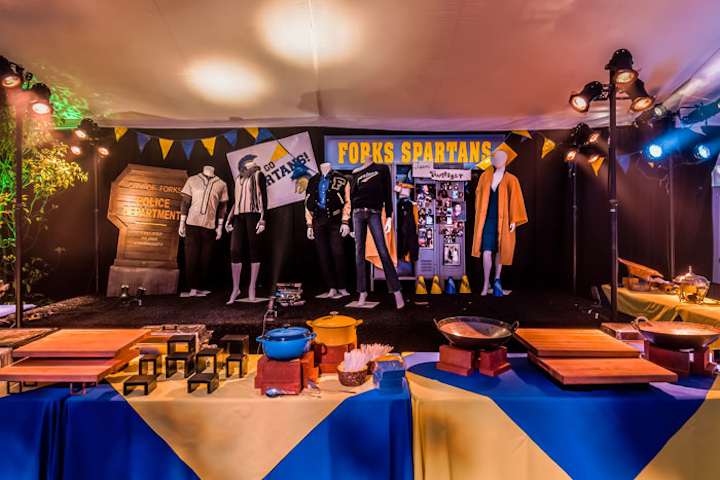 Areas within the party were meant to evoke the film's school settings, and cafeteria-style buffets from Along Came Mary advanced that theme.
Photo: Sean Twomey/2me Studios 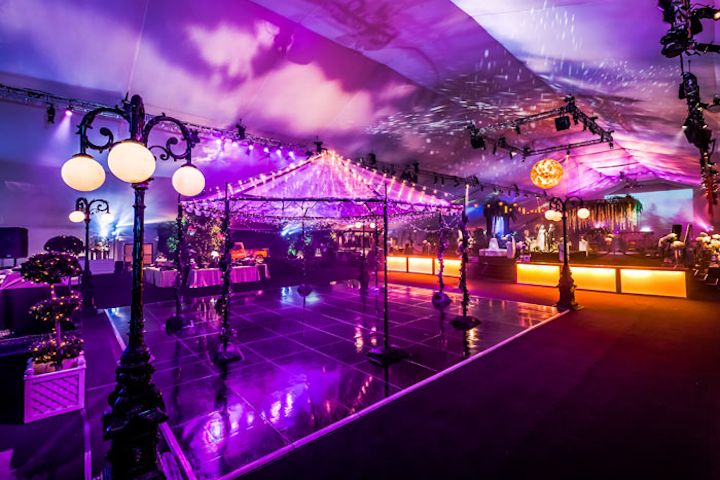 One area of the party space was meant to emulate the school dance scene from an earlier installment of the series.
Photo: Sean Twomey/2me Studios 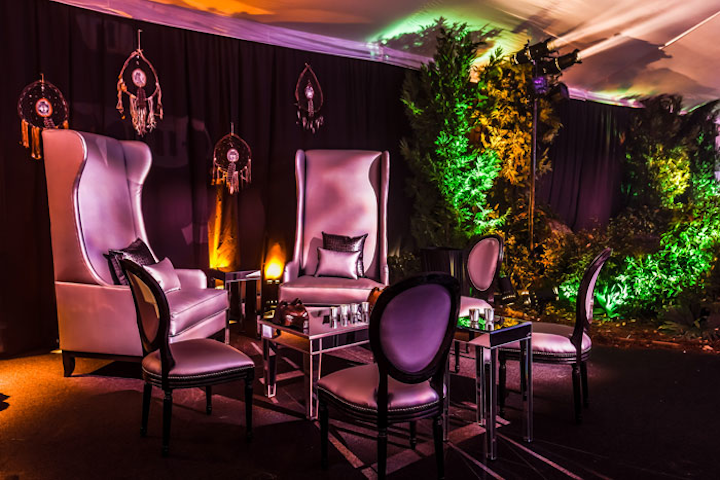 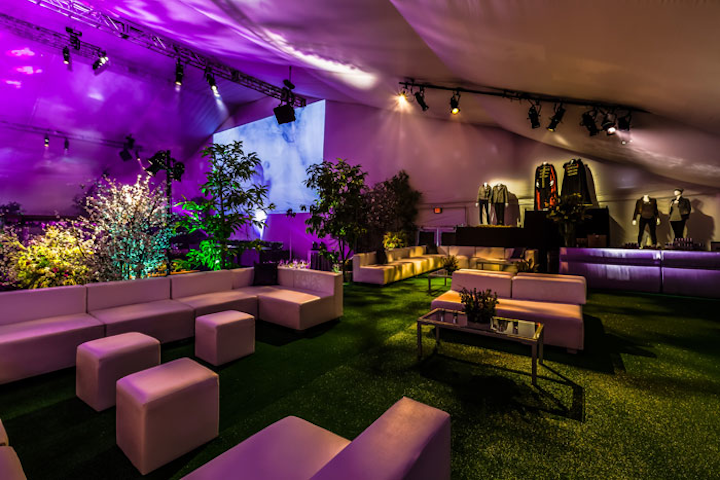 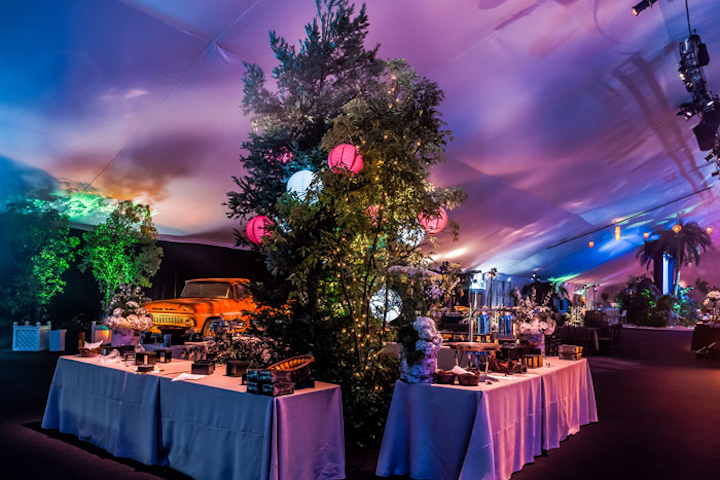 The pick-up truck from the movie stood sentry on one side of the party tent, behind a tree decked with lanterns.
Photo: Sean Twomey/2me Studios
More in Programming & Entertainment