How This Event Avoided Insulting an International Audience

Far from the minimalism of its holiday red kettle charity collection efforts, the Salvation Army celebrated its 150th anniversary with a massive convention in London from July 1 to 5. The event had a “Boundless” theme, drawn from a song Salvation Army founder General William Booth wrote for the Christian charity, and drew nearly 16,000 people from 126 countries to the O2 Arena.

While an in-house team of six, including international congress coordinator Eddie Hobgood, oversaw the event, the Dallas-based company Corporate Magic produced it—working over a period of more than two years given the program's enormous scale.

The convention included seven general sessions, a grand march down the mall leading to Buckingham Palace, and performances by 40 international groups—exhibiting cultural traditions like hula dance and Chinese lion dancing. Producers even commissioned an original musical for the event, and an exposition hall showcased an interactive heritage display.

With so many countries represented at the event, observing international protocols and demonstrating cross-cultural understanding were essential to its success.

To keep the wide-ranging delegation comfortable and avoid making any cultural blunders, Corporate Magic took extra steps to vet content. “Whether it was translation services or cultural sensitivity, everything that hit the screens or was incorporated into the program had to be analyzed for how it would come across to people from more than 100 countries,” said Corporate Magic's senior international account manager Meg Lohr. "Every word, every joke, every mannerism was reviewed to make certain that the message was delivered accurately and, of course, that nobody was inadvertently offended or insulted.”

In addition to sensitivity concerns, the multinational event posed certain logistical challenges: Delegates scheduled to be part of the productions were flying in from all around the world, so rehearsals couldn't take place until everyone was on site in London.

"Unfortunately, several African attendees were denied visas, but no one bothered to tell the hosts,” Lohr said. "Since they were part of the production, Corporate Magic was forced to make revisions and accommodations at the eleventh hour.” The team also sent out the programs for the show well ahead of time so everyone would have the words in advance and could participate. "This required even more advance planning than usual,” she said.

The U.S. company working in the U.K. also encountered challenges when it came to legalities. "Due to much different, stricter laws in the U.K., the logistical aspects of the show were much more difficult.”

For instance, the U.K. has particularly stringent health and safety regulations, which required Corporate Magic to hire a coordinator to oversee those issues in the host country. The team put together a 200-page manual outlining how they would address every conceivable health and safety issue that could arise.

The team made additional accommodations for labor laws and load-in and rehearsal times. Work was required to shut down by 10 p.m.—which forced organizers to come up with workarounds on tight load-in deadlines. For example, Corporate Magic set up a separate venue the team called "the slab," a large slab of concrete outside the O2 where they rehearsed each of the production numbers even as another was taking place on stage. 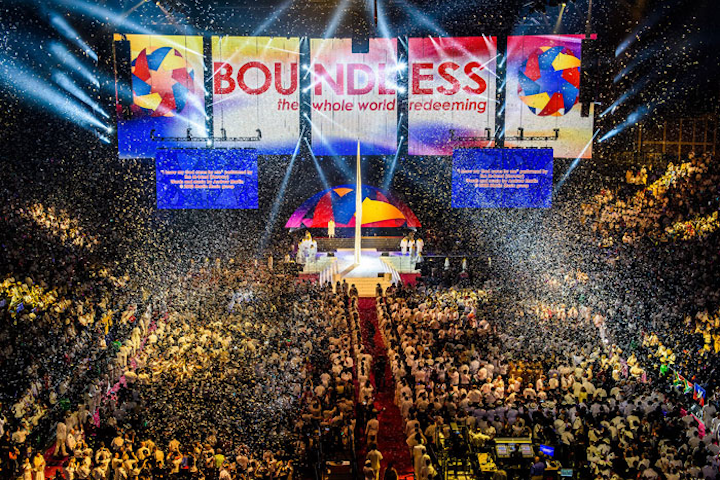 About 16,000 guests attended the opening program for the international congress celebrating 150 years of the Salvation Army.
Photo: Graham Carlow 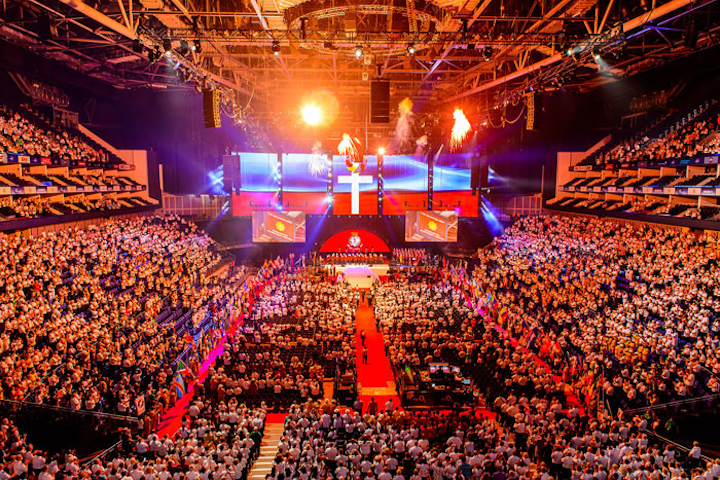 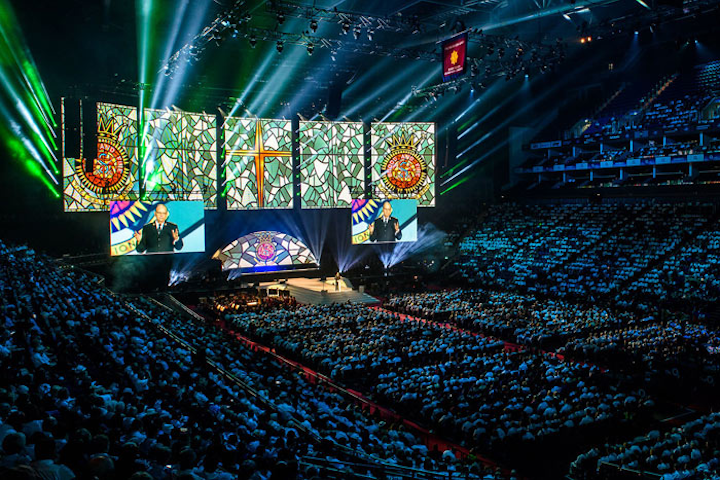 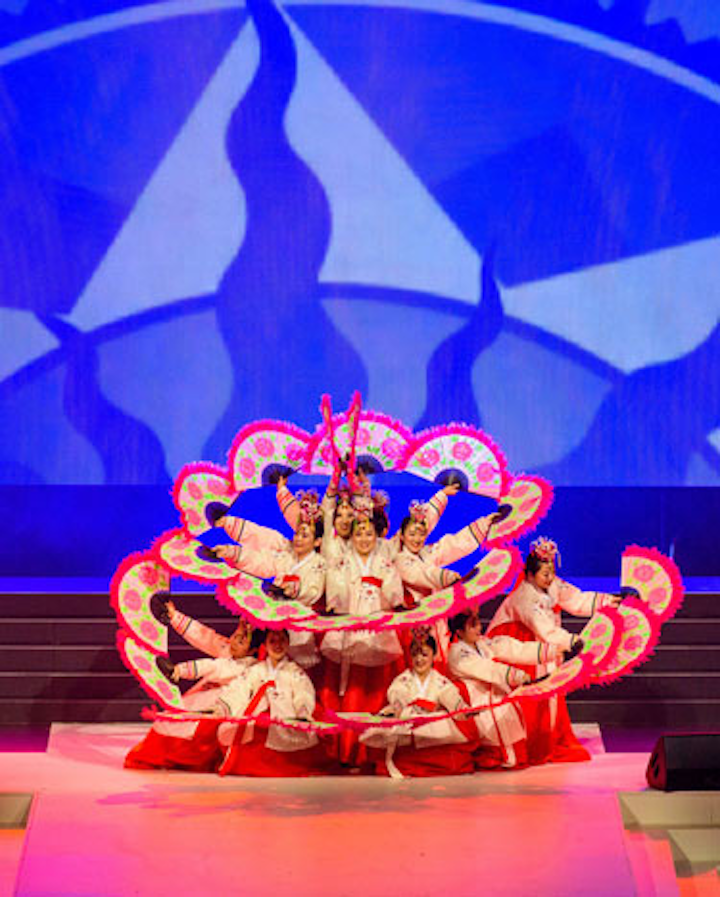 The Salvation Army L.A. Korean Corps performed as part of one of seven programs held in the O2 Arena.
Photo: Graham Carlow 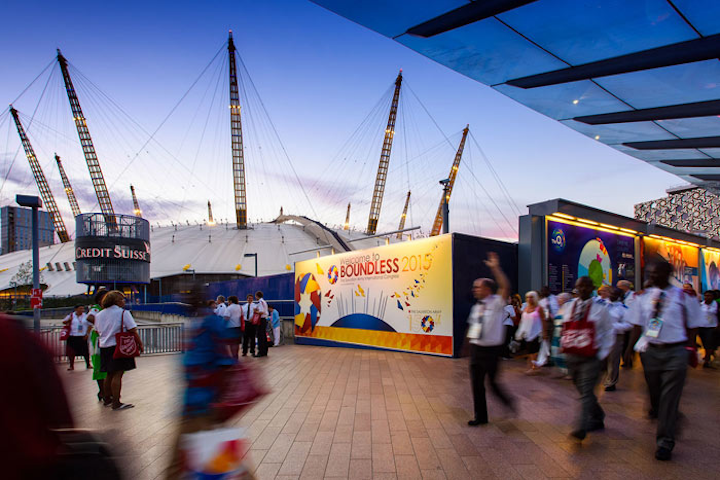 On-theme digital signage and 20 unique wall murals greeted guests as they emerged from the tube station and made their way to the entrance of the O2 Arena.
Photo: Graham Carlow 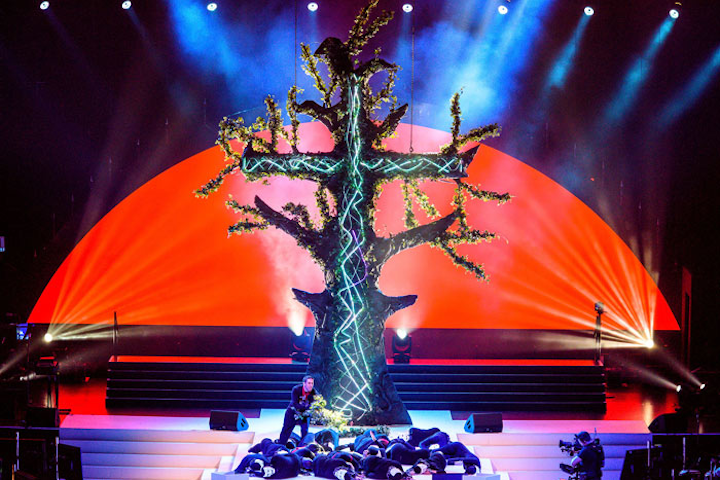