How Google’s New Event Brought Cloud Computing Down to Earth

For a new conference, Google engaged guests by adding playfulness to practical exhibits.

The buzz out of the first Google Cloud Next conference, held at the Moscone Center in San Francisco March 8 to 10, is how Google is emphasizing enterprise opportunities in the cloud. During his keynote address at Next, Google C.E.O. Sundar Pichai said the company is focused on increasing the availability and lowering the cost of data storage and computing, which will make it easier for businesses to understand and act on critical information.

Of course, it’s one thing to tout machine-learning and cloud-based business solutions; it’s an entirely different challenge to bring those concepts to life in an exciting way for more than 10,000 conference attendees. For the latter task, Google’s Events and Experiences team partnered with Sparks, the global brand experience agency, to turn virtual concepts into real-world experiences.

“We develop and execute against a number of large-scale events, but from an overall creative, production, and logistics perspective, [Next] is one of the biggest projects we’ve worked on,” said Dave Lentz, senior vice president for creative strategy at Sparks.

Within the Moscone Center, experiences included a Partner Playground where attendees exchanged ideas and worked on deals, a centralized “Meet the Experts" area, and a Google Cloud Showcase with interactive, educational exhibits designed in the company's brand voice.

“We wanted to make sure that everything we did was purposeful and practical, first and foremost, but very playful,” said Philip McDougall, creative director for Google Events and Experiences. Noting that enterprise spaces tend to be “buttoned-up,” McDougall’s team was determined to bring “Google-iness” to the installations for an interactive environment that was “a little Willie Wonka and a little Dr. Seuss—very hands-on and playful, but very minds-on, too.

The result was a series of about 20 exhibits and games that offered a physical manifestation of virtual ideas like machine learning. Those included an exhibit demonstrating how a cucumber farmer used Google’s TensorFlow deep learning platform to sort cucumbers more efficiently, and a drawing game to prove that computers can be taught to recognize even the worst attempts at art.

From concept to finished product, McDougall said the Google and Sparks teams brought the installations to life in less than two months. “We wrote a story around an attendee. How would we immerse them in this and give them the full picture of Google Cloud’s offering, and at the same time allow them to take away specifics?” he said. “We story-boarded that as a journey and decided from there which elements to bring to life and which products and services we wanted to showcase in the foreground.”

With Google’s story in mind, Sparks handled the physical build and directed the interactive technology with Google Cloud product developers. “That’s one of the things we pride ourselves on,” Lentz said. “The designs of these pieces, the production quality of them, and just how visually arresting they are.”

Other elements of the conference such as breakouts and invite-only summits took place at separate venues, including the InterContinental San Francisco, San Francisco Marriott Marquis, and Bill Graham Civic Auditorium. For those, Sparks handled the fabrication and build-out, while Jack Morton Worldwide and MAS Event & Design handling production and event management.

Google has already committed to hosting the event next year, when it will take place June 4 to 6 in San Francisco. 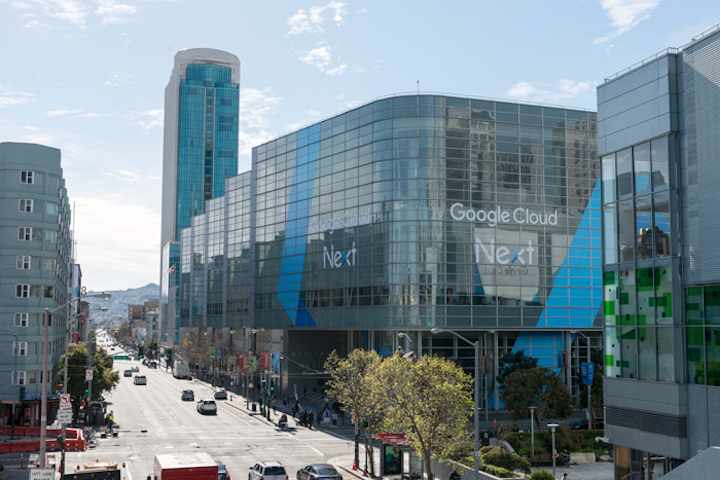 Google Cloud Next, a new event, took place at Moscone West and other nearby venues.
Photo: David J Crewe 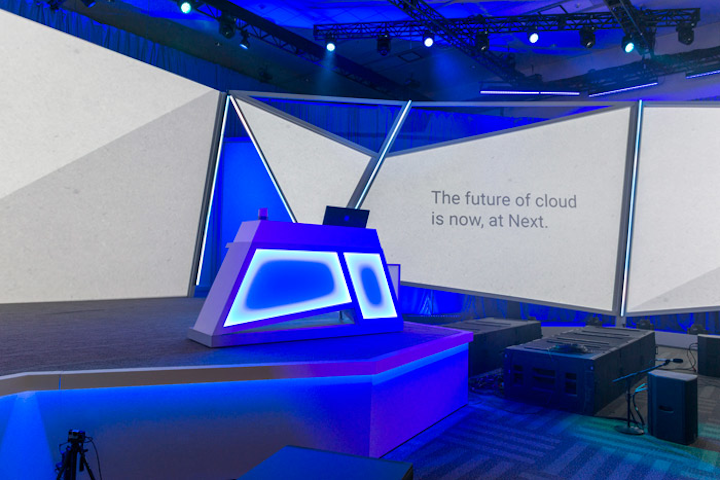 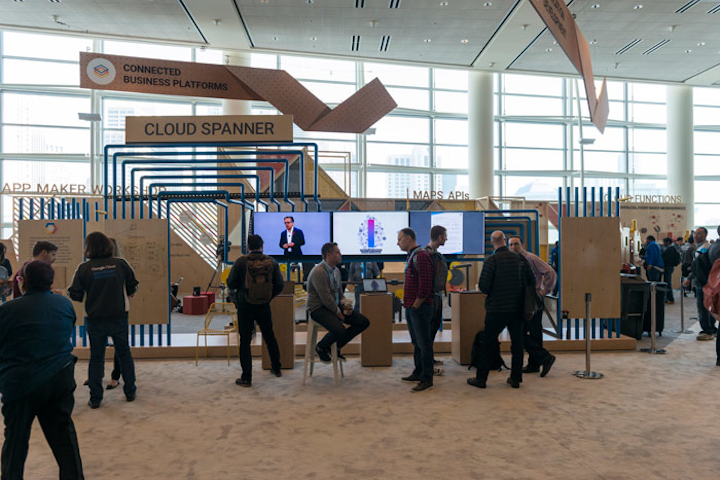 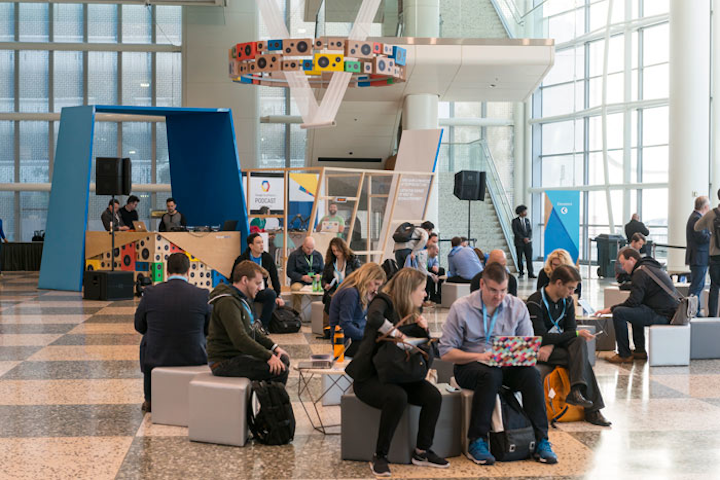 A fabricated DJ booth included images of colorful speakers, and the motif continued with a circular installation hanging above the space. Furniture rentals had an angular look in keeping with the style of the event's branding.
Photo: David J Crewe 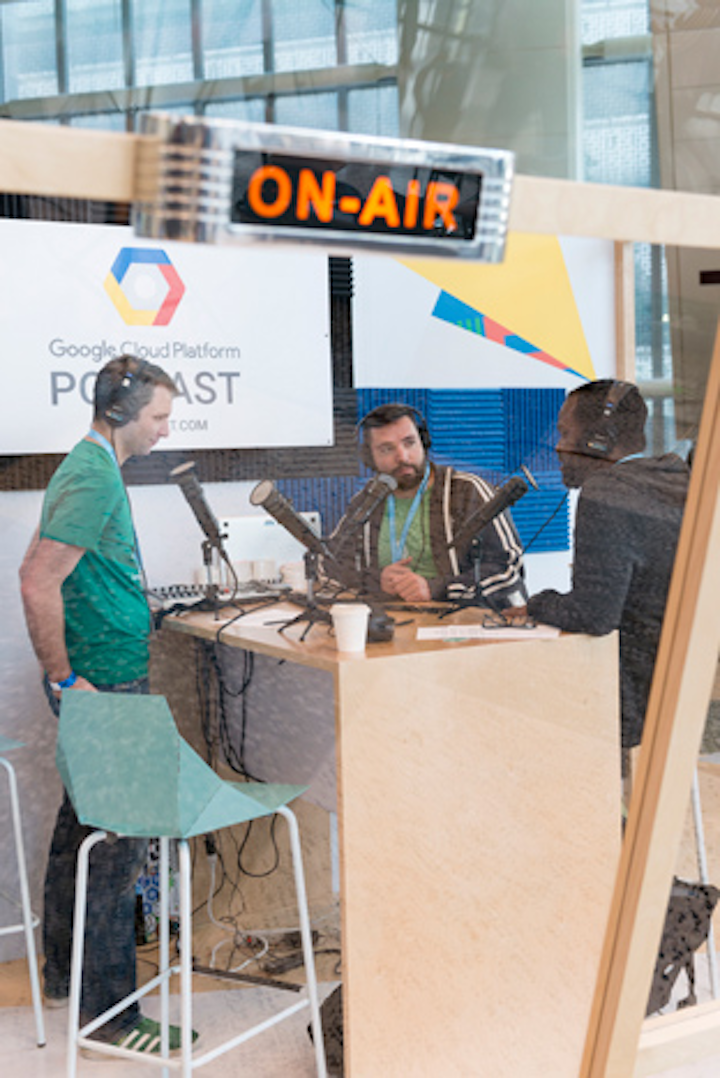 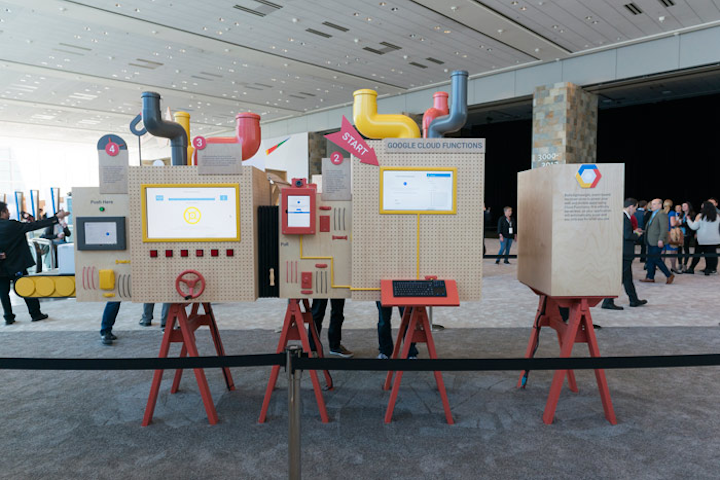 The exhibits were playful but still practical, and all designed in Google's brand voice.
Photo: David J Crewe 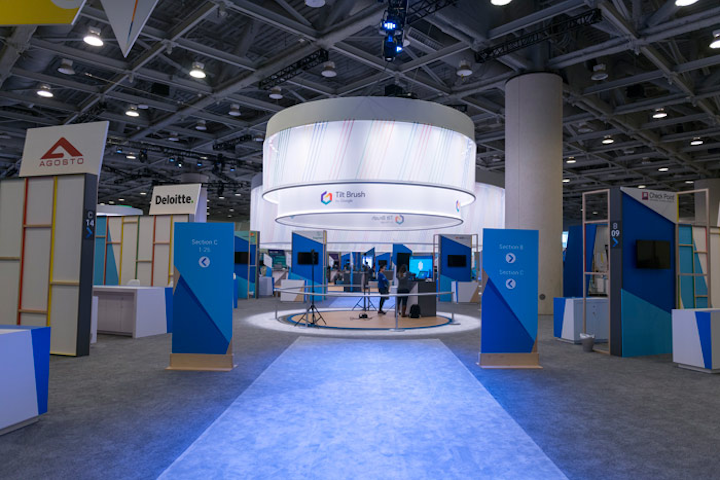