Planners for the symphony’s opening-night gala transformed a traditional arrivals area and dinner tent into a festive after-party space—in less than two hours.

For its opening-night gala every year, the San Francisco Symphony pulls off an impressive logistical feat: Staffers have 90 minutes to transform a traditional, elegant arrivals area and patron’s tent into a nightclub-like after-party space for 2,500 guests.

The 2017 gala was no exception. On September 14, the San Francisco Symphony’s 106th season kicked off with a sold-out event featuring cocktails, four concurrent dinners for patron groups and supporters, a champagne reception, a concert by renowned cellist Yo-Yo Ma, and a massive after-party. The entire affair lasts seven hours—which is only a small piece of the 24-hour push to build and strike the symphony’s fund-raiser.

The day began at 5 a.m., when staffers and city workers shut down Grove Street adjacent to Davies Symphony Hall. For the next twelve hours, they created dining areas, stages, art installations, dance floors, and lounge areas. And by 5 a.m. on Friday, the street had been cleared and reopened to traffic.

It takes more than 500 workers and volunteers to execute an event of this scale, said Jennifer Lobre, assistant director of events for the symphony’s Community Engagement and Volunteer Services Department, who has managed logistics for the gala since it evolved into the massive production it is today.

Planning for the opening night started in January for Lobre and the team at Blueprint Studios, who designed and produced the evening. The event started at 5 p.m. with red carpet arrivals and cocktails before dinner guests split into four groups. About 700 guests flocked to the evening's largest dinner, the patron’s dinner, housed in a 12,000-square-foot tent erected next to the symphony hall. Meanwhile, 40 guests entered the hall itself for the Wattis Room Dinner, and more than 800 guests crossed the street to San Francisco City Hall for the Symphony Supper and the Symphonix Dinner. And at 7 p.m., dinner guests joined an additional 900 concertgoers in the hall for champagne before the performance started at 8 p.m.

That’s when the clock started ticking. Once Yo-Yo Ma’s performance began, workers had 90 minutes to transform the arrivals carpet on Grove Street into an outdoor lounge, and the patron’s dinner tent into a nightclub-style hotspot. Lobre described the scene as “a mad flip.”

By intermission, the dinner chairs and tables had been stacked and removed from the tent, and workers had reset the space with banquettes, chaises, and lounge seating. Outside, workers were setting up heat lamps and bar seating. A rack with fresh flowers was waiting so designers could exchange the centerpieces. Caterers were rolling in food for the late-night revelers, bartenders were preparing their stations, and sound and lighting checks were in full swing.

The opening-night gala wasn’t always such a massive production—in fact, for the symphony’s first 100 years, it was a relatively modest affair. The idea to grow the event originated with Charlotte Schulz—the chief of protocol for the state of the California and the city of San Francisco—and symphony C.E.O. Nancy Bechtle. “When we celebrated our centennial back in 2011, we decided to close Grove Street to house arrivals and do a proper red carpet and after-party. Charlotte, with all of her wonderful relationships, was able to make that happen,” Lobre explained.

During this year's after-party, guests danced to music from Wonder Bread 5 and DJL, got in line for complimentary late-night bites from one of 20 restaurant stations, and posed for pictures in front of mirrored installations that were custom-built for the evening.

To plan the event, after-party co-chairs Annie Dreshfield, Cate McDonough, and Sharon Seto began contacting local vendors and businesses almost six months ago. “Throwing a party for almost 3,000 people is not an easy task,” Dreshfield said. “The [Symphony] staff and Blueprint really do a good job making that turnaround and making our vision come to life.”

When the party ended at midnight, crews had less than five hours to strike everything on Grove Street—including furnishings, staging, lighting, sound, catering, and restaurants—before the street sweeper arrived at 4:30 a.m. Tent removal was more forgiving: “We have three full days to strike and take down all of the tenting,” Lobre noted. “It takes two weeks to go in, and three days to come out.”

For Lobre, who had been onsite since 5 a.m. to manage logistics, the end of the party signaled the changing of the guard to the late-night load-out crew. “After midnight, I think I’m seeing double. Adrenaline will take you very far, but at a certain point, your body just crashes,” she said.

Opening night may be an exhausting production for the organizers, but it’s also an endeavor they enjoy. “I love seeing everybody we play and work with throughout the year. This is our crown jewel of the season, and it brings everybody together,” Lobre said. “That energy becomes infectious and very inspiring for the rest of the season.”

Proceeds from the opening-night gala benefit the symphony’s artistic, education, and community programs. 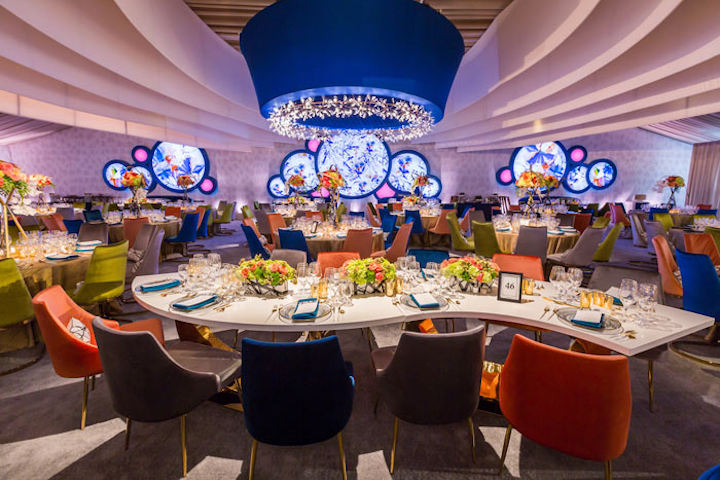 After cocktails, the event’s 2,500 attendees split off to four concurrent dinners. The largest dinner was the colorful, elegant patron’s dinner, which was housed in a 12,000-square-foot tent erected next to Davies Symphony Hall. The Blueprint Studios-designed space was inspired by modern chinoiserie art and fashion. Overhead was an intricate ceiling chandelier that was designed for the event. 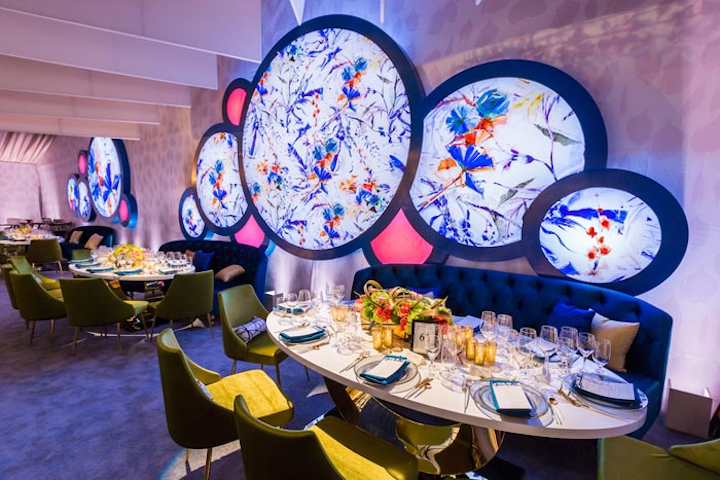 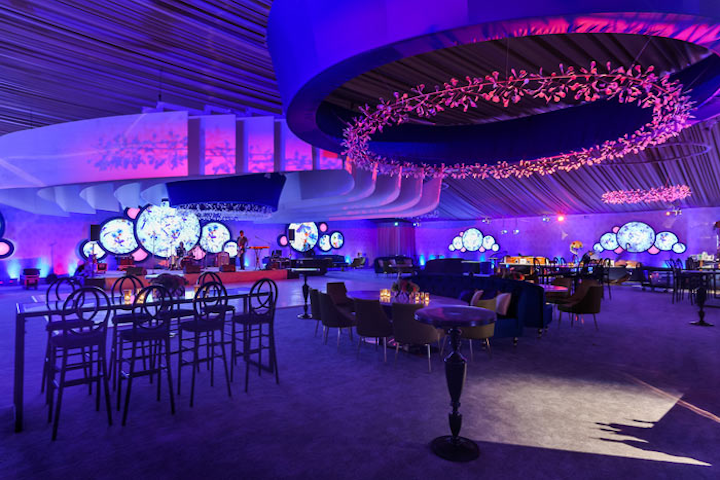 Once the patron’s dinner ended and guests went inside the symphony hall for the performance, organizers had 90 minutes to remove the dining tables and chairs, and load in banquettes, chaises, and lounge seating.

While the concert didn’t technically end up 10 p.m., organizers needed to get the spaces party-ready by 9:30. “We of course want people to stay for the end of the concert, but we know that there are some people who come more for the overall experience, and they want to make sure they get their lounge seating or are first in line at the bar,” Lobre explained. 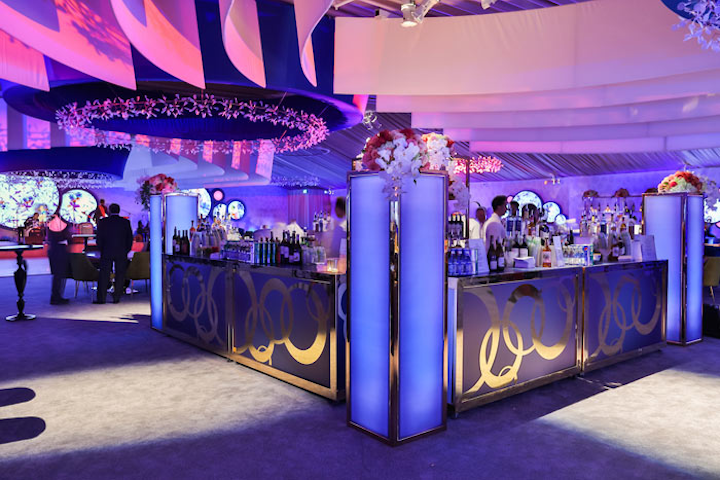 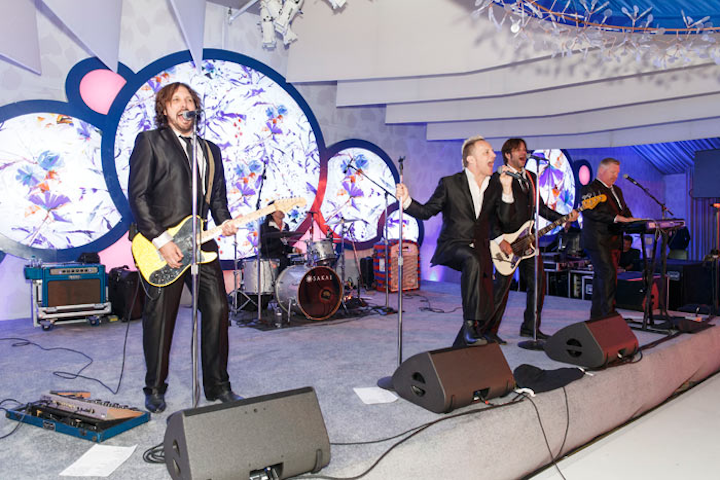 Inside the tent, guests danced to Top 40 hits by the band Wonder Bread 5. 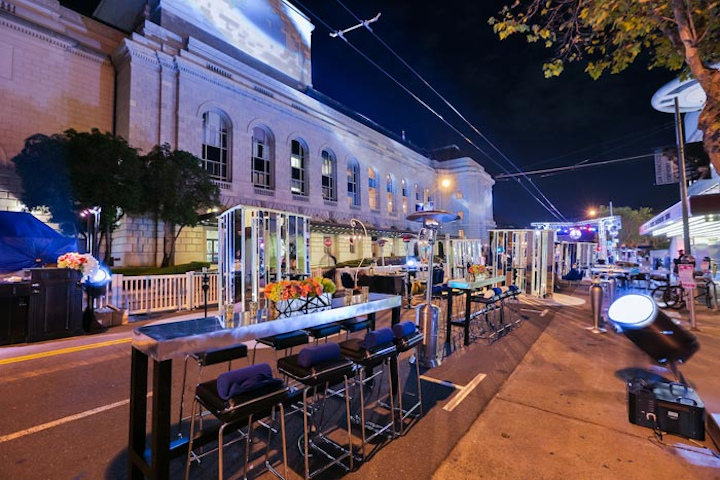 During the 90-minute window, workers—including more than 100 staffers from Blueprint alone—also transformed the outdoor area that had previously held the red carpet. Heat lamps and bar seating were set up, and centerpieces were exchanged. Lounge seating featured blue velvet chairs and gold details, and organizers provided blankets to keep guests warm. 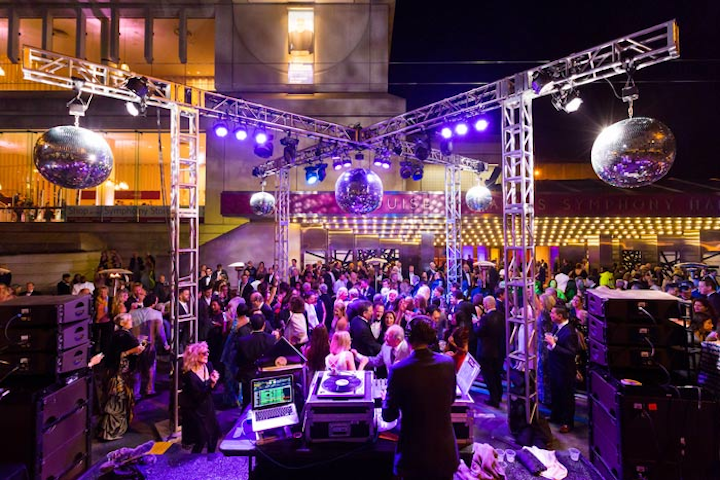 The outdoor after-party featured a performance by DJL. Disco balls overhead added to the late-night vibe. 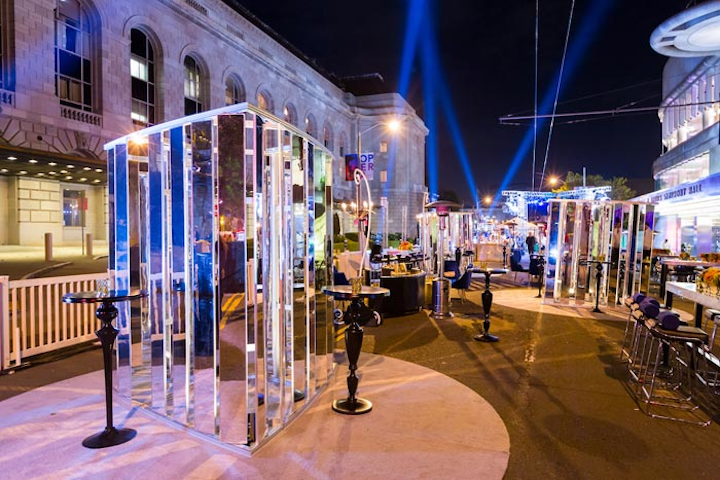 Additional lounge seating featured mirrored installations by Blueprint, which proved to be a popular spot for photo ops. 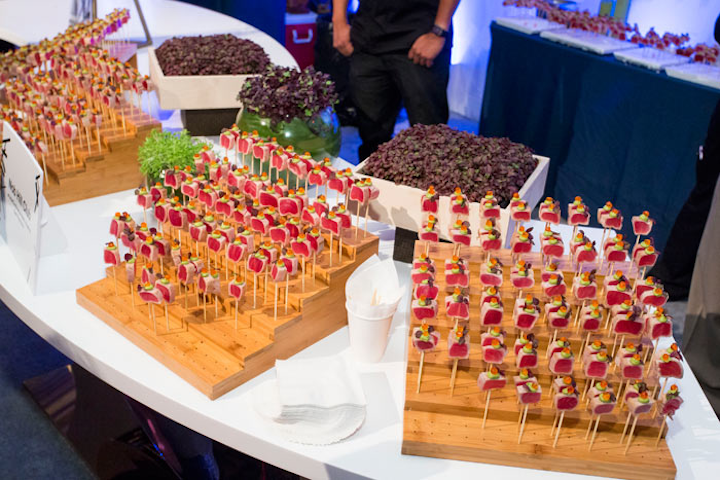 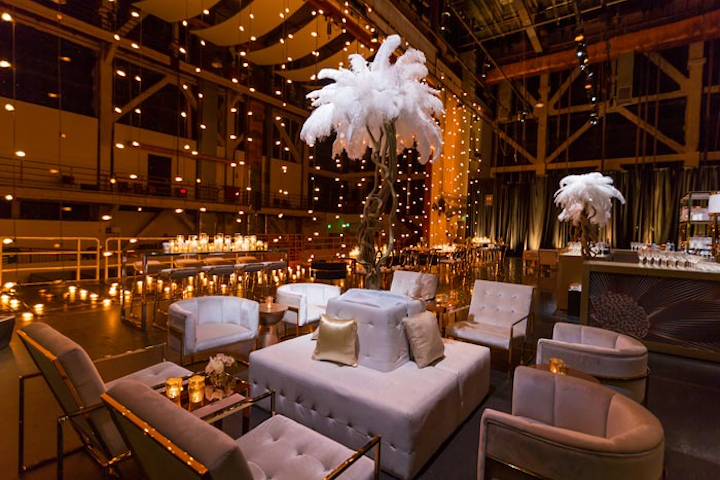