See How St-Germain Brought a Floating Meadow to Brooklyn

For its latest summer fete, the French liqueur brand tapped the Gathery and other vendors to create a striking flower-filled meadow that was suspended from the ceiling of a Brooklyn warehouse. 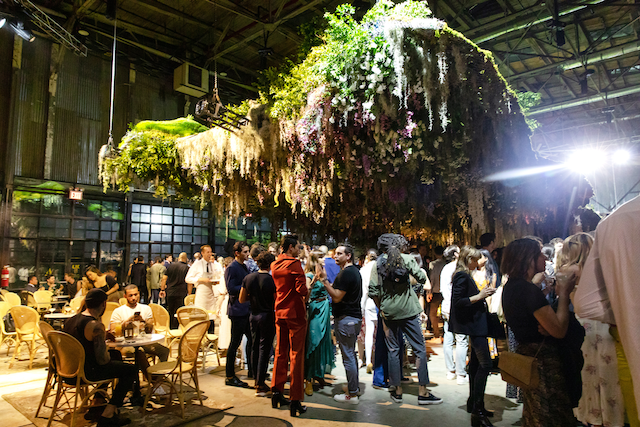 The V.I.P. kickoff event took place June 20. Guests mingled and sipped cocktails under the rear of the structure, where they could view FlowerCult's floral installation.Photo: Benjamin Lozovsky

NEW YORK—St-Germain is known for delivering a whimsical garden fantasy at its events. To kick off summer, the French liqueur elevated its usual aesthetic—literally—by unveiling a floating elderflower meadow.

For the third annual Maison St-Germain in New York, the brand’s summer solstice celebration, St-Germain debuted the meadow at Greenpoint Terminal Warehouse in Brooklyn. The installation was revealed at a V.I.P. event on June 20, and was then open to the public from June 21 to 23, a first for the brand’s normally exclusive fete.

The 12-ton meadow spanned 1,200 square feet, nearly the entire length of the warehouse, and featured 1,000 elderflowers, highlighting St-Germain’s tagline of having 1,000 elderflower blossoms in every bottle. The suspended installation cascaded upward and also featured a colorful floral installation, recalling the look of the previous two editions of the event.

To execute the project, St-Germain partnered with Williamsburg-based exterior design and landscaping firm ManscapersNY, which conceptualized the idea, and experiential design company the Gathery, which helmed production and design. ManscapersNY co-founders Garrett Magee, James DeSantis, and Mel Brasier are also the stars of Bravo’s Backyard Envy. Additional partners included Bednark Studio, which handled the build and engineering, and Ellen Robin Rosenberg and her team at FlowerCult, who created the elaborate floral installation.

Gathery co-founder Nicky Balestrieri, the installation’s principal designer, said the goal was to engage St-Germain’s bon vivant audience, create an installation that people had to see to believe, and create something beautiful in an unexpected place.

“This sculptural interpretation of ‘1000 elderflowers in every bottle’ was a sensorial, real-life brand story,” said Balestrieri. “Captured at the height of their beauty, this botanical fantasy was not so ephemeral this time—it remained open to the public for days after our annual event, to an audience broader than just cool, young creators.”

The past two editions of the event were held in Manhattan, so this year, St-Germain brought the event to Brooklyn and, more specifically, an industrial setting where flowers normally don’t grow.

“The real driving force for Greenpoint Terminal Warehouse was that the Gathery wanted to take the meadow into the direction of an art installation,” said Balestrieri. “It needed a gallery-like space with high weekend foot traffic. The idea to float the installation further required a space that could rig such a heavy installation in a protected environment.”

Balestrieri said the installation took two and a half days to install. Fabrication partner Bednark Studio installed the base rigging structure, which consisted of a 20- by 60-foot gridded structure, along with attached cheeseborough pipe, bent steel, and a net of chain link fence. Then, ManscapersNY created the upper tier, which featured the actual elderflower meadow.

After the structure was suspended in the air, Ellen Rosenburg and her team at FlowerCult created the floral installation with blooms such as pink delphinium, light yellow achillea, amnesia rose, and lavender. The structure was then elevated in the rear, allowing guests to observe the meadow, but also discover the floral “underbelly.”

The installation also had special meaning for the Gathery co-founders. Balestrieri said the design idea came to him when he was separated, literally, by time and space; the New York-based designer had recently been in Los Angeles working for an extended period of time. For him, the installation alluded to a space in between time and space, where he felt he and his lover could meet and find common ground, when it felt like they were living in “two alternative planes of existence.” And co-founder Luigi Tadini nicknamed the installation "Gloria," which became the installation’s go-to term.

The meadow was the centerpiece of the event, but wasn’t the only experience for guests. A day before the V.I.P. event, the Gathery created flower graffiti “growths” nearby that served as a mysterious physical path to the venue. After entering the venue through an unmarked, French-inspired door, guests walked through a floral hallway, which led to the main experience.

After observing the meadow, guests could drink St-Germain cocktails from pop-up bars in the venue and also enjoy French bistro-inspired food and a pour-over cocktail station from Pinch Food Design. Following the installation's run, all of the flowers and portions of the remaining meadow were donated to Green Thumb, a nonprofit that supports community gardens.

See how the idea of a floating elderflower meadow became a reality below. 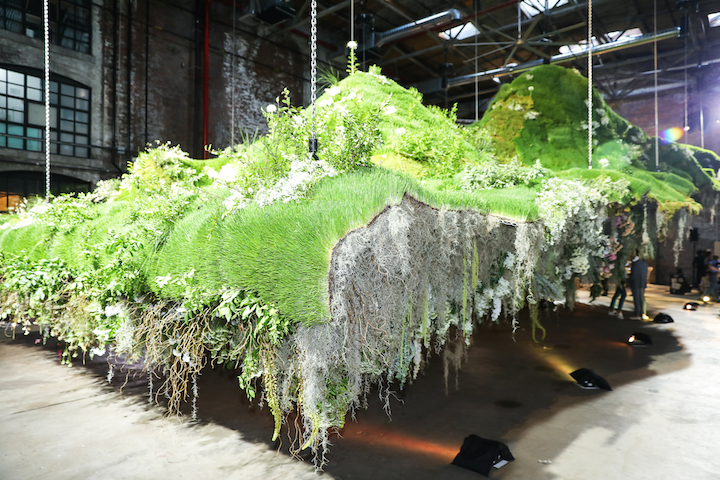 The installation for the 12-ton meadow began more than two days prior to the V.I.P. event. The base rigging structure, installed by Bednark Studio, consisted of a 20- by 60-foot gridded structure, along with attached cheeseborough pipe, bent steel, and a net of chain link fence. Wheatgrass for the meadow was provided by Perfect Foods.
Photo: Sansho Scott/BFA.com 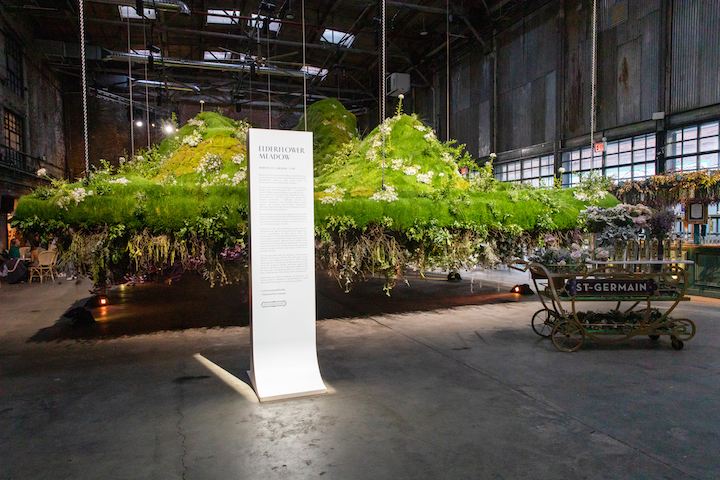 At the entrance, a sign described the inspiration for the meadow and how it came together. The front of the venue also offered cocktails from a branded bar cart.
Photo: Benjamin Lozovsky 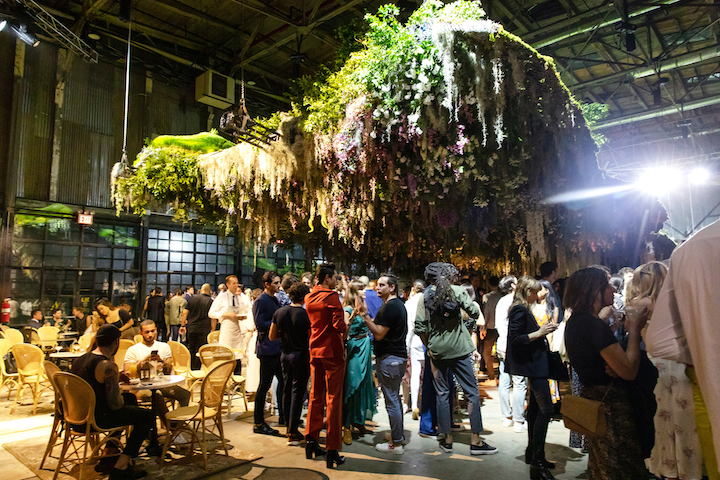 The V.I.P. kickoff event took place June 20. Guests mingled and sipped cocktails under the rear of the structure, where they could view FlowerCult's floral installation.
Photo: Benjamin Lozovsky 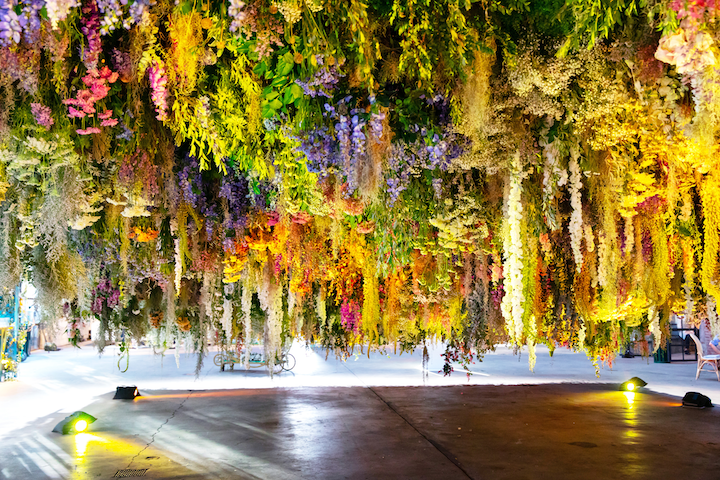 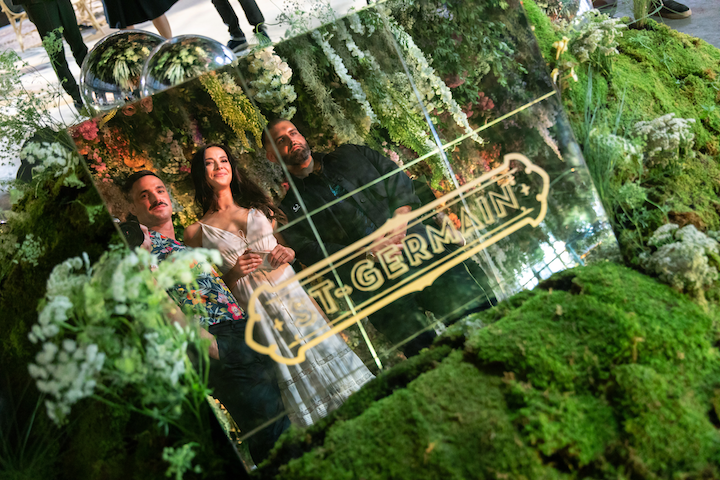 The floor of the venue featured a mirror so guests could see their reflection with the meadow above. ManscapersNY founders Garrett Magee, Mel Brasier, and James DeSantis posed for a photo.
Photo: Benjamin Lozovsky
More in Event Production & Fabrication