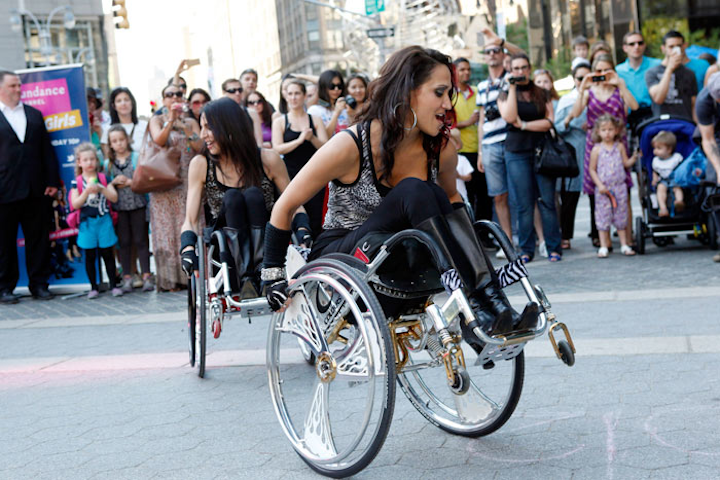 On Thursday, May 31, two of the four stars from the Sundance Channel's new series Push Girls performed at three different locations in New York. The pop-up promotions were accompanied by a DJ booth and signage as well as branding displays in the wheelchairs of the performers.
Photo: Stuart Ramson/Insider Images for Sundance Channel

As a way to get its new show Push Girls in front of the public before its June 4 premiere date, the Sundance Channel organized three pop-up events on May 31 that put hip-hop dancers together with a local wheelchair dance troupe. The series is about four women who either by accident or disease are disabled and use wheelchairs, and the television network worked with experiential agency the Michael Alan Group to set up stops in Times Square, the Flatiron district, and Merchant’s Gate in Central Park near Columbus Circle.

"What’s interesting is we’ve got these four amazing girls in the show Push Girls, and we were really inspired by them and who they are," said Sundance’s senior vice president of marketing, Monica Bloom, who conceived the public-facing stunt. "Our positioning is all around the fact that they are four fierce, fearless women whose real main goal is to shatter expectations around what life in a wheelchair is. The thought was, ‘How best to celebrate who these girls are, their attitude, and how they embrace life?’ By bringing that together with some other wheelchair dancers to really bring it to the streets and tap into the existing street culture of New York.”

However, Bloom asserted the initiative was not designed as a flash mob: “The term 'flash mob' conjures up this idea of bringing different people together in a coordinated effort. We’re not doing that at all. It’s a very organic, quick, in-and-out, specific performance.”

What transpired was a five-minute routine that first involved two of the four Push Girls, Auti Angel and Mia Schaikewitz, and later saw the duo joined by wheelchair dance group American DanceWheels and able-bodied break-dancers. Angel's husband, DJ Stretch Boogie, provided the tunes, spinning tracks from a booth on wheels that was accompanied by a pair of truss towers equipped with LED lighting.