Why Ferrari Took Over a Gas Station

Ferrari continued to dominate the auctions surrounding this year’s Pebble Beach Concours d’Elegance—a 1964 250LM sold for $17.6 million and a 2005 Enzo that once belonged to Pope John Paul II commanded $6.05 million. But the legendary Italian automaker took a decidedly off-the-beaten-track approach when it came to hosting its V.I.P. clients and journalists—by renting out a gas station.

Being Ferrari, the gas station was no run-of-the-mill setup. Dubbed Casa Ferrari Carmel, the pop-up reinforced the luxury automaker’s presence on the peninsula as it hosted, over the course of four days, more than 750 vintage classic and modern Ferraris and some 3,500 guests. The site itself was a Shell station at the Carmel Highlands General Store, a vintage location just south of Monterey that has been a north coast landmark for half a century.

“This whole event weekend was becoming a ‘showroom on a green,’ and that to me was a turnoff,” said Greg Adams, Ferrari North America’s director of marketing and brand experience, alluding to other luxury brands that hosted guests at comparatively cookie-cutter villas and estates either on the water or up in the hills. “I think more and more people, inclusive of some of the venues themselves and how they conduct their events, will need to be moving to a more integrated experience where you remember the values of why said event was such a success.”

To bring Casa Ferrari to fruition, Adams tapped his longtime production partner, the New Jersey-based company Dimensional Communications that handles all the builds for Ferrari’s presence at auto shows and events. Toronto-based GMR Marketing, which works on the Ferrari Challenge races, oversaw the running of the activation and personnel management.

“The goal was to make the activation more physical versus virtual in this day and age of digital experiences, particularly with Ferrari, which is all about getting behind the wheel, getting the sensation, the smell, the feel,” Adams added. “The experience is much more important.”

As it turned out, the gas station owner was, himself, a Ferrari owner. And after some back and forth, the pop-up plans, which were initially shelved as the company underwent some executive restructuring and set its sights on a 60th anniversary celebration that took place in Los Angeles last year, were able to be refined during the postponement.

The resulting Casa Ferrari, which ran from August 12 to 16, was instantly recognizable with its white façade and freshly painted, vivid red window shutters, inspired by the legendary Enzo Ferrari’s home base beside the Fiorano racetrack in Maranello. Ferrari, in partnership with Shell, dressed the General Store’s public gift shop to look like an Italian villa and installed a garden area where real Italians served authentic Italian treats such as pasta, Parmesan cheese, espresso, and gelato. Naturally, the brand also used the occasion to make the North American driving debut of its new twin-turbo V8 sportscar, the 488 GTB.

Not only was Ferrari one of the 2015 Pebble Beach Concours d’Elegance featured marques, but it was also still riding the wave of success from last year’s Monterey Car Week, when a 1962 Ferrari 250 GTO set the record for the highest price ever paid for a car auction and a 1954 375 MM Scaglietti Coupé won best in show.

With the opening of the pop-up, Adams pulled back on other activations Ferrari would otherwise have been part of, allowing the budget for this year’s Pebble Beach efforts to remain the same from that of 2014. For example, Ferrari didn’t have a corporate presence at vintage auto show the Quail as the brand opted instead to focus on the Casa Ferrari experience. “We asked ourselves, ‘How can we make it more an event where the attention is drawn to Ferrari and not be another participant?’” said Adams. “To make it an experience, we had to, for budget reasons as well, give up on some of the multitude of display events we normally participate in and bring it all together in one area which was Casa Ferrari.” Adams took those four or five different display events and essentially consolidated them into one location, ”which meant we had Ferrari staff there, agency support there, and dealers there … so it all added to the overall experience of being arm's-length distance from Ferrari people.”

Between the public and private areas, around 3,500 people visited Casa Ferrari, representing a 30 percent increase over initial estimates, said Adams. Ironically, because the gas station remained a public space, any driver in any vehicle could, technically, pull up to buy gas (and a handful did).

In terms of challenges, Adams noted there were two major potential issues: parking and traffic flow and client flow management. “This is where we worked closely with the owner and the County of Monterey,” said Adams. “Once they saw how simple the plan would be, the permitting went through smoothly.” The traffic, despite the gas station being housed in a rare wide swath of road, also posed an issue, so the California Highway Patrol was stationed alongside the road. The fire department directly behind Casa Ferrari also cooperated, allowing production teams to set up on a portion of its space. “The city and county really came through for us, and I think in the end they were pleased that they could do something like that and mitigate any potential problems,” said Adams.

By opening the pop-up early, Ferrari was also able to accommodate and host its upper echelon V.I.P. clients in a more intimate way before the public descended on Monterey. “It was one-plus-one-equals-three all the way through,” said Adams. As for return on investment, Adams waved aside any notion of sales. “In the end, we do it to maintain or raise the level of customer satisfaction for our clients.” And Adams said it’s a possibility that Casa Ferrari will return next year.

“There's always the notion that whatever we do, we want to improve upon,” said Adams. “We don't want to look back so much as we want to take something and make sure the next iteration is somewhat better, so that's the challenge to us.” 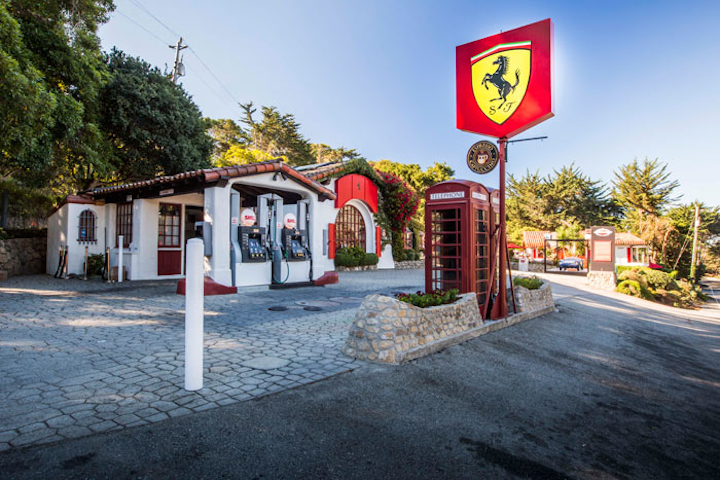 Debuting during Monterey Car Week and culminating with the Pebble Beach Concours d'Elegance was the Casa Ferrari Carmel, located on iconic Route 1 in Carmel Highlands. The four-day pop-up, open to clients and fans alike, featured a complete branding takeover of the Carmel Highlands General Store and adjacent art gallery. In total, nearly 3,500 visitors made the pilgrimage to Casa Ferrari, representing 30 percent more in attendance than had been initially estimated.
Photo: Courtesy of Ferrari North America 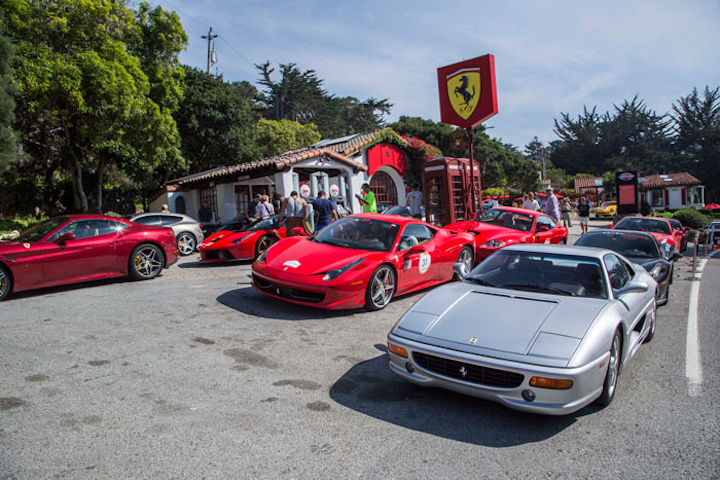 Dozens of Ferraris, both vintage and modern, congregated at Casa Ferrari during the four-day pop-up. Ferraristi could pull into the Pit Stop area and get refueled, receive a quick detailing of their vehicle by Meguiar's, or simply stop in for an espresso courtesy Filicori Zecchini and bite of Italian fare.
Photo: Courtesy of Ferrari North America 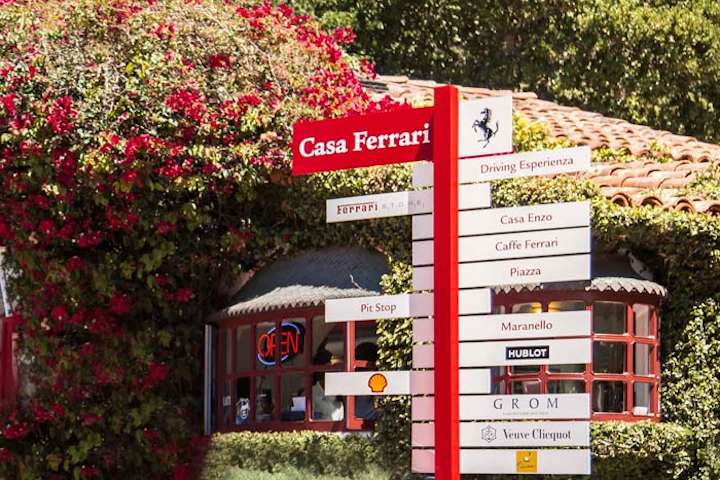 Custom signage erected at the entrance to the gas station directed guests to either the public areas on the left or the by-invitation-only sections to the right. The verbiage was a riff on Ferrari's Maranello, Italy, headquarters that also indicated its partner vendors for the pop-up. "The most important element about Casa Ferrari was that it have a public area," said Adams. "The public space balanced the private space and it was important to give as much a Ferrari experience to the motor heads as possible."
Photo: Courtesy of Ferrari North America 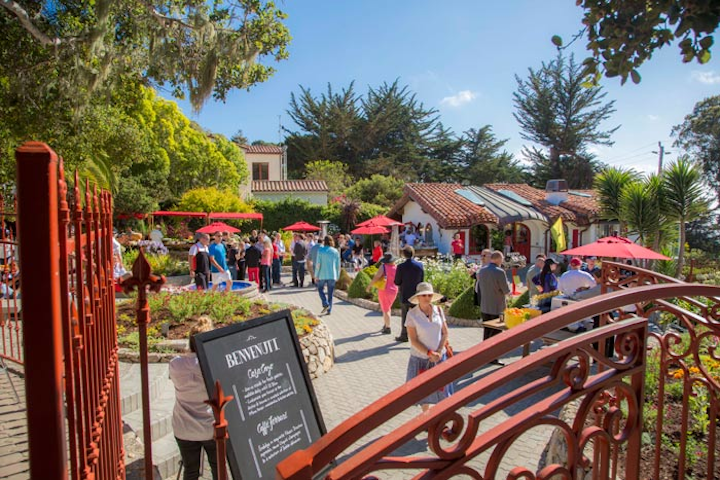 To emulate founder Enzo Ferrari's Mediterranean-style home on the legendary Fiorano racetrack in Italy, all the gates and window shutters on site were painted a classic shade of Ferrari red by a local Carmel painter at the behest of the gas station owner. Greg Adams, director of marketing and brand experience at Ferrari North America, oversaw the project alongside longtime production company partner Dimensional Communications, which began on-site work about one month prior to its August 12 opening.
Photo: Courtesy of Ferrari North America 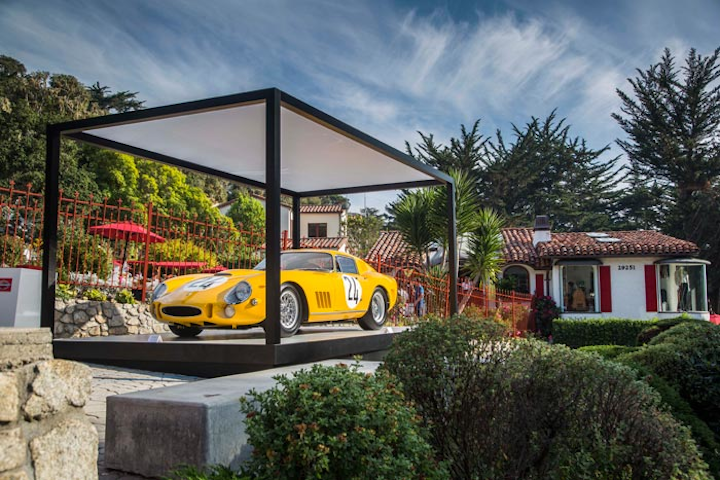 Among the amenities open to the public at Casa Ferrari was the Piazza, a custom-built structure that displayed a rotating schedule of vintage—and priceless—Ferraris certified by Ferrari Classiche each day. These included a 1954 250 Monza (one of four ever built) and a 275 GTB Competizione (pictured), which captured third overall in the 1965 24 Hours of Le Mans.
Photo: Courtesy of Ferrari North America 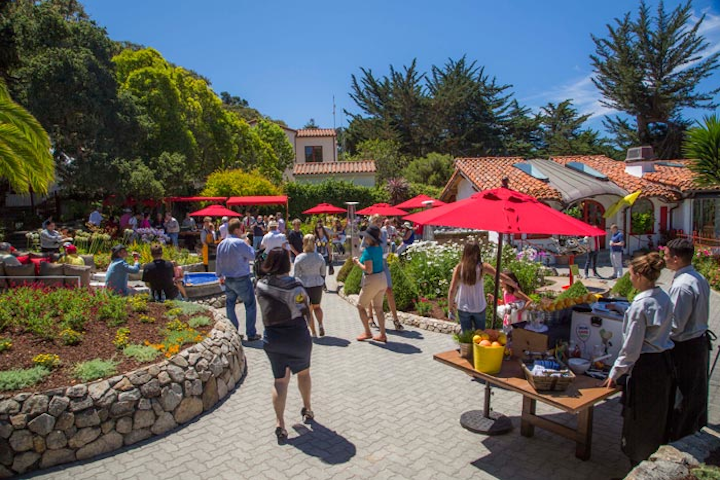 The private portion of Casa Ferrari featured a full takeover of an existing art gallery space, which the auto brand relandscaped and decorated with red awnings and umbrella stands to reinforce its iconic color. Invited guests were at liberty to enjoy all the trappings at no cost.
Photo: Courtesy of Ferrari North America 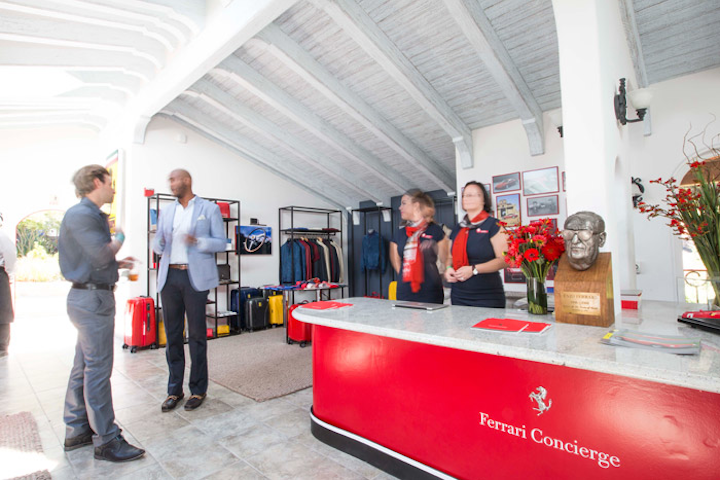 Within the private quarters was a Ferrari concierge service, on hand to assist existing clients with any special needs as well as explain the benefits of Ferrari ownership to enthusiasts and prospective clients.
Photo: Courtesy of Ferrari North America 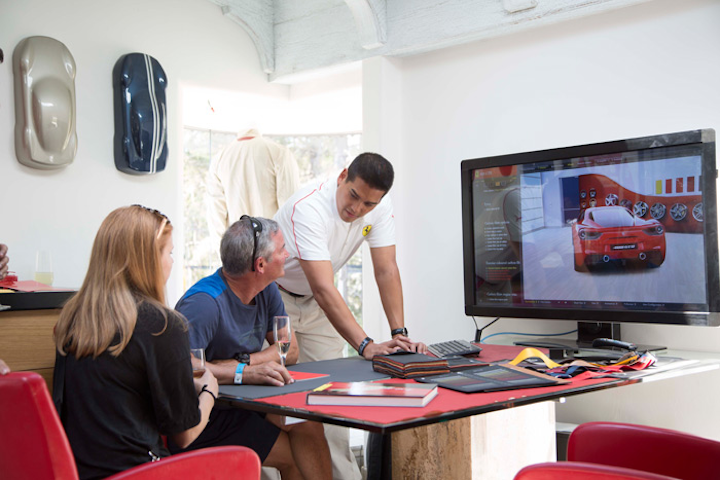 Further into the private part of Casa Ferrari was a custom workstation that allowed clients—both current and potential—to work with a Ferrari specialist to custom design their dream Ferrari. Everything from Ferrari paint samples to swaths of interior leathers were available for perusal. "It's a relatively small space, so we had to be efficient," noted Adams. "We went back and forth on the details, and all the furniture and props were existing—the majority of which came directly from the offices of Ferrari North America."
Photo: Courtesy of Ferrari North America 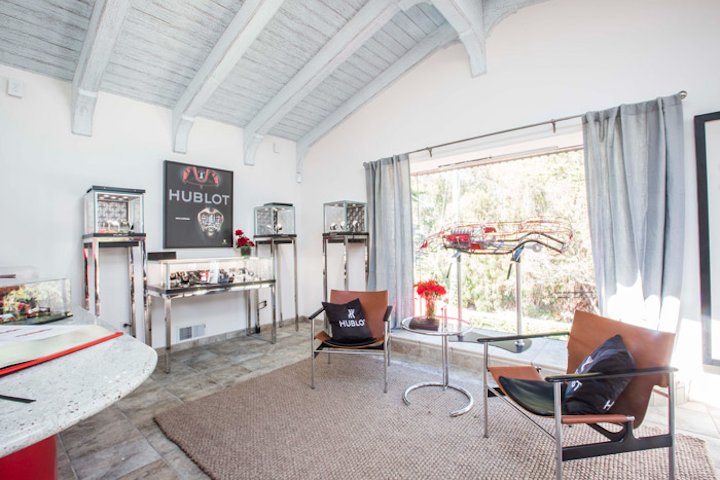 Hublot, the official watch partner of Ferrari, erected a vignette of about a half dozen timepieces for guests to try on and peruse. An Hublot representative manned the salon and was available to facilitate on-site sales or direct prospective clients to the brand's newly opened San Francisco boutique.
Photo: Courtesy of Ferrari North America 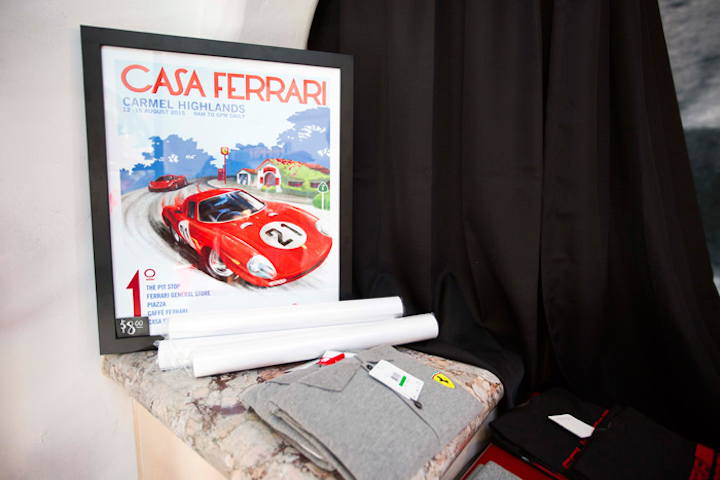 From posters to six-figure Hublot timepieces to the debut of Ferrari's upscale Prima line of furnishings, Casa Ferrari offered a vast array of merchandise for the die-hard motor head. A special poster commemorating Casa Ferrari was particularly popular with those seeking a keepsake from the memorable pop-up.
Photo: Courtesy of Ferrari North America 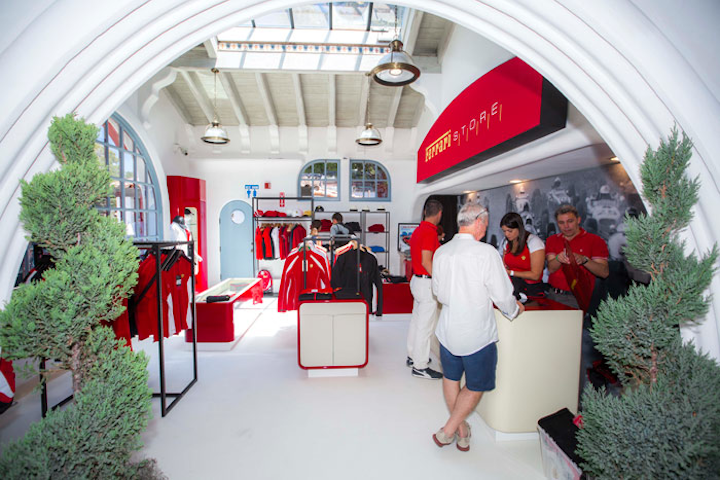 Tucked in what was the gas station's general store was a Ferrari shop open to the public. Fans could purchase their favorite Ferrari mementos while ogling the exotic cars parked mere steps away.
Photo: Courtesy of Ferrari North America 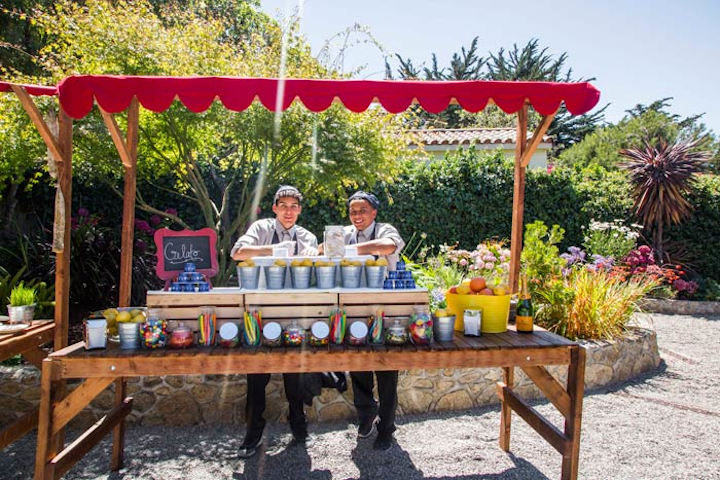 Those with a sweet tooth or simply seeking a cold dessert were invited to help themselves to the Grom gelato stand. Casa Ferrari served everything from Champagne and espresso to a full lunch and dessert for invited guests.
Photo: Courtesy of Ferrari North America 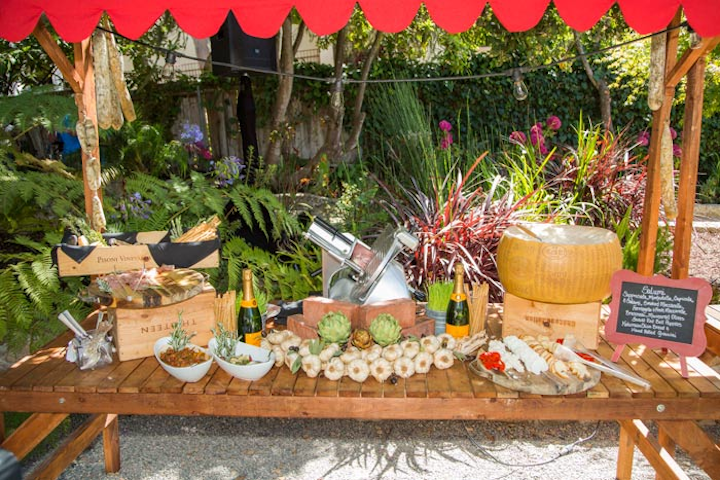 In addition to a Veuve Clicquot Champagne bar, invited guests were also treated to a proper Italian feast featuring a bevy of pastas and meats, not to mention a traditional Parmesan cheese wheel.
Photo: Courtesy of Ferrari North America 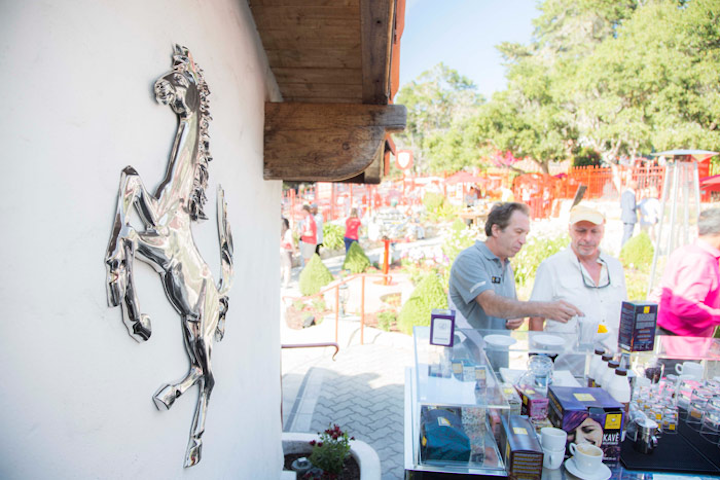 The automaker sought to insert some additional branding elements while covering up the general store's existing signage. To wit, Ferrari's iconic cavallino "prancing horse" insignia was placed on one wall.
Photo: Courtesy of Ferrari North America 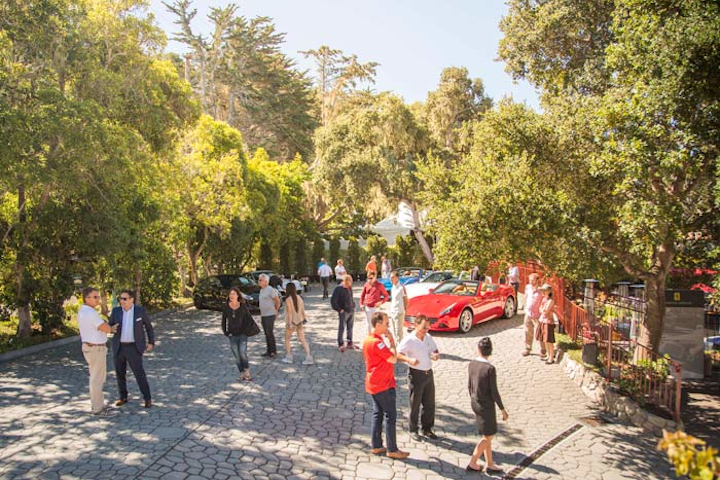 Directly behind Casa Ferrari was a garage area for Ferrari's corporate fleet, vehicles that belonged to Ferrari executives. The space was also the staging area from which select clients and media could take certain Ferraris out for test drives.
Photo: Courtesy of Ferrari North America
More in Experiential, Activations & Sponsorships