What Was New at This Year's PopSugar Play/Ground?

The female-focused lifestyle festival made some updates in its second year while still remaining on brand. 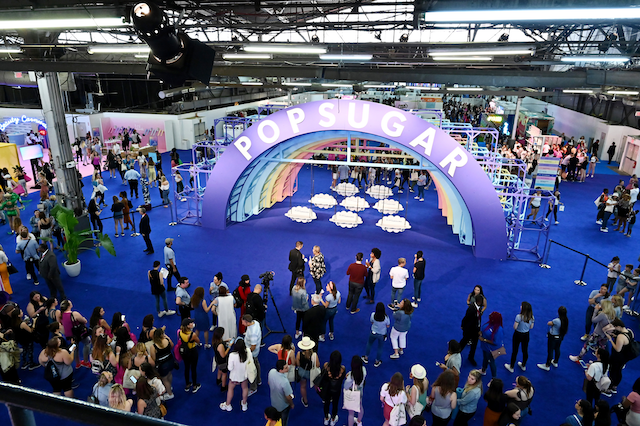 This year’s experience featured a more specific theme: “Powering Your Happily Ever After,” which, Plaks said, was about “respecting and celebrating every woman's journey no matter what that is.”Photo: Astrid Stawiarz/Getty Images for PopSugar and Reed ExhibitionsNEW YORK—Lifestyle brand PopSugar returned to Pier 94 in New York on June 22 and 23 to host its second annual PopSugar Play/Ground, an experiential festival designed for women.

Anna Plaks, senior vice president of creative development and innovation at PopSugar, explained that although “year one was definitely successful, we also learned a lot.” Incorporating feedback from both attendees and brand partners, the second iteration boasted several new and improved aspects, including a dedicated fitness area called Sugar Studios. Last year, the on-site fitness classes were mixed in among other programming on a smaller stage. This year, back-to-back workouts hosted by fitness influencers and popular studio instructors were held in a new fitness dome.

Also for 2019, PopSugar Play/Ground, which was produced in conjunction with Reed Exhibitions, featured a more organized floor layout that was divided into “villages,” including the Samsung Soul Space Village, a wellness space with programming on spirituality, stress relief, crystal healing, and more. Plaks explained that Samsung’s festival sponsorship was a “natural extension” of an already existing relationship between the media company and the tech brand; Samsung currently sponsors a platform on the PopSugar site called the Well that centers around wellness topics such as sleep and stress management.

Plaks explained that she and the PopSugar team collaborate with sponsors on their activations, from concept to execution. We are “hands on with every brand involved with Play/Ground because it’s such a reflection of our brand. We want to make sure that anyone participating in it is adding value back to the attendee.” She added that the activations need to be on-brand and playful, while also offering inspiration and learning moments.

“Every sponsor wanted to have an interactive connection with the audience. They knew it was a really dynamic event. They knew that PopSugar as a whole stands for playfulness and for learning and inspiration…. We always wanted to make sure that we were giving value back to the attendee, whether it was shopping related and showcasing their product in an exclusive, interactive way or whether it was through programming.”

Last year’s inaugural event was a kind of coming-out party for the festival with an overall design that focused on the brand itself. This year’s experience, which was designed with creative partner the Gathery, featured a more specific theme: “Powering Your Happily Ever After,” which, Plaks said, was about “respecting and celebrating every woman's journey no matter what that is."

Playing into that fairy tale-like idea, a giant rainbow swing set served as the Instagram-worthy centerpiece, welcoming attendees at the entrance. Plaks said that organizers wanted to take this “traditional interpretation of that ‘happily ever after’... and modernize it, make it feminine, make it cool.” The design symbol could be found throughout the event, often in deconstructed ways, such as the main stage backdrop.

This bright, colorful concept was intended to radiate “positivity and joy,” Plaks said, and to help create a warm, welcoming space that was “all about [attendees] feeling happy about themselves, feeling proud of themselves.”

As for next year’s festival, Plaks foresees continued growth, with the goal of increasing attendance to 20,000; this year, she estimates 15,000 people attended over the two days. This larger footprint will also involve moving to a new venue with more outdoor space, she said.

“We want to continue to be bigger and more accessible, to be this mecca for women from all across the country.” 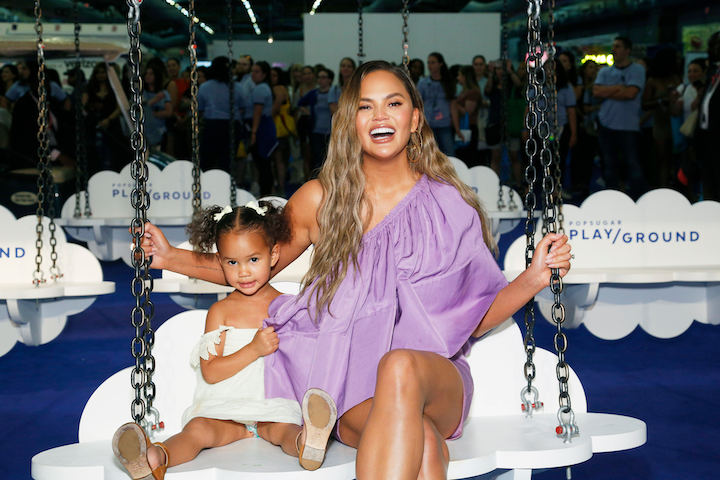 During her chat with BFF and celeb hairstylist Jen Atkin, headliner Chrissy Teigen shared anecdotes and advice to a packed crowd. Plaks said that organizers select speakers who are able to share their journeys and offer an optimistic perspective and joyful outlook. “We are always looking for someone that our audience can learn from,” she added.
Photo: Lars Niki/Getty Images for PopSugar and Reed Exhibitions 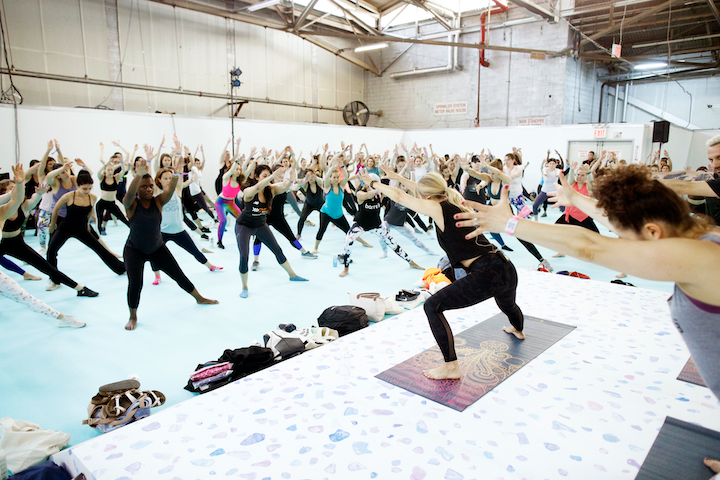 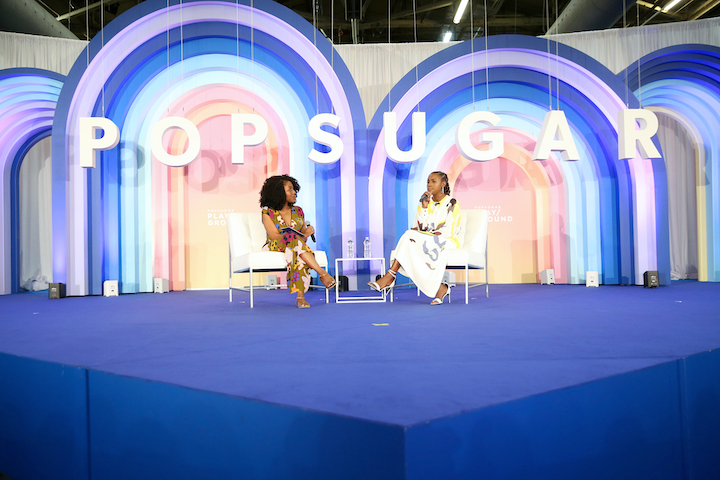 During the “Be Your Own Powerhouse” discussion, Issa Rae and Insecure executive producer Amy Aniobi chatted about how Rae turned a passion into her reality. When asked what advice she’d give her younger self, she said, "Chill. Stop comparing yourself to other people: What's meant for you is meant for you and only you.”
Photo: Monica Schipper/Getty Images for PopSugar and Reed Exhibitions 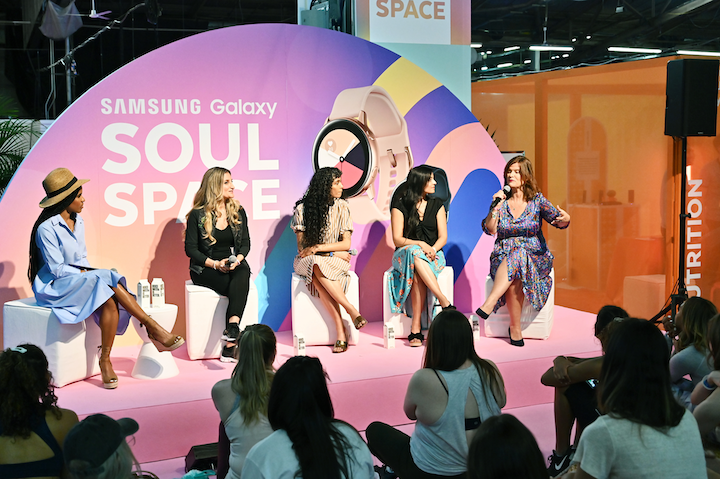 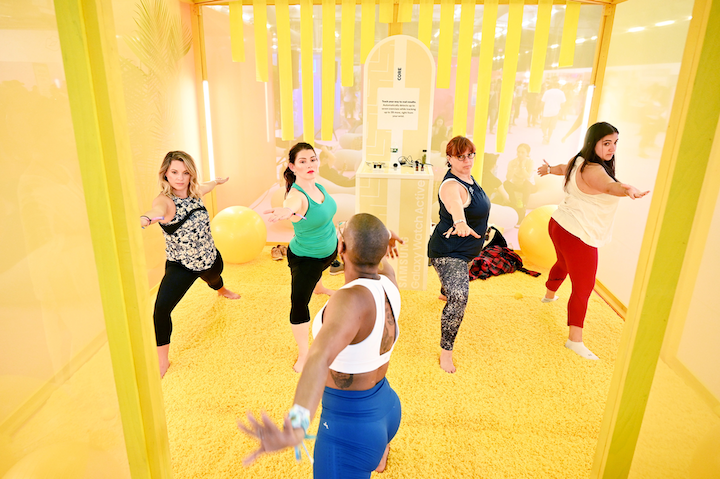 In addition to the stage, the Samsung Galaxy Soul Space included partitioned-off areas for activities such as yoga.
Photo: Bryan Bedder/Getty Images for PopSugar and Reed Exhibitions 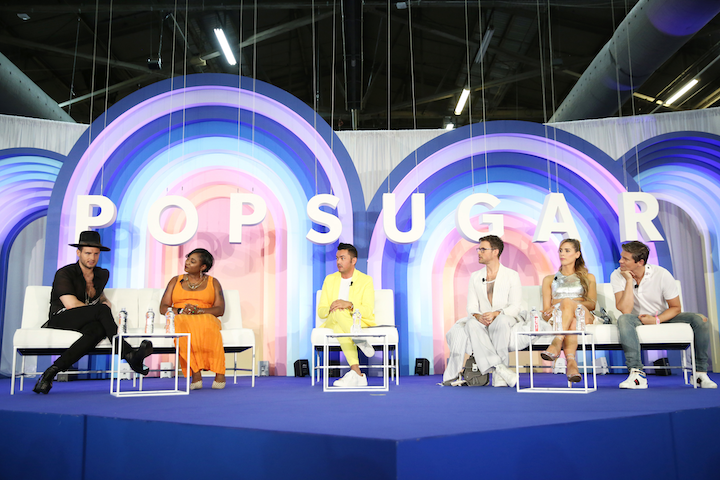 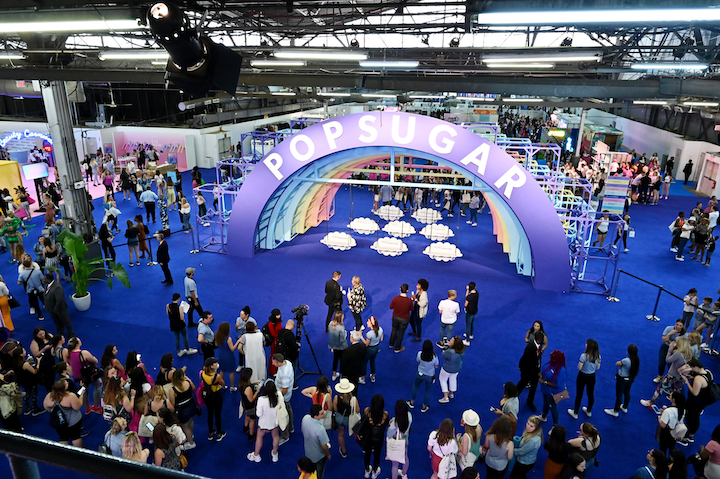 This year’s experience featured a more specific theme: “Powering Your Happily Ever After,” which, Plaks said, was about “respecting and celebrating every woman's journey no matter what that is.”
Photo: Astrid Stawiarz/Getty Images for PopSugar and Reed Exhibitions 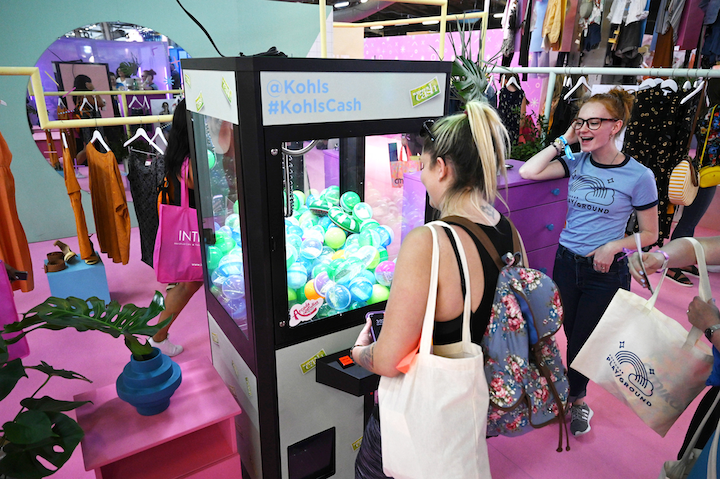 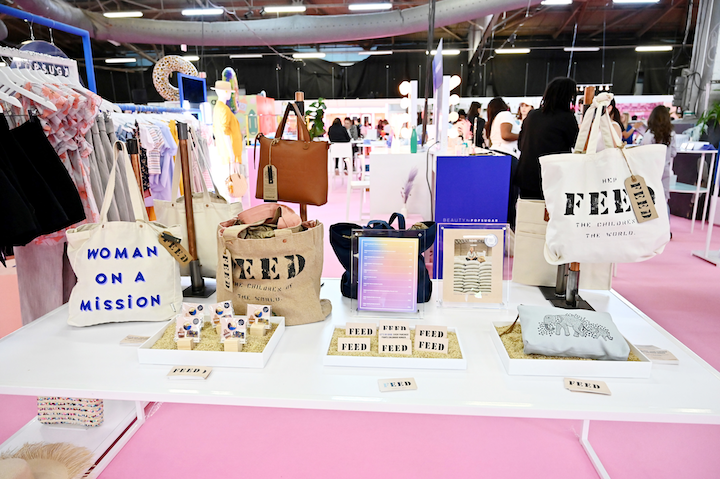 “The Mall of the Future” area included the Pop Shop, an area curated by PopSugar editors with exclusive collaborations.
Photo: Astrid Stawiarz/Getty Images for PopSugar and Reed Exhibitions 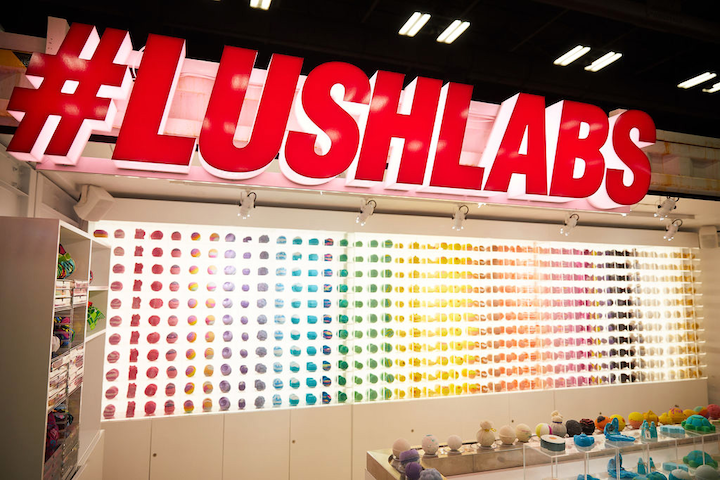 Based on Lush’s Harajuku shop, #LushLabs, a new mobile tour by the U.K.-based cosmetics retailer, made a stop at PopSugar Play/Ground to showcase its bath bomb app, which identifies the products, displaying ingredients, pricing, and videos of the fizzers without the need for signage, packaging, and plastic waste.
Photo: Courtesy of Lush 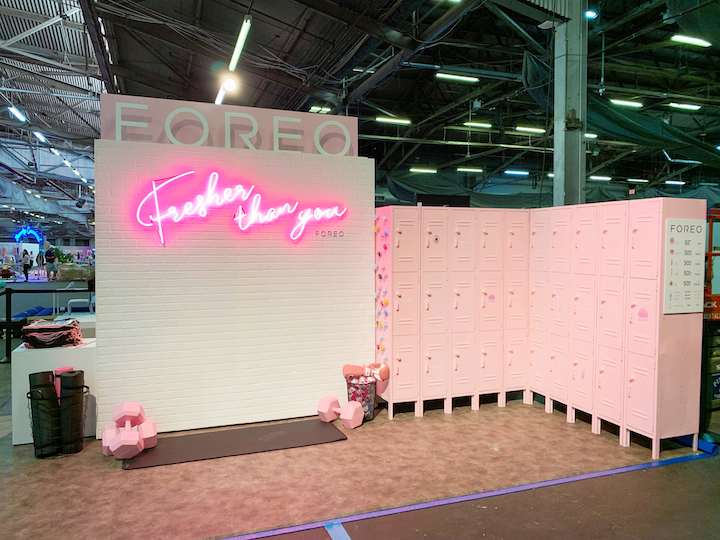 Foreo, the Swedish beauty and wellness brand that makes silicone facial cleansing devices, launched its newest device, Luna 3, at the festival. The booth, produced by Stoelt Productions, featured a circuit-style workout for your face, with each station combining the brand’s devices with correlated face yoga moves. Plus attendees could pose in front of a locker room-inspired photo setup.
Photo: Courtesy of Stoelt Productions 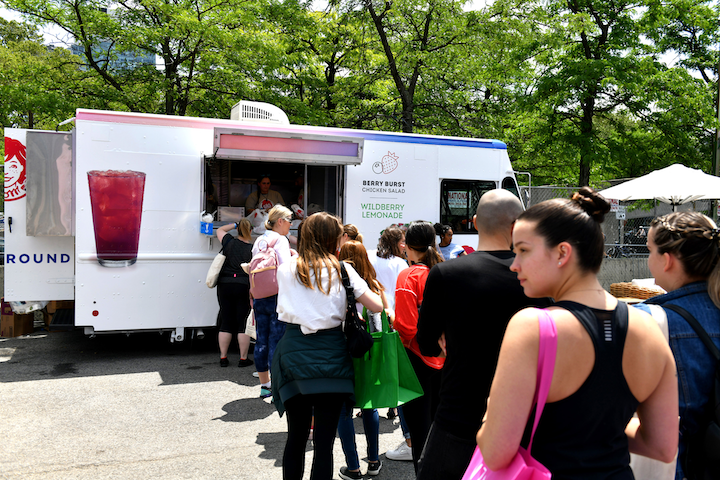 Once again, Wendy’s was on site with its food truck, handing out complimentary salads to festivalgoers.
Photo: Craig Barritt/Getty Images for PopSugar and Reed Exhibitions
More in Experiential, Activations & Sponsorships