To amp up the excitement at the Made of Honor premiere, Columbia Pictures staged a real-life wedding as part of the festivities.

Mimi O'Connor
On Monday night, Michelle Golightly and Shaun Bollinger of Carlyle, Pennsylvania, got married in the presence of 30 of their closest friends and family. The ceremony had all the makings of an intimate affair—unless you count the phalanx of paparazzi on hand, spectators watching the proceedings on a JumboTron across the street, and the fact that Entertainment Tonight's Mary Hart, legally ordained for the occasion, officiated. And that Patrick Dempsey was there to promote his latest film, Made of Honor.

As winners of a contest sponsored by The Knot and Sony Pictures (Columbia's parent company), the now newlyweds gamely provided the central publicity stunt for the premiere of Dempsey's new romantic comedy, in which the actor adopts the post of maid of honor in an effort to win back the woman he loves. (The public voted at the film's Web site to determine who would win the prize, which, in addition to nuptials prior to the screening, included a European vacation, a wedding dress, rings, a $10,000 check, and more.)The task of creating the scene for the wedding and premiere at the Ziegfled Theater went to 15/40 Productions, which worked with Noble Security to close off most of 54th Street for the affair. "Being able to close two thirds of this street is a big deal," said 15/40 president Craig Waldman, who worked with Columbia Pictures senior president of special events Alison Bossert. "It's like a full L.A. Hollywood premiere in New York. The city doesn't really do that."

Tenting swathed in white chiffon, a pink carpet, 50 suit-sporting, bouquet-carrying male model types, and oversize arrangements of roses, cherry blossoms, and peonies all helped set the tone for both the scheduled marriage and the premiere of the nuptial-themed film. A 16-piece orchestra positioned on a tiered stage played traditional wedding music before and during the ceremony, and the couple's guests and assorted contest winners seated in nearby bleachers got rose petals and soap bubbles to throw and blow, respectively, at the conclusion of the ceremony.

Following the screening of the movie, the after-party-turned-reception, produced by Benarroch Productions, took place at the swank Metropolitan Club. A crowd of 700, including Sony staffers, press, V.I.P.s, and the guests of the bride and groom, received white-glove service and feasted on a raw bar, sushi and dim sum, pasta stations, and passed appetizers such as caviar and bruschetta.

Towering centerpieces of crystal candleholders filled with fulsome arrangements of peonies, roses, and cherry blossoms topped tables in the already regal setting, and musicians played jazz standards and classical pieces in separate rooms early on in the party. (Later, DJ David Chang provided a set of Madonna, Rihanna, and the like.)

Charged with developing the wedding-reception-as-marketing-event was Benarroch Productions. "The hardest thing was integrating a real wedding with the traditional necessities into a party—pleasing the film studio, the actors, the press, and the family," said the firm's president and creative director, Chris Benarroch, the night of the event. (Efforts to do so included having Dempsey introduce the couple at the reception and being present at the cake cutting, as well as incorporating reception standbys such as a champagne toast and a first dance.)

The reception was indeed what many a New York bride could only hope for, should her budget allow. Golighty's father, at least traditionally on the hook for a hefty bill said, "It's pretty exciting, pretty mind-boggling. They're doing it again in August for friends and family in Carlyle." 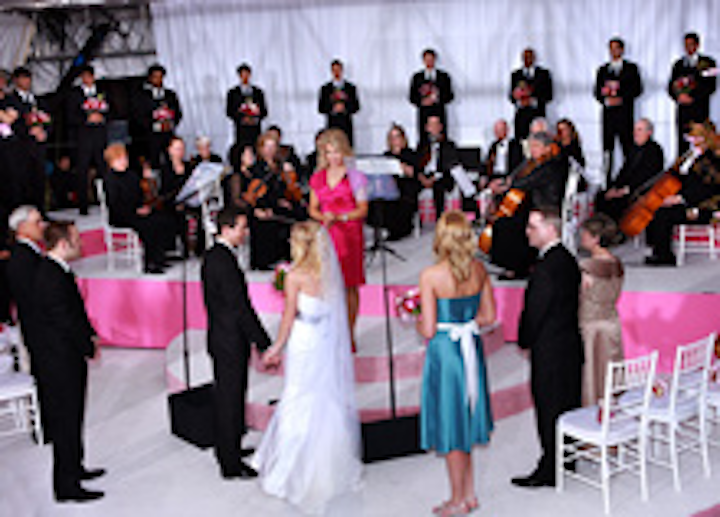 An actual wedding took place on the pink carpet at the Ziegfeld Theater.
Photo: Line 8 Photography 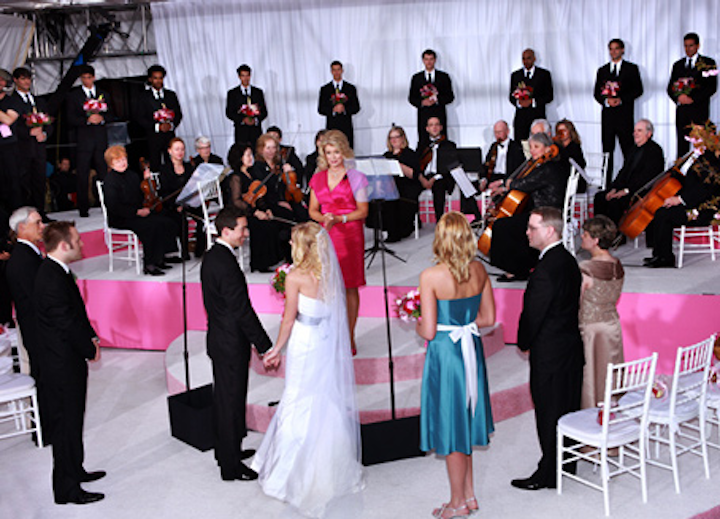 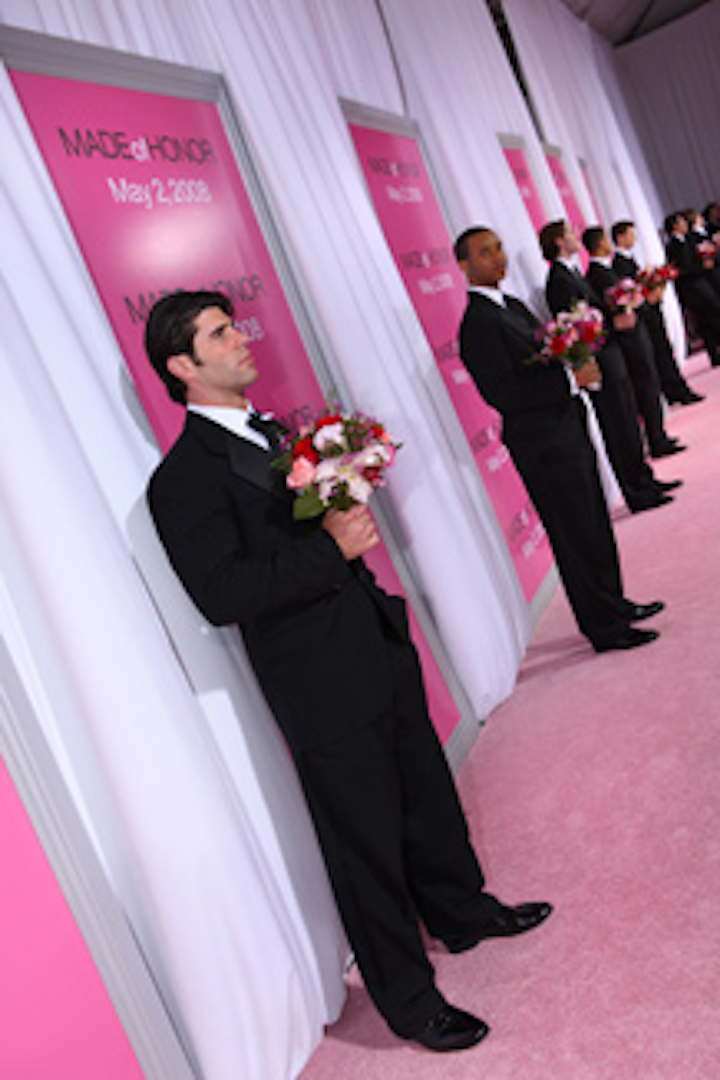 15/40 Productions hired 50 men from Beautiful Bartenders to serve as groomsmen at the premiere.
Photo: Line 8 Photography 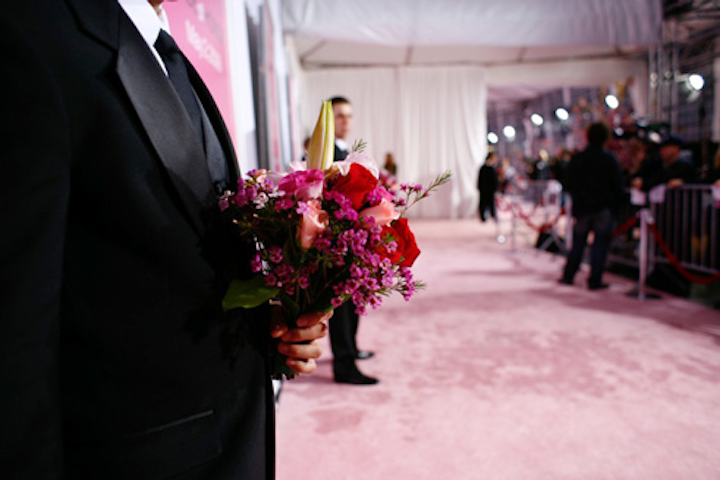 Ron Wendt designed floral arrangements for both the premiere and the after-party.
Photo: Brian Ach/Elevation Photos 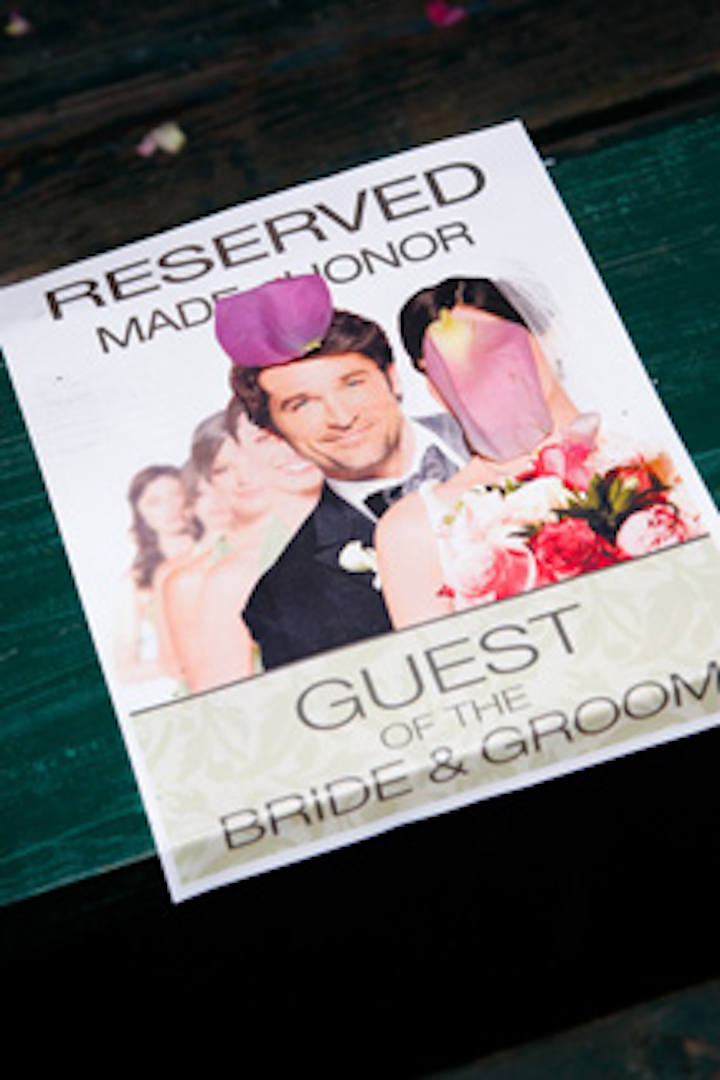 Friends of the bride and groom sat opposite the ceremony in bleachers.
Photo: Brian Ach/Elevation Photos 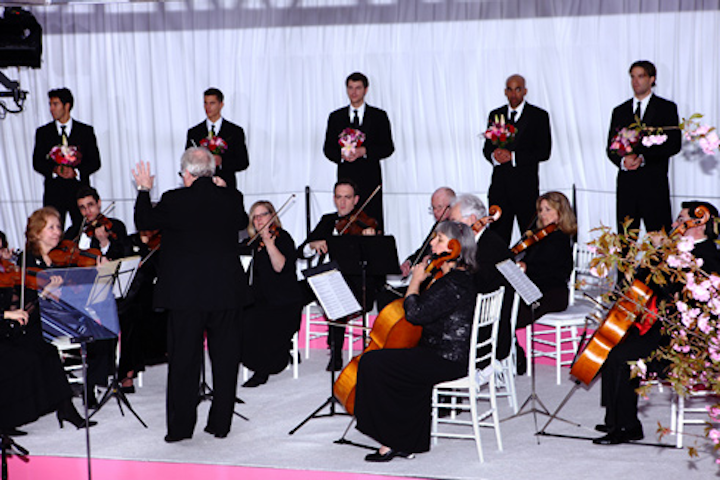 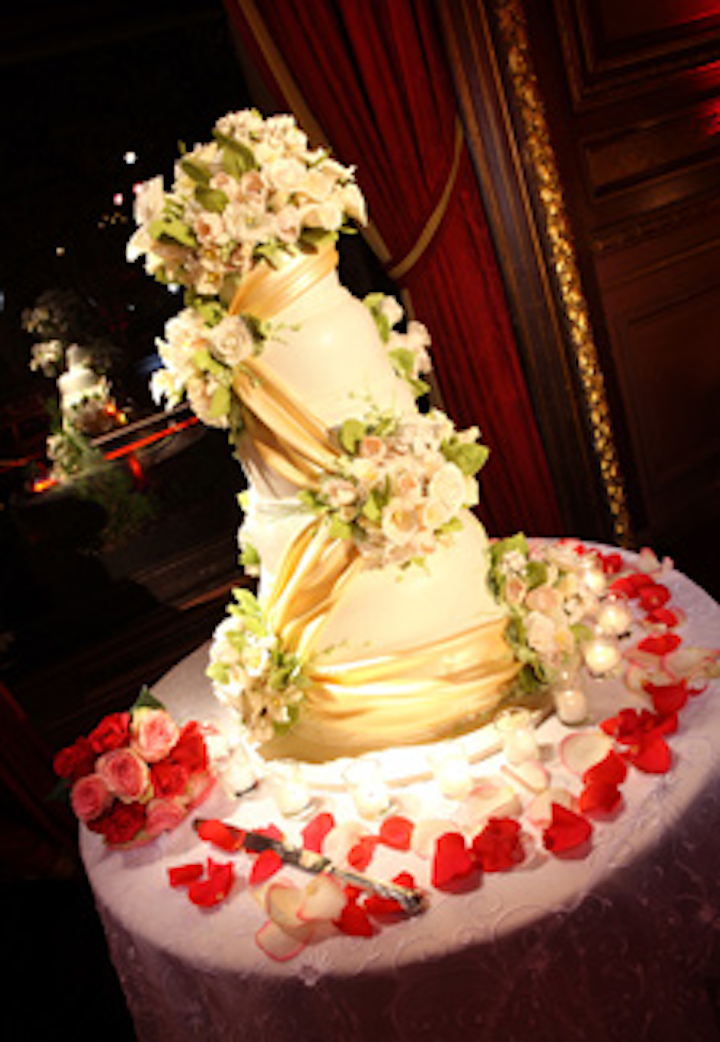 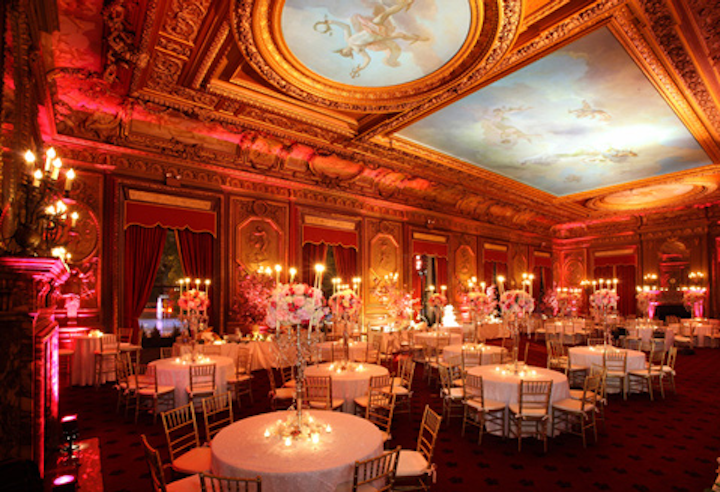 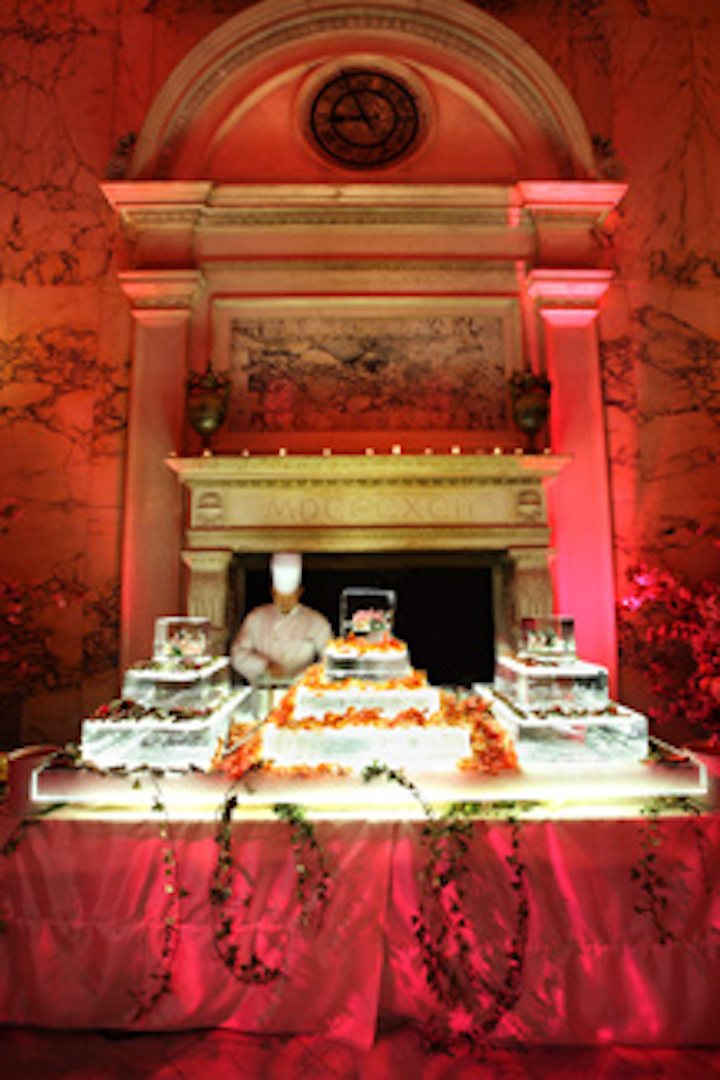 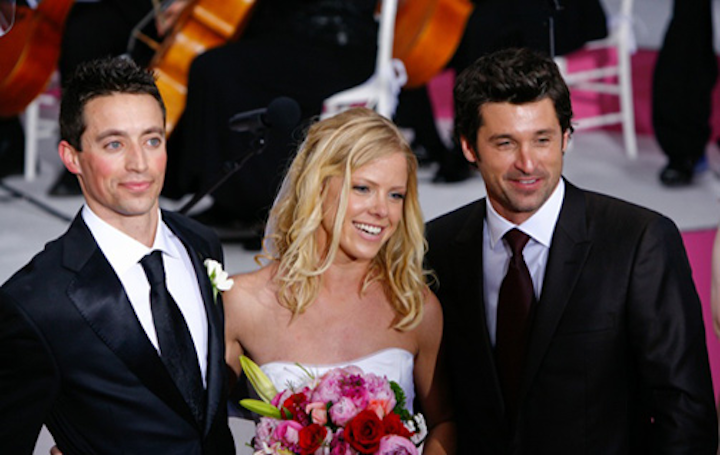 Patrick Demspey participated in reception traditions such as the cake cutting and welcoming the bride and groom.
Photo: Brian Ach/Elevation Photos 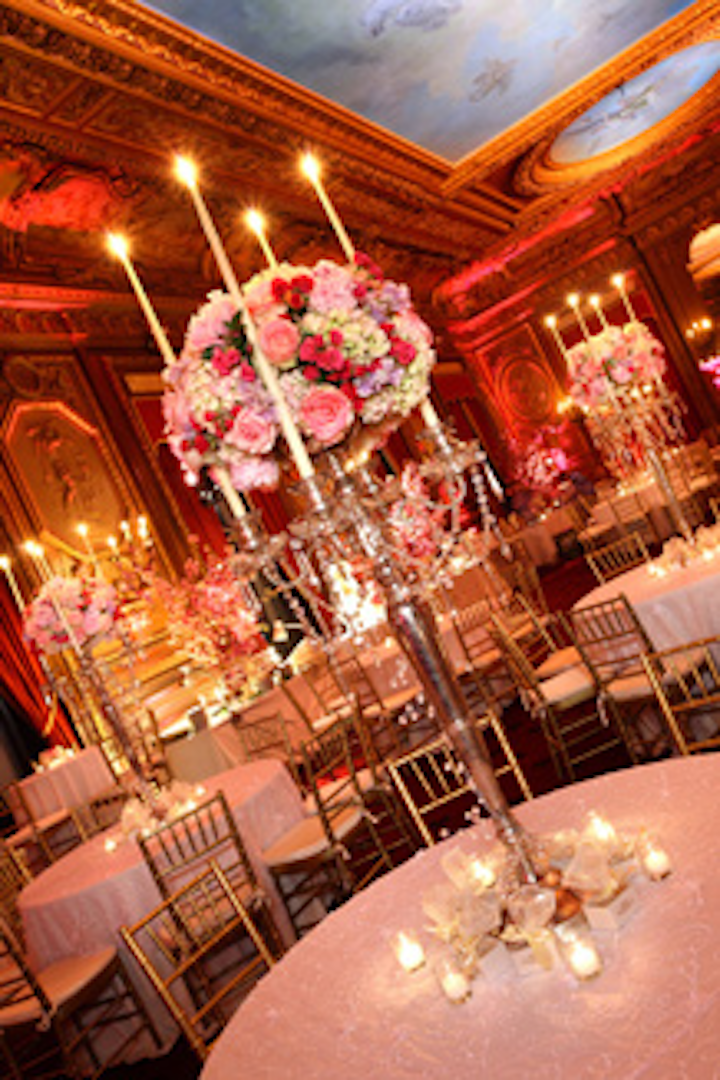