For its cruise 2015 runway show, Christian Dior shuttled more than 900 guests to Brooklyn—many via branded ferries.

As the gentrification of Brooklyn continues to bring luxury condo towers and high-end chains like Whole Foods, an increasing number of marketers are taking their events to the New York borough. A week after AOL hosted its 2014 NewFront at the Duggal Greenhouse, Raf Simons staged his cruise 2015 show for Christian Dior at the same venue in the Brooklyn Navy Yard.

More than 900 guests, including Rihanna, Marion Cotillard, Maggie Gyllenhaal, and Margot Robbie attended the storied French fashion house’s affair on May 7. And although the celebrities arrived by private car service, the majority of guests—at the house’s recommendation—traveled to the destination via free ferries emblazoned with the Dior logo and furnished with free champagne. Even Anna Wintour eschewed a chauffeured land-and-bridge route for a quick boat ride across the East River.

With 66 looks, the fast-paced outing—Dior’s largest to date—was staged to make the most of its locale. The iconic New York skyline served as a stunning backdrop to the show—the view made all the more striking thanks to Bureau Betak, which produced the show and built a custom floor raised some 16 feet above ground. Simons, a self-professed fan of flowers and water, said he liked the concept of having the view of Manhattan instead of being ensconced on the island.

Recognizing the importance of the United States market, Dior flew in many of its top clients from around the country; in total, they made up the largest single constituency.  The luxury brand also flew in 120 editors from countries including Japan, India, Russia, Dubai, the United Kingdom, and Germany, entertaining them with dinners at Crown and Indochine and, in between, lunch at the recently resuscitated Gotham icon Tavern on the Green. Out-of-town guests stayed at the Carlyle, while Simons and his team were holed up at the Pierre.

Following the show, guests were ferried back to Manhattan to attend a four-hour open-bar after-party at the Top of the Standard. 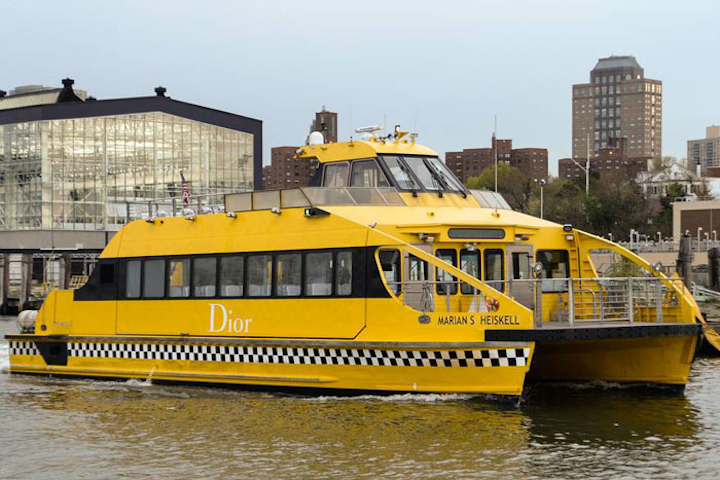 Most guests that attended the fashion show heeded Dior's advice to take one of several chartered ferries that left every 10 minutes from the East River pier at 35th Street directly to the Navy Yard. On board, champagne was served and even all the seats were individually wrapped in Dior cloth with the fashion house's name embroidered on the headrests. Following the show, the same ferries shuttled guests back to Manhattan for dinner and an after-party.
Photo: Courtesy of Dior 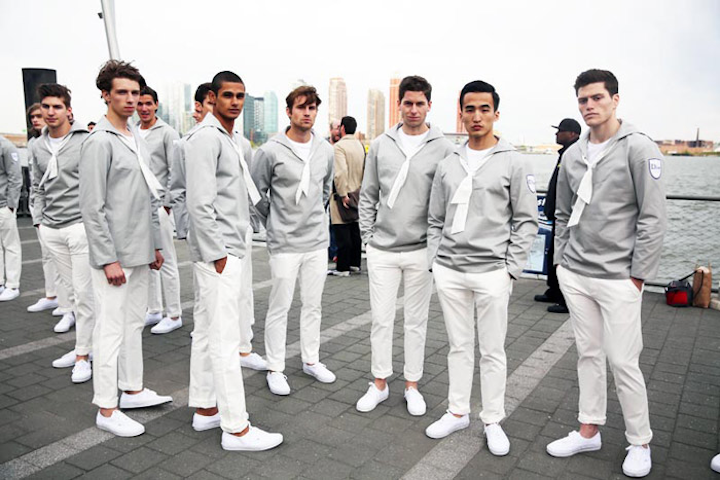 Upon arrival at the Brooklyn Navy Yard, guests disembarked from the branded Dior ferry and were met by a phalanx of handsome male models dressed in Dior sailor uniforms. While one group assisted and escorted guests off the dock and onto land, another was armed with seemingly never-ending flutes of champagne as well as glasses of water and orange juice.
Photo: Courtesy of Dior 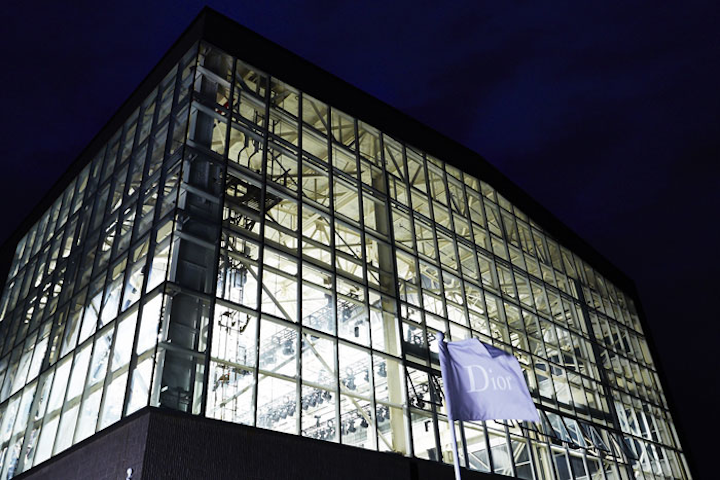 Dior branded the arrivals dock as well as the side of the Duggal Greenhouse with simple grey flags in the house's signature color.
Photo: Courtesy of Dior 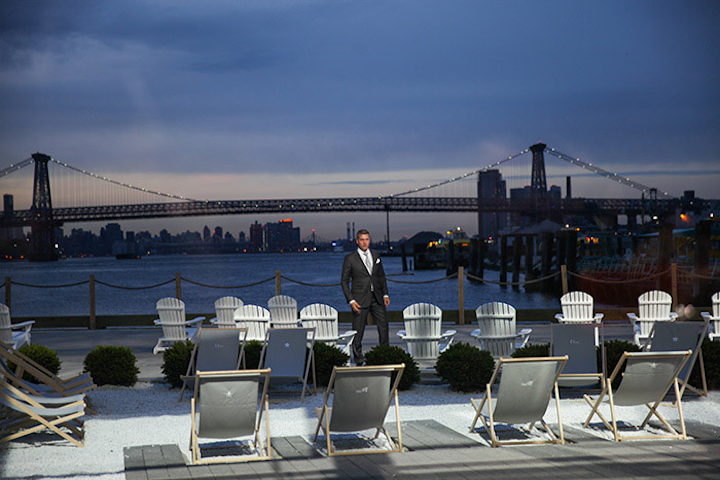 Guests were encouraged to mill about outside the venue, posting scenic shots of Manhattan to Instagram, smoking, and drinking. Perhaps unexpected-—and unavoidable-—was the slight whiff of a foul odor that wafted onto land from the East River.
Photo: BFAnyc.com 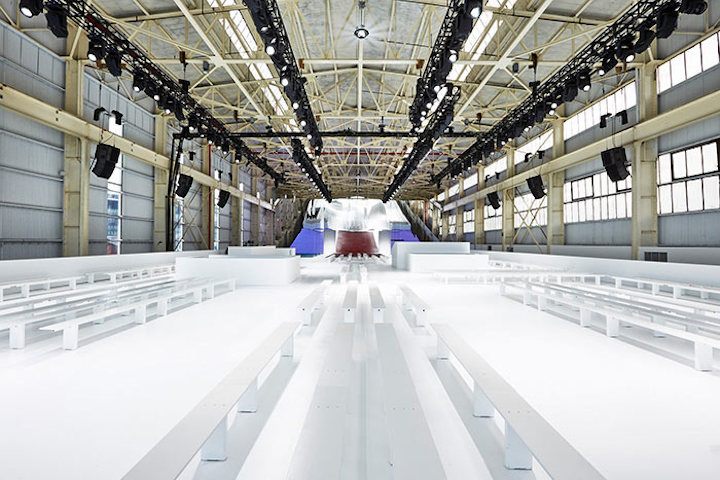 Inside the massive Duggal Greenhouse—the same venue where Alexander Wang showed his fall collection in February—Bureau Betak created a gleaming white venue. To provide guests with an optimal view of the cityscape and river and to put them at window level, Betak constructed an entire floor. The floor was 16.4 feet high and sat on top of the existing ground floor; it was accessed via multiple staircases.
Photo: Courtesy of Dior 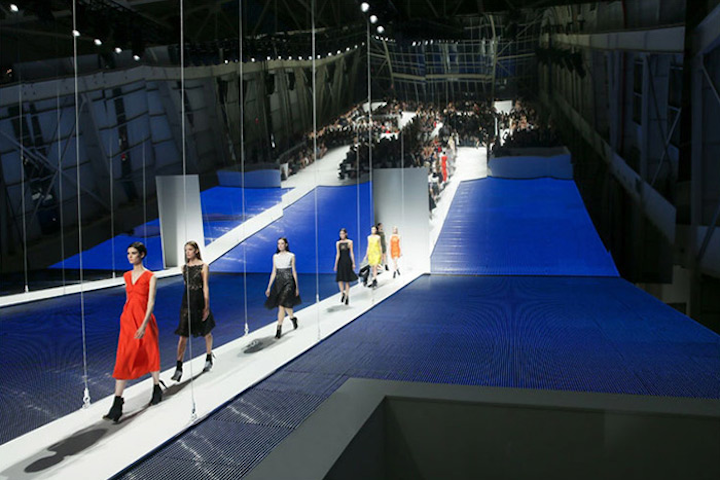 Across from the windowed expanse, a 29.5-foot-high mirrored wall reflected a floor of thousands of LED lights on which oversize images of 23 patterned Dior scarves, including an archival riff on the American flag, were projected. The event was Dior's biggest resort show ever in terms of attendance—although the 66 looks were impressive on their own.
Photo: Courtesy of Dior
More in Programming & Entertainment