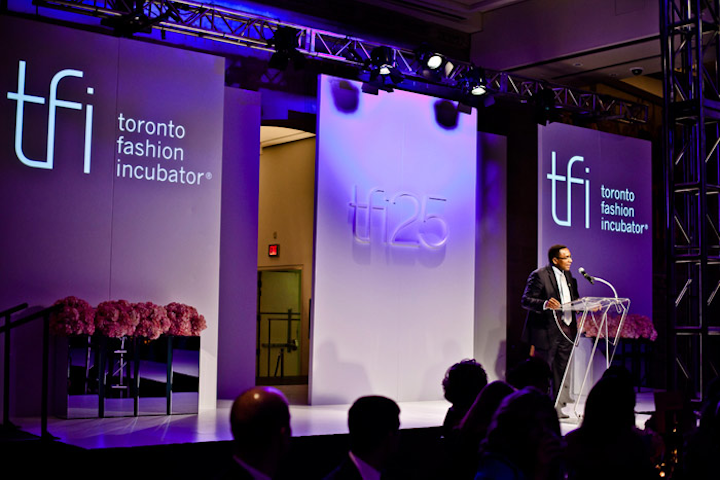 A three-dimensional T.F.I. logo marked the centre of the multipaneled runway backdrop in the V.I.P. area. Pink hydrangeas bordered the stage.
Photo: Josh Fee for BizBash

Toronto’s fashion folks flocked to the Royal Ontario Museum on Thursday for Toronto Fashion Incubator’s 25th anniversary gala. In additional to the annual New Labels fashion competition, the evening included a V.I.P. and patrons dinner, a Barbie fashion show, and a retrospective installation. “This is our 25th celebratory year so we wanted to do something exceptional to mark this historical event,” said Susan Langdon, executive director at the nonprofit, which is responsible for nurturing the careers of Canadian fashion designers. “Choosing the Crystal at the R.O.M. for our incredible gala is wonderful. That really helped to elevate the status of the event.” The event attracted 240 V.I.P.s and an additional 460 after-party guests, as well as 41 sponsors, 23 of which were new this year.

The configuration of the evening was complex and pink draping helped to create two separate spaces during the event. The Currelly Gallery housed the V.I.P.s and the Crystal Court hosted the after-party guests, who arrived at 8.30. V.I.P.s were treated to dinner, the Play With Barbie Fashion Show, and a performance from singer Anastasia A. At 9.45, the curtains between the spaces opened and the T.F.I. New Labels fashion show began, running simultaneously in both rooms; after a model walked the V.I.P. runway, she walked backstage to the entrance of the after-party runway. “It’s complex, but it’s very cool,” said Candice Chan, creative director at Candice&Alison Luxury Event Management, who worked on the event with Alison Slight.

The decor was designed to be as elegant as the black-tie dress code. Working with the flower motif from the invitations and the incubator's brand of pink, the R.O.M. was filled with floral arrangements made up of different pink flowers. Gloss black furniture added contrast. Custom campaign imagery, pink petals, sponsors, and video footage from T.F.I. designers over the past 25 were projected on to the angular white walls of the Crystal.

Installations and sponsor activations added to the visuals. “There are a lot of different elements that helped make the event as multidimensional as it is, but everything had to always be consistent and tie in with the original theme that we had created,” said Chan. Chan and Slight worked with sponsors like the Yorkdale Mall and Reliable to make sure their activations matched the look. The T.F.I. retrospective and Play With Barbie installations also became part of the decor in the Crystal.

In addition to a complicated event schedule, the R.O.M. came with a few difficulties, including the fact that it's a functioning museum and there are limits to what can be brought in for conservation reasons. “The ROM as a venue has many challenges to work with, but the impact of its beauty, scale, and prestige is so worth it,” said Chan. The events team had just three-and-a-half hours to set up after the museum closed to the public. With a team of 300, everything was ready to go when the doors opened at 6.30.

Edmonton designer Sid Neigum won the T.F.I. New Labels competition. His prize includes a fashion spread in Flare magazine, a design studio at T.F.I., and $25,000. Proceeds from the gala went to support T.F.I.