5 Ways Brands Should Be Using Technology to Reach Consumers

At Digital Entertainment World in Los Angeles, tech and digital media experts shared their insights and predictions on social media influencers, live streaming, and the rise of AR and VR. 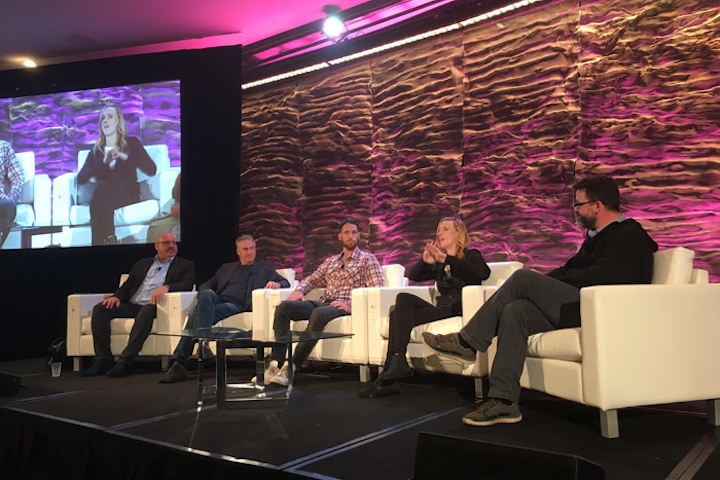 (From left) Seth Shapiro of the Television Academy, Ted Schilowitz of Paramount Pictures, Kevin Cornish of Moth & Flame, Christina Heller of VR Playhouse, and Ben Grossman of Magnopus shared their predictions on the future of virtual and augmented reality.
Photo: Claire Hoffman/BizBash

A big topic of conversation was the ways brands can use modern technology—such as social media, live streaming, and VR and AR—to reach and incentivize consumers. Read on for tips and insights from Paramount Pictures, Tastemade, Verizon, and more.

1. Don’t be afraid to use influencers.
“Social media influence is no longer a niche,” declared Greg Isaacs, chief product and marketing officer of advertising firm Branded Entertainment Network. He cited a study that said millennials trust a social-media star’s recommendations almost as much as a recommendation from their best friends.

The key, Isaacs continued, is to find the right influencers and spread the wealth between them. Don’t pick just one person with millions of followers; you’ll reach more people if you use several influential people across trusted platforms such as YouTube, Facebook, Switch, and Snapchat.

Oren Katzeff, head of programming at food-focused studio Tastemade, noted that brands need to work closely with influencers to craft the content they produce. “Think about what’s really important for the brand, then be smart and thoughtful about who you team up with,” he says. Brands should be building their own campaigns and working with influencers who can add to it, not dictate it.

Brands should also aim to create long-term relationships with influencers who have been effective in the past. “Build up more of a rapport so you can trust them with your brand more,” suggested Anathema Ruys, the senior vice president and managing director for marketing agency Carat. “And understand the approach an influencer takes and make sure it works for you and the audience you’re trying to reach.”

Social-media consultant Natalie Zfat, who advises brands such as Samsung and American Express, agreed with the power of influencers—and thinks they are actually more effective than celebrity endorsers. “A study from MuseFind showed that 92 percent of consumers say that when an influencer endorses a product, it’s more influential than when a celebrity endorses it,” she said. “Celebrity messages are falling short because we know these are actors who are being paid a lot of money.”

Zfat broadened the definition of an influencer, too. “To me, an influencer is any sort of brand ambassador, any fan of a brand who posts on social media,” she suggested. “It doesn’t have to be a million-dollar endorsement. It can be someone who simply represents your brand well.”

2. Use different social media platforms for different things.
Katzen emphasized the importance of tweaking your content for each platform. “You can’t just create a single piece of content and slap it everywhere,” he said. “Think about each platform and what works for it, and make sure the brand’s story is integrated in a natural way.”

Ruys noted that the organic reach varies for each platform. “Facebook is enormous and is still absolutely central to content distribution,” she said. “But because it’s so popular with people and brands, we’re seeing fewer of the big, creative, standout campaigns. That means some of the smaller platforms are opening themselves up to unique branding opportunities.”

Katzeff noted that Snapchat and Instagram Stories have created creative opportunities for Tastemade to tell a unique story every day. “Snapchat has a younger audience while Instagram Stories is a bit older,” he noted, saying that brands need to think about the entire lifecycle of an audience and how to keep them interested as they go through different life stages.

“And all this can hopefully lead to real-life platforms,” continued Katzeff. Build up loyalty through social media, then “bring it off digital and into real-life events and campaigns,” he suggested.

3. Understand the power of live streaming.
Zfat predicted that live video will become increasingly popular in 2018, citing a recent event she helped produce for fashion designer Rebecca Minkoff. “We could only fit 50 people in the room, but we used Facebook Live to stream it—and ended up with 23 million impressions,” she said. “We took an event that was going to be offline and small, and took it to a viral place.”

Scott Goldman, the principal product manager for Verizon Digital Media Services, thinks that new technology has changed human behavior and attitudes toward live streaming. “A few years back, no one would trust Internet streaming to watch something like the Super Bowl,” he noted. “But now you see more and more brands, like TechCrunch for example, putting on live events and live streaming them to get people to read and engage with their properties.”

Adam Rymer, president of media company Legendary Digital Networks, said that the rise of live streaming might actually incentivize more face-to-face interaction and community-building. “So much content is available on demand that there’s no incentive to watch something at the same time as someone else—we don’t have many ‘water cooler moments’ anymore,” he said. “When something is live, it creates an incentive to be a part of the experience. Live really creates a unique moment where you can get an engaged audience to be a part of the show.”

4. Turn social media and digital content into action.
The panelists who discussed social media, influencers, and live streaming all emphasized the importance of defining key performance indicators to make sure channels are doing what they’re supposed to do. “Influencer marketing is really good for building brand awareness, but it doesn’t necessarily lead to direct action,” explained Ruys. So it’s important to run post-campaign reviews and make sure it helped move the needle—and be prepared to change strategy if it didn’t.

Thai Randolph, senior vice president of marketing and monetization for Kevin Hart’s Laugh Out Loud Network, suggested that marketers and brands define success together before starting any campaign. “What do we need to prove to the C.M.O.?” she asked. “At the end of the day, we’re all looking to build a relationship with the end goal of more money in mind—but we also want the audience to have a delightful experience. If they’re not thoroughly entertained, they’re not going to get your message.”

Zfat used an example of a Levi’s campaign, where the denim brand asked customers to share stories on social media of how they “live in Levi’s.” The brand hosted a live concert in New York’s Brooklyn Bridge Park—but instead of selling tickets, it asked guests to wear their favorite pair of Levi’s for admission.

“We had people wearing denim jackets from the '80s, wearing their ex-boyfriend’s jeans,” she said. “It emphasized the brand’s long legacy and led to thousands of stories about Levi’s being shared on social media.”

“This year at Sundance, people didn’t want to just see stuff in a headset because it was cool,” said Ted Schilowitz, a futurist for Paramount Pictures. “They’re now looking at the headset content as an artistic work, the same as any other piece of art at something like a film festival.”

He cited Pixar’s “Coco VR” experience—which allowed users to inhabit the body of a skeleton and explore the movie’s World of the Dead—as a recent example of how these new technologies can surprise and delight consumers and get them invested in the product.

Another recent example mentioned was Dreamscape Immersive's new “Alien Zoo” VR experience, which opened yesterday at the Westfield Century City mall in Los Angeles. The 12-minute experience aims to combine a theme park attraction with a blockbuster film, where attendees work together to “fight” alien predators.

“AR and VR really create a way to put consumers into the world of a movie or a brand,” said Ben Grossman, co-founder of visual effects firm Magnopus. “We’ve gotten past the early adopters who have their own headsets, and now we need to get people like my mom involved—it needs to be accessible to general consumers.”

“I think that 10 years from now, everyone will have some sort of portable device we’ll use at conferences and events,” continued Schilowitz. “The world will be our movie theater.”