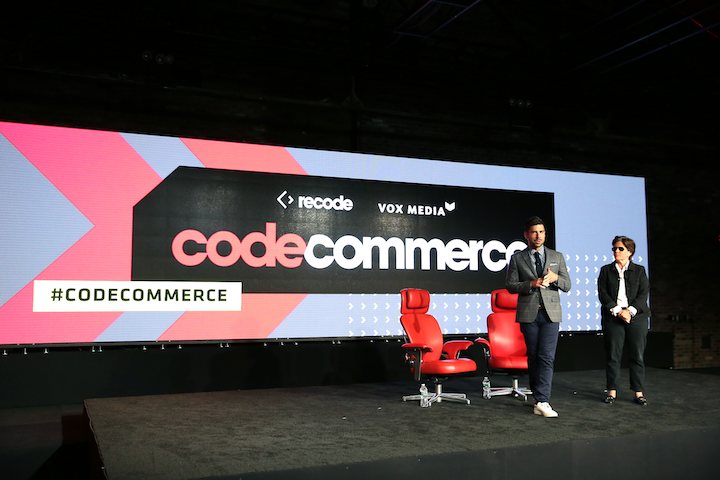 Jason Del Rey and Kara Swisher hosted the conference and interviewed speakers including Julie Wainwright, founder and C.E.O. of the RealReal, and Tara Walpert Levy, vice president of agency and brand solutions at Google, who appeared with the choreographer and YouTube influencer Kyle Hanagami.
Photo: Keith MacDonald

NEW YORK—Tickets to Recode’s signature event, Code Conference, are famously difficult to get. So Vox Media has sought to extend the brand by tackling subsets of the tech world as well as playing with the conference format, such as letting attendees drive some of their own agenda.

"We've always been the place where we talk about how technology is disrupting and impacting business and the power and potential of technology,” said Shannon Thompson, executive director of conferences, Vox Media. “What we realized was, many of our Code attendees were very interested in taking a deeper look at some specific industries.”

Conference verticals are developed and then last as long as they are relevant, Thompson said. An early example was Code Mobile about the telecom industry before mobile became ubiquitous in people’s lives. For retail, Vox launched Code Commerce. The third edition took place in September at Caldwell Factory in Chelsea, bringing together about 400 mostly New York-based banking and finance executives and chief marketing officers and founders of brands and retail outlets.

Code Commerce evolved as an evening event that took place during the Shoptalk retail show in Las Vegas to a standalone two-day conference that relocated to New York. "It was a great way to gauge interest,” Thompson said. “Putting our toe in the water gave us a sense for, there's really an appetite here.”

Vox pointedly selecting an industrial-style independent venue rather than a hotel ballroom, and brought on a handful of sponsors with meaningful activations rather than an expanse of trade show booths. 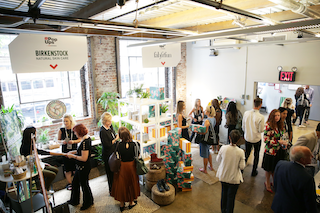 Guests passed by pop-up shops for Birkenstock, Fab Fit Fun, and Paravel on their way to the main stage. The brands each had their own modern commerce stories to tell and offered swag and services like hand massages.Photo: Keith MacDonald

“We integrate sponsors to provide a richer journey for attendees. It’s also about making an impact for the sponsor. … Some companies want the bigger trade show booth environment. Others see a smaller intimate event like ours as having more value. They stand out in a much bigger way.”

The programming offered a single track of speakers. In the main theater, the vibe was all business with a spare stage that featured one large screen as a backdrop and two red chairs. On Swisher’s Recode Decode podcast, she introduces guests by saying, "Today in the red chair is…" so the chair has become a signature part of Code events and reinforces the mission of live journalism.

"The hot seat represents a key point of differentiation. Not only from a branding perspective but from a core principle of what we stand for. It's our journalists on stage asking C.E.O.s of these companies hard questions. These are not softball questions."

“We're never going to put a sponsor on the stage with a journalist. That would obviously compromise our integrity,” Thompson said. “If Jeff Bezos wanted to speak, we absolutely would have had him on the stage. But those are separate. We do not ever cross those lines. There's never a pay to play.” 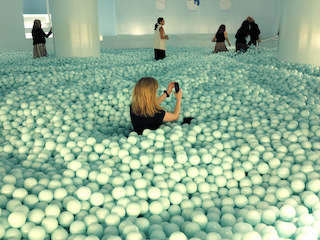 Attendees could sign up for one of five "on location" experiences at innovative businesses for tours and talks with executives. Sites included Color Factory (pictured), the experiential retail toy store Camp, and Intersect by Lexus.Photo: Courtesy of Vox MediaAnother dimension of the conference was "On-Location Experiences,” in which small groups of attendees visited innovative retail concepts, and “power lunches” at nearby restaurants with their own programming. Attendees provided their own transportation but were given Lyft codes for free or discounted rides.

The agenda left ample time for networking in a space that recalled a tech startup, including a self-serve table with packaged snacks from new brands as well as a classic candy bar. Amazon Pay sponsored a café with an espresso bar, and charging stations kept everyone’s devices powered up.

Vox extended the afterlife of the event by publishing video from the sessions after a short delay.

“Initially there was a lot of debate about this,” Thompson said. “You want people to feel like they're having the exclusive opportunity to hear this. Then we got over ourselves. If you want to be there, you will be there. There's a whole experience to being there. … If we go back to the core tenet of this, it's about live journalism. We want people to go back and see Kara's interviews, Jason [Del Rey]'s interviews, and C.E.O. interviews. As news breaks, we'll refer to that. All year long we're continuing to promote the content that came out of the conference.” 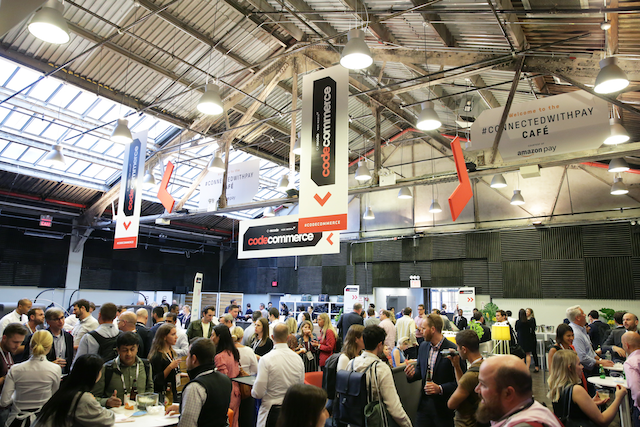