Back in the day, large-scale, hand-painted murals were the go-to form of advertising. Now, brands such as Delta, Adidas, and Refinery29 are bringing them back—bigger and better. Here’s a look at how those companies and more incorporated photo-friendly walls into event spaces or simply turned the “interactive” murals into the event itself. 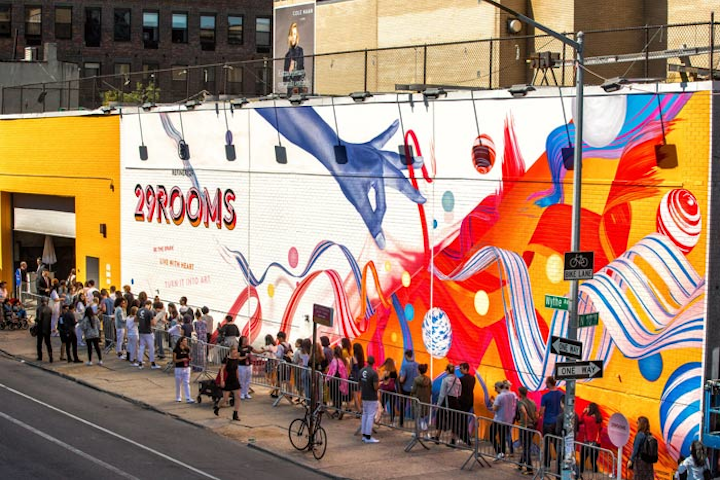 For the third annual iteration of Refinery29’s 29Rooms, which took place during New York Fashion Week in September 2017, Colossal Media created a vibrant entrance wall for the event. 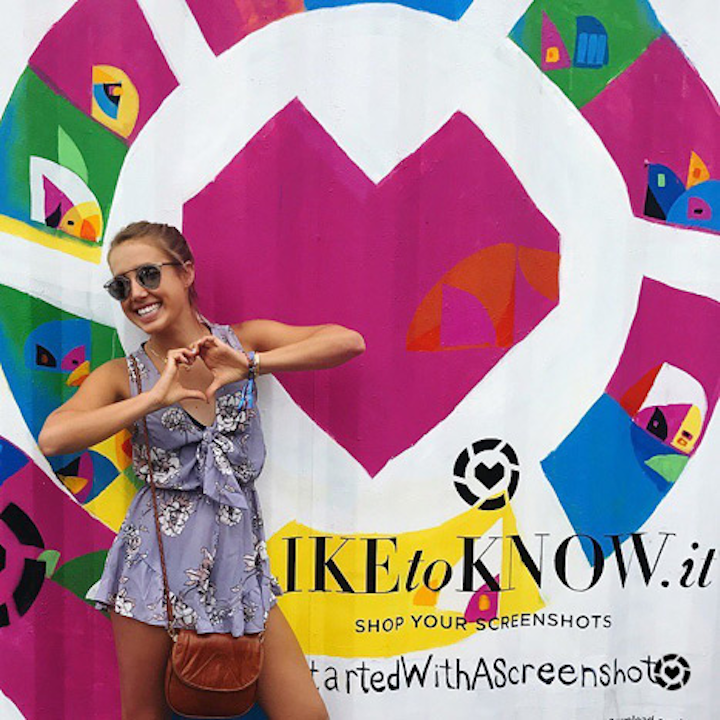 At last year's Lollapalooza in Chicago, RewardStyle, which helps influencers earn money through posts, installed a version of its LiketoKnow.it He(art) Wall to promote the app. Festivalgoers were encouraged to include the project’s hashtag #StartedWithAScreenshot with their posts. 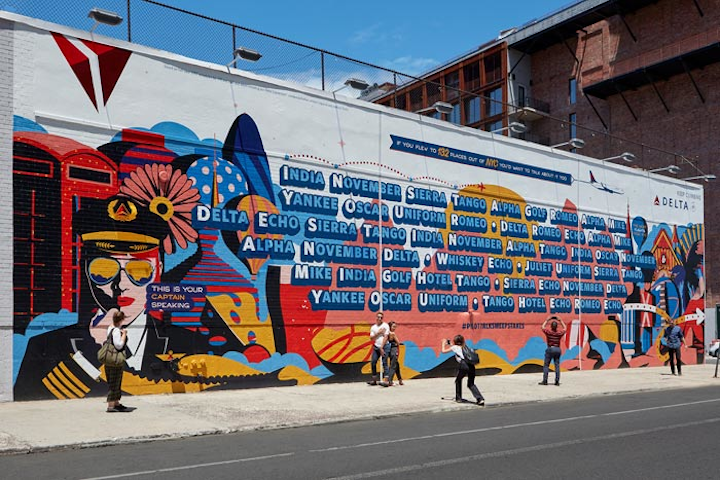 In June, Delta launched a marketing campaign geared toward New Yorkers that included its "Pilot Talk" mural. Consumers were invited to visit the massive painted wall on North 10th Street and Wythe Avenue in Brooklyn, which displayed the pilot’s alphabet (the official language of airline pilots e.g., Alpha, Bravo, Charlie, etc.). In June and July, folks could enter the #PilotTalkSweepstakes to win a pair of round-trip tickets by snapping photos of the pilot’s alphabet to spell out a city (or airport code) they wanted to visit and then posting the images to Instagram. Eight separate walls were installed throughout New York. 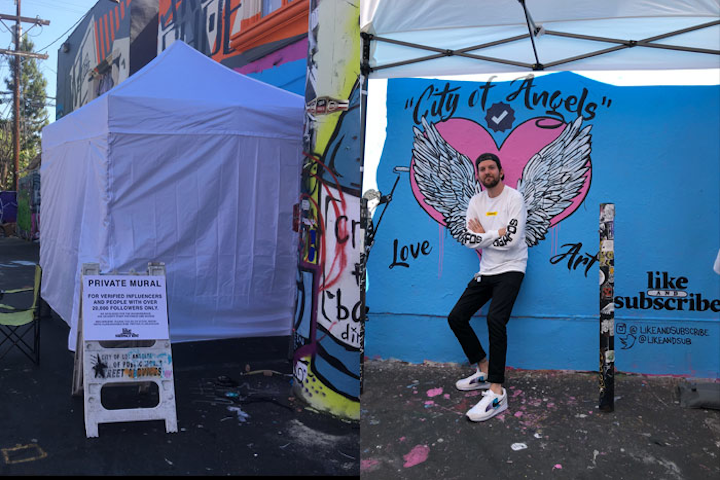 In June, a controversial mural in Los Angeles that was purportedly reserved for "verified influencers" was actually a guerilla marketing-style stunt to launch Like and Subscribe, an original series from Verizon's go90 and Tumblr starring DJ Dillon Francis. The series offers a satirical take on social media and follows a Hollywood manager and his influencer clients. The mural was hidden from the public in a tent guarded by security with a sign reading "Private mural: for verified influencers and people with over 20,000 followers only. We apologize for the inconvenience. See security staff for proof and access." 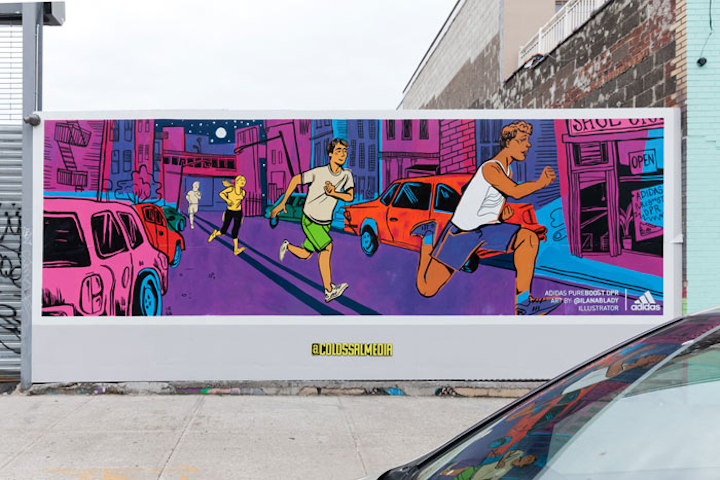 In July 2017, outdoor advertising company Colossal Media and Adidas’ Brooklyn Creator Farm launched a three-week outdoor art project across 10 walls in Brooklyn to promote the sportswear brand’s campaign for its Pure Boost DPR shoes, with a focus on urban running. Colossal also designed and produced postcards featuring a map of the outdoor gallery, which were available to shoppers at Adidas’ flagship store on Fifth Avenue. 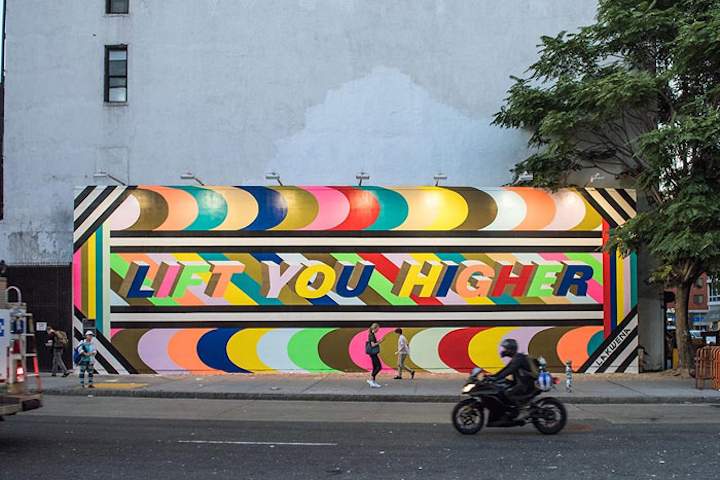 Goldman Properties, the owner of the Houston Bowery Wall in New York, partnered with Instagram to kick off the #KindComments initiative, which is part of Instagram’s commitment to foster kindness on its platform. The New York wall, which was revealed in September 2017 and was created by London-based street artist Lakwena Maciver, was the first in a series of 10 walls that were unveiled in Dallas, Chicago, and Washington, as well as cities in Brazil, India, and Indonesia. 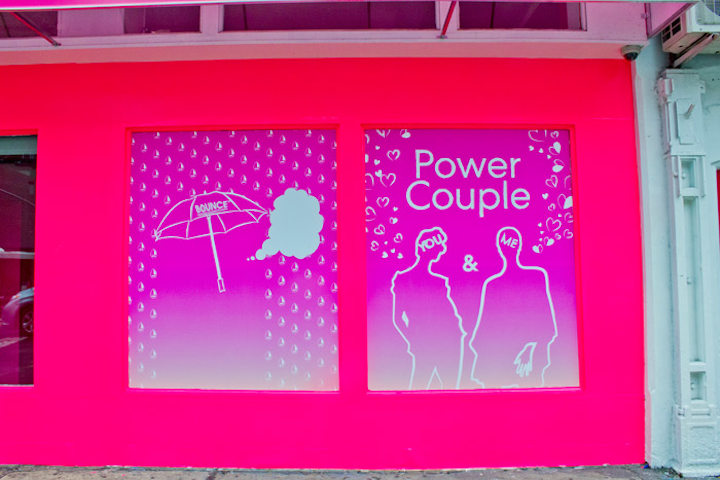 To introduce its newest product, Bounce Liquid Whip Long Wear Foundation, Beautyblender, which is known for its ubiquitous hot pink makeup sponges, created its first pop-up shop in downtown Manhattan in July. Doused in the brand’s signature bright shade, the bodega-inspired shop featured two Instagram-friendly murals on the exterior for visitors to pose in front of. The event was produced by HL Group’s event team. 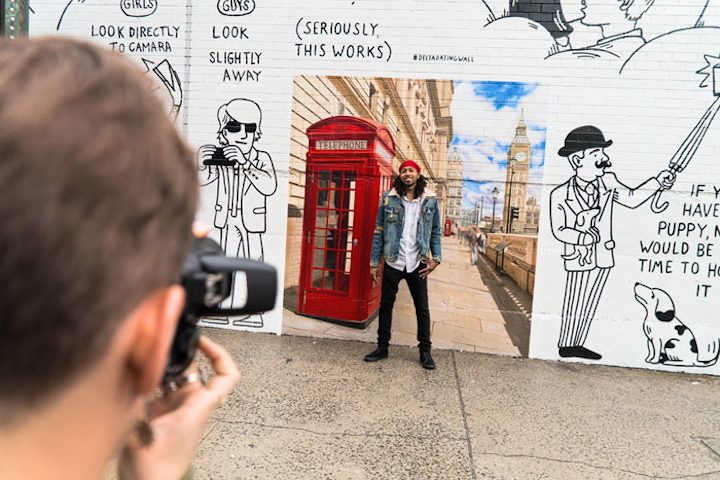 In June 2017, Tinder partnered with Delta Air Lines to host the “Delta Dating Wall,” a series of painted walls, by Colossal Media, with illustrations of international locations; the backdrops aimed to provide fodder for new profile pictures for users of the dating app. The wall—which was part of Delta’s “New York Is Go” initiative, celebrating its New York travelers—was located on Wythe Avenue in Williamsburg, Brooklyn, throughout the summer. In addition, Delta and Tinder hosted a singles-centric event, in which guests could get their photos taken by a professional photographer.