Absolut celebrated the launch of its sustainability platform with an Earth Day event that invited New Yorkers to exchange recyclables for cocktails. The vodka brand also unveiled an interactive billboard in Los Angeles. 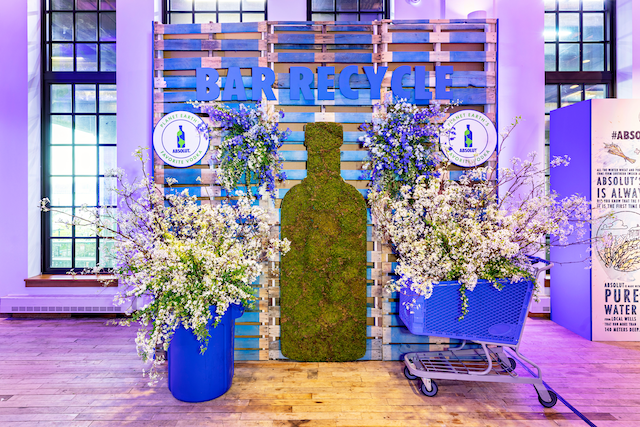 A step-and-repeat wall displayed a moss replica of the Absolut bottle against a wall of reclaimed wood, which featured the name of the event. White flowers poured out of a blue recycling bin and shopping cart.Photo: Dorothy Hong

NEW YORK—Absolut tends to deliver flashy events surrounding its marketing campaigns, but for its latest event, the vodka brand went for a low-tech, grounded vibe to coincide with Earth Day. For the launch of the brand’s campaign called Planet Earth’s Favorite Vodka—which  encourages consumers to practice sustainability—the brand held a private event in New York that encouraged attendees to trade in recyclables for cocktails in an environment where recycled materials were used as decor.

For Absolut Bar Recycle, which took place April 22 at West Edge, the brand tapped Team Epiphany to design an interactive space with vignettes and bars made from recycled materials and natural elements such as recycled wooden pallets, bubble wrap, and fresh flowers and greenery. The brand’s mission was to encourage locals to become better recyclers and raise awareness for recycling efforts in the city.

"We wanted to show guests that recycling isn’t just about separating our trash and sending it off to recycling centers," said Nicole Garcia, head of digital activations at Pernod Ricard. "There are many ways of turning trash into treasure, such as upcycling materials to create beautiful pieces of art and functional repurposing such as using crates as shelves and tables."

Attendees were invited to exchange their recyclables for cocktails served in mason jars, pose for photos at the numerous vignettes, and learn more about Absolut’s campaign by observing wood panels with illustrations by Dallas-based artist Sunflowerman. Guests could also take home custom candles from Brooklyn-based studio Joya, which had fragrances inspired by the campaign. To further its local mission, the brand donated $50,000 to Plastic Pollution Coalition to reduce waste in New York.

Along with a Coachella activation themed around sustainability and diversity, Absolut also kicked off its campaign on the West Coast with an eye-catching installation in Los Angeles. In March, the brand partnered with nonprofit Global Inheritance to organize a massive cleanup at Ballona Creek. To showcase the impact of the event and inspire people to take action, Absolut then partnered with artist Dan Tobin Smith to turn the collected trash into an interactive 3-D billboard.

The colorful billboard, which was unveiled on Earth Day at L.A. Live, incorporates augmented reality by inviting passersby to hold their phones up to the installation, unlocking content that highlights the riverbank cleanup and the making of the installation.

Additionally, on Earth Day, Absolut tapped nearly 100 brand ambassadors in 41 cities across 17 states to organize more than 40 local cleanup events. And to support the launch of the brand’s upcoming limited-edition Absolut America bottle this summer, the brand is supporting Plastic Pollution Coalition and FinalStraw’s mission to end plastic straw use.

"Absolut has always done things differently, and now we're reframing what it means to be a sustainability-focused brand," said Regan Clarke, brand director for Absolut, Pernod Ricard U.S.A. "With Planet Earth's Favorite Vodka, we hope to breathe new life into sustainability—inspiring others to do what's right for the environment, and one another, while always remembering to celebrate progress."

See how Absolut brought the theme of saving the planet to life below. 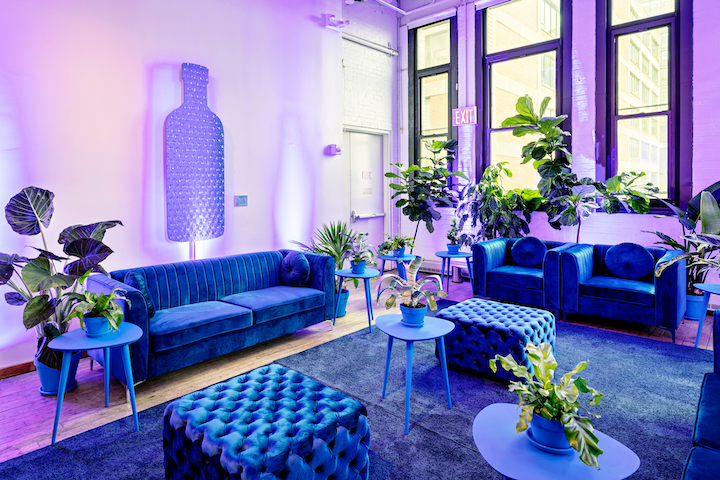 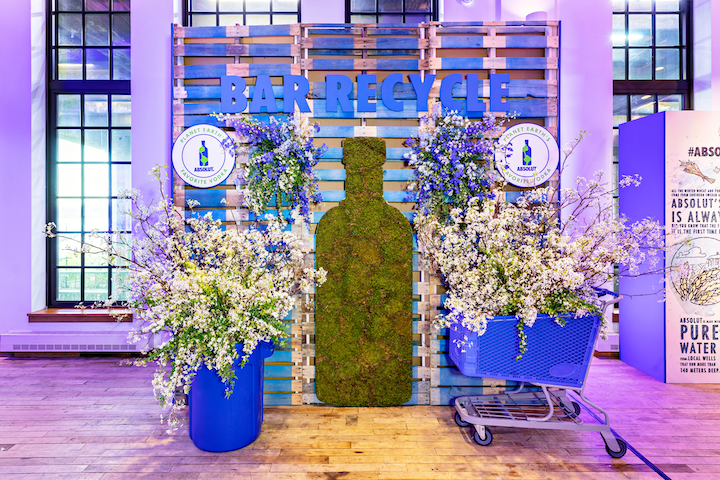 A step-and-repeat wall displayed a moss replica of the Absolut bottle against a wall of reclaimed wood, which featured the name of the event. White flowers poured out of a blue recycling bin and shopping cart.
Photo: Dorothy Hong 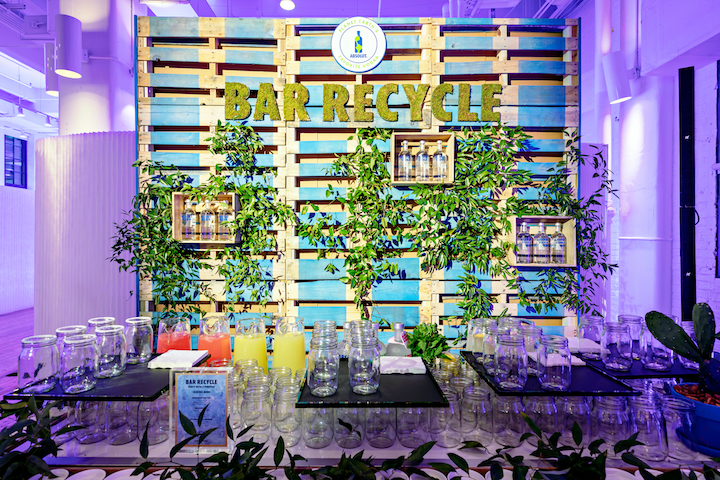 Another wall of wooden pallets was located behind the bar, with green moss used to spell the name of the event and shelves holding Absolut bottles.
Photo: Dorothy Hong 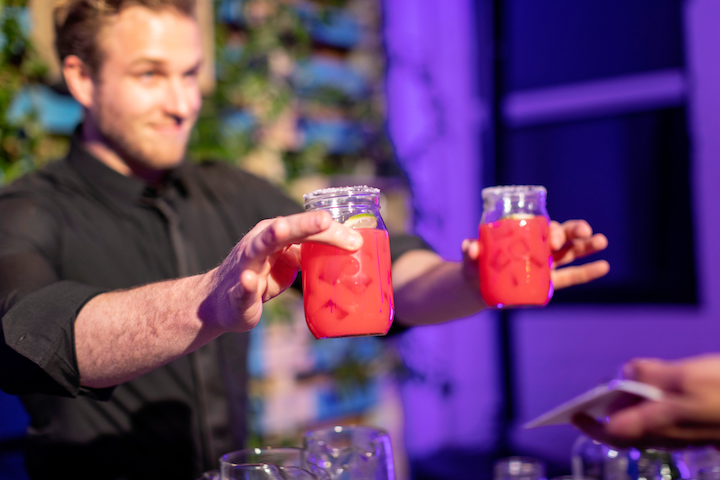 In exchange for recyclables, guests were served mason jar cocktails including the Watermelon Lime Time, which had Absolut Lime, watermelon juice, and a sugar rim.
Photo: Dorothy Hong 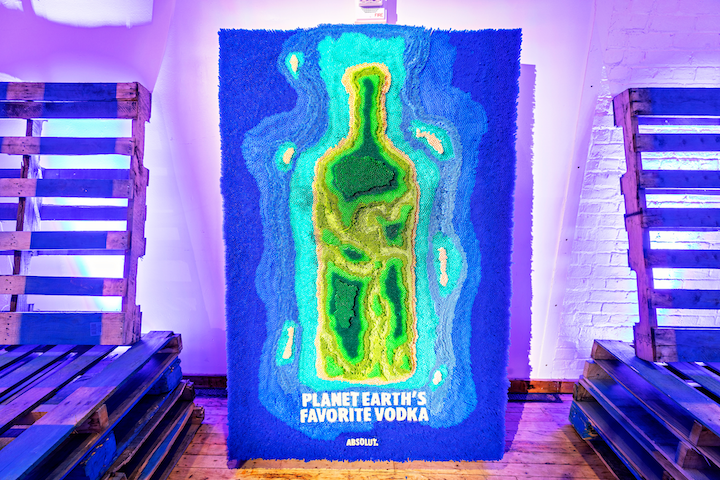 Another installation promoting the campaign depicted the Absolut bottle as land surrounded by water. The wall was created entirely with recycled straws.
Photo: Dorothy Hong 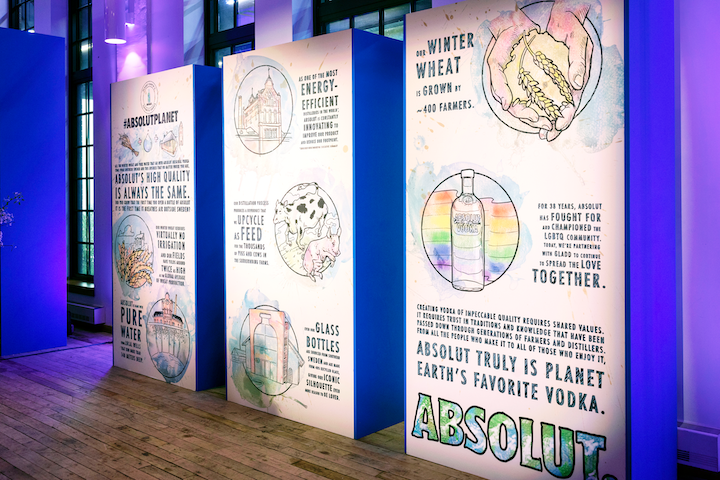 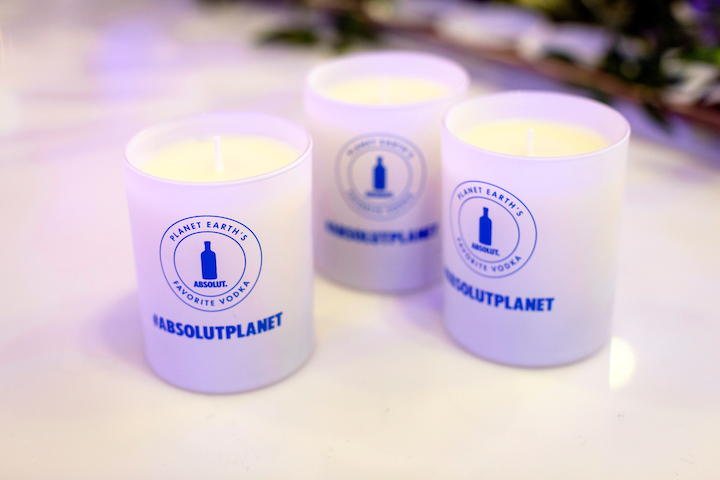