When its in-person convention got canceled, VidCon organizers launched VidCon Now, a free series of online programming. Here's how they did it. 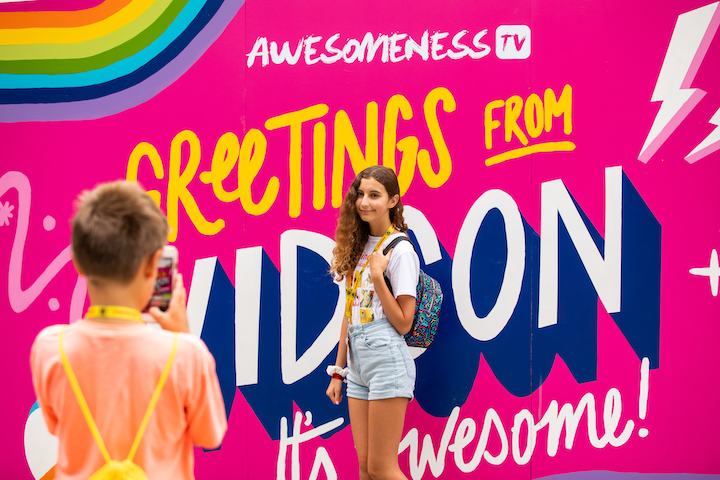 In 2019, VidCon drew some 75,000 attendees to the Anaheim Convention Center. Outside the venue, AwesomenessTV worked with Mirrored Media to create a colorful photo op. See more on last year's event: How VidCon Attracts "the Most Media-Savvy Audience in the World"
Photo: Mirrored Media

ANAHEIM, CALIF.—This week last year, VidCon hosted the 10th anniversary of its U.S.-based convention, drawing more than 75,000 attendees and 120 brands to the Anaheim Convention Center. But this year, things look a bit different.

Like all major events, the live edition of the ViacomCBS-owned show—which bills itself as the world’s largest event for fans, creators, executives, and brands in the online video space—has been canceled, and organizers worked to shift to a virtual environment. The result: VidCon Now, a free series of online programming that launched on June 20 and runs throughout the summer. The ambitious undertaking features a mix of virtual concerts, panels, meet-and-greets, networking opportunities, and much more.

Here, VidCon’s general manager, Jim Louderback, takes BizBash behind-the-scenes on the massive undertaking, sharing his go-to virtual platforms for networking and other event components, why programming was stretched over an entire summer, the ways he thinks virtual events can be more powerful than in-person, lessons he hopes to carry into the future, and much more.

Remember that connecting with your audience is the most important thing.
As it became increasingly clear that a live convention would not be happening, Louderback and his team immediately knew they didn’t want to cancel altogether. He recognized the benefit of the convention’s timing—with a July run date, the team already had some components planned that could be shifted to virtual, and they had the time to do it right. “It was survival in many ways … we didn't want to get into that position where we weren't talking to people for two years,” Louderback explains. “So we said, ‘Look, how do we replicate the experience digitally, in a way that isn't just trying to copy the event format but that incorporates all the things that make the event special—which is the learning, the entertainment, and the connections.”

That desire to connect with the VidCon audience is also why all of the programming is being made available for free. “We don't want to charge people for tickets right now, both because of the economy and because we're learning alongside our audience,” says Louderback. “Down the road, that strategy may change … but right now we’re learning from our audience as much as they’re learning from us.” 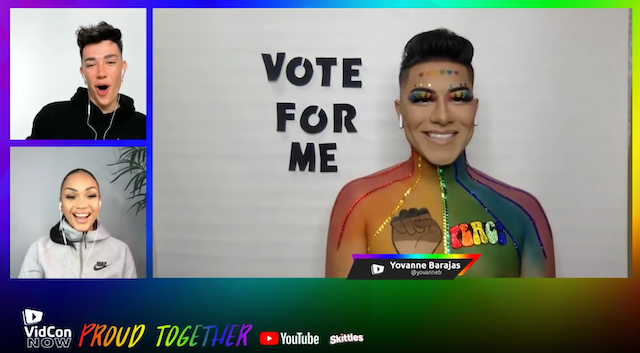 Stretch it out over a longer period of time.
Ultimately, the team realized that hosting virtual events throughout the whole summer—rather than cramming them into the long weekend that had been planned in-person—made the most sense for their needs. Sessions are now taking place Tuesday through Saturday for the rest of the season, with more speakers and programming being announced every two weeks.

Part of this strategy was realizing that VidCon is essentially three events in one, with different tracks for industry professionals, creators, and fans. Stretching the convention out allows a few components for each audience each week, both to avoid the idea of “Zoom fatigue” and to keep excitement and engagement going longer.

Louderback was also cognizant that VidCon’s Gen Z-heavy audience is likely home for the summer, missing their normal activities, and exhausted from a semester of Zoom-based school. “We wanted to find ways to engage them with different, interesting things all summer,” he explains. “So we said, ‘Let's not do 60 things over three days. Let's do a couple things for each of our audiences every week, to make it special and make it something that people will look forward to week in and week out."

Spreading the event out all summer also allows the production team to learn as they go—and to vary the type of experiences offered. Similar to the in-person convention, VidCon Now’s virtual programming includes breakout workshops, keynotes and panels, meet-and-greets, large concerts and performances, and more. “We thought, ‘Let's start with a couple formats to get it out there. And as we get better at it, we'll bring more capabilities into that experience.’ And that's the way it's playing out,” says Louderback.

Go beyond prerecorded content.
While some large conferences and conventions are shifting to digital by leaning on prerecorded content, it was important to Louderback to keep VidCon Now mostly live. “The first thing I said to everybody on the team was, ‘We're not making television. We're not YouTube creators, and we're not television producers,’” he remembers. “We make interesting experiences that people can share. … So we asked ourselves, ‘How do we add additional interactive elements that make it seem like you're in a space with other people, that you're sharing those connections?’” 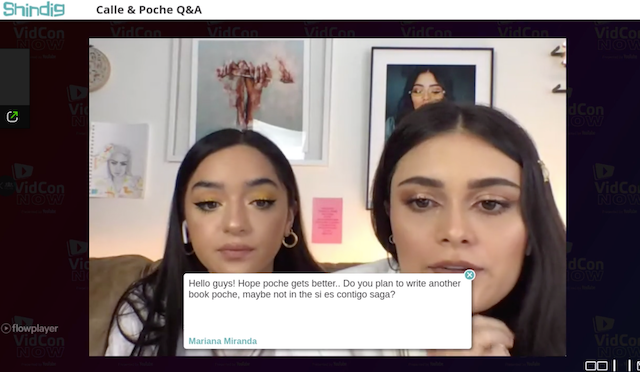 In the first two weeks of programming, fans had the chance to interact with VidCon co-founders John and Hank Green, former Twitter executive Bruce Daisley, creators such as Calle & Poché (pictured), and many more.Screenshot: Courtesy of VidCon Now

Consider a mix of virtual platforms.
While answering that question, the team quickly realized that just one virtual platform would not accomplish everything they needed—so they decided to mix and match. Zoom, for instance, is being used to produce some panels, fireside chats, and Q&As. “We're then taking that Zoom experience and wrapping it in a wrapper from an interactive video platform called Maestro,” explains Louderback. “And so when you go to our website to watch this experience, you have the ability to look at bios and to do Q&As and chat, all these interactive elements that make it better than just a Zoom experience.”

For workshops, meanwhile, the team is using a platform called Shindig. “It actually allows anybody in the workshop to be pulled ‘on stage’ to suddenly have a connection and a discussion with two or three people. … So it becomes more of a smaller group experience for our rooms that are 200 or 250 people.” And for larger concerts and performances, Louderback tapped cloud-based system Stage Ten, which allows the stream to be pushed right to YouTube.

But beyond the panels and performances, Louderback knew that networking is a crucial component of any in-person event. To help recreate those serendipitous connections, VidCon Now has built a community on Discord that allows for text-based discussions, audio and video chats, and even 50-person video sessions between creators and industry leaders. “We’re also opening up some rooms [on Discord] around topics that we know are of interest, and just letting the audience self-aggregate their connections.”

VidCon Now also offers more focused networking events through a partnership with virtual event company Icebreaker. How it works: Organizers prepare 20 questions, and attendees are randomly matched for one-on-one conversations. “It's a little bit like Tinder meets a cocktail party,” laughs Louderback. “If it’s not good, you can leave. If you want to connect more, you can exchange information.” Finally, the team is using a company called Chatalyze to recreate the convention’s meet-and-greets. Fans get a one-minute video chat with their favorite creator; the program can even take screenshots for selfie-style keepsakes.

While acknowledging that the platforms are not the same as a face-to-face event, Louderback notes that there are certain benefits to the virtual environment—and it goes beyond just bringing in attendees from all over the world. “If you’re at an event and there are little pockets of people who know each other, sometimes it can be hard to break the ice,” he points out. “A program like Icebreaker is great because we can actually force people to connect, to talk about something we know they’re interested in. So there’s actually an ability to make stronger connections than you might see in person.” 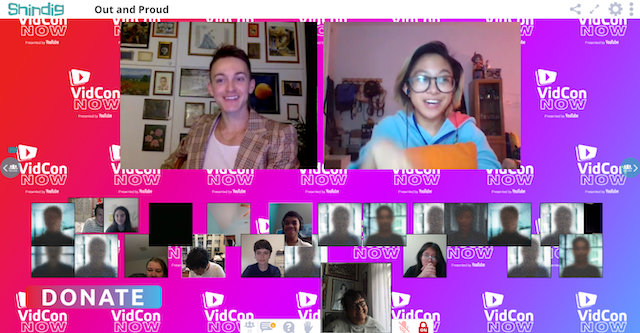 Organizers are using the platform Shindig for workshops, which allows various attendees to be pulled “on stage” for discussions.Screenshot: Courtesy of VidCon

Recognize that you can’t recreate everything.
One aspect of VidCon that Louderback’s team has not been able to recreate is the photo op-heavy expo hall, where brands are known for building elaborate, immersive activations and booths. Instead, VidCon Now's sponsors are finding new ways to get their names and products in front of attendees. Some are sponsoring tentpole performances, while others are sponsoring various sessions. “It's more of a ‘getting your name in front of people and being a part of the conversation’ approach, versus having a space where the sponsor creates their own experience,” Louderback explains.

And that’s OK, he adds. “If you're trying to just replicate everything, then you should just be doing a face-to-face event. Our path was, what can we take and build digitally in a way that delivers a similar experience that’s interactive, that creates a connection.”

Of course, Louderback isn’t closing the door to the idea of a virtual expo hall in the future. “I used to say there was no way to do a virtual meet-and-greet, and then we found a great piece of software to do it,” he says. “So I'm glad I was wrong. We’re experimenting and trying new things as we go.”

Brainstorm takeaways for the future.
Louderback is optimistic that VidCon 2021 will take place in person—but he recognizes that many of these digital components will still be in place for a variety of reasons. “Some people won’t be able to attend because of distance, or for money reasons based on what’s happening with the economy, or for health reasons,” he points out. “When we do events next year, we’re going to need a digital component that brings people in.”

Louderback notes that he’s viewing this summer as a sort of a “Petri dish” where the team expands their knowledge and figures out best practices. “I've run media businesses through the last couple of [economic] downturns—and in each of those cases, if you look at it as an opportunity to expand your business, to change, and to learn, when you get on the other side, you're uniquely positioned to be even more dominant and take in more market share—because you didn’t just sit in the corner and lick your wounds,” he says. “That's really the mindset we're taking.”

Louderback also notes that VidCon’s parent company, ViacomCBS—which bought the convention in 2018—is taking a similar approach by hosting virtual concerts, upfronts, and even award shows through its ViacomCBS Live Experiential division. “There’s really this mindset of, ‘Let's not just go away and sit in the corner for a year, and then come back and do what we’ve always done,” he explains. “Let's build new ways of thinking about how we engage people, and the reasons why people came face-to-face in the first place.” 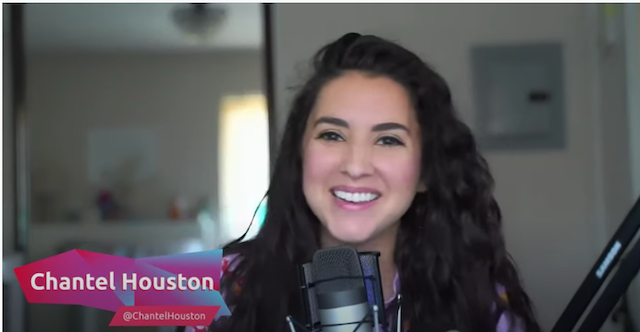 Additional past speakers have included creator Chantel Houston (pictured). VidCon Now is announcing new programming every two weeks this summer; sessions this week include a Q&A with film producer Adam Waheed and a workshop on gathering TikTok followers.Screenshot: Courtesy of VidCon 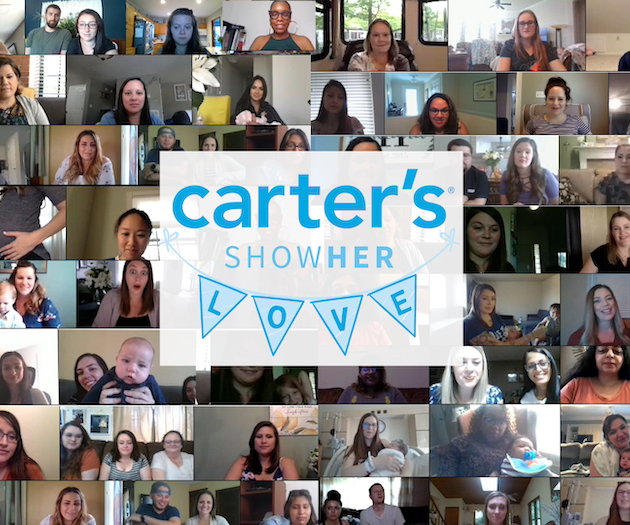 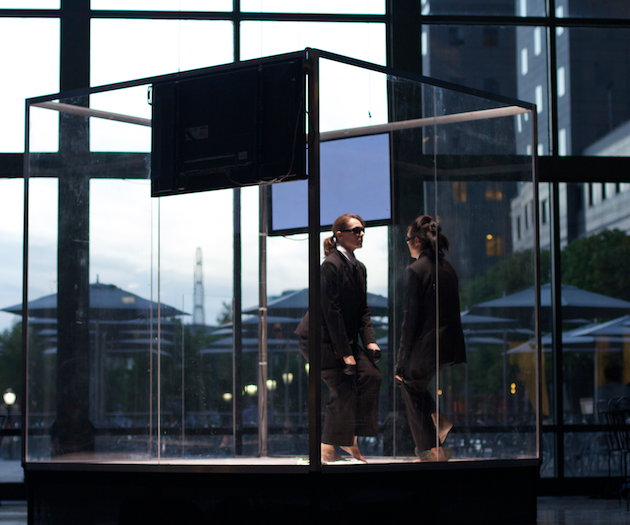 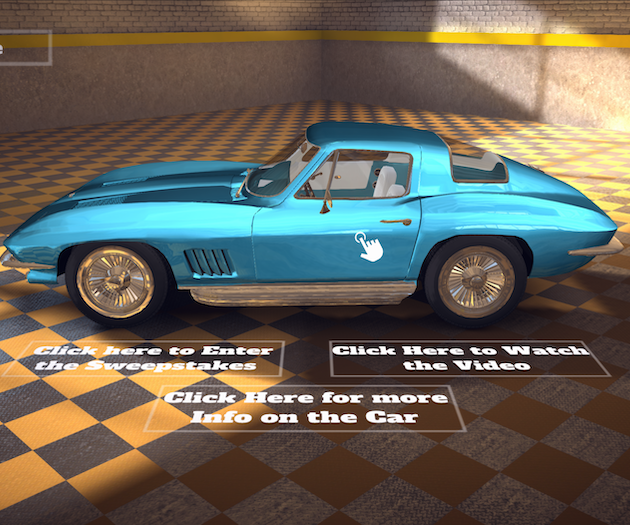 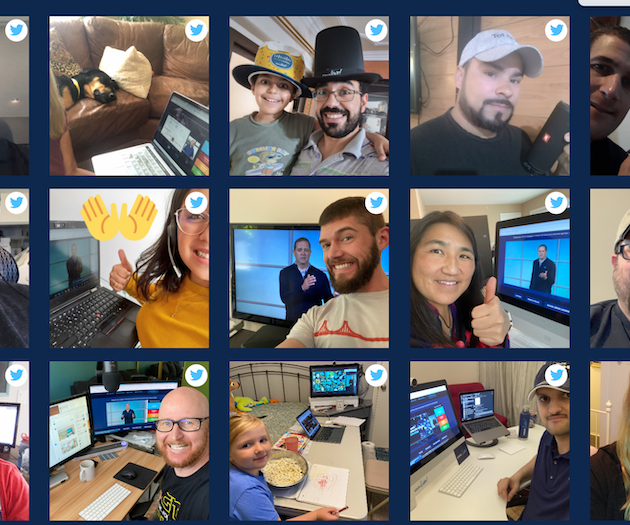 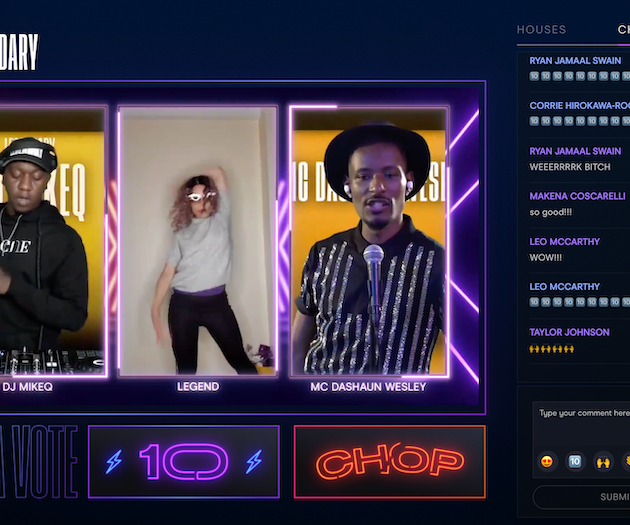