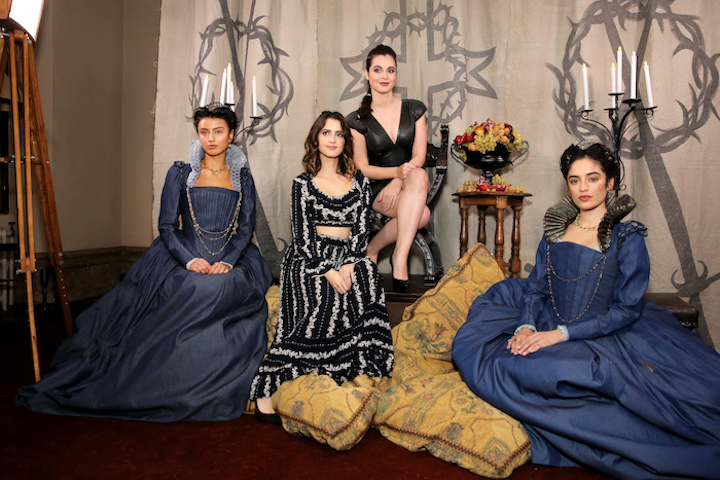 On December 6, Vanity Fair and Focus Features hosted a cocktail reception to celebrate the new historical drama Mary Queen of Scots. Held at Chateau Marmont, the event featured a costume display from the film, and guests could pose in a themed vignette with costumed actors. The event was produced by Mitie Tucker Event Production.
Photo: Rachel Murray/Getty Images for Vanity Fair

Moves & Milestones
Showtime Networks has named Hulu and Fox Searchlight veteran Deva Kehoe senior vice president of talent relations and events. Deadline: "Based in Los Angeles, Kehoe will oversee the teams responsible for working with the network’s talent and producing nationwide events for Showtime Networks and its original series, sports, documentaries, and specials—including all premieres and screenings nationwide, events at festivals, corporate and trade-related events, and For Your Consideration events during awards season." https://bit.ly/2Qnb6Ca

Megan Cecil has launched a new communications firm, Scenario. She previously worked as an account executive at BWR Public Relations.

In Case You Missed It
We took a look inside the Los Angeles edition of Refinery29's 29Rooms, discovering how the massively popular art exhibit featured more opportunities to connect with strangers, interact with art, and spark creativity.

In the News
Actress Megan Mullally will host the 25th annual SAG Awards, taking place January 27 at the Shrine Auditorium. The Hollywood Reporter: "The Will & Grace star will emcee the 25th annual ceremony.... She will follow in Kristen Bell's footsteps, who became the awards show's first-ever host earlier this year." https://bit.ly/2rCdciV

L.A. city councilman Paul Koretz hopes to require the city's public venues to serve vegan options. LAist: "The ordinance would require some private spaces like large-scale entertainment venues, movie theaters, and sports stadiums to offer at least one 'vegan protein entree food option.' It would also require L.A. World Airports, which operates LAX, to study the feasibility of putting a vegan restaurant in every terminal." https://bit.ly/2BiL7Bs

Destination Crenshaw, a 1.3-mile-long outdoor museum celebrating black culture in Los Angeles, is expected to open in early 2020. Curbed: "Designed by Perkins & Will, the project would run along Crenshaw Boulevard between 48th and 60th streets, and feature permanent and rotating works of public art as well as streetscape upgrades with landscape design by Studio-MLA. ... The outdoor art gallery will include a new public amphitheater with a raised overlook, 11 new pocket parks and parklets that will be built and outfitted with art as a part of the project, and hundreds of new trees." https://bit.ly/2LefMES

Surprise Event Metric of the Week
1,300 = the number of pounds of spiced cookie dough and sugar that make up JW Marriott Los Angeles at L.A. Live's life-size gingerbread bar. Dubbed Santa's Tavern, the festive lobby pop-up serves holiday refreshments such as the Naughty or Spice cinnamon and chai martini.

Venue Buzz
Slated to open next Wednesday is Margot, a new restaurant from IB Hospitality that serves Spanish and Italian cuisine. The rooftop space, located atop the Culver City Platform development, seats 70 in the indoor lounge and bar area, plus 80 on the patio and an additional 20 in an outdoor lounge. Design by Thomas Schoos and Lisa Gill incorporates hand-painted graphics, vintage chandeliers, a glass-enclosed wine cellar, and a custom photo booth.

Overheard
“It was a subdued intimate dinner club for the Hollywood elite. You’d say hello to all your friends at one table, then go on to the next. It was a movable dining experience.”

—Actress Ellen Barkin, describing actress and belly dancer Helena Kallianiotes's infamous members-only club of the 1980s. The Hollywood Reporter has an in-depth look at the celebrity haunt, sharing how seating assignments were chosen, how a no-camera rule was enforced, and what happened when Jack Nicholson rented a baby elephant for Anjelica Huston's birthday party.

What's Next
'Tis the season for holiday pop-ups with a number of stylish new bars transforming with holiday decor and festive drinks. Some standouts include Ever Bar at the Kimpton Everly, which is now a retro-inspired winter wonderland offering 12 new themed cocktails; Here & Now, which has a snow machine and its own "bad Santa"; and the NoMad Los Angeles, with drinks served in snow globes and other festive touches. Time Out rounds up a few more options here.