Keep the creative juices flowing with a work-from-home lunch break that includes one of these movies boasting event inspiration. 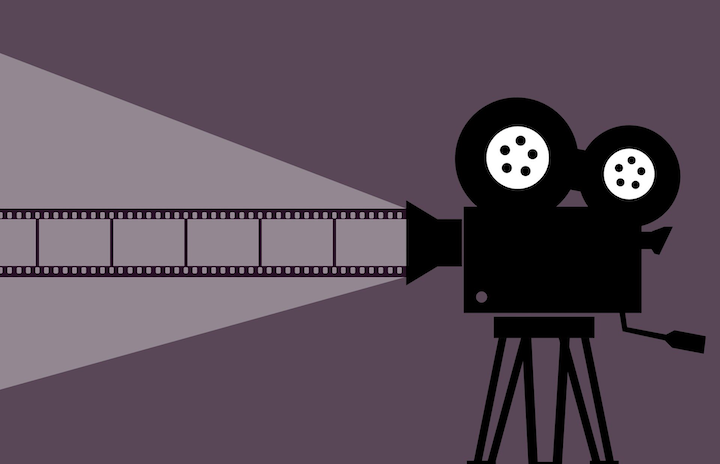 For many event professionals and creatives right now, social distancing policies and governmental "stay at home" orders have inspiration levels running a little low. Enter good 'ole, reliable, grab-the-popcorn type of movies. From themed events and galas to weddings and more—across genres such as romantic comedy, thriller, and fantasy, to name a few—these films offer up a bevy of event design ideas to keep creatives thinking outside of the box for when (yes, when!) events are back up and running post-coronavirus outbreak.

How to Lose a Guy in 10 Days (2003)
From the live entertainment (which, as we know, gets hijacked by Kate Hudson and Matthew McConaughey) to the abounding floral arrangements, jewelry station, and more, the film's corporate gala scene—along with Hudson's yellow satin gown—remains iconic.

Sabrina (1995)
In this remake of the 1954 film starring Audrey Hepburn, twinkling lights strung about, a string quartet, and an open dance floor make up a few of the steal-worthy elements of the movie's indoor/outdoor gala.

Ocean's 8 (2018)
Aside from flaunting a female-driven cast made up of award-winning powerhouses Sandra Bullock, Anne Hathaway, and Cate Blanchett, among others, this film favors those looking for over-the-top design inspiration (especially for an elegant tablescape) and a good laugh to boot.

Meet Joe Black (1998)
Featuring a multimillion-dollar birthday gala, this '90s movie primes event professionals with inspiration for an outdoor fete—from the lighting and fountains to the stage area and more.

13 Going on 30 (2004)
In addition to being a lesson in how to save an event that's not as lively as envisioned, the Girls Night Out event hosted in partnership between the film's fictional Poise magazine and Bloomingdale's offers inspiration on colorful lighting, oversize displays (spot the perfume and diamond ring sculptures in the background), and what not to let your DJ play.

Dumb and Dumber (1994)
Who knew this movie was more than a classic '90s comedy? Take, for example, the film's Snow Owl Benefit scene, which spotlights the ceremony's stage decor—as well as Jim Carrey and Jeff Daniels's bright orange and blue suits, respectively.

She's the Man (2006)
Planning a fund-raising carnival event? Take a tip from this film that's a modern inspiration of the Shakespeare play Twelfth Night.  As Amanda Bynes's character runs through the fair, viewers can spot bouncy castles, a Ferris wheel, classic boardwalk games, and more.

Fifty Shades Darker (2017)
Before you question why this movie made it on the list, here are a few noteworthy elements spotted during the film's Masked Ball scene: fire baton twirlers, masked jesters, an elaborate entrance made up of regals statues and drawn, red-velvet curtains, live entertainment, and more.

The First Monday in May (2016)
Centered around the Met Gala, a premier event that needs no introduction, this documentary follows Vogue editor in chief Anna Wintour and Met Gala chair Andrew Bolton for a close look at the fashionable affair.

The Devil Wears Prada (2006)
In this fashion-forward film, viewers get a glimpse of Paris Fashion Week runway shows, as well as a black-tie gala where Andy Sachs (played by Anne Hathaway) shows off her skills to Runway magazine editor in chief Miranda Priestly, iconically played by Meryl Streep.

Zoolander (2001) & Zoolander 2 (2016)
Although unconventional, these two films go hand-in-hand for inspiration on a fashion show event.

Don't Tell Mom the Babysitter's Dead (1991)
Culminating in a backyard fashion show, this '90s comedy offers a unique approach to the typical runway show, with a catwalk constructed above a pool.

The Big Short (2015)
Featuring a cast of Christian Bale, Steve Carell, Ryan Gosling, and Brad Pitt, this film—which is a dramatic retelling of America's 2008 recession—is fit for financial event planners, with a financial conference of special note in the movie.

Up in the Air (2009)
From conferences to conventions—including a capturing speech by George Clooney (who plays Ryan Bingham)—this movie is a must for event pros with an affinity for conferences.

Jerry Maguire (1996)
Though a now-classic romance movie, this film starring Tom Cruise kicks off with Cruise at the fictional company's annual business conference.

The Great Gatsby (2013)
When planning a 1920s-inspired event, this film is a no-brainer for inspiration, with feather-clad dancers, oversize bubble-inspired balloons throughout the indoor/outdoor spaces, casino games, and champagne galore.

Office Christmas Party (2016)
For a holiday-theme event, this comedy featuring Jennifer Aniston and Jason Bateman offers up ample event design inspiration, including a light-up dance floor, oversize snowflakes, and more. (Though we suggest skipping the idea of sledding down stairs—for liability reasons, of course.)

The Greatest Showman (2017)
When executing a circus- or carnival-theme event, this musical provides ample inspiration, from what acts to include to costume design for consideration.

Harry Potter and the Goblet of Fire (2005)
In J.K. Rowling's novel brought to life, this film offers event design inspiration for both a winter-theme event (pay special attention to the Yule Ball scene) as well as a fantasy-theme affair.

Sex and the City (2008)
Though not from the actual ceremony, this film's wedding inspiration comes from Carrie Bradshaw's photo shoot for Vogue magazine, featuring lush blooms, colorful and antiquated furniture, and more.

Bridesmaids (2011)
In this romantic comedy, an outdoor ceremony features the wedding party standing atop water via stone blocks—with the wedded couple's names glowing through the fountain water.

27 Dresses (2008)
From oceanside nuptials and themed ceremonies to a rehearsal dinner and beyond, this film starring Katherine Heigl packs 27 weddings worth of inspiration in one movie.

Wedding Crashers (2005)
In this movie, wedding planners can spot more inspiration for a traditional ceremony, including a clean green and white color scheme.

Father of the Bride (1991)
For aisle inspiration, this oldie-but-a-goodie film flaunts an aisle lined with oversize floral arrangements complemented by lit taper candles.

The Twilight Saga: Breaking Dawn – Part 1 (2011)
Planners with a love for fantasy films will revel in this movie's outdoor wedding scene that's overflowing with floral inspiration, from the soft-white wisteria hanging above guests to the seating made up of intertwined florals and tree branches.

The Wedding Planner (2001)
A movie that inspired many event professionals to follow a career in wedding planning, this rom-com is chock-full of inspiration for wedding decor—not to mention tips for the planner.

The Wedding Singer (1998)
Featuring Adam Sandler and Drew Barrymore, this feel-good movie offers inspiration for an outdoor ceremony, including an intricate backdrop. 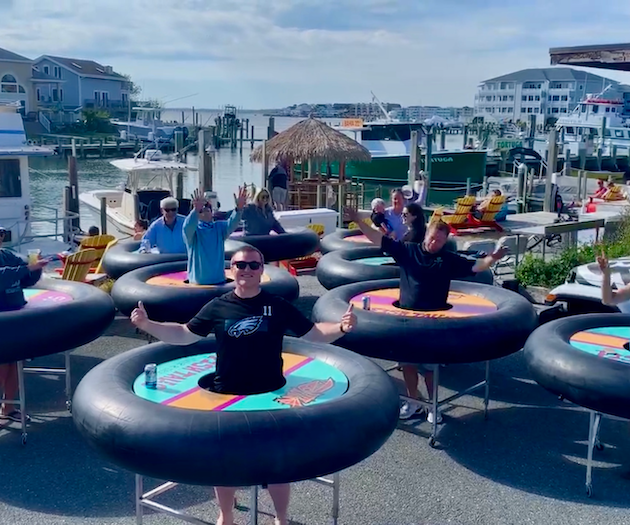 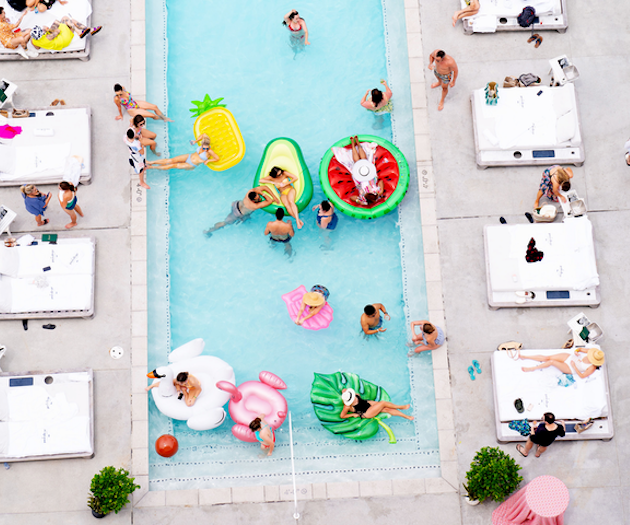 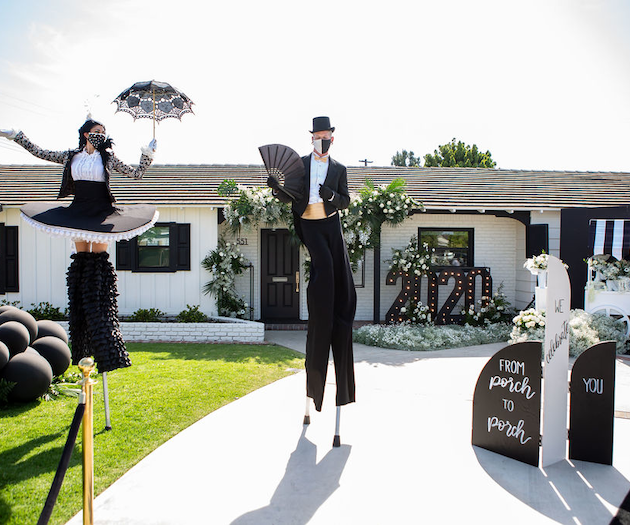 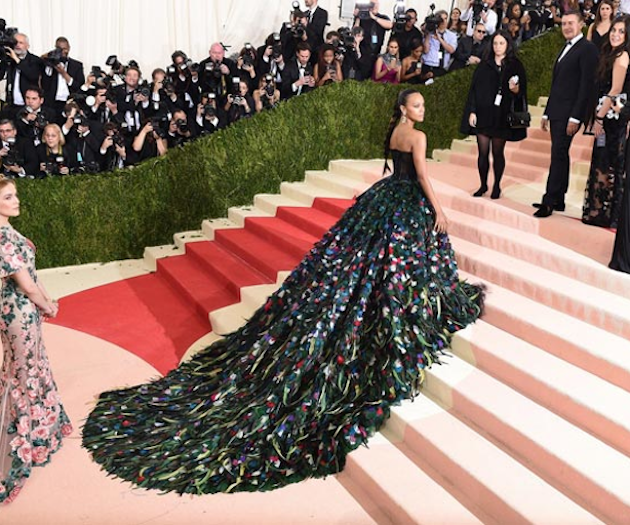 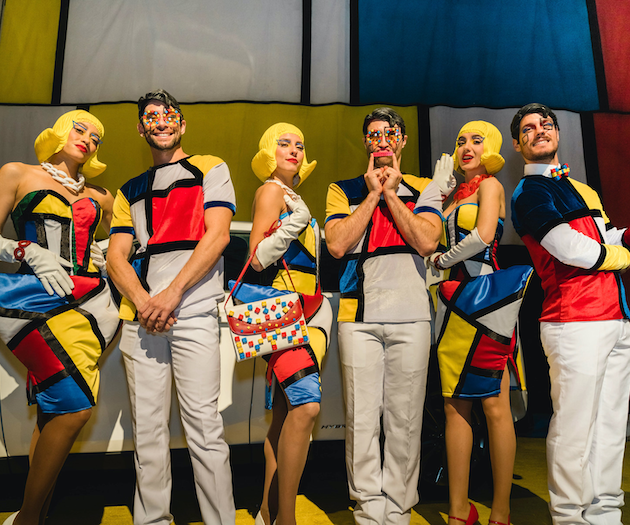 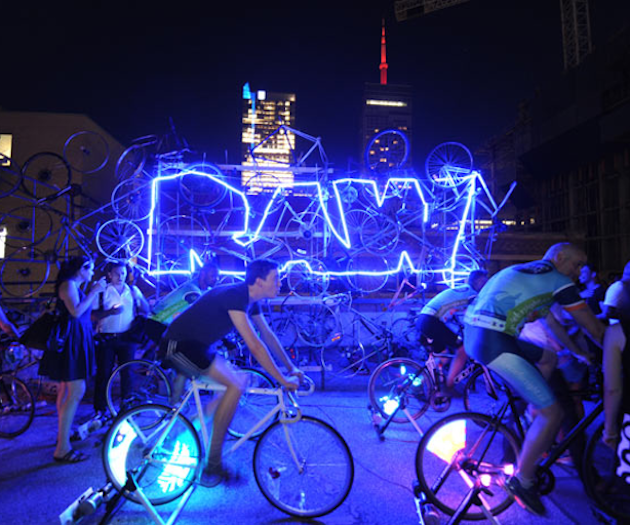 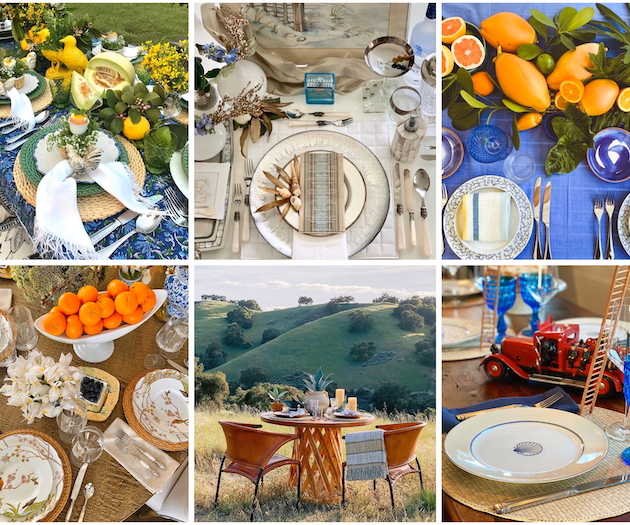 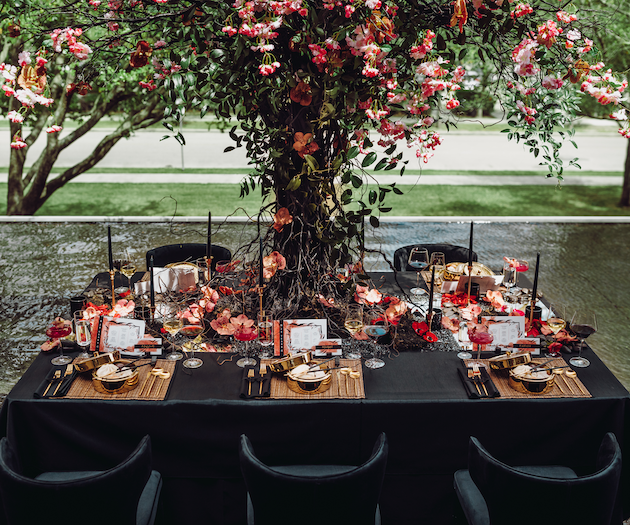 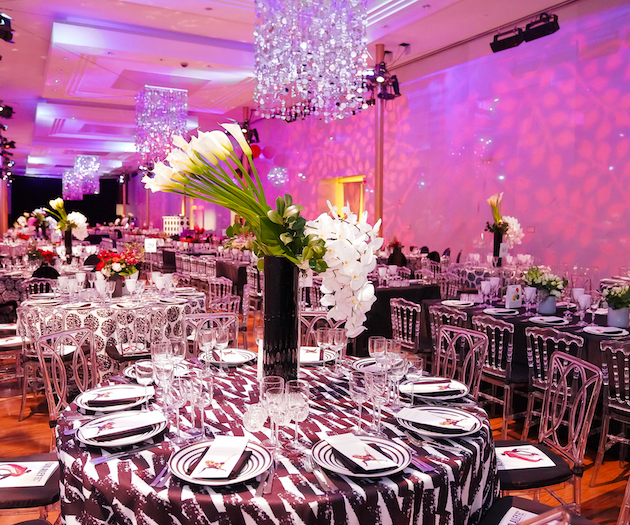 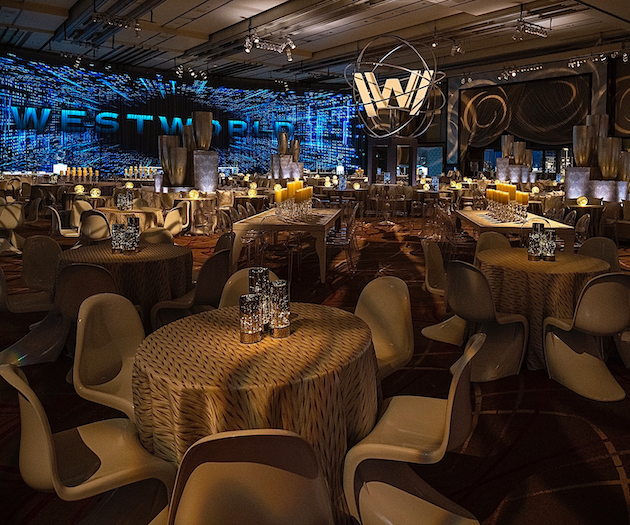 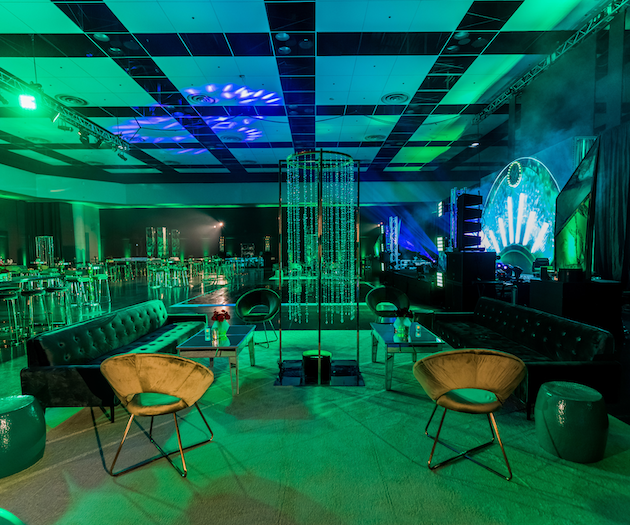 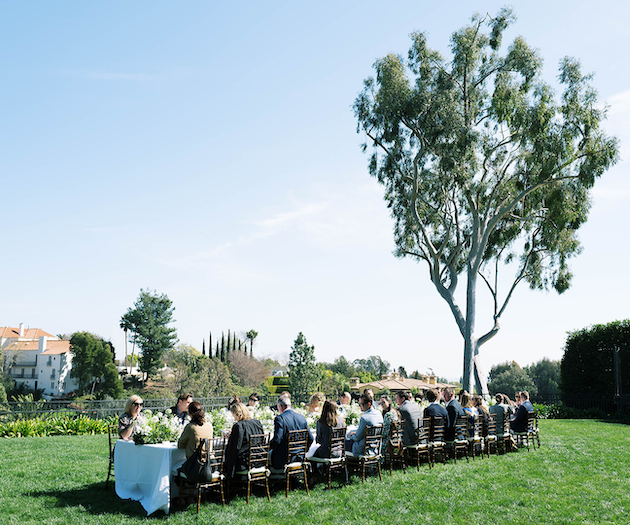 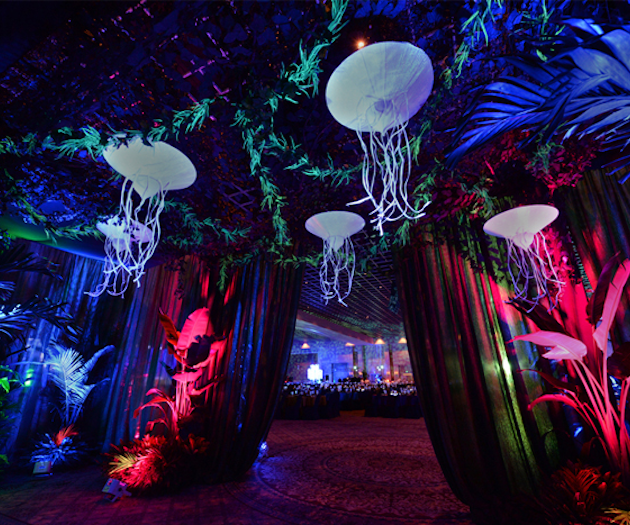 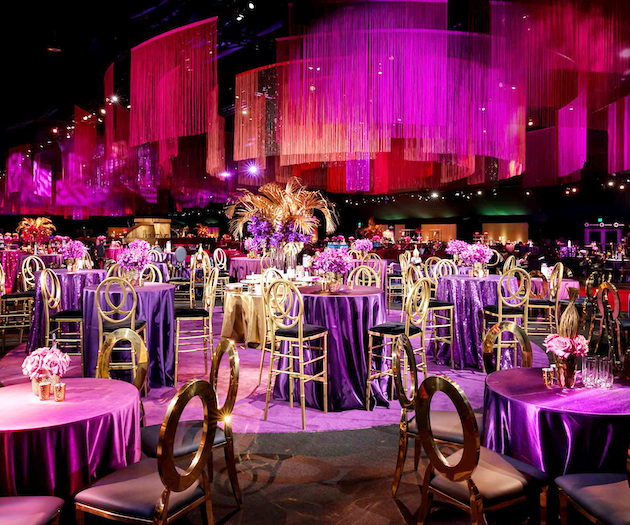