As the weather warms and events move outdoors, here are some fresh decor, catering, and entertainment ideas to try this spring.

It's officially spring, and while it may not feel like it in some parts of the country, the season of outdoor events is on its way. For inspiration, here's a look at a gathering that actually happened last fall, the First Look Party, designed by Todd Events.

More than 500 guests attended the circus-theme First Look Party, so named because guests can preview the art to be auctioned that weekend at the Two by Two for AIDS and Art Gala, which benefits Amfar and the Dallas Museum of Art. It took place in October behind the Rachofsky House, a private home. The event had many classic circus tropes—elephants, games, a fortune-teller—but integrated sponsors into the fun with games such as a ring toss that used Belvedere vodka bottles.

Todd Fiscus, owner and chief creative officer at Todd Events, said he designed the event to have a "whimsical and fun" feel, with elements such as a carousel that had models wearing latex horse heads instead of horses. Their arms were covered in colorful samples from presenting sponsor Michele Watches.

Another creative idea was the photo station. The property's footprint is more than three feet off of the grass, so Fiscus had room to install a trampoline with a custom deck and backdrop surrounding it. Guests jumped on the trampoline while the photographer captured the action shots.

Check out some of the best ideas from the Dallas event. 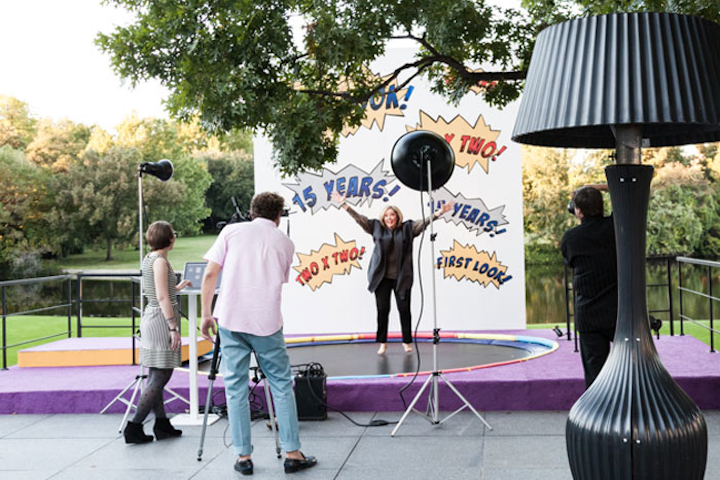 In a new take on the traditional photo backdrop, guests bounced on a trampoline before having their photo taken. Side rails around the custom station kept guests safe.
Photo: Roderick Peña 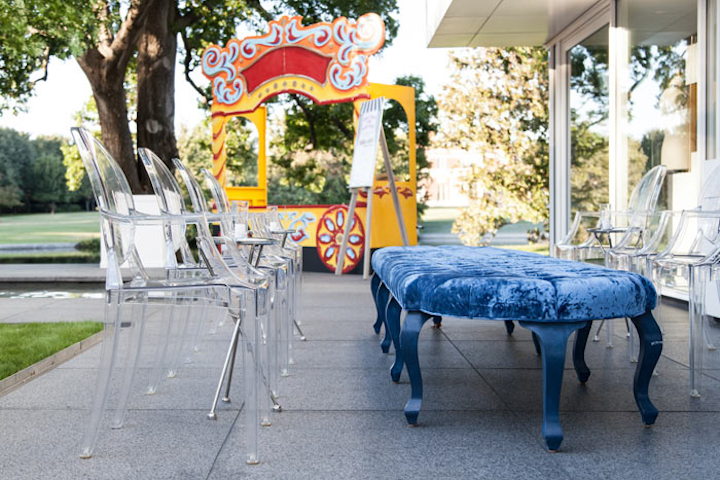 Blue velvet Louis XVI ottomans offered a pop of color and a luxurious seating option among the eclectic furnishings. "I wanted this one to feel a little haphazard," said Todd Events owner and chief creative officer Todd Fiscus, who designed the event. He said he chose elements that were "whimsical and fun."
Photo: Roderick Peña 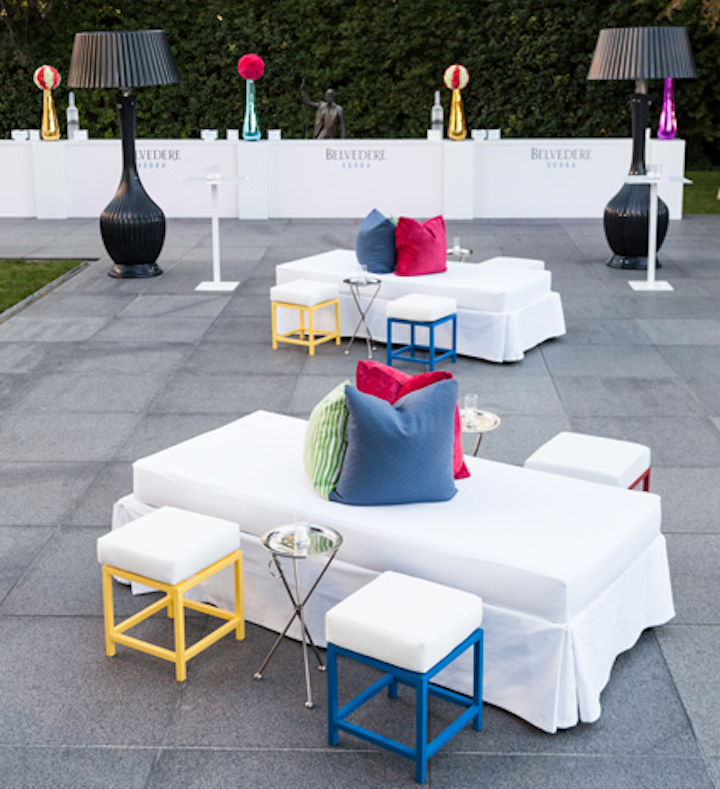 The reception-style event did not have sit-down tables, so Todd Events provided some casual low furniture for guests who wanted a seat. Oversize black heat lamps were both decorative and practical.
Photo: Roderick Peña 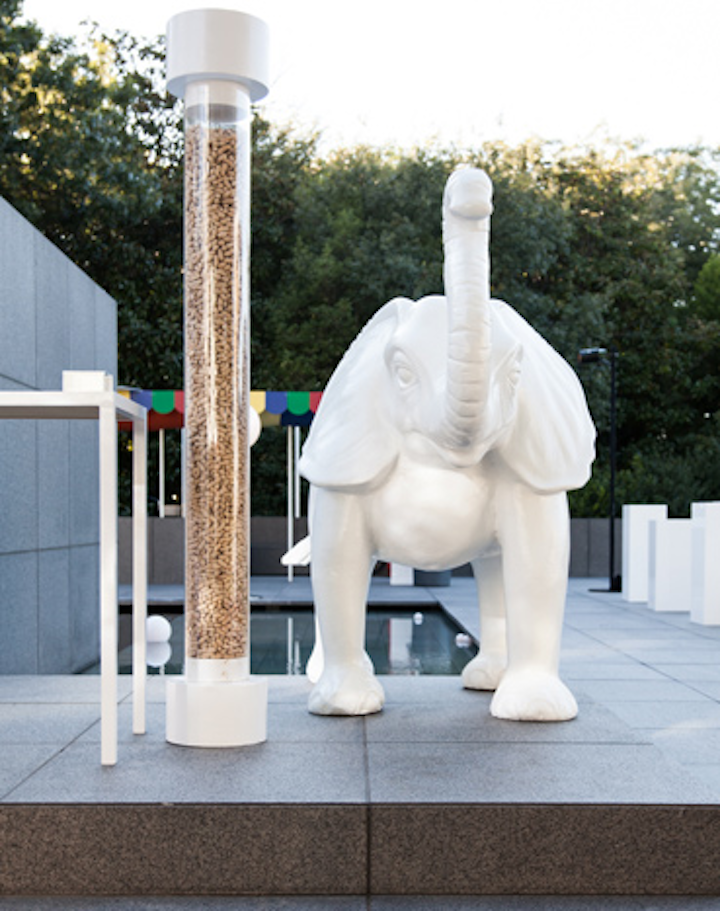 One of the games asked guests to estimate the number of peanuts in an eight-foot-tall tube (answer: about 73,000). Two fabricated elephants flanked the tube.
Photo: Roderick Peña 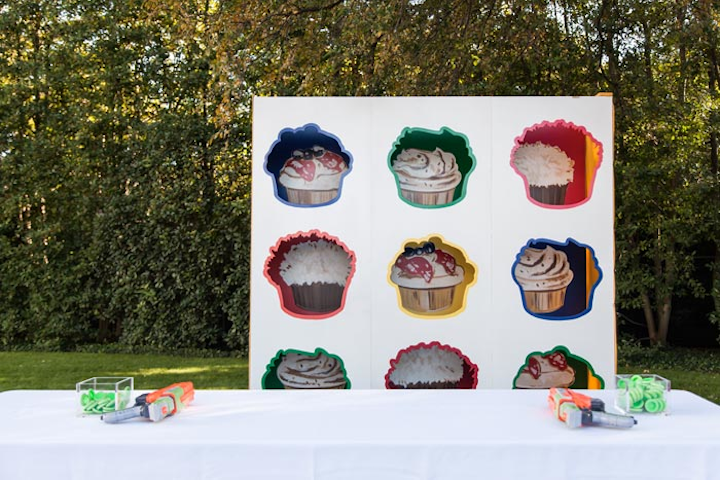 Guests had to win their dessert—a Sprinkles cupcake—by shooting a toy dart gun into the cupcake cutouts.
Photo: Roderick Peña 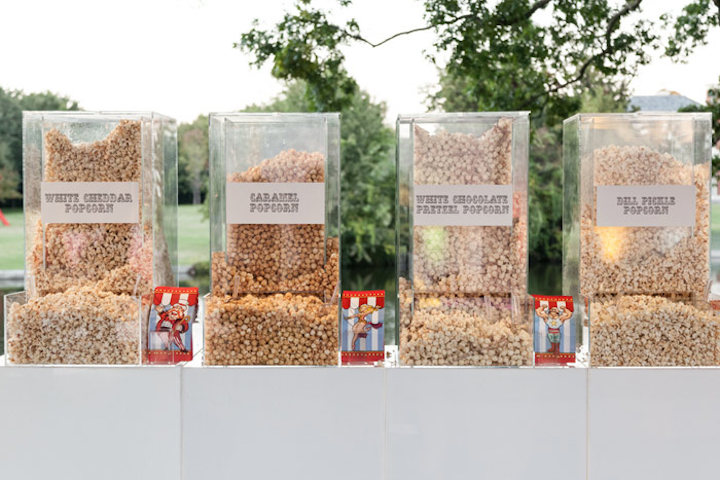 At a flavored popcorn station, custom-built stands had a false fill at the top so they never appeared empty. Serving staff refilled the popcorn at the base as needed.
Photo: Roderick Peña 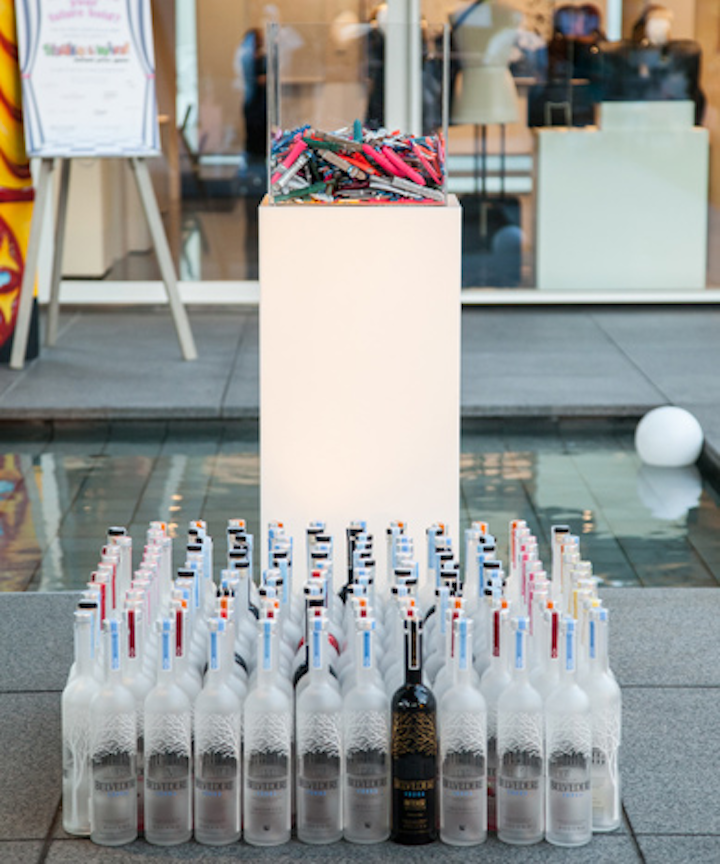 Bottles from sponsor Belvedere were used in the ring toss. Winners received a band from Michele Watches.
Photo: Roderick Peña 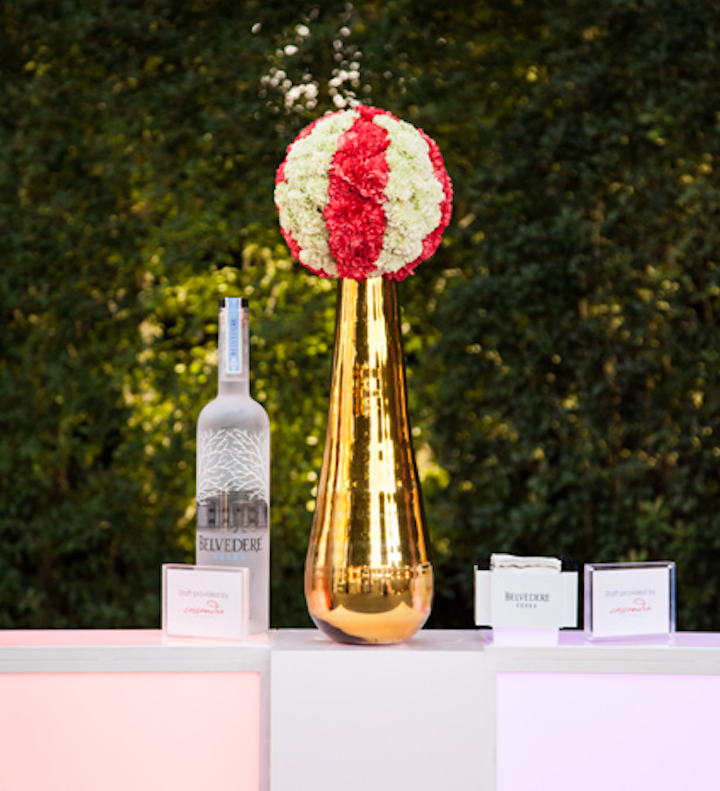 Florals at the event included a ball of carnations that evoked the classic image of a circus elephant standing on a ball.
Photo: Roderick Peña 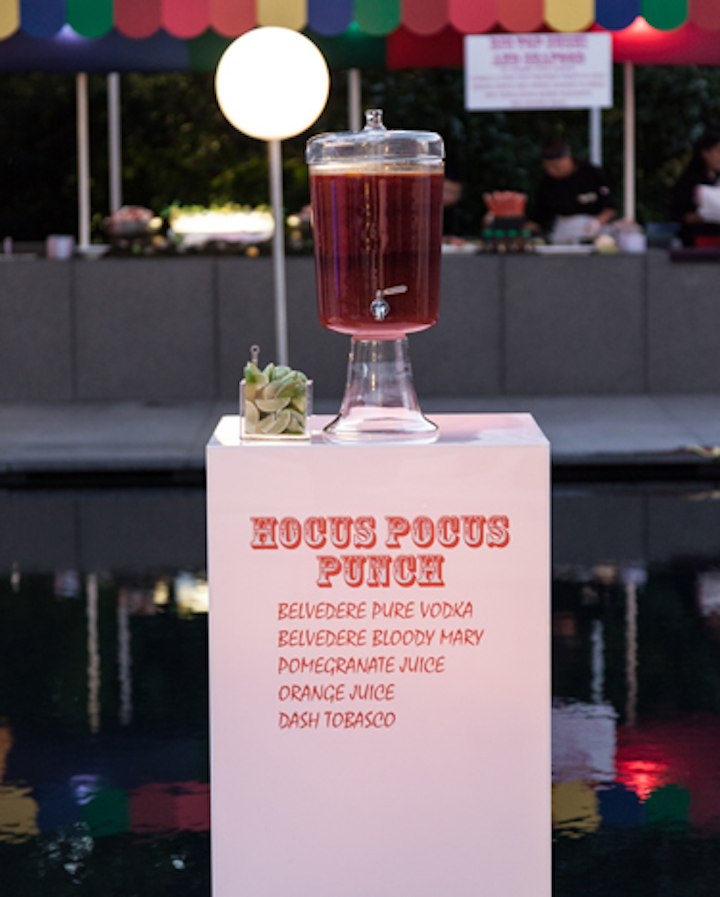 Several featured cocktails were served atop white glass columns that were lit underneath with LED lights. The ingredients were printed on the front of the columns, and the napkins had the exact recipe.
Photo: Roderick Peña 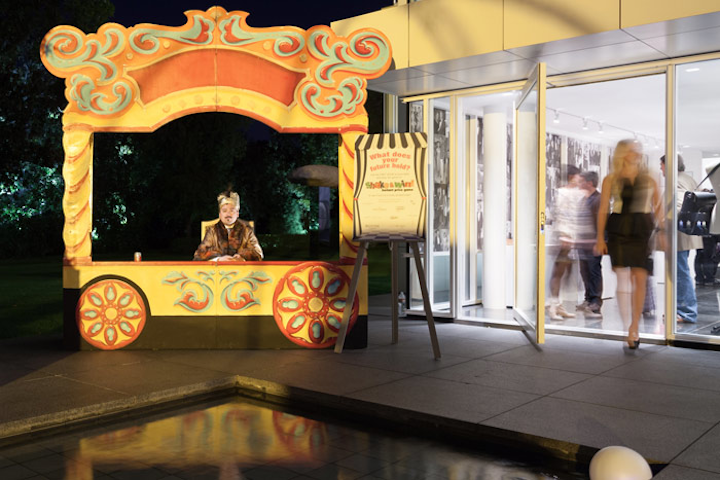 A fortune teller offered sartorial advice such as how guests could upgrade their outfits at sponsor Neiman Marcus.
Photo: Roderick Peña 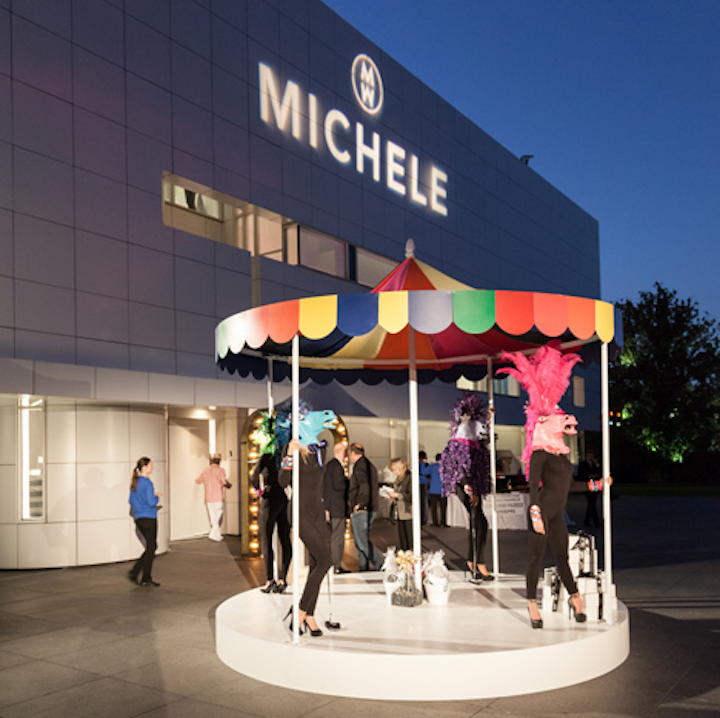 Instead of typical carousel horses, the First Look Party had mannequins who wore several watches on their arms—as well as latex horse heads.
Photo: Roderick Peña 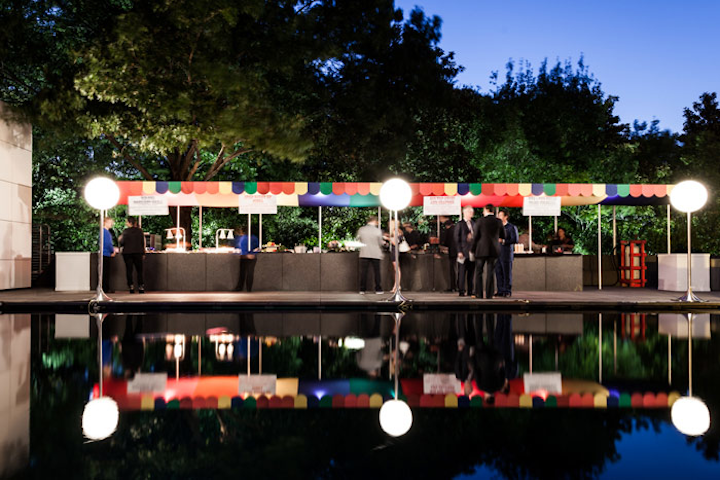