Careful to avoid clichés, there was little, if any, sign of red and gold to be had at this year’s Costume Institute gala at the Metropolitan Museum of Art, which celebrated all things Chinese with the exhibit “China: Through the Looking Glass.” Indeed, the respectful homage to the Far East relied on a soft palette of mainly pinks and blues, featured on everything from centerpieces to the stage curtain to even the Michael Kors-designed uniforms worn by ushers.

“Anna said, ‘Do China, but not too literally,’” said benefit producer Raul Avila in reference to the edict on decor provided by Vogue editor in chief Anna Wintour. Wintour was the event's co-chair (her 17th time) alongside actresses Jennifer Lawrence and Gong Li, philanthropist and film producer Wendi Murdoch, and Yahoo C.E.O. Marissa Mayer, whose tech firm served as the evening’s sponsor. Business magnate Silas Chou served as honorary chair.

Vogue's director of special projects, Sylvana Ward Durrett, oversaw the planning of the benefit, which raised more than $12.5 million, working with the Metropolitan Museum of Art’s in-house staff, including vice president for institutional advancement Nina Diefenbach, deputy chief development officer for events Kristin MacDonald, and deputy chief special events officer Bronwyn Keenan. Decor for the event was created by 59 Productions and Avila, who has worked on the gala for nine consecutive years.

Two years in the making, this year’s exhibit, according to the museum's director and chief executive officer, Thomas P. Campbell, is “probably the largest exhibition we’ve ever undertaken at the Met." Initial conversations on how to celebrate the museum’s department of Asian Art’s centennial blossomed into becoming the focal point of the Costume Institute exhibit. The exhibit, which opened to the public on May 7, spans all the Chinese galleries at the Met—a total of 30,000 square feet, or three times the size of a typical show.

As guests, including Beyoncé, Reese Witherspoon, Lady Gaga, Jennifer Lopez, and Sarah Jessica Parker entered the museum on the evening of May 4, they were met by a 30-foot-tall porcelain vase replicated entirely in white and blue roses. The impressive floral installation was in keeping with aesthetic motifs from centuries of Chinese art that inspired other decor elements. From there, and up the Great Hall staircase flanked by 6,000 bamboo stems, an inaugural viewing of the exhibition was had. Cocktails followed at the Temple of Dendur in the Sackler Wing, where a giant full moon was projected onto the back wall, a dozen planted cherry trees were in full bloom, and a female quartet played “In the Mood for Love.”

At 8:30 p.m., the 640 guests sat for dinner in the American Wing's Charles Engelhard Court, which Avila had transformed using some 200,000 stems of wisteria to visually lower the ceiling of the space. Central Park-facing windows were covered in de Gournay hand-painted wallpaper created by traditional Chinese artists, while the northern bank façade was covered in sheer de Gournay curtains.

Dinner tables covered with de Gournay tablecloths featured centerpieces of red peonies in blue and white porcelain vases and chargers holding gold-rimmed plates. In a nod to this year’s ode to China, chopsticks were placed at each setting and, for those auspicious of unlucky numbers, table number four was omitted from the seating chart.

Following dessert, which consisted of gilded pomegranate filled with pomegranate ice cream alongside fortune cookies, coffee, and Chinese teas, Rihanna emerged from behind an 80- by 30-foot de Gournay curtain. To create a scaled-down runway for her performance, staffers quickly cleared the center orchestra dinner table, removing all stemware in a matter of minutes.

Overall, it took Avila and his team one week to set up and five full days to break down. “It was more labor-intensive than in past years because of the theme,” said Avila. “We didn’t want to be cliché yet wanted to do something people would understand. We had to be more conscientious of color choices than ever.”

Following the gala, a quartet of after parties ensued throughout the city: Yahoo hosted the official after-party at Top of the Standard (also known as the Boom Boom Room) in the meatpacking district, while Michael Kors held court at the Mark Hotel on the Upper East Side, Lady Gaga and Alexander Wang took over the Diamond Horseshoe in Midtown, and Rihanna commandeered the Up & Down nightclub in Chelsea. 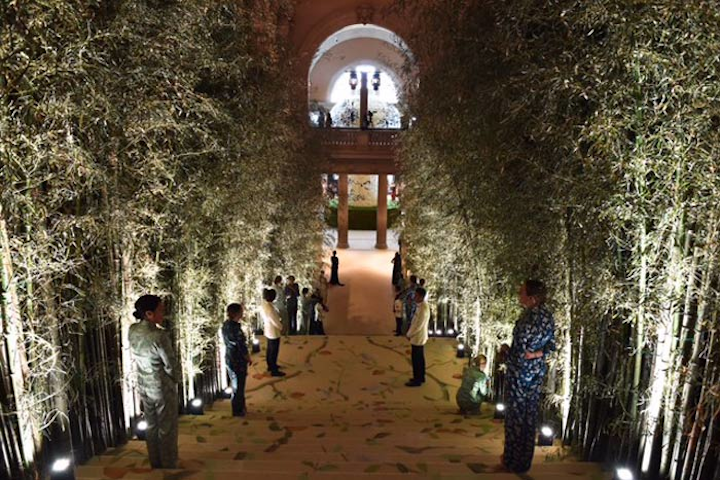 A forest of 6,000 bamboo stems shipped in from Hawaii and Puerto Rico, and ranging between 14 and 25 feet tall, flanked the Great Hall staircase leading up to dinner. It took design director Raul Avila's team one entire day to properly position each stem alongside the custom-laid sisal, the bird, floral, and cherry blossom motif of which was painted by hand. Greeters positioned on the staircase were dressed in custom Michael Kors-designed "Mandarin Evening" silk pajama shirt and pant ensembles, which the designer has reissued for a limited time for $1,190 on his website. Vogue creative director Grace Coddington, who missed the dinner this year due to a flight to France and stayed only for cocktails, walked the red carpet in the pajama set—which she wore straight to the airport.
Photo: BFA 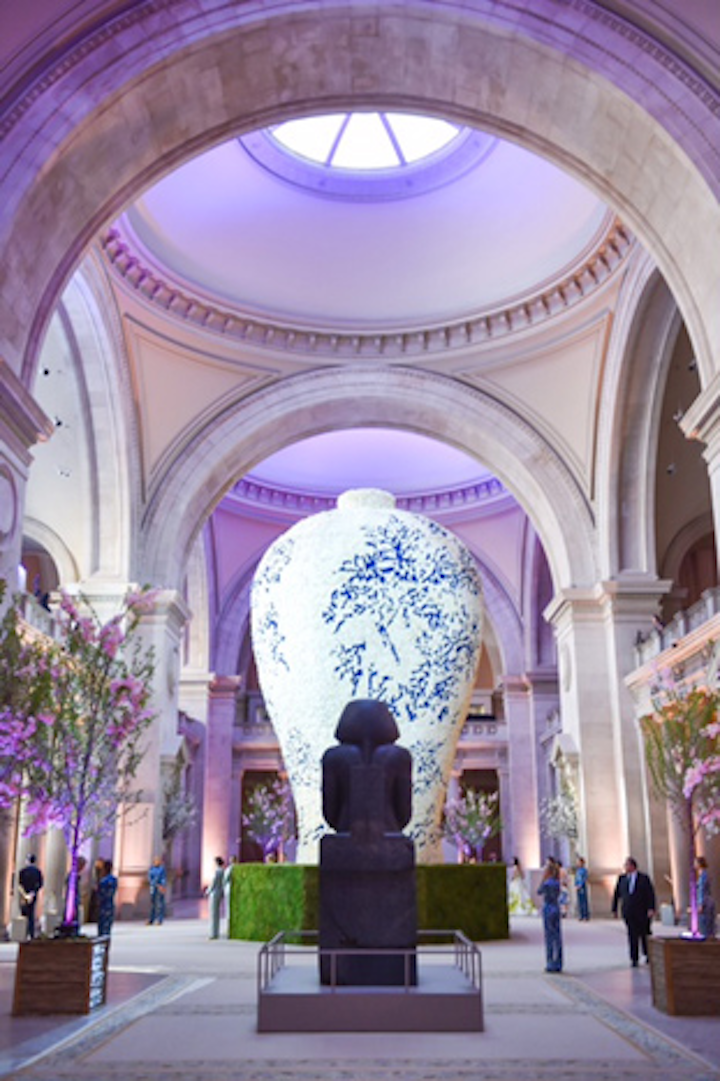 In the center of the Great Hall, an iconic Chinese porcelain vase was replicated completed in flowers. It took nearly 150 workers to piece together the 30-foot-tall living sculpture, a creation that towered over the green moss-covered information desk and weighed 12,500 pounds. In total, the vase featured 250,000 stems of white roses, thousands of which were dyed blue to achieve the blue porcelain effect.
Photo: BFA 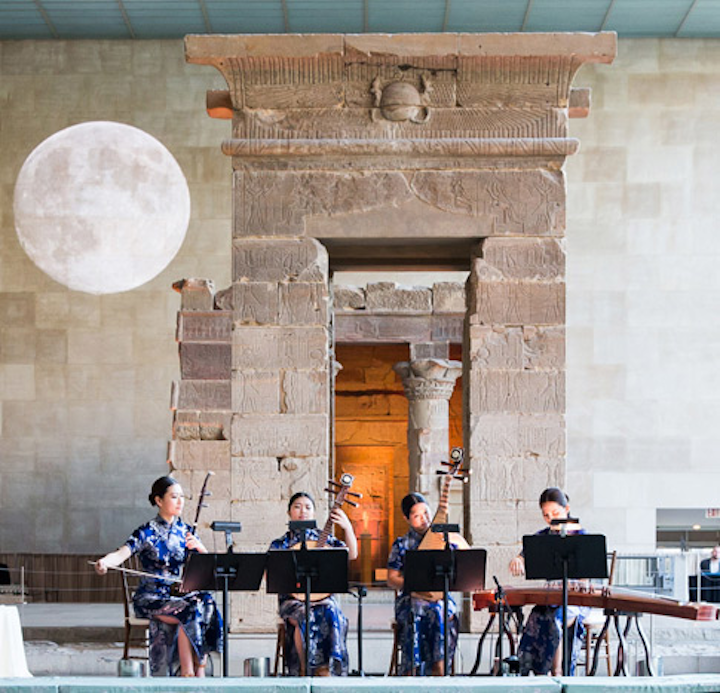 In the Temple of Dendur, which served as the cocktail space, a female quartet dressed in cheongsams played “In the Mood for Love.”
Photo: BFA 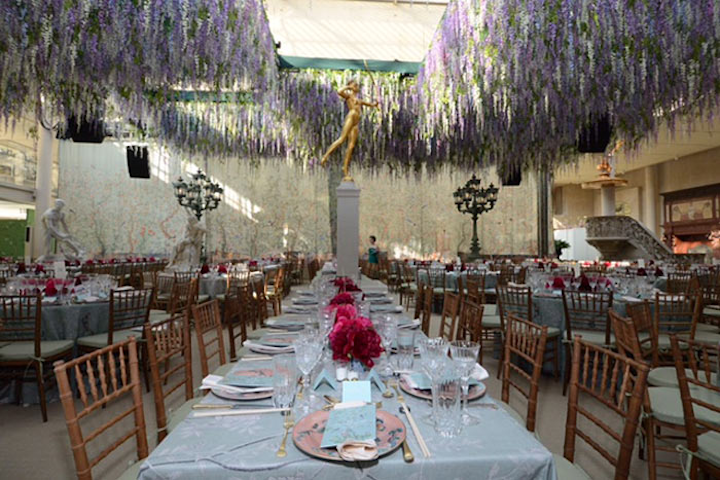 To create a feeling of intimacy in the expansive Engelhard Court, Avila and his team lowered the ceiling to 14 feet by hanging nearly 200,000 stems of wisteria overhead. Guests called to dinner via Chinese gongs found de Gournay hand-painted wallpaper created by traditional Chinese artists covering the Central Park-facing windows.
Photo: Courtesy of the Metropolitan Museum of Art 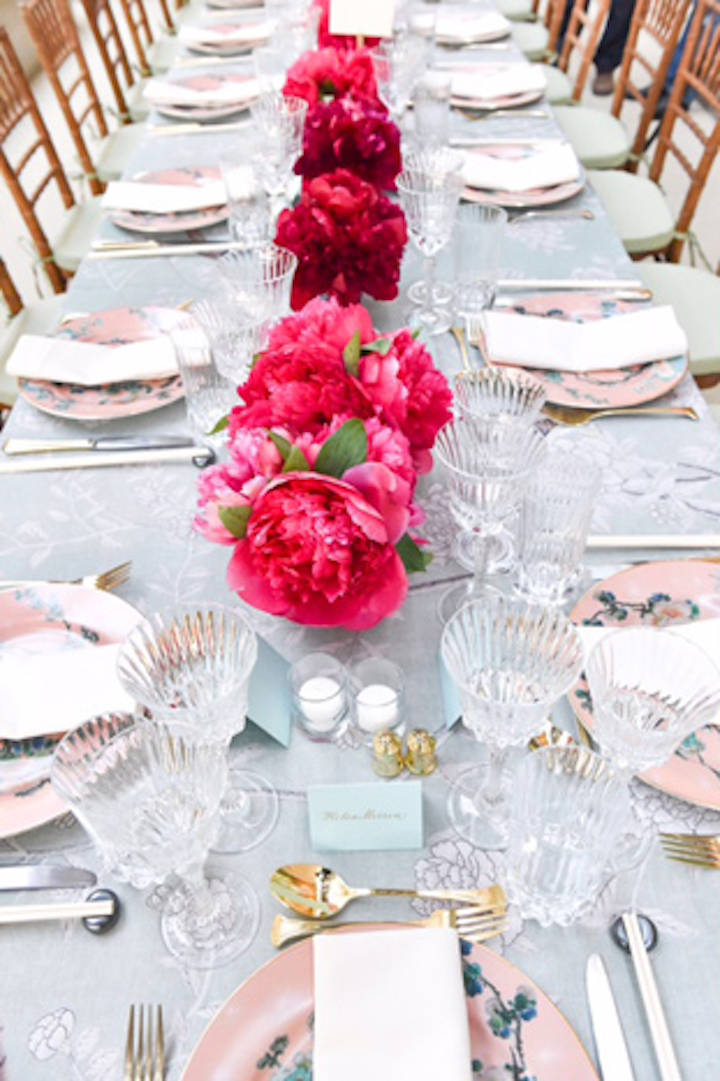 Also from de Gournay were the custom-printed tablecloths that adorned each of the 64 dinner tables. Peonies in shades of red and hot pink were exclusively used as the table centerpieces, while seat cards were fashioned in a pastel blue. The wood-backed seats, dressed up and covered in year's past, were purposefully left untouched.
Photo: BFA 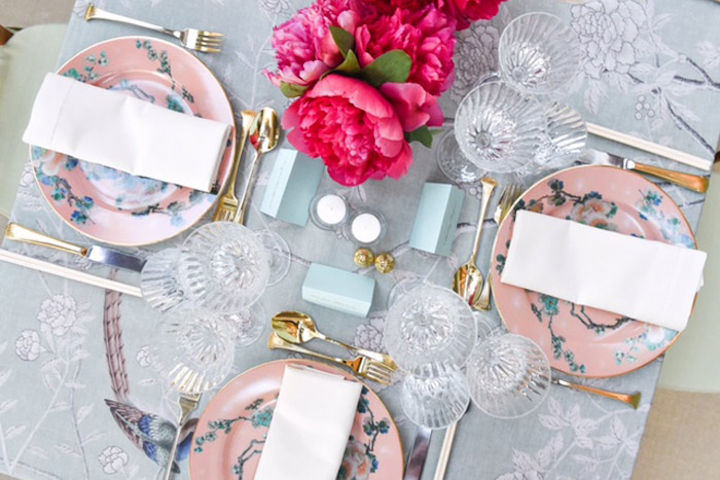 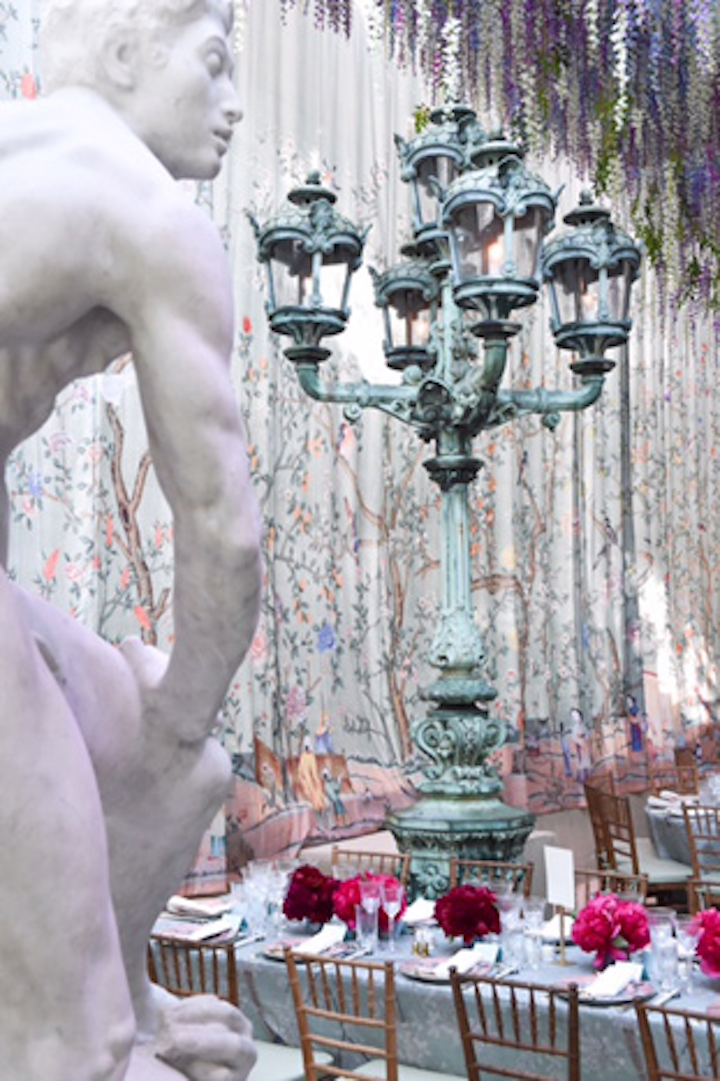 The existing light fixtures in Engelhard Court could not be removed, so Avila designed around them—as he does everywhere. A massive 80- by 30-foot stage curtain created from de Gournay hand-painted wallpaper served as the elegant backdrop from which Rihanna would later emerge to perform for the 640 guests.
Photo: BFA 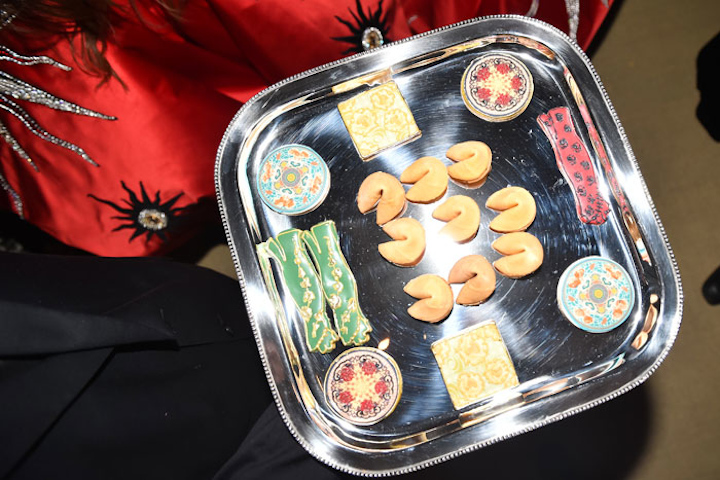 Although conscious to avoid clichés, organizers did make small nods to Chinese culture, including fortune cookies, the chopsticks at each place setting, and the lack of the table number four.
Photo: BFA
More in Event Design