A garden party may bring to mind a posh gathering with soft pastel color palettes and delicate catering. But two different benefits this spring created their own spin on the concept.

At the Museum of Modern Art’s Party in the Garden on June 1, one of the institution’s signature fund-raisers, some 660 guests gathered for cocktails in the Abby Aldrich Rockefeller Sculpture Garden followed by dinner in the Gund Garden lobby and the museum’s main lobby. An after-party featured a performance from pop singer Robyn. The decor from Concept Event Group created a lush garden look with layers of greenery, starting with an arrivals wall framed with plants and vines—like stepping into a painting.

The Lowline—an organization working to turn a historic trolley terminal on the Lower East Side into an underground park—held its inaugural Underground Garden Party on June 7 for 170 guests. Produced by Empire Entertainment, the spring benefit came about following the success of the group’s successful annual fall fund-raiser, the “Anti-Gala.” The garden party was the first seated dinner to take place at the Lowline Lab, a working research and development facility that uses solar technology to grow plants from pineapple to herbs.

The event’s theme was a loose interpretation of 16th-century masterpiece “The Garden of Earthly Delights” by painter Hieronymus Bosch, according to Robyn Shapiro, the Lowline’s deputy director. Roaming entertainers choreographed by Vance Garrett Productions took on the guise of nymphs. One wore a live snake around her shoulders, while others poured cocktail shots straight into guests mouths from watering cans. “With our events, we try to create something unexpected and by no means traditional,” Shapiro said.

Chef John Fraser of the New York restaurants Narcissa, Nix, and Dovetail, created an unusual, interactive menu with catering support from Bite. Served family-style, the meal emphasized a “collaborative spirit,” said Scott Skey, Bite’s chef and owner. “What John and I believe in is the emphasis on community and sharing. It’s pushed further than any dinner I’ve done.”

Dinner began with a salad that guests assembled themselves from a bowl of lettuce greens and a tray of whole vegetables, which guests cut up and then dressed themselves. Chefs aprons and gardening gloves were provided for each table. Other dishes, from poached salmon to barbecue short ribs, had a similar do-it-yourself style. “It wouldn’t work at the ballet gala,” Skey said. “This is a group that’s very game.”

Here's a look inside the two benefits. 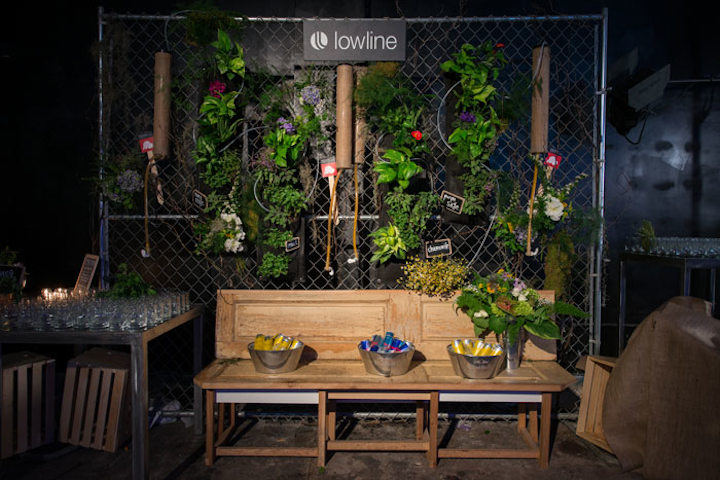 At an "irrigation bar," guests could serve themselves cocktails from spigots attached to a chain link fence. Aromatic garnishes included purple sage, mint, and basil. 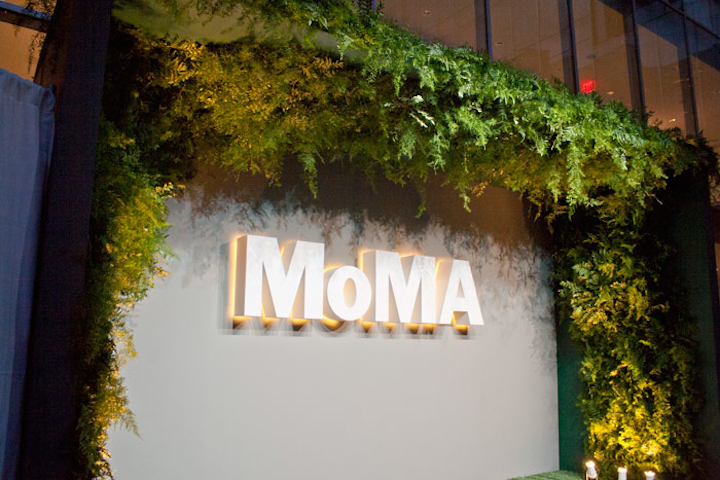 Guests at the event could pose for photos at an arrivals wall framed by greenery. 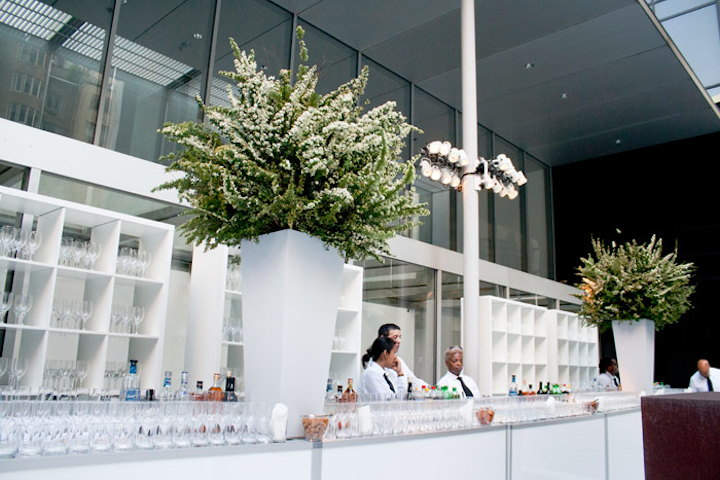 Tall floral arrangements in the sculpture garden kept to the white-and-green color scheme during cocktails. 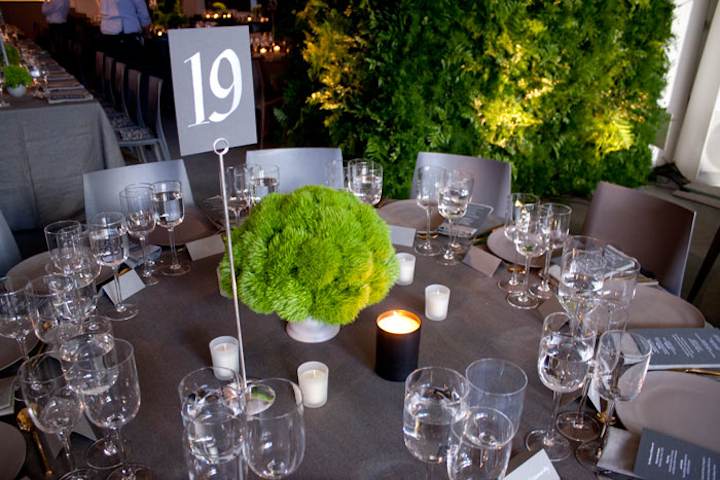 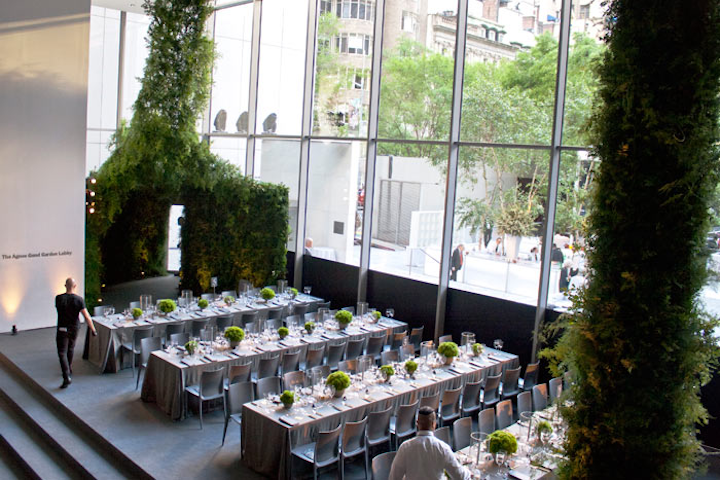 Following cocktails, guests entered the main dining room through a forest-like foyer with a dramatic drape of greenery sweeping up to the ceiling. 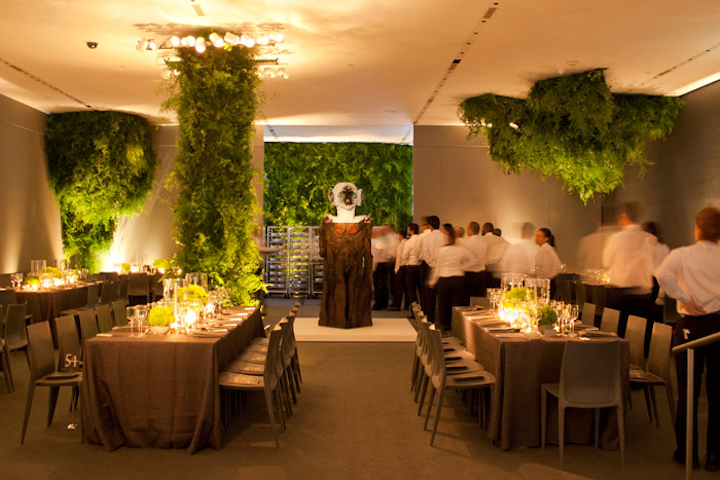 Work from each of the honored artists was on display, including a piece from sculptor Huma Bhabha. 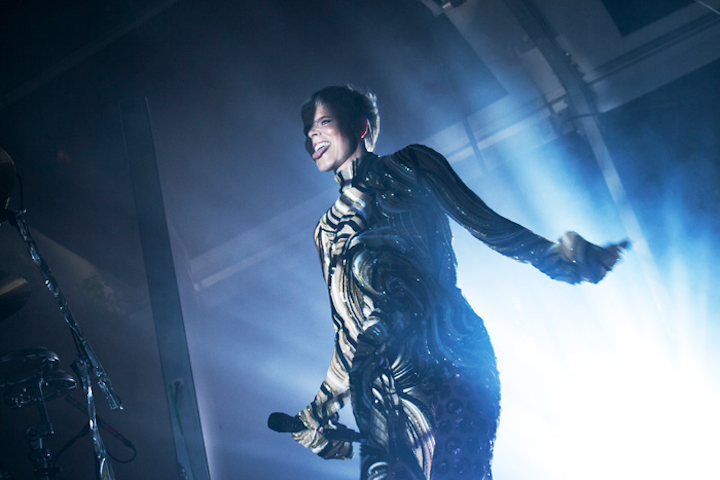 The pop singer Robyn performed at the after-party on a stage set up in the sculpture garden. 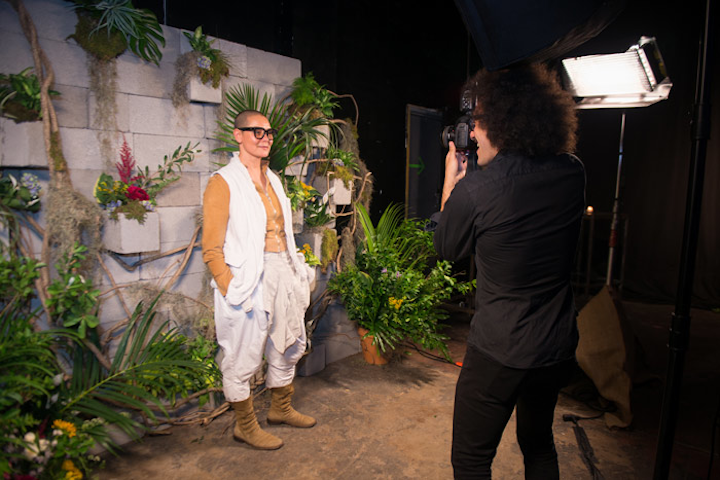 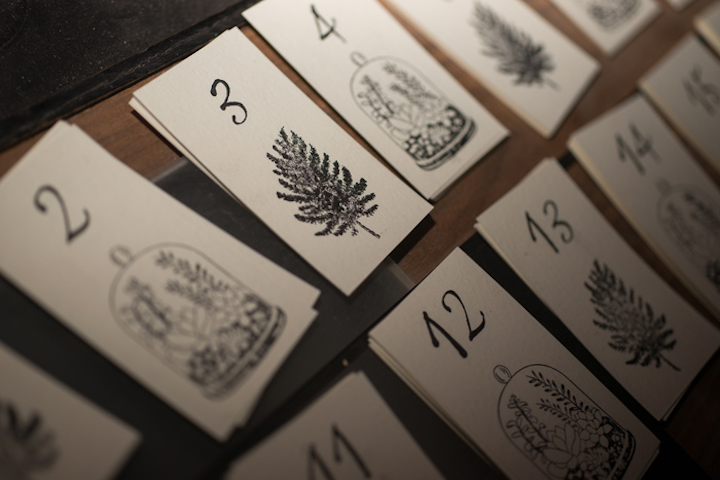 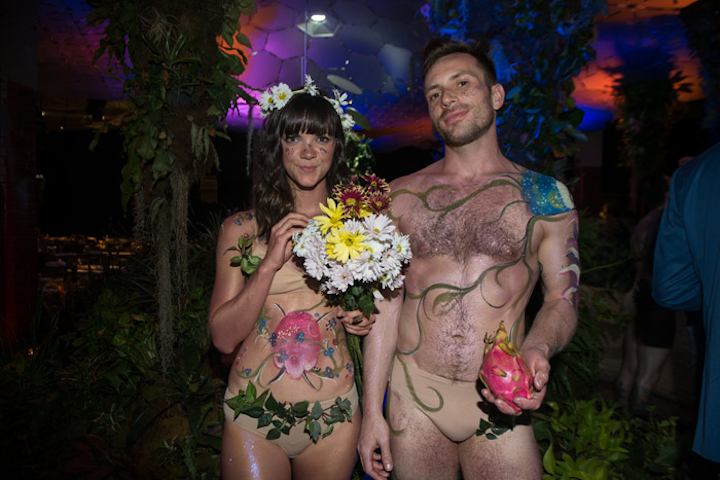 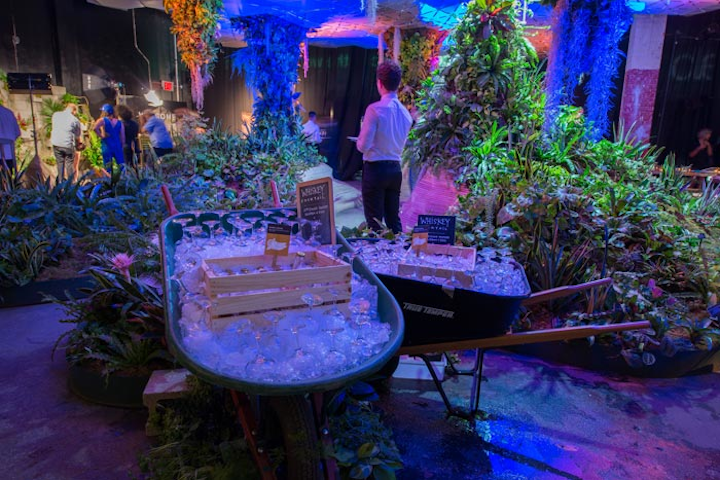 A whiskey-based cocktail was served from wheelbarrows. 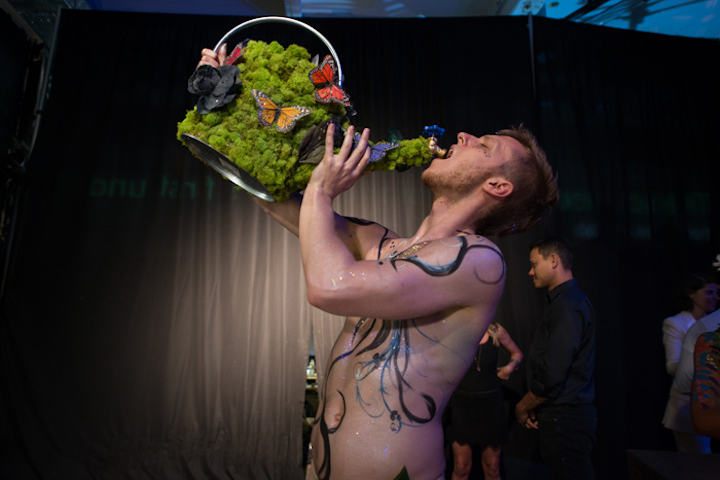 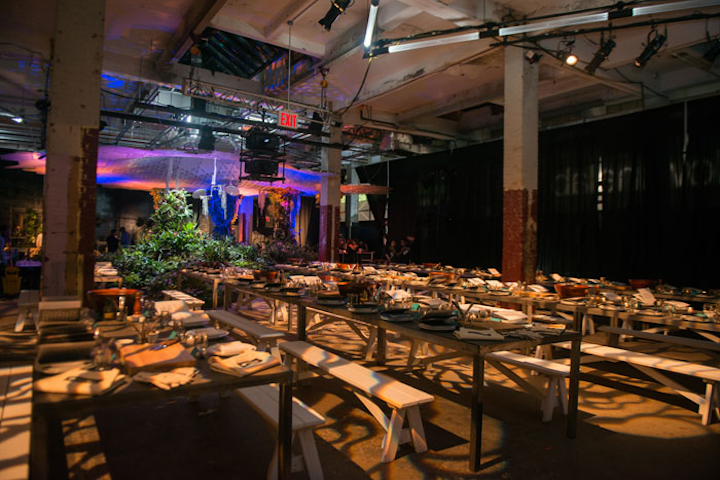 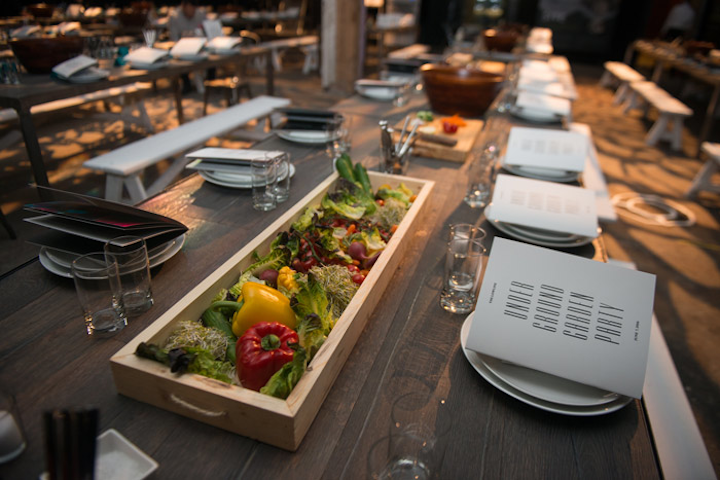 Chef John Fraser's interactive dinner menu started with a salad that guests assembled themselves. Guests cut vegetables and dressed their own salads. Chefs aprons and gardening gloves were provided for each table. 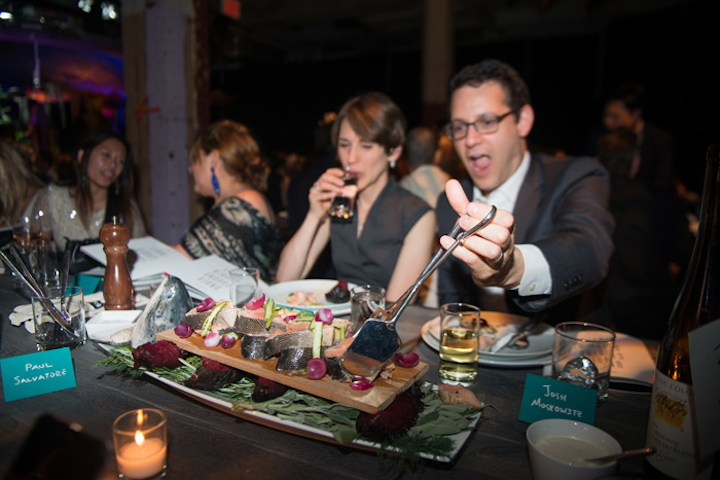 The family-style dinner included poached salmon served on a plank. Below it was a platter of beets.