See a Grown-Up Take on a Batman Birthday Party

San Francisco-based Glow Events regularly produces celebrations from weddings to corporate gatherings to bar mitzvahs, but founder Christina Millikin elevated her planning skills to heroic levels in January when she recreated Wayne Manor’s Batcave—complete with the actual Batmobile from the 1989 film Batman—at Clos Pegase winery in Napa Valley for a client’s 40th birthday.

The upscale superhero theme evolved through multiple phases of the planning process. “The first request from our client was to find a unique and exclusive venue for the party,“ Millikin explained. “We cast a wide net and searched everywhere from Carmel to wine country. During that search, we also started thinking about themes. Our client has been a fan of comics since childhood, so that arose as an early front-runner.”

Once the Glow Events team discovered that Clos Pegase had a wine cave that could serve as the Batcave for dinner, that cemented both the theme and the location.

Millikin’s staff then turned to fulfilling their client’s wish to make a grand entrance into the soirée. “We looked into everything from him parachuting into the winery’s courtyard to having the ‘Joker’ do a theatrical stunt in which the client magically appeared,” Millikin said. All of the ideas, however, felt gimmicky. During her team’s weekly creative meeting, a staffer suggested that the client could drive up to the party in the Batmobile from the actual film.

“We instantly loved the idea and sourced the car first to make sure it was possible before presenting it to him,” she said.

Booking the car, however, did not guarantee that the Batmobile would actually be present for the party. Millikin worked with Star Car Central in Los Angeles to rent the vehicle, but transporting it to wine country proved tricky. Because it is moved on an open-air trailer and the paint is sensitive to precipitation, the Batmobile is not permitted to travel in inclement weather.

“Of course it rained the entire week prior to the party, so we were all on edge if the car would be able to make it,” she said. To accommodate the event, the Star Car Central team planned a route to allow them to make it to Calistoga and back while avoiding storms.

Riding in the Batmobile may be a childhood dream come true, but Millikin’s sophisticated design inside the Clos Pegase cave would make any adult long to attend a black-tie dinner in Gotham City. Inside the dinner venue, guests were greeted by tall candelabras, trailing ivy on the tables (a wink to Batman villain Poison Ivy), leather-accented linens, and elegant place settings. The key, Millikin said, was to focus on luxury and avoid anything that felt kitschy or cliché.

“We had to tread very lightly on making sure the decorations were fun and surprising, but still elevated,” Millikin said. “I’m a strong believer that you need to focus on anything guests come into contact with physically, from the tablecloth to the chair to the place card.”

To achieve that goal, Glow Events selected luxe tabletop rentals, worked with San Francisco’s Yonder Design to create the custom logo and graphics that adorned all the paper goods, and commissioned a lucite bat logo “guestbook” that revelers signed with metallic pens.

The surprises continued when the 60 attendees sat down to dinner and discovered souvenirs and games labeled with their individual “superpowers.” “The gifts were simple, but they each had a nice favor tag, which elevated the look,” Millikin said. "All of the little details in the party created the surprise and delight effect which carried the theme, and they were all done in an elevated way."

After months of contemplating superpowers, designing a hidden lair, and outwitting forces of nature to make her client’s dream party happen, Millikin is something of an expert in party-planning heroics. So what’s her superpower?

“I think calm under pressure and creative problem-solving would be my two powers,” she said. “As an event planner, sometimes you have to make miracles happen and come up with solutions to crazy unforeseen problems that arise, all without letting the client know. Although mind-reading would also come in handy!” 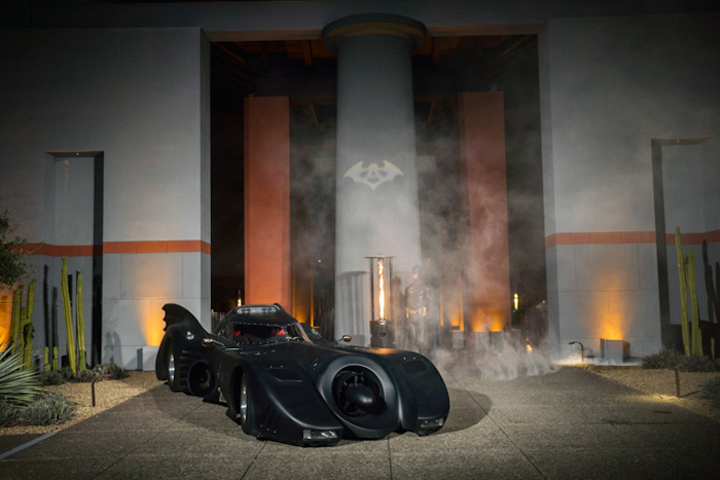 To create a grand entrance for the client, Glow Events worked with Los Angeles-based Star Car Central to secure the Batmobile from the 1989 Batman film.
Photo: Andrew Weeks 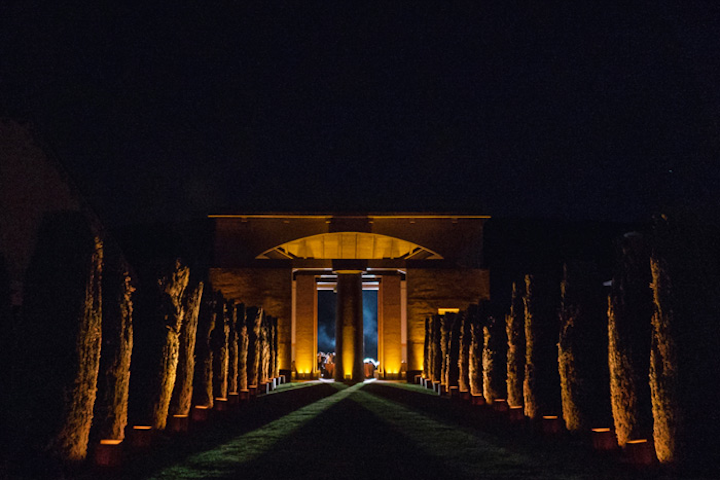 Clos Pegase winery in Calistoga fit the moody vibe organizers were looking for, and was dramatically lit by Got Light to evoke the feeling of Gotham City.
Photo: Andrew Weeks 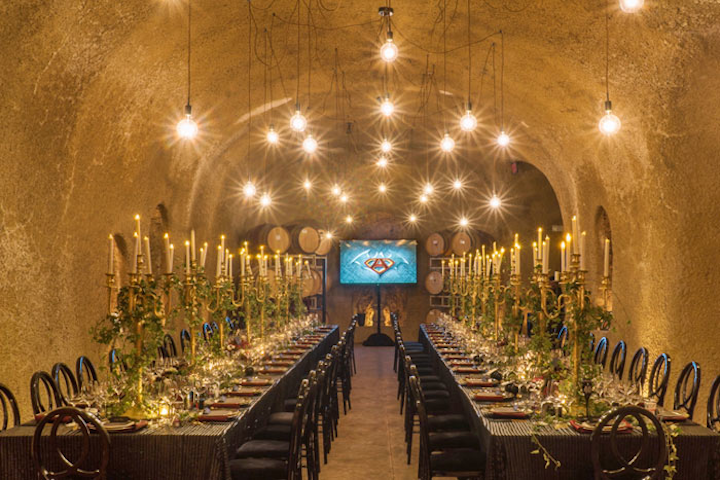 Clos Pegase has a wine cave that organizers transformed into the “Batcave” for the dinner portion of the evening. Tabletops were adorned with tall candelabras, trailing ivy on the tables (a wink to Batman villain Poison Ivy), leather-accented linens, and elegant place settings.
Photo: Andrew Weeks 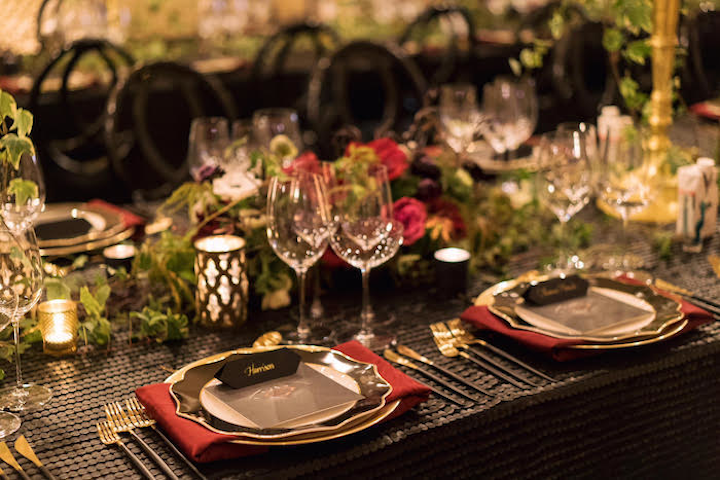 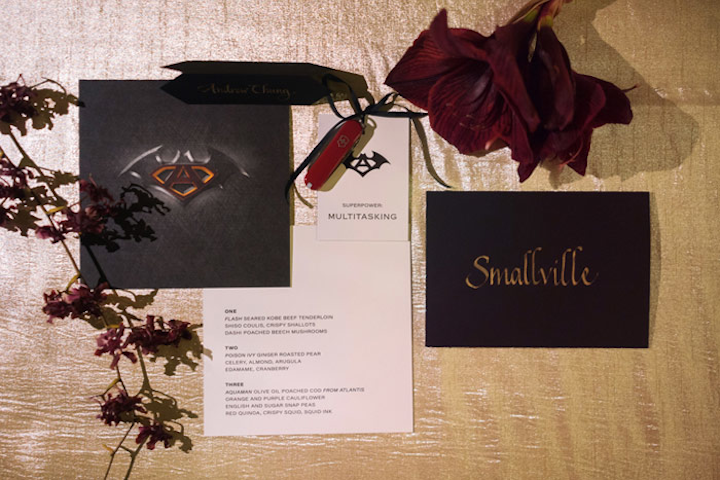 Yonder Design created a custom logo that featured an A to represent the client’s name. The graphics adorned all paper goods, from the invites to the menus to the place cards and napkins.
Photo: Andrew Weeks 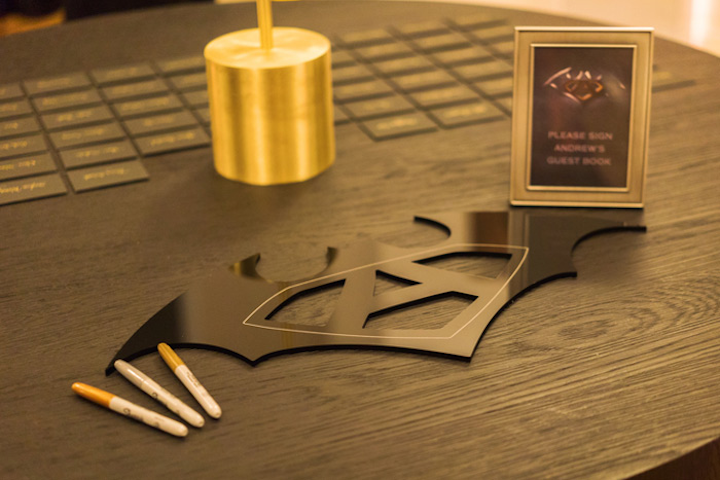 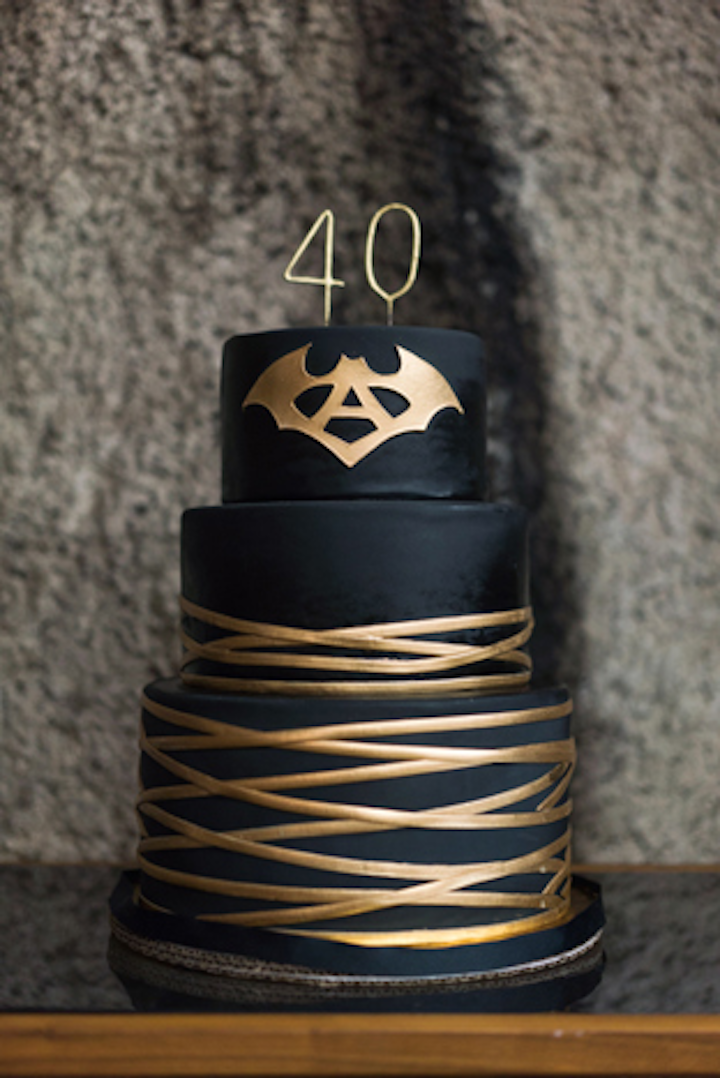 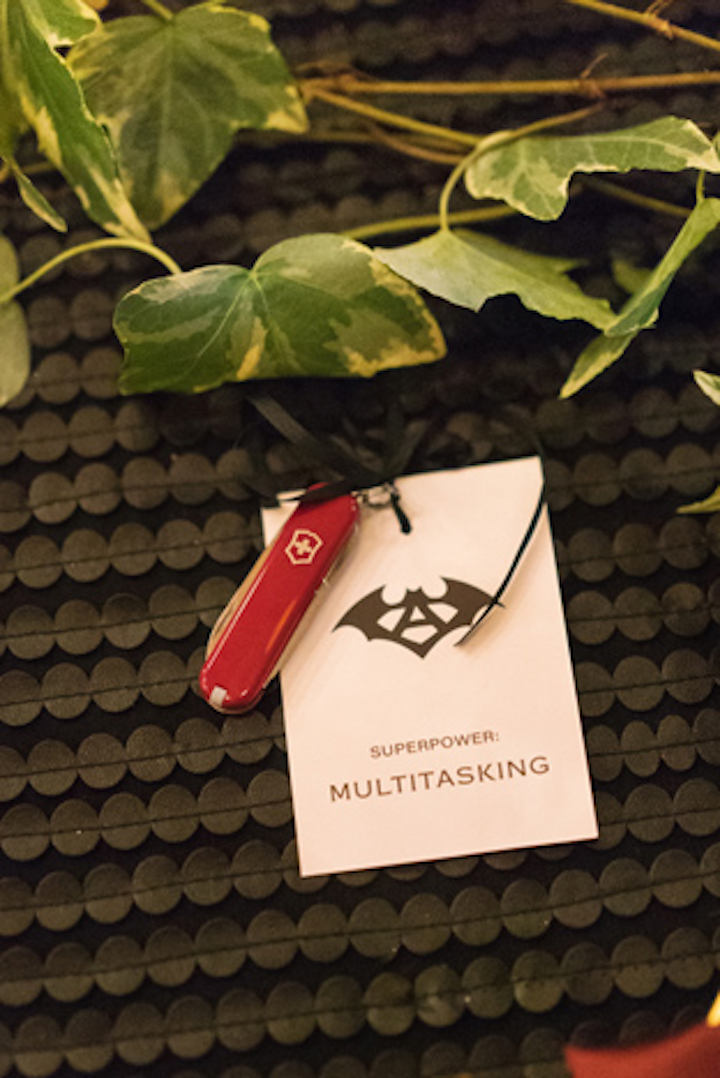 Each of the 60 guests received a gift showcasing their own "superpower" that the client had selected for them.
Photo: Andrew Weeks 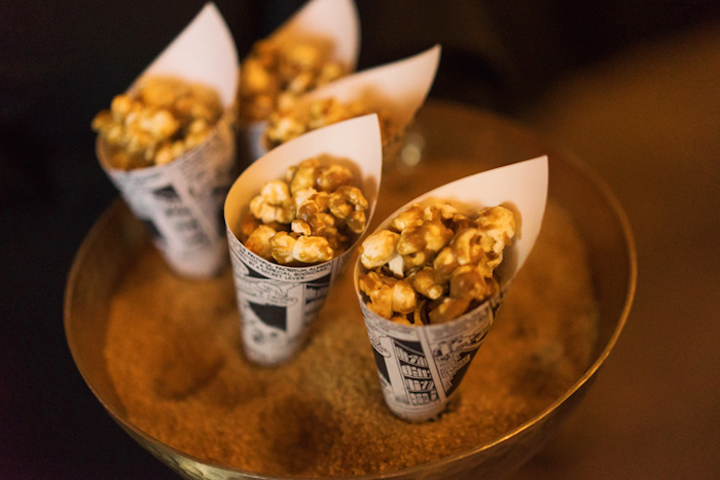 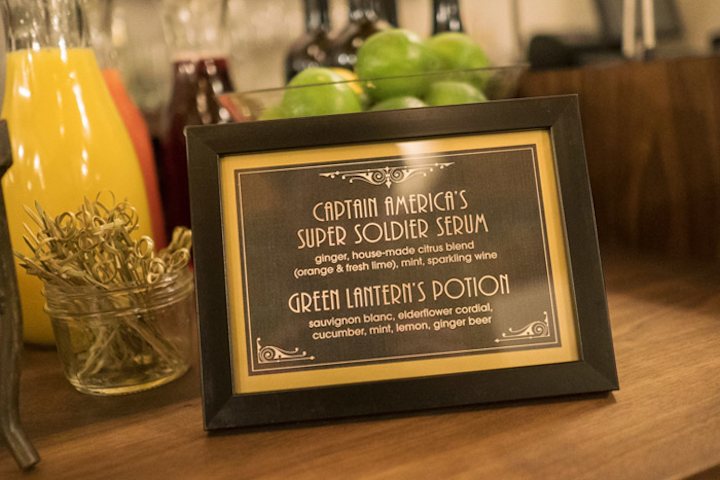 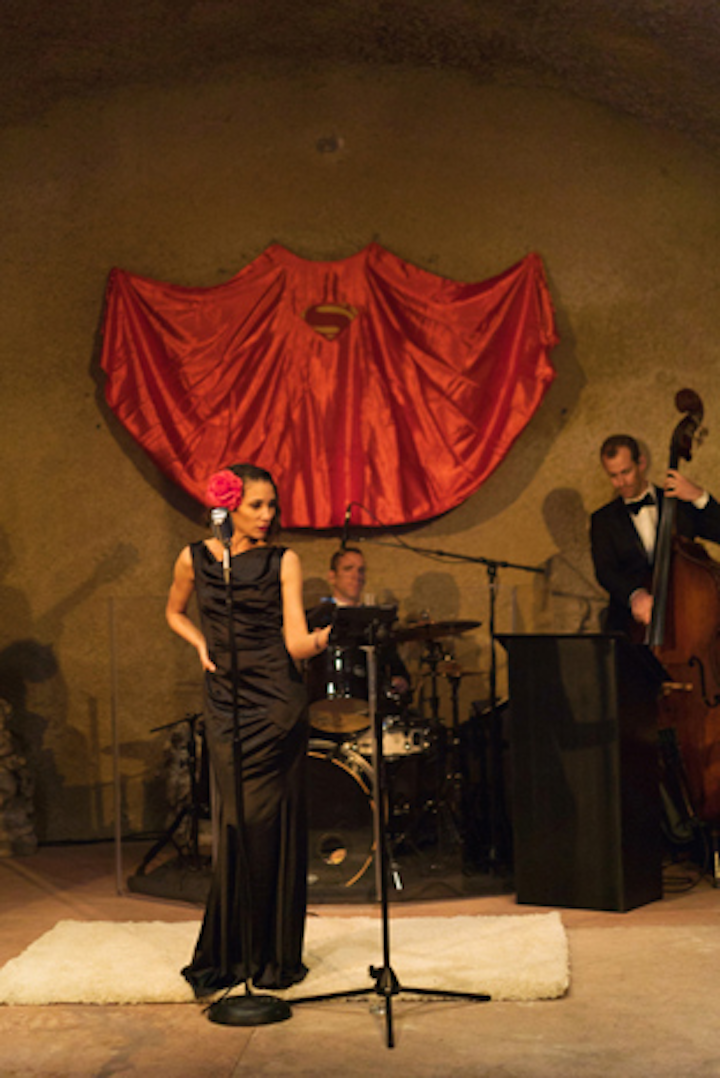