See What You Missed at the 2018 James Beard Awards

Here's how some of the chefs were inspired by this year's event theme.

On May 7, the James Beard Foundation Awards were held once again at the Lyric Opera of Chicago. This year’s theme, “Rise,” celebrated the culinary community and the power of food.

Attendees and chefs wore pins saying what they “rise” for, including equality, locally sourced food, no waste, and integrity. In addition, as a reflection of the theme, nearly 30 of the gala’s reception chefs were former James Beard Foundation Chefs Boot Camp for Policy and Change participants. The boot camps are retreats where chefs train to be leaders for change within the food world, receiving advocacy and media training while learning about important issues, challenges, and opportunities.

After the awards ceremony, which was emceed by Carla Hall, the roughly 2,000 guests noshed on a variety of small plates, including an asparagus–spelt tart, octopus with tomato, and chocolate bon-bons. Here’s a look at the menu and how some of the chefs interpreted the event’s theme. 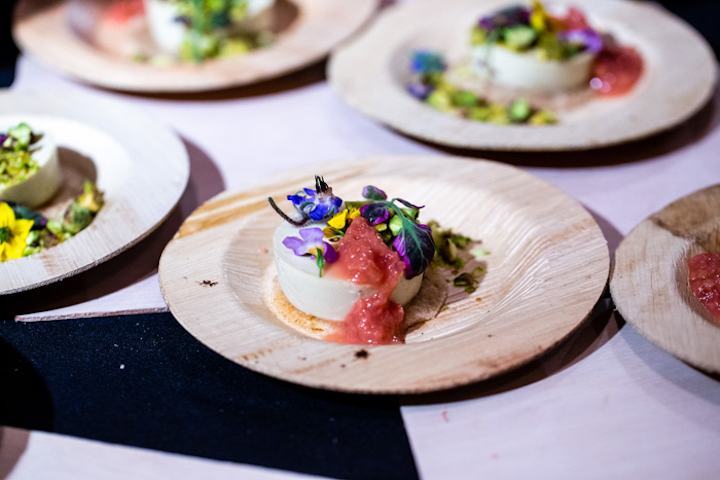 Chef Jamilka Borges of the Independent in Pittsburgh presented an asparagus–spelt tart topped with candied pistachios and rhubarb and garnished with edible flowers.
Photo: Francis Son 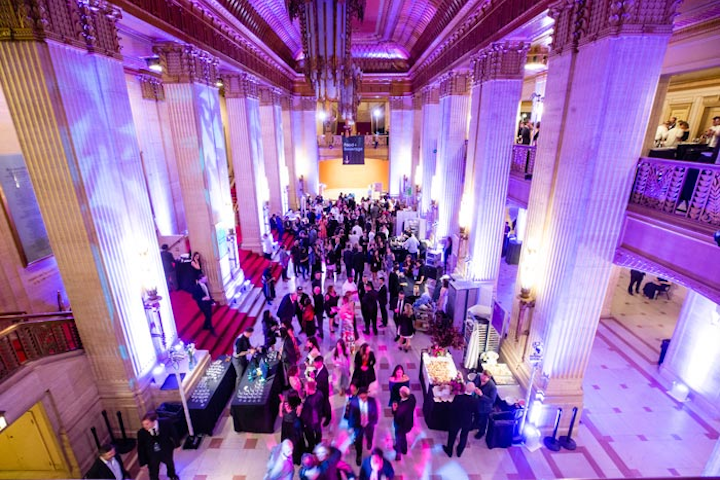 Nearly 2,000 guests dined on a variety of small plates inside the Lyric Opera of Chicago before the awards ceremony.
Photo: Francis Son 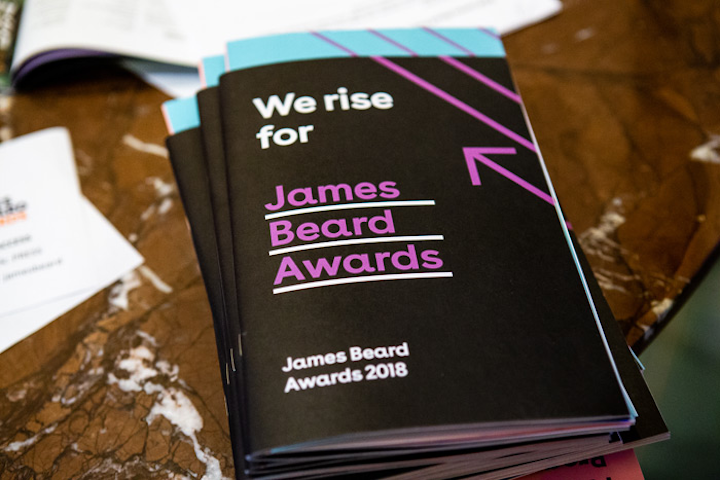 This year’s theme, “Rise,” celebrated the culinary community and the power of food. Attendees and chefs wore pins saying what they “rise” for, including equality, locally sourced food, no waste, and integrity. The event program continued the graphic treatment that appeared throughout the awards signage.
Photo: Francis Son 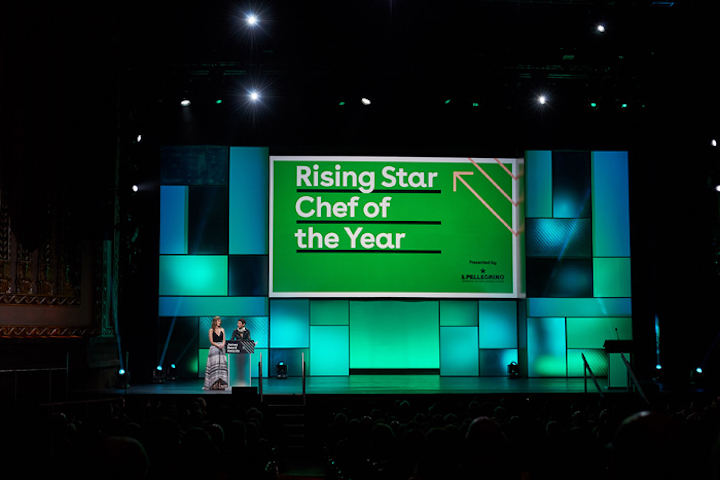 The illuminated color blocks and projection screen in the stage design changed shades throughout the awards ceremony.
Photo: Kent Miller 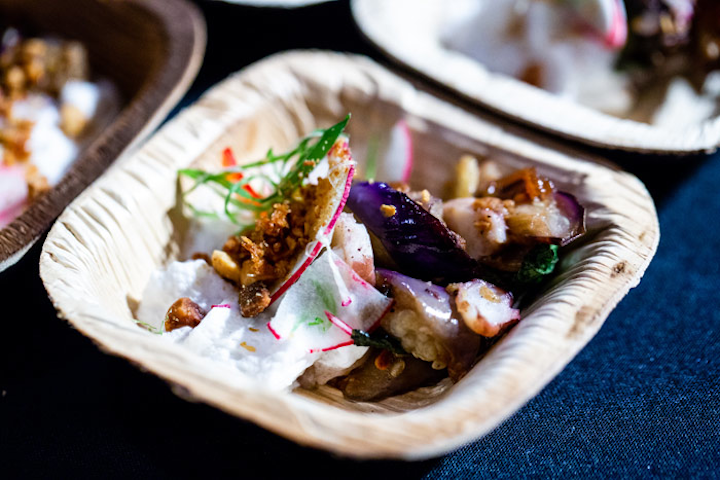 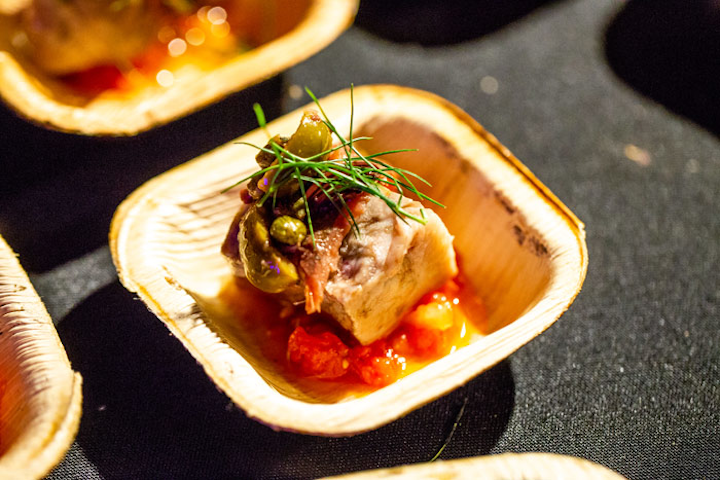 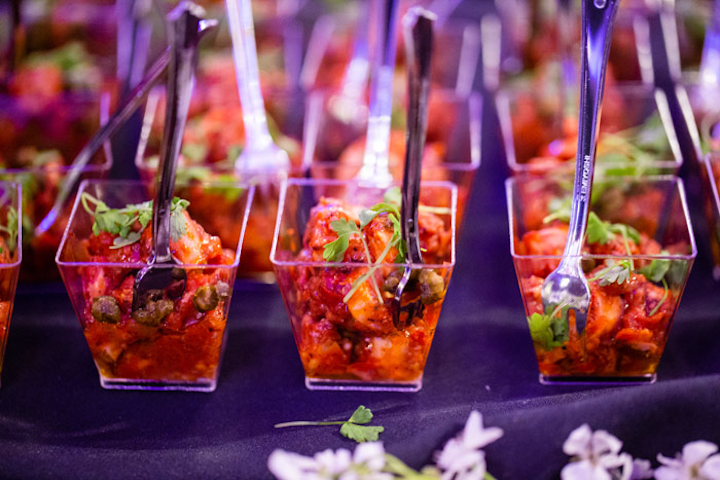 Chef and owner Amy Brandwein of Centrolina in Washington offered up agliata di polpo: octopus with tomatoes prepared in the cooking style of Alghero, a city in Sardinia, Italy.
Photo: Francis Son 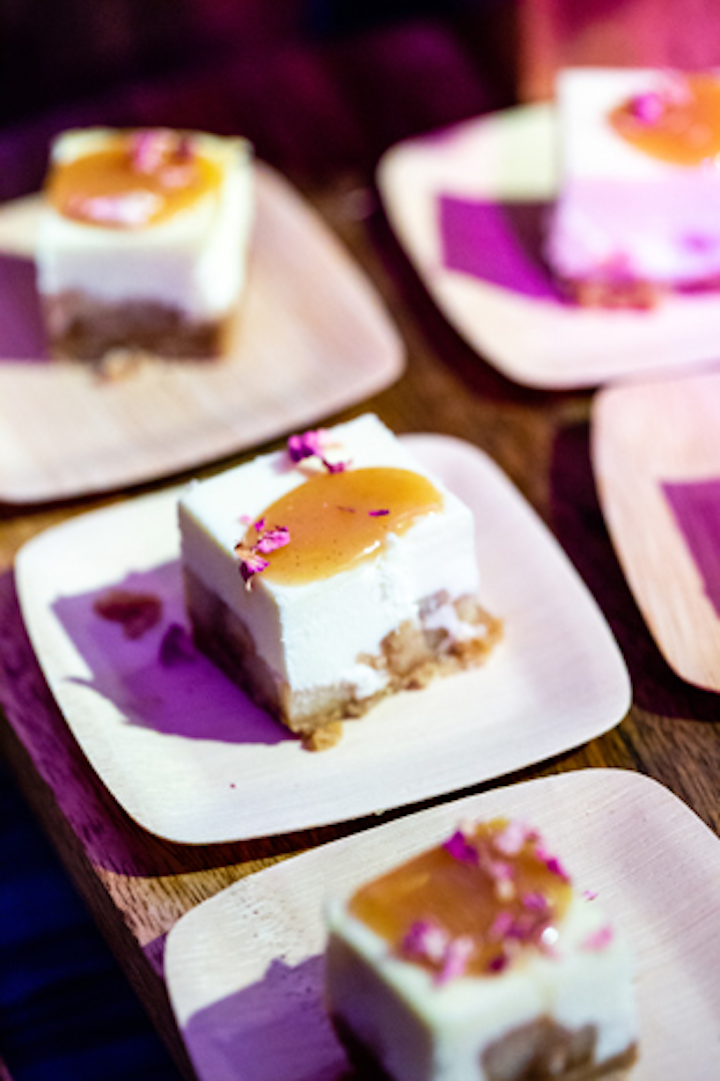 Diana Moles, vice president of research and development at Eli’s Cheesecake in Chicago, served up apple cheesecake bites. The dessert was presented by the Illinois Office of Tourism.
Photo: Francis Son 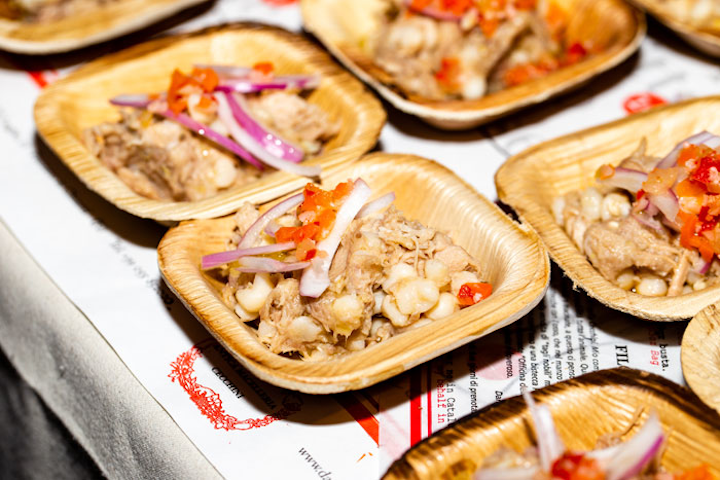 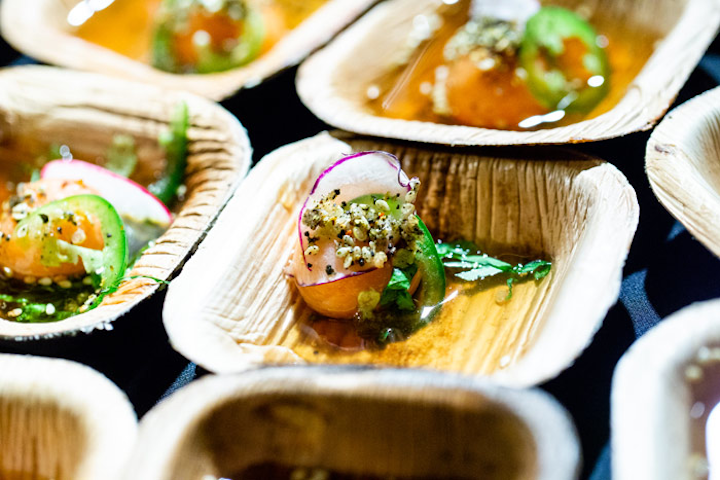 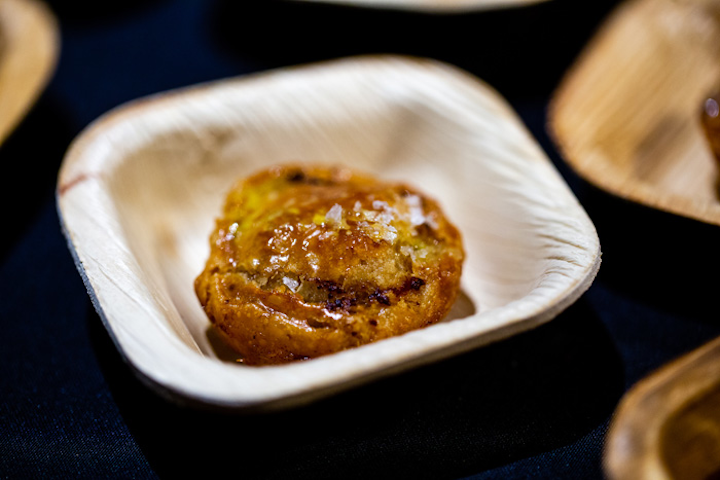 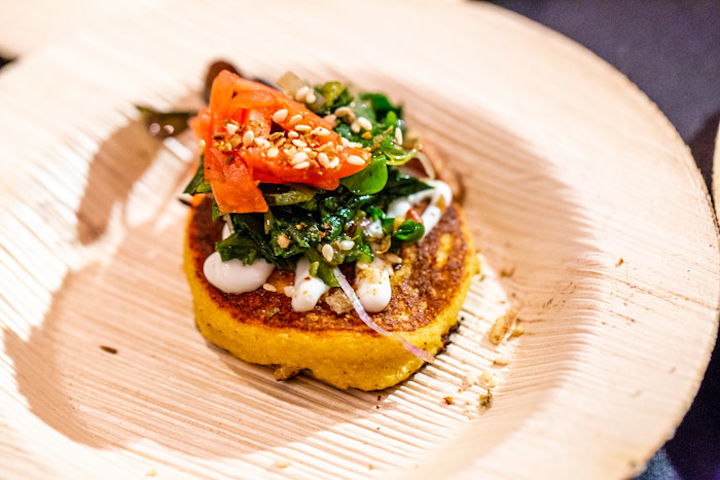 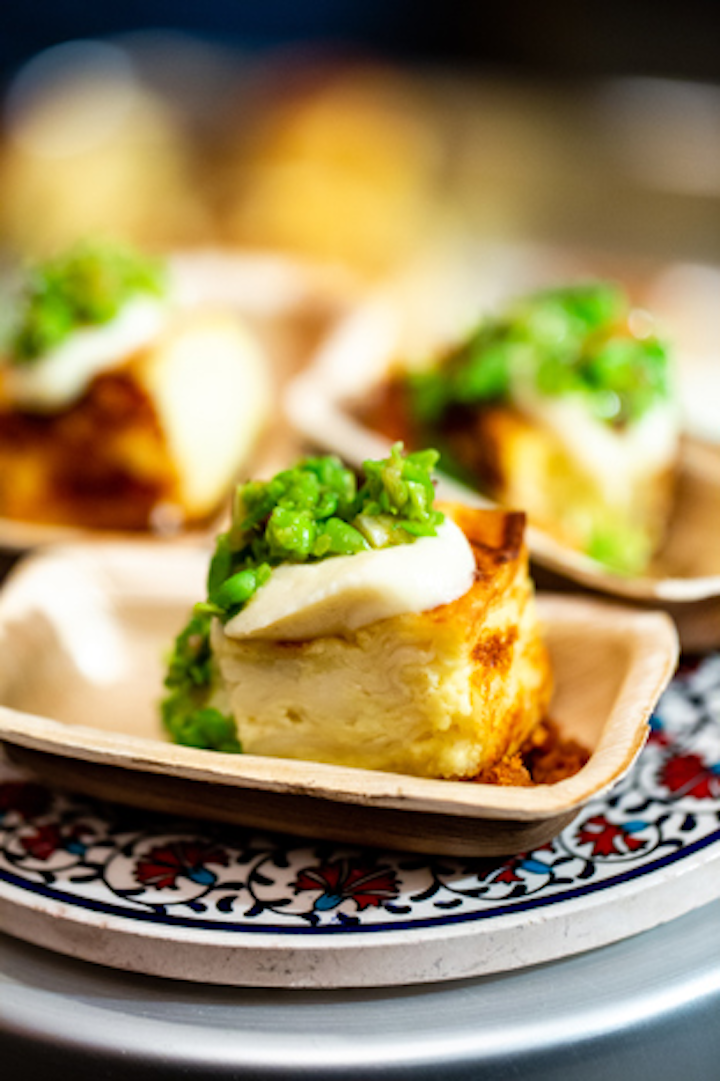 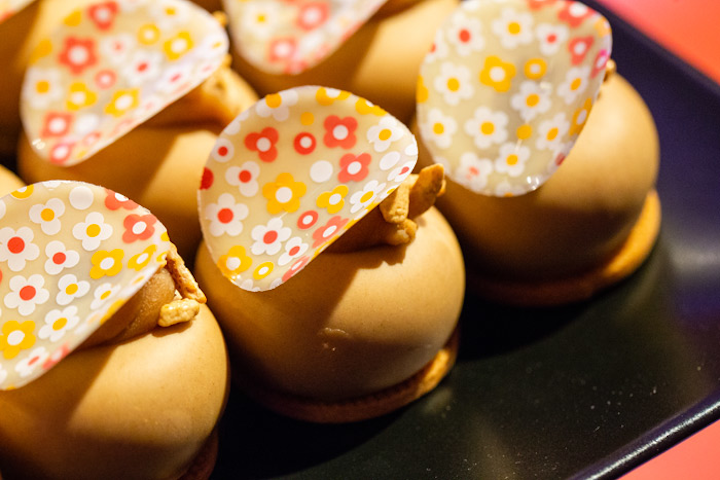