The network celebrated the premiere of its new 1980s dance musical drama series Pose by hosting an authentic ball in a former Harlem church.

Pose, a new FX series about the queer ballroom world of New York in the 1980s, has already made television history in a number of ways. Along with being the first scripted series on a major television network to focus on the lives of members of the queer ball community, the show—which was co-created by Ryan Murphy, Brad Falchuk, and Steven Canals—has the largest number of transgender actors ever in series regular roles and features the largest recurring cast of L.G.B.T.Q. actors for a scripted series.

To celebrate these achievements, FX paid tribute to the ball community and brought the show’s aesthetic to life with a live ball and interactive vignettes. The network partnered with BMF Media to produce and design the event at Harlem Parish—a former church turned cultural center—on June 2, a day before the series premiere.

“To be one of the first scripted TV series to feature such a large cast of transgender actors in regular roles is really groundbreaking,” said Kenya Hardaway, senior vice president of integrated promotions at FX Networks. “We wanted to make sure we made every effort we could to embrace this community and give them as exciting an event as we could. We wanted this event to feel authentic. It was about celebrating what they created, honoring it, and respecting it.”

To deliver attendees a genuine ball, FX worked with ballroom icon Jack Mizrahi and Twiggy Pucci Garcon (also a consultant on the show and ballroom legend) to curate the performances and panel of judges, which consisted of numerous ballroom pioneers. The ball took place in front of a trophy stage decked out in gold streamers, which was a recreation of the stage from the show—and inspired by stages at 1980s balls.

FX also chose to hold the event uptown for a reason. “Being in Harlem was important to us, because the ball culture was really rooted in Harlem,” said Hardaway. “We wanted to make sure we held the event in a place where ball culture really began. We felt we could really bring something special there.”

Attendees—who included the show’s cast, influencers, and media—were handed branded pink fans when they entered the venue, which was lighted in a pink and purple color palette. The space’s interior perimeter was lined with interactive vignettes and bars that honored the L.G.B.T.Q. community.

Stations included a makeup vanity boudoir, a neon library, and a glow stick photo booth. Nostalgic props such as records, magazines, and clothes were also showcased inside the venue.

The show’s digital campaign was brought to life at the #Pose4Love activation, where attendees could watch recorded messages of positivity from the cast and write their own messages of encouragement, which will be shared with members of L.G.B.T.Q. organizations and partners.

“We wanted to make sure that throughout the event we had touch points where people could take a moment and dig into the history of the community, and appreciate some of the origins of the things we were celebrating,” said Hardaway. “For the #Pose4Love activation, we felt it was important to give people the opportunity to pass messages on to someone who might be struggling.”

Here’s a look at how FX celebrated the Pose premiere. 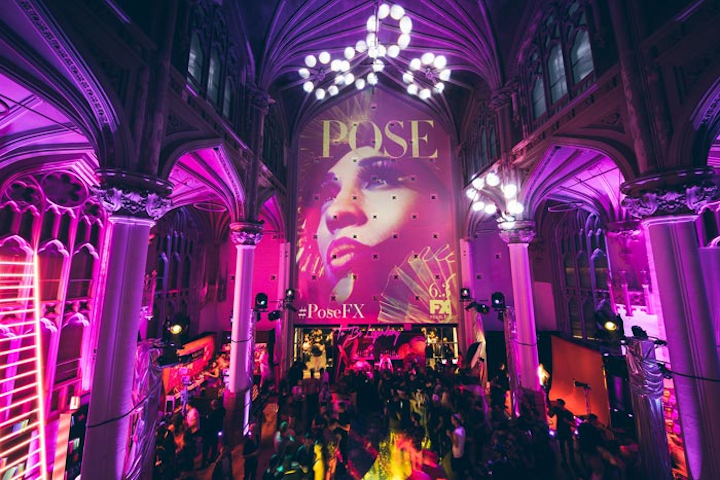 Inside, the venue featured massive projections of promotional images for the series.
Photo: Sean Smith 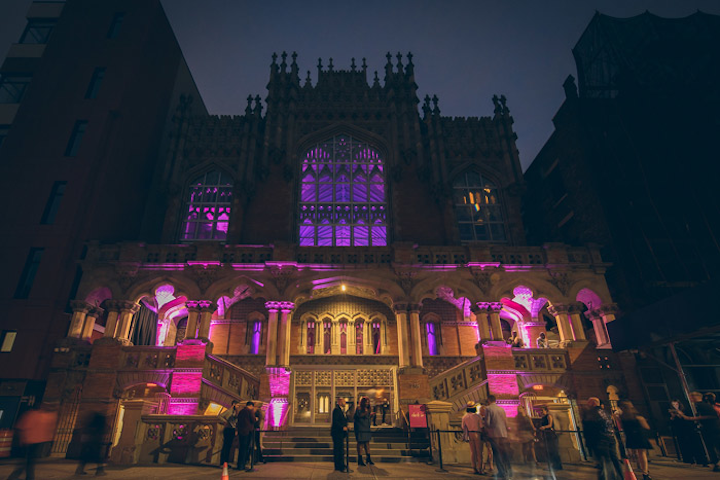 The Pose Ball took place June 2 at Harlem Parish. The outside of the former church was lighted in pink, with other hues from the inside shining through the windows.
Photo: Sean Smith 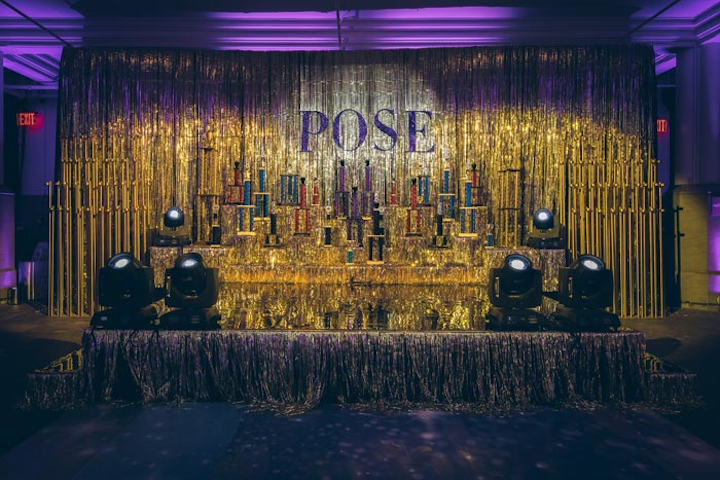 A replica of the trophy stage from the series—inspired by ballroom stages from the 1980s—stood in the front of the venue. The stage was available for guest photo ops and was also where judges gave their scores for the ball.
Photo: Sean Smith 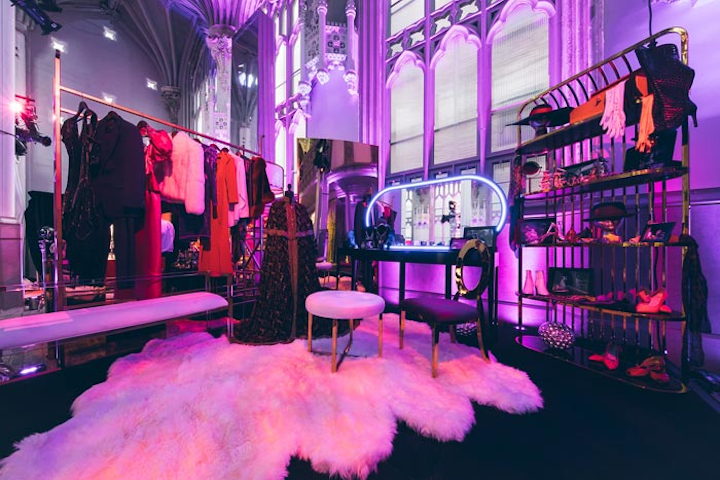 A makeup vanity station was decorated with dazzling costumes similar to those featured in the series. Guests could get touch-ups at the station.
Photo: Sean Smith 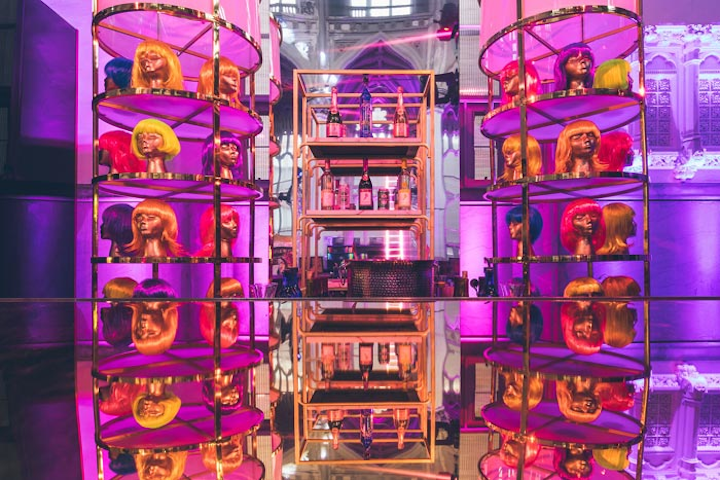 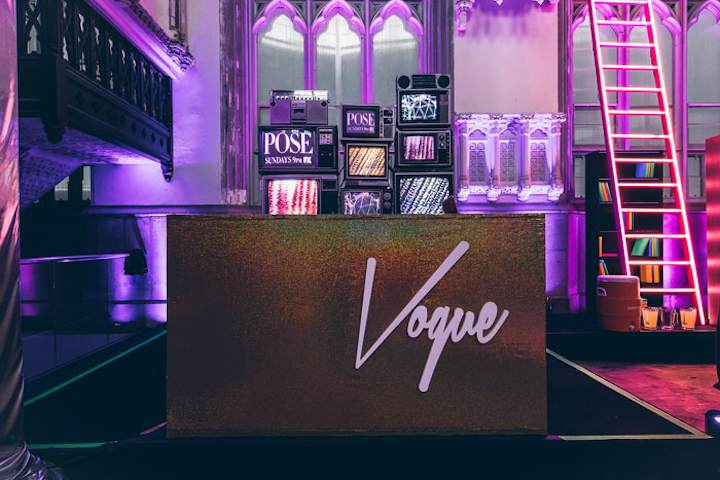 A DJ booth paid homage to voguing, a dance that originated in the queer ball community. The booth featured a backdrop of vintage TV props.
Photo: Sean Smith 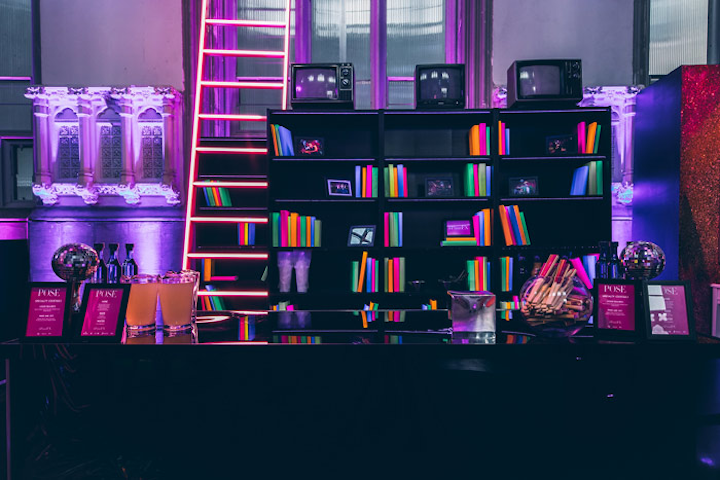 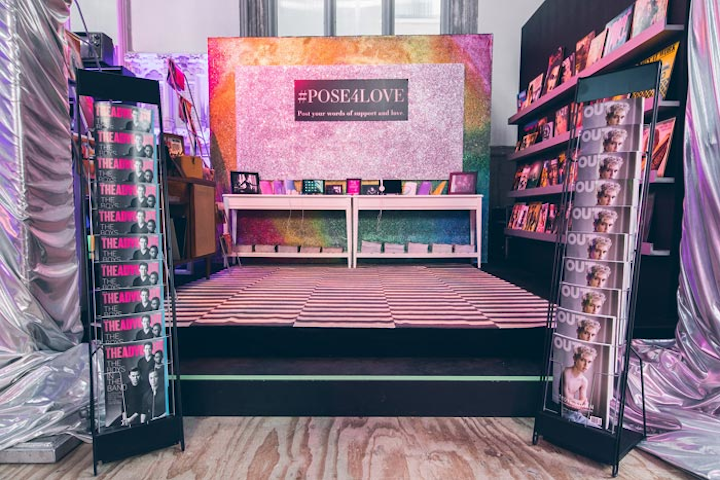 At the #Pose4Love activation, guests could watch messages of positivity recorded by cast members. They could also write positive messages of their own and post them on the wall; the messages will be shared with members of L.G.B.T.Q. organizations.
Photo: Sean Smith 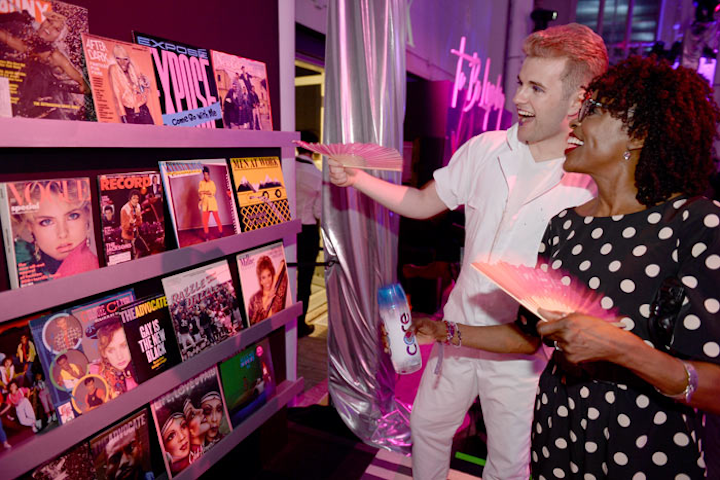 To further create a sense of nostalgia, the venue displayed magazines and records sourced from the decade.
Photo: Andrew Toth/Getty Images for FX Networks 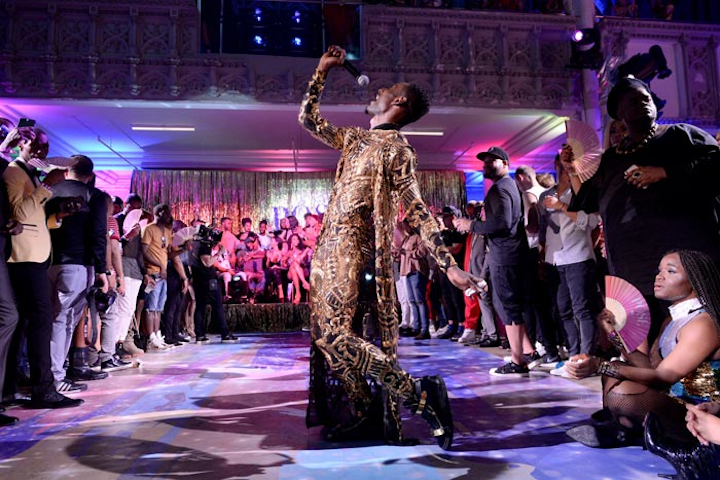 The main event was an authentic ball, which was emceed by professional vogue instructor Dashaun Lanvin.
Photo: Andrew Toth/Getty Images for FX Networks 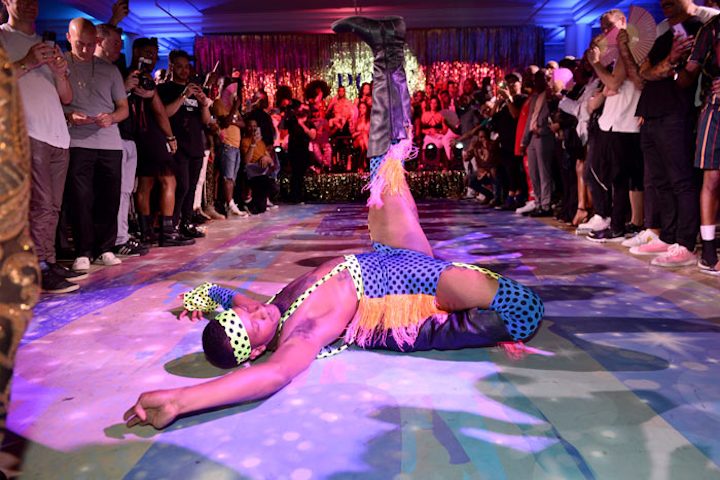 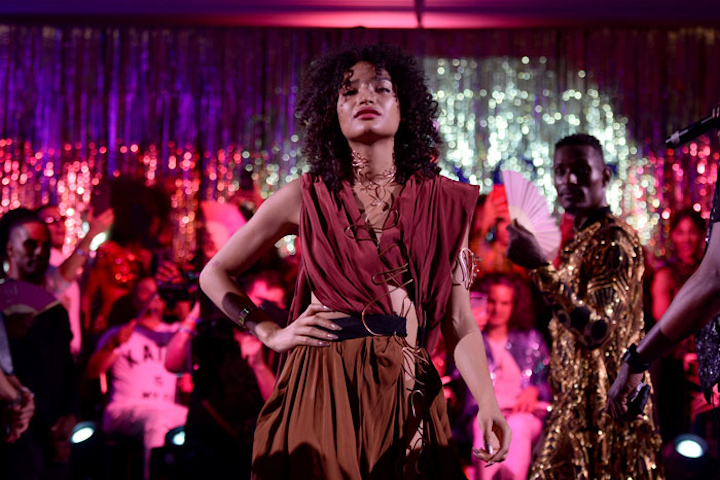 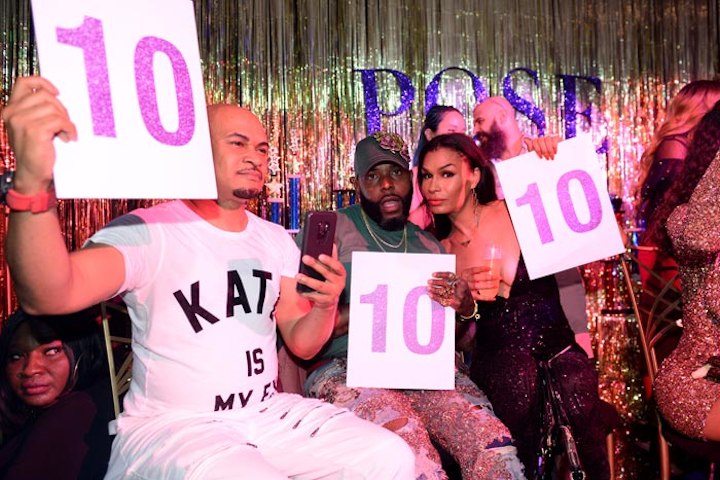 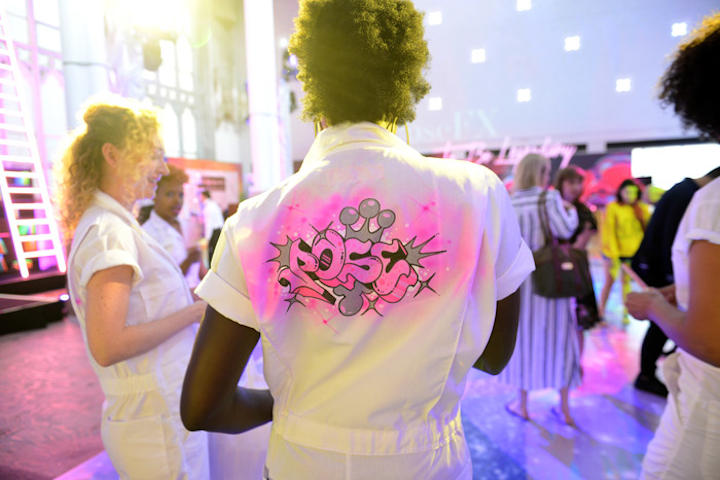 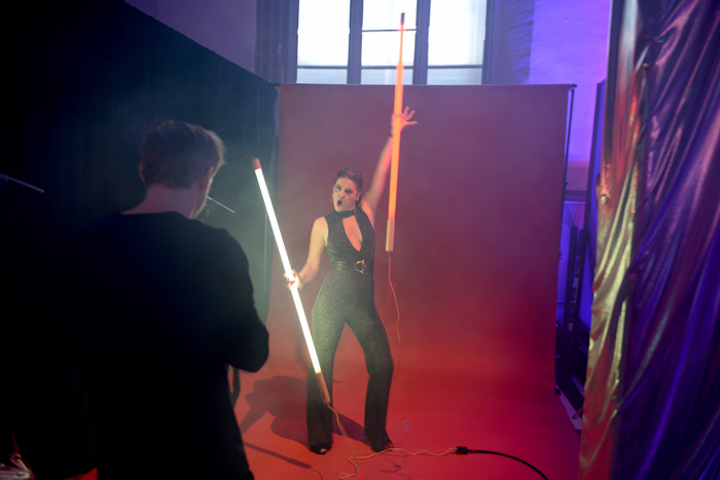