This Holiday Lego Mural Was Created With More than 663,500 Bricks

Over three weeks, the Toronto community was invited to help build the mural, which was recently unveiled at the Holiday Fair in Nathan Phillips Square.

To celebrate the brand’s 60th anniversary and the diversity of Canada, Lego recently unveiled a massive mural created with 663,552 bricks. The mural, which Lego Canada has billed as the largest Lego mural in the Western hemisphere, was unveiled at the third annual Holiday Fair in Nathan Phillips Square in Toronto on December 4.

Planning began for the creation of the Lego Mystery Mural in August as a collaboration among Lego Group and the Lego Model Shop, B Street Toronto, Initiative media agency, and Flashpoint Public Relations. “The activation symbolizes limitless creativity of what can be accomplished if people have fun building together,” said Raquel Faria, marketing director for Lego Group.

From November 12 to December 2, passersby were invited to help build the 18,432 Lego baseplates that were needed to create the mural, which stands in front of Union Station. For each baseplate completed, Lego Canada donated a Lego set to the Toy Mountain campaign to help children in need this holiday season.

Several considerations were taken into account when planning the activation, including how to structure a mural that is weatherproof and how to secure security for the structure. The completed mural, which stands at just over 40-by-20 feet, depicts a colorful holiday setting in Toronto with classic Lego figures, a Canadian Lego hockey player, and Canadian animals. The mural images change depending on the angle it’s viewed from; Faria noted there are eight changes. The mural also stands next to a 10-foot, 3-D Lego fireplace.

The mural is on display at the fair, which supports Epilepsy Toronto, through December 23. 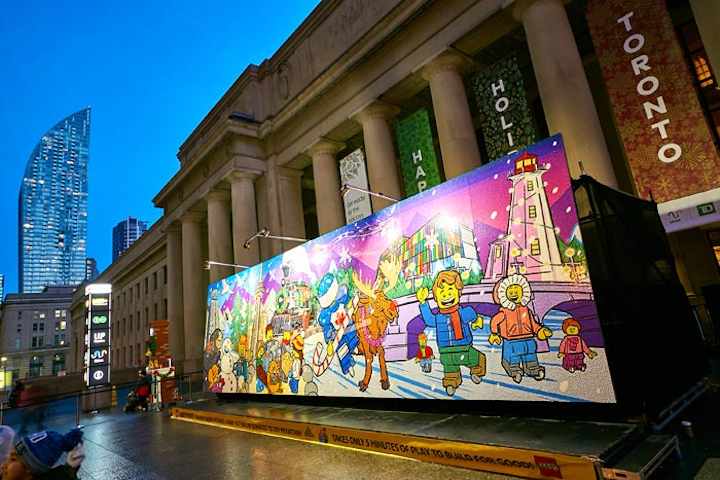 The 40-by-20-foot mural depicts a holiday scene in Toronto, with classic Lego figures, a hockey player with a candy cane, and animals including a moose and a beaver.
Photo: Dale Wilcox/AP Images for LEGO Canada 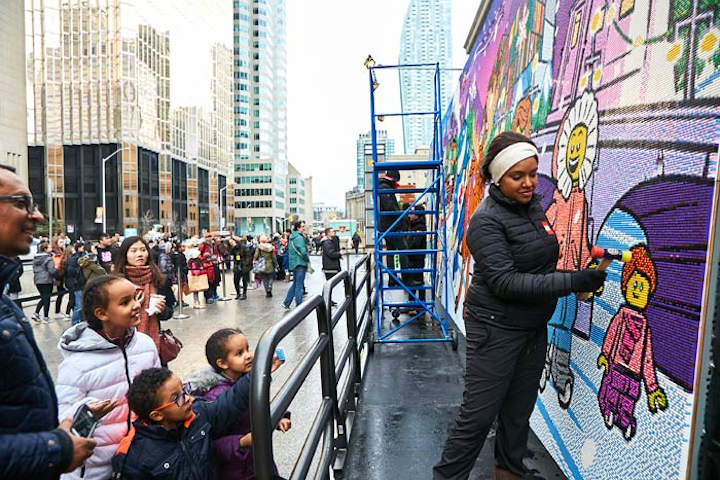 For three weeks leading up to the mural reveal, families were invited to help build one of the 18,432 Lego baseplates needed to create the mural.
Photo: Dale Wilcox/AP Images for LEGO Canada
More in Event Design