Prehistoric Party: How the Smithsonian Celebrated Its Renovated Fossil Hall

Catering, projections, and decor brought guests at two major events into the age of the dinosaurs. 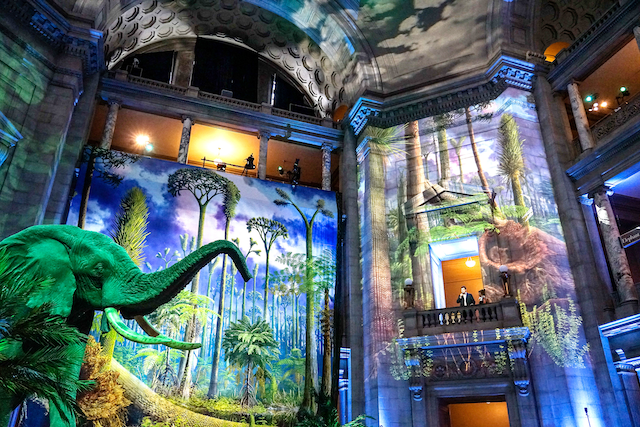 Vivid projections and a printed mural transformed the rotunda space, recalling an ancient ecosystem. They framed a doorway and balcony from which speakers addressed the guests.Photo: Juan Carlos BricenoWASHINGTON—The "Nation’s T. rex" is back on display in Washington: The Smithsonian National Museum of Natural History's beloved fossil hall reopened this June after a five-year, $110 million renovation. Before museumgoers lined up to see the David H. Koch Hall of Fossils—Deep Time, the Smithsonian hosted two evenings of celebrations for the big opening.

The Smithsonian National Museum of Natural History's rotunda transformed into a jungle for a private donor dinner for 135 guests and then a grand opening cocktail reception for 600 guests, complete with tropical greenery and projections with swooping pterodactyls. "There was a gigantic printed piece of fabric that featured one of the murals from the actual fossil hall that shows a carboniferous forest. The idea was to try to make you feel like you were in that forest on both of the nights," explained Tina Karl, the museum's director of special events.

What to serve at a dino-theme party? Occasions Caterers found a way to play with the prehistoric theme in an elegant way. Example: dishes like bone marrow and cauliflower and white truffle pots de crème in a buffet station called "Ancient Grains, Bones and Skeletons."

"We worked closely with the event team at the Natural History Museum to avoid clichés and focus on science and education," Occasions Caterers co-founder and creative director Eric Michael explained. "We went into the project knowing that we wanted to create a sophisticated experience for guests and not a cartoonish one."

Before the curtain opened to reveal the fossil hall, guests at the cocktail reception explored the first floor of the museum in stations that played with extinct creatures' diets. "We had a great time researching and crafting dining experiences which were relevant to the exhibition. Having herbivore and carnivore stations seemed a natural," Michael said. The seated dinner's menu reflected that research too. "We also created a plated first course which reflected the grazing diet of forest-dwelling dinosaurs," he said.

Occasions Caterers' creativity inspired desserts like a "Woolly Mammoth Shaved Ice Station" and a "La Brea Tar Pit" with a vat of molten bittersweet Belgian chocolate and brownie bites for dipping. Another interactive dessert wowed during the seated dinner. "We created an interactive dessert for the gala dinner which allowed guests to play the role of an archeologist and 'discover' an ammonite fossil. Guests were amazed and delighted," Michael said. "It was so satisfying to watch everyone pull their phones out to take pictures!" 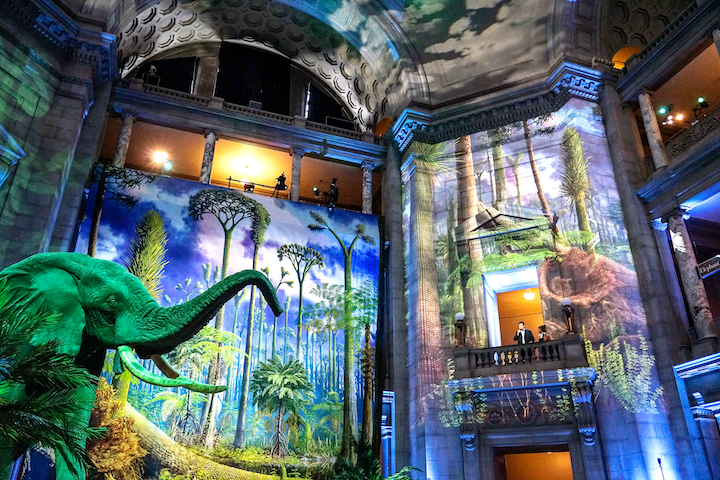 Vivid projections and a printed mural transformed the rotunda space, recalling an ancient ecosystem. They framed a doorway and balcony from which speakers addressed the guests.
Photo: Juan Carlos Briceno 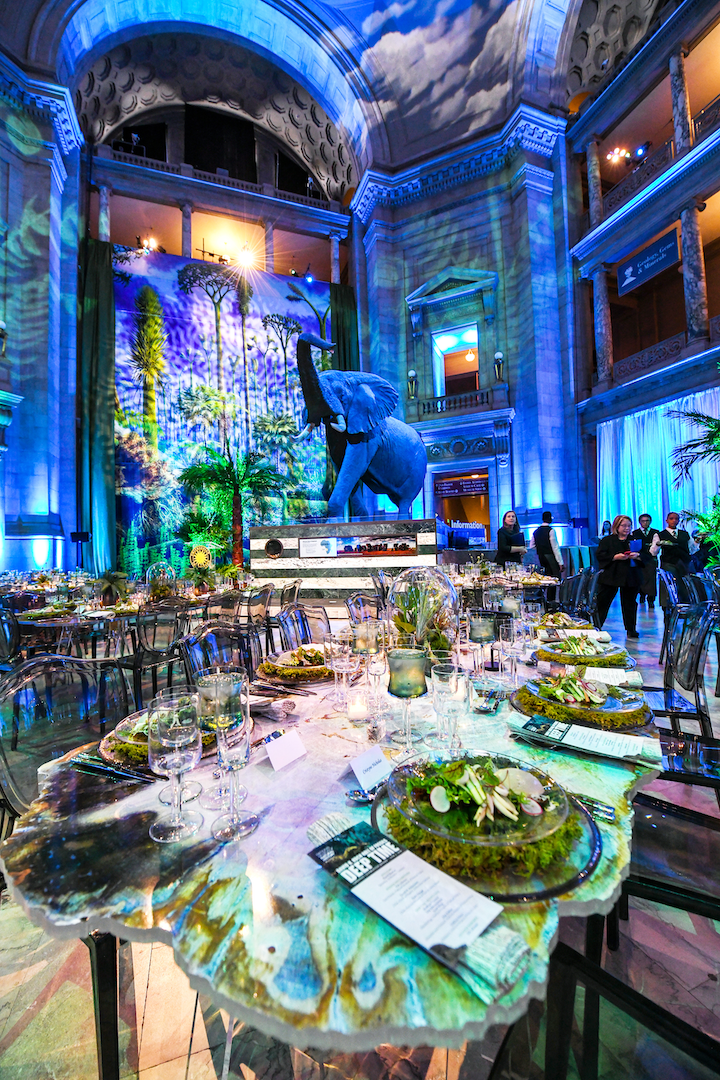 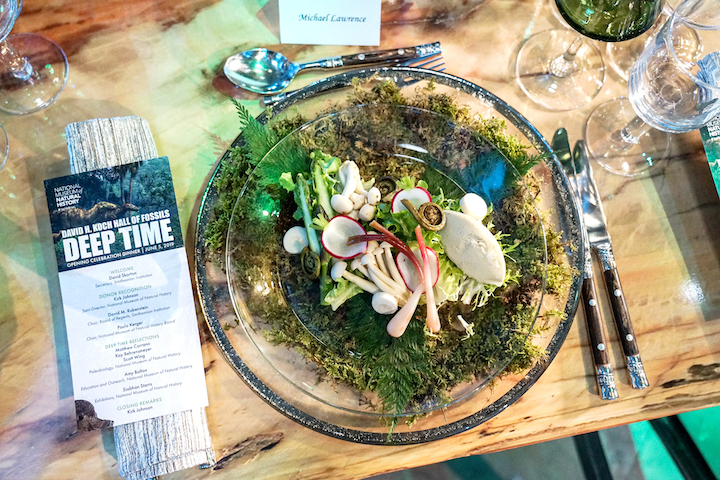 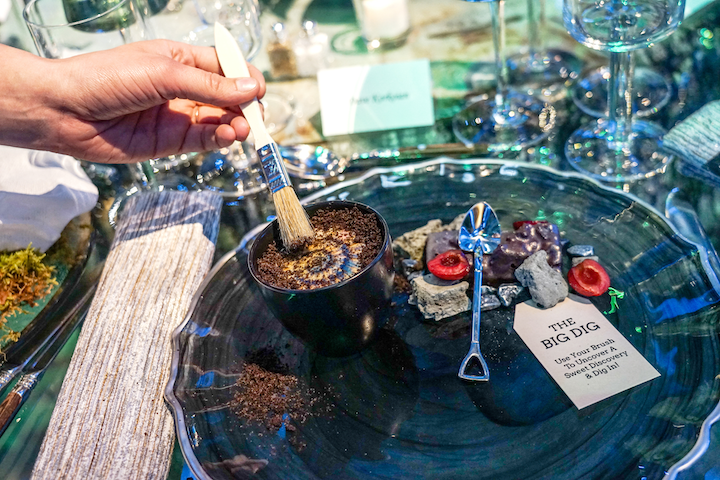 Guests played paleontologists for dessert. Every dish included a brush and a tiny shovel, so guests could excavate a layer of chocolate dust to discover a chocolate disk with an image of a fossil. Under the disk was a sweet treat with chocolate sponge, ganache, Morello cherry mousse, cherries, and whipped cream.
Photo: Juan Carlos Briceno 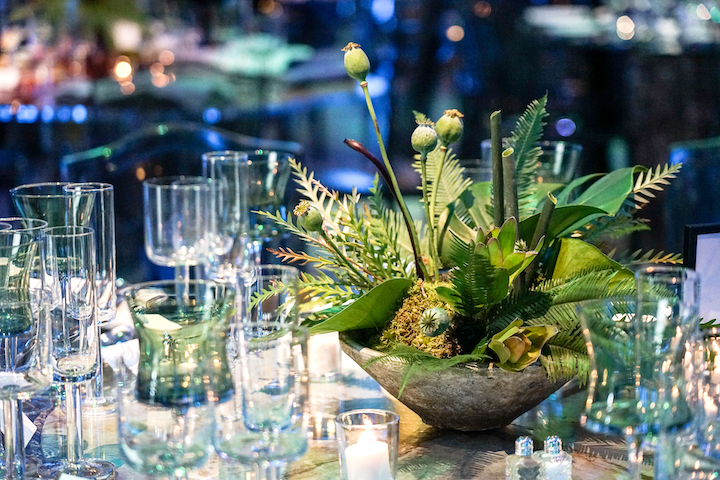 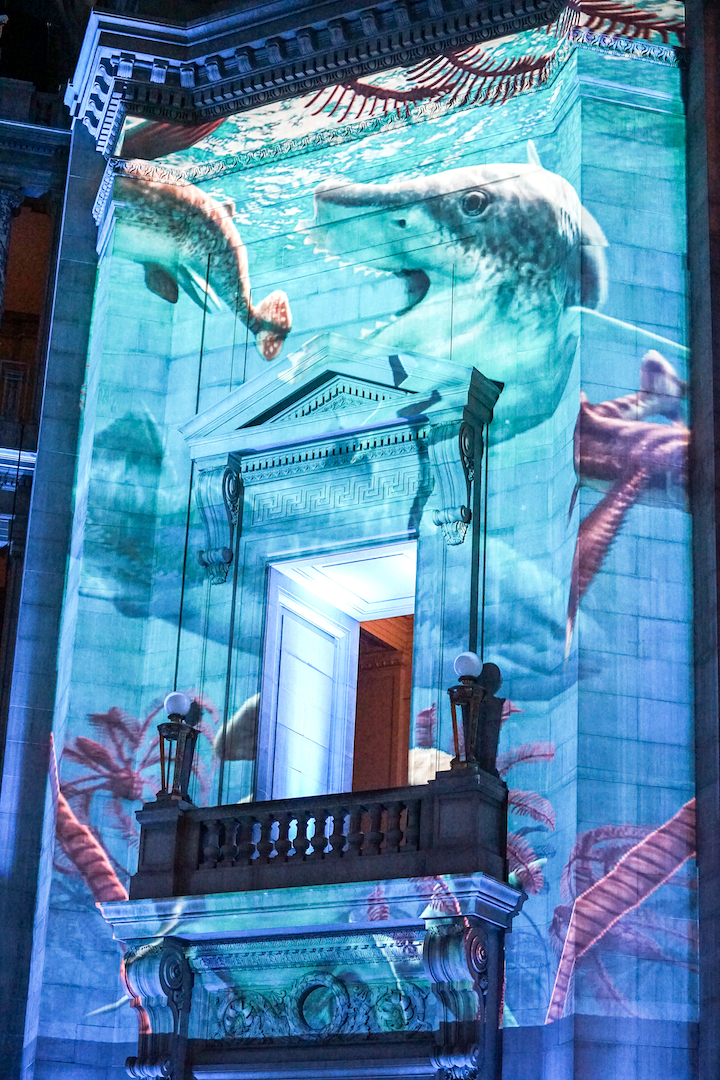 Projections on the walls during the dinner depicted scenes of the extinct world that visitors learn about in the exhibit, including marine life.
Photo: Juan Carlos Briceno 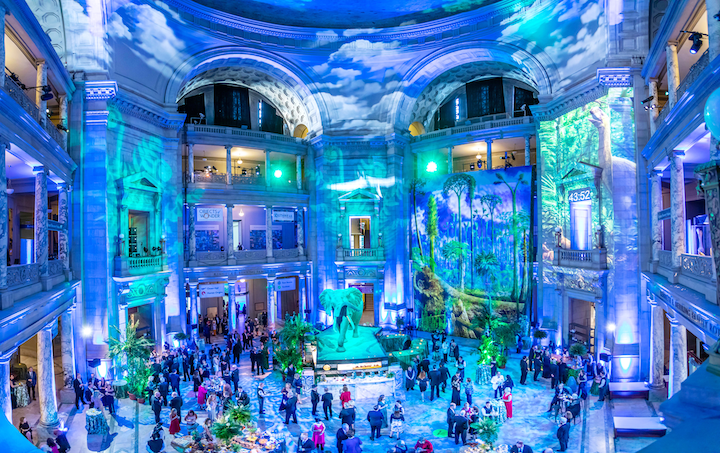 The cocktail reception also featured projections. For the three nights before the gala, Control Video worked after the museum closed to use image mapping on the rotunda's architecture. The result showcased multiple artist renderings of prehistoric times.
Photo: Pepe Gomez 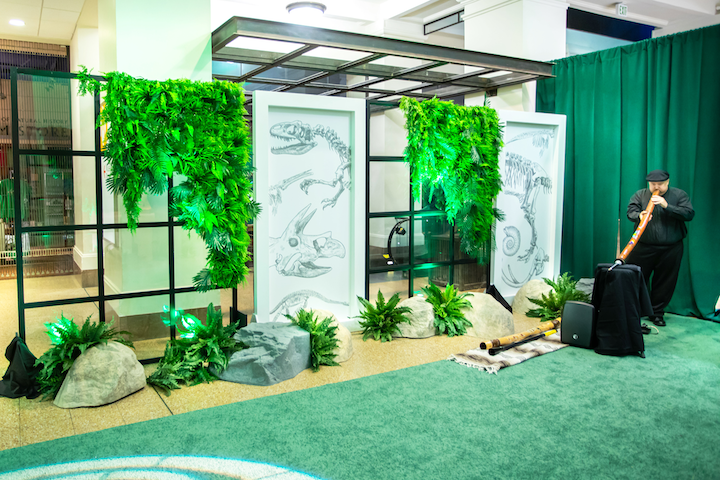 A performer played a didgeridoo on the museum's green carpet during the reception.
Photo: Pepe Gomez 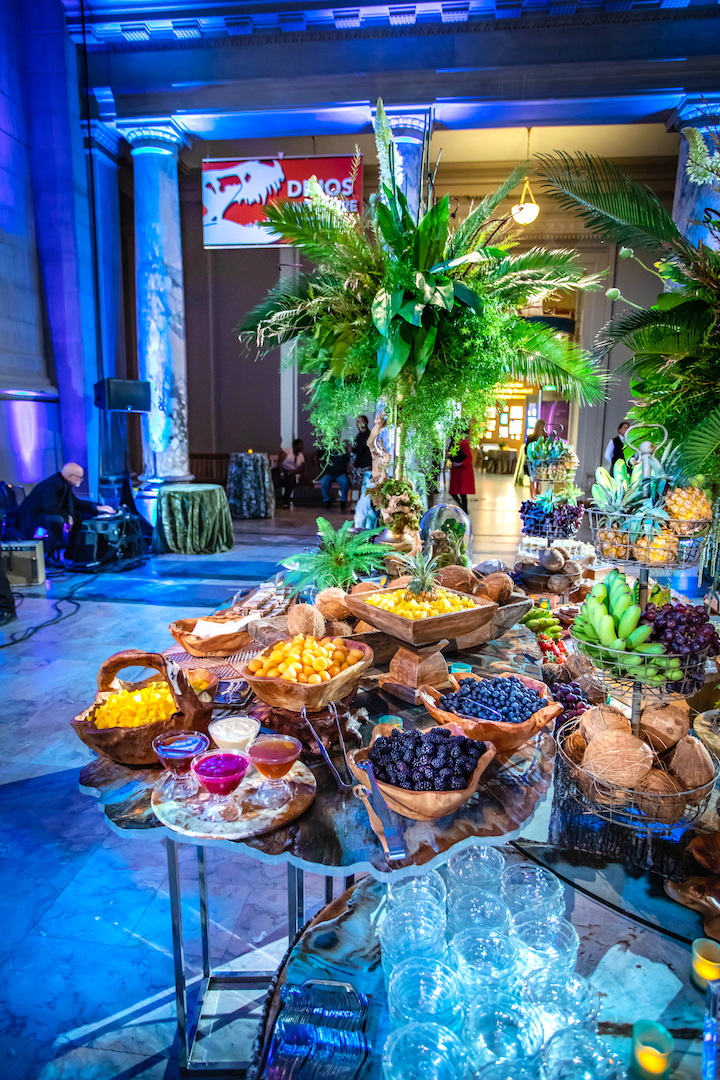 The museum's rotunda felt like a jungle, thanks to an abundance of greenery. A buffet was set up to resemble an archaeologist's base station in Khartoum, with vibrant displays of tropical and Middle Eastern fresh fruit displayed as a fruit market at the souk.
Photo: Pepe Gomez 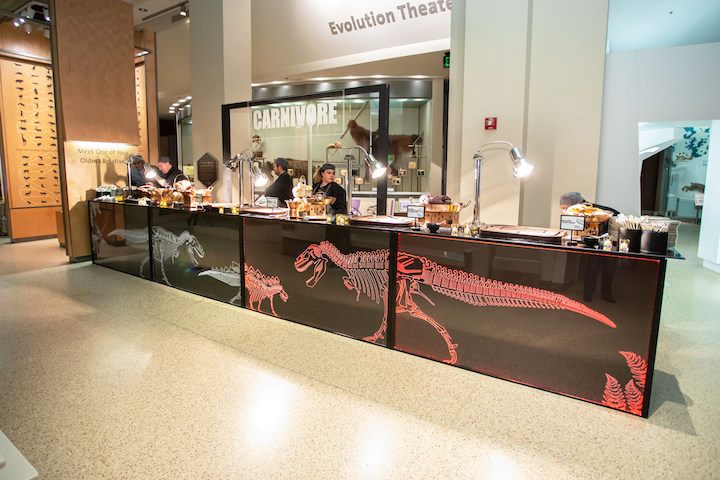 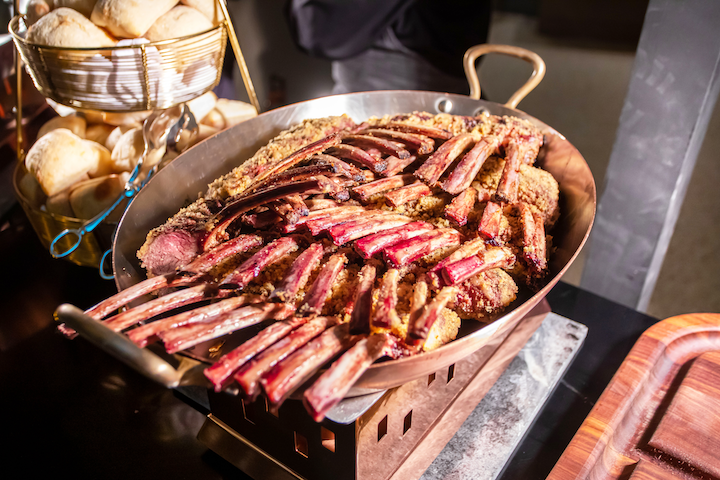 The Carnivore Station featured meat dishes a T. rex would love, like a rosemary lamb rack roasted until medium-rare, then carved into chops and served with mint-pine nut pesto.
Photo: Pepe Gomez 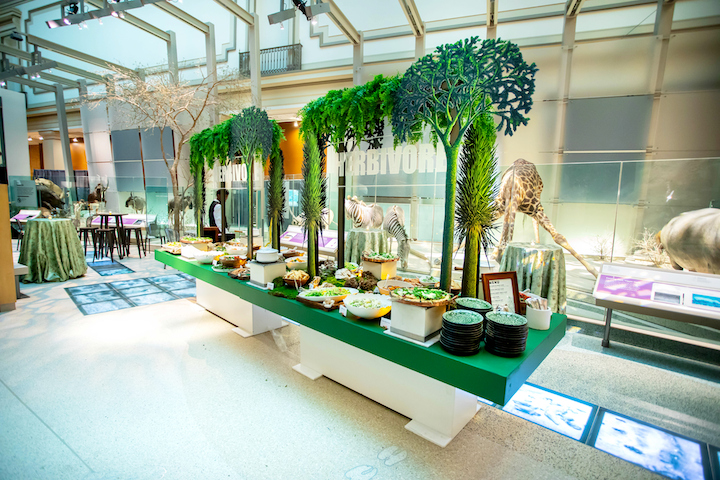