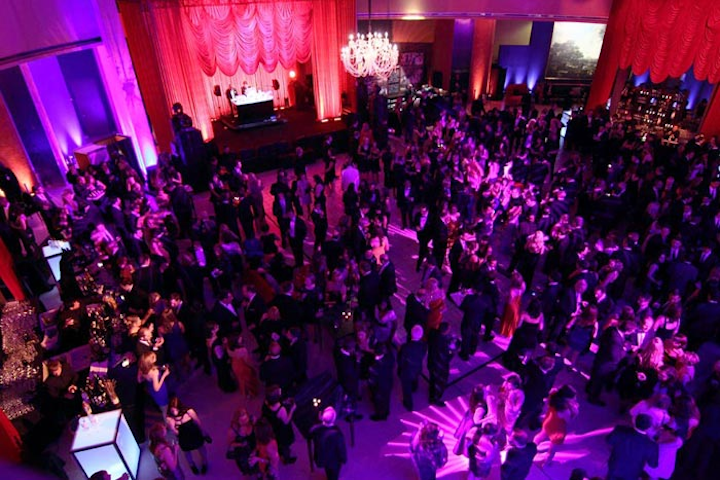 Two new parties—one hosted by Google and The Hollywood Reporter, the other by NPR— join a packed slate of parties surrounding the White House Correspondents' Dinner this weekend. One of Washington’s biggest weekends includes pre- and post-parties, cocktail receptions, and brunches, not to mention the actual dinner Saturday at the Washington Hilton Hotel. Jimmy Kimmel will M.C. the dinner, hosted by the White House Correspondents Association, and President Obama is scheduled to speak. Media outlets who have purchased tables fill them with a mix of celebrities and politicians: Picture Sofia Vergara and New Jersey Governor Chris Christie at ABC’s table, or the Huffington Post table with Glee’s Darren Criss and Senator Rand Paul of Kentucky.

While a ticket to the actual dinner is tough to get, those relegated to watching the dinner live on C-SPAN can still snag an invitation to the parties this weekend. Here’s a roundup of what’s happening around town:

Events kick off Thursday with a private dinner from the Creative Coalition celebrating Leading Women in Media. Hosted by Lanmark Technology Inc. and Elle at the Ritz-Carlton, Capital Decor & Events by Kelly B. Jenkins will provide decor and event production; gift bags are from NeuProfile. The event’s after-party—"Off the Record" with Rock the Vote—will take place at the home of Lanmark president and C.E.O. Lani Hay. DJ Mia Moretti and Caitlin Moe as well as Sam Trocki will perform, with a menu from Well Dunn Catering. The omnipresent Georgetown Cupcake will provide dessert for both events.

Friday, Google and The Hollywood Reporter have invited bigwigs from politics, technology, and entertainment to the W Hotel. The event, a first for the companies, will be hosted by Google executive chairman Eric Schmidt and Hollywood Reporter editorial director Janice Min. Also at the W, The New Yorker will host a rooftop party hosted by editor in chief David Remnick.

NPR’s affair, dubbed "Friday Night Spin" and hosted by the station's White House correspondent, Ari Shapiro, invites guests to the Gibson Guitar Showroom. Solange Knowles, sister of Beyoncé, will DJ and guests will take dessert to go, with Georgetown Cupcake providing take-away treats. Over at the St. Regis, Time Inc. and People's annual party is being produced for the fourth year by Syzygy Event Productions and decor will feature tone-on-tone grays with a pop of yellow, as well as ikat and other patterns.

Voto Latino will hold its second Emerging Voices in Media event at the Hay-Adams Hotel. Actress Rosario Dawson will host, and guests include Huffington Post founder Arianna Huffington, MSNBC president Phil Griffin, and BET C.E.O. Debra Lee. The event starts with a panel discussion in the afternoon followed by dinner and a party.

Atlantic Media owner David Bradley and his wife, Katherine, will host a welcome dinner at their home. AtlanticLIVE is planning the event, with Susan Gage Caterers handling the catering and decor, flowers from Ociana, lighting from Frost Lighting, and tenting from Loane Bros. The Atlantic’s entertaining continues later that night with the First Amendment Party, co-hosted by the National Journal, Funny or Die, and Impact Arts & Film Fund at event space 1800 L Street NW. Lyn Stout of Bond Events is handling the event production and design, with Kimball Stroud and Associates managing the event. It will have catering from José Andrés' Think Food Group, a photo booth from Onomonomedia, an art vending machine from Art-o-Mat, and entertainment from DJ The Plug Agency.

Saturday kicks off with a garden brunch at the Beall-Washington House hosted by Tammy Haddad and others, including BizBash C.E.O. David Adler. The event supports Cure Epilepsy and the White Ribbon Alliance.

Several media outlets will host pre- and post-dinner cocktail receptions at the Washington Hilton including Thomson Reuters and another co-hosted by The Atlantic, National Journal, and CBS News.

Claire Danes will host Capitol File’s after-party at the Newseum. Gala Design Group is producing the event, which features Wolfgang Puck Catering, Bialek Music's Bryan Hoover as DJ with saxophonist Tim Murphy. Vanity Fair/Bloomberg’s after-party will take place at the French ambassador’s residence, while the Italian Embassy will see the after-party for NBC and MSNBC. Dufour & Co Productions is producing that event with a menu from Occasions Caterers.

Sunday highlights include two brunches. John McLaughlin and Reuters editor in chief Stephen Adler are hosting a brunch on the Hay-Adams Hotel roof terrace. Politico publisher Robert Allbritton is hosting a brunch at his Georgetown home, where guests will mingle in a tent adorned with floral textiles and fresh peonies and orchids. Wolfgang Puck’s The Source designed a menu that will include made-to-order steak and eggs, a raw bar, and butler-passed hors d’oeuvres. Drinks include fresh squeezed juices and fruit-infused waters.