The conference's welcome and networking began at the airport. 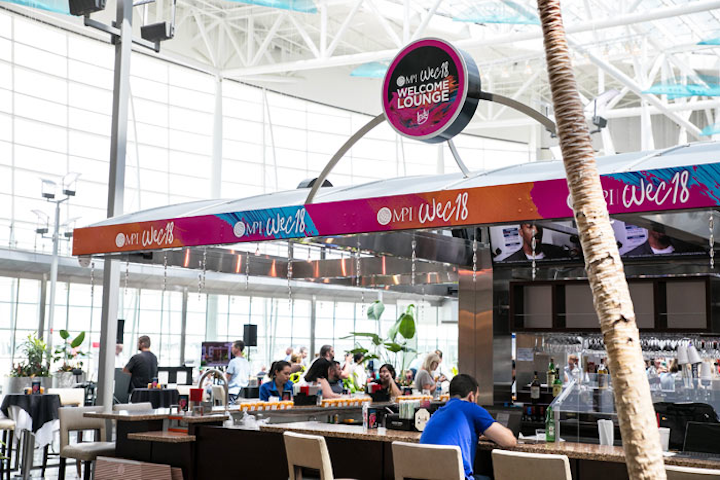 M.P.I. took over an airport bar and turned it into a welcome lounge for attendees.
Photo: Courtesy of M.P.I.

When the city of Indianapolis hosted Meeting Professionals International’s World Education Congress in June with the theme “WEC18: Redesigned for Maximum Experience,” M.P.I. and the city’s tourism authority Visit Indy decided to put that theme into play even before the start of the program—at the airport, in fact.

Working with the Indianapolis Airport Authority and Visit Indy, M.P.I. took over an existing bar and rebranded it as the WEC Welcome Lounge.

“When we first had the idea of building out a welcome lounge, we decided on having it in the one location where all the terminals come together so attendees could see it as soon as they came in,” said Melinda Burdette, the organization’s director of events. “We worked with the Indianapolis Airport Authority for permission to take over an existing bar, covered the name, and rebranded it. It created incredible networking space and provided a great start to the week.”

Burdette acknowledged that not every group could pull off such a stunt at an airport, but it helped that Indianapolis authorities understood the value of having so many meeting planners in their city.

To execute the idea, the M.P.I. team gathered information on when the bulk of attendees would arrive into the city (Friday morning before the event) to determine when the lounge would open. Attendees also could pick up their badges on site, helping to ease lines at the conference’s eight hotels and at the convention center.

“We also asked ourselves what sort of experience we wanted them to have at the lounge, so we had local beer, wine, and popcorn available, and we also had Wi-Fi so many of them stayed and worked with like-minded people or waited for their friends,” Burdette said. “Some people figured their hotel rooms wouldn’t be ready that early, so it would be a good place to work or relax.”

Because the Indianapolis 500 had just taken place at the end of May, there were still race cars in the terminal Burdette said made for Instagram-worthy photos.

“One gentleman sat at the lounge the entire day saying, ‘I have space to work, snacks and drinks. What more do I need?’” said Burdette. “It was a great opportunity for us to set the tone, to show that midwestern hospitality.”

At the end of WEC when guests arrived at the airport, volunteers at the lounge gave out vouchers for water guests could redeem once they passed through security. “We wanted them to feel welcome from beginning to end,” said Townsend.

“It’s hard to get meeting planners outside of their own head. It made them put on the attendee hat. They are always absorbing experiences and learning from them, and at M.P.I. we like showcasing what other meeting planners can do. And we hope we gave them some inspiration about doing registration at the airport or thinking about giving out vouchers to attendees, something you can do in any airport.”