Rammy Revelers on Their Favorite Haunts, Industry Gossip, and a Cooler Venue 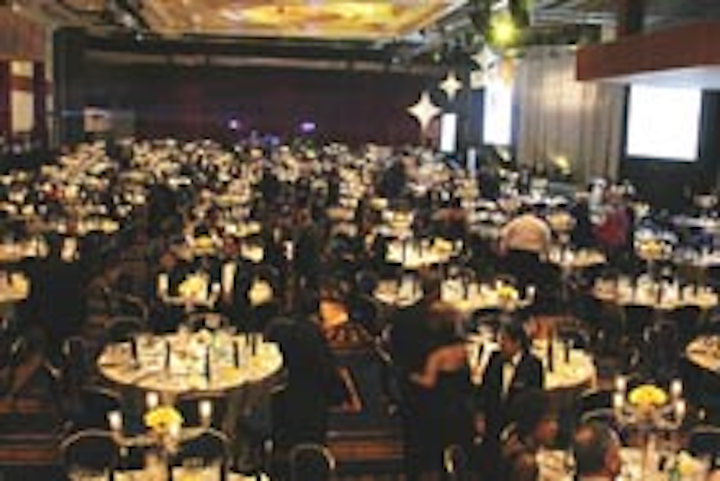 The Rammy Restaurant Awards at the Marriott Wardman Park
Photo: The Photographers Gallery
The Restaurant Association Metropolitan Washington held its 26th annual Rammy award show at the Marriott Wardman Park last night. The black-tie event brought most of the city's chefs and foodies—1,600, to be exact—under one roof. After the ceremony (and a few cocktails), we asked guests about the new restaurants they love, D.C. chefs, and their favorite nominees.

"I love [this event]. I never actually knew something like this happened in D.C. I didn't know the city had such a good foodie culture, and it's pretty amazing to see.”
—Spike Mendelsohn, contestant on Top Chef and owner of soon-to-open Good Stuff Eatery

"Oh, boy. I have to say my favorite that's opened recently is Proof. Another restaurant that I really like is Rasika. [This year's event] actually seems a little more organized and a little more elegant [than in years past].
—Jamie Leeds, co-owner, Hank’s Oyster Bar (winner of 2008's Neighborhood Gathering Place of the Year) and soon-to-open CommonWealth“There’s much better temperature control. In the past couple of  years we were all melting at about this point. I think there's going to be some drama tonight. There are some chefs that have parted ways with the restaurants they were nominated for.”
—Amanda McClements, writer, Metrocurean.com

“[My favorite] would have to be Central [Michel Richard] or Proof. I love Michel. I love his style, but I think Haidar Karoum [of Proof] is doing wonderful things with Mediterranean cuisine. [For the Rammys], I'd say the food was fantastic, and everyone seems to be having a good time. I'm surprised I won. There really are some wonderful people in the pastry world and I'm proud to work with them."
—Heather Chittum, pastry chef, Hook, Pastry Chef of the Year

"The most gossip is definitely going to be about Barton Seaver winning Rising Culinary Star when he doesn't have a kitchen to go to right now. He left his position at Hook mere days before winning for his time there, and I think people are going to have a lot to talk about."
—Erin Hartigan, D.C. editor, DailyCandy

"This is my first time coming. I didn't go last year because I was on vacation. [It's great to see an event] bringing the city to a culinary place where it should be, on par with New York and L.A. I just get a kick out of it."
— Amy Brandwein, chef, Fyve at the Ritz-Carlton Pentagon City, 2007 nominee for Rising Culinary Star of the Year

"It's definitely bigger, and it shows how much the industry has grown in the city. The first one had about 600 people, and it has grown by 1,000. We're veterans, man, or we're just old!"
—Ellen Gray, co-owner, Equinox Restaurant

"Brasserie Beck is my favorite [restaurant]. It's always crowded. I know that it sometimes seems like a bad idea, but you always meet so many interesting people and you always have a good time. [Chef and owner] Robert Wiedmaier has done an amazing job in the restaurant scene in D.C. this year.”
—Crystal DeClaire, Capitol Hill staffer