2014 Preview: 10 Most Anticipated Toronto Venues for Meetings and Events 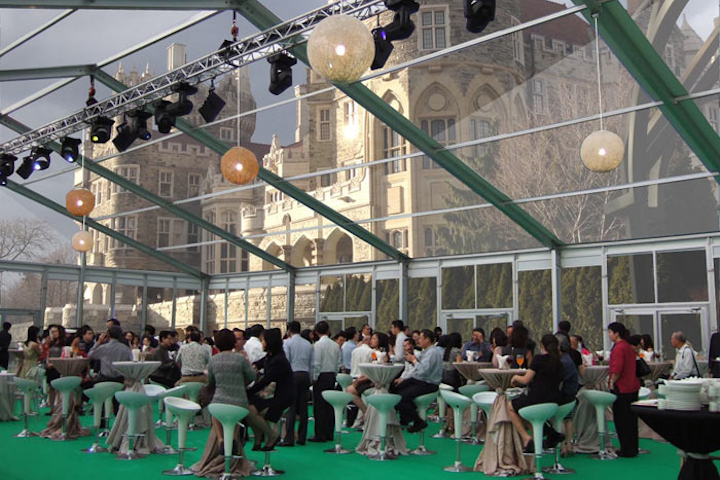 1. Liberty Entertainment Group is taking over operations management of Casa Loma, the Gothic Revival castle in Midtown, and plans to enhance the venue for special events. This spring, the venue will debut the Glass Garden tent, a clear structure that will offer views of the castle and the Toronto skyline. It will seat 200 guests banquet-style or hold 500 guests for receptions. Liberty will also introduce a new fine-dining concept later in the year.

2. Wahlburgers, the burger chain from actor Mark Walhberg and his brother Donnie, opens soon at the SoHo Metropolitan Hotel. The chain already has its own reality show on A&E that follows the brothers as they launch various restaurants. In addition to burgers, it also will serves sandwiches, salads, and home-style sides such as "mom's macaroni salad," sweet potato tots, and fries and onion rings. Desserts include alcohol-spiked ice cream frappes.

3. The Theatre Centre will move to a new home in the historic Carnegie Library early this year. Following a $6.2 million renovation, the arts venue will include nearly 12,000 square feet of space split into a main performance hall that seats 200, a lobby café, a rehearsal hall, a gallery space, a greenroom, a green-roofed terrace, and office space.

4. As part of its overhaul of its dining options, Toronto Pearson International Airport is adding several restaurants in 2014 and 2015. Among the seven concepts recently announced are: Asian Kitchen by Susur Lee, a French-Asian bistro; Bar 120, a molecular gastronomy concept from Toronto's John Placko; and chef Lynn Crawford's the Hearth, serving hearth-fired flatbreads, salads, sandwiches, and small plates.

5. The International Centre plans to finish a $4.5 million renovation this summer. The improvements include a renovated main entrance to Hall 1 that itself can be used for events, plus a new connection between Hall 4 and Hall 5 that can be used for registration, receptions, booths and displays, and lounge areas for food and beverage. All exterior main entrance and hall signage will be replaced with color LED screens. The 100,000-square-foot Hall 5 is the largest column-free space at the International Centre. The Hall has holds 7,020 for a banquet or 572 trade show booths. In total, the International Centre has more than 548,000 square feet of exhibition space.

6. Chill Ice House, billing itself as the first permanent ice lounge in Canada, is planning a late-March opening. The venue, with seating, bars, and other decor carved from ice, will be available for private events of as many as 150 guests. It will also include a private "warm room" in the back.

7. The Kensington Brewing Company is opening a new production brewery, retail store, and 30-seat bar in Kensington Market this summer. The independent craft brewer will take over the former Electric Theatre space and incorporate shipping containers into the design. On-theme decor elements will include light fixtures made from old kegs.

8. The tequila bar El Caballito opens downtown February 5. It will seat as many as 120 people and will have private tasting rooms available for booking. This summer the bar will open a 1,800-square-foot patio, expanding the space by 100 seats as well as offering a bar and a make-your-own taco station. Los Colibris, the upstairs restaurant space, will open later in the year, offering upscale Mexican dining with 150 seats and two private dining rooms.

9. Scaddabush Italian Kitchen & Bar soon will open a second location following a debut in Mississauga in July. The menu—based on feasts with “a little of this and a little of that”—will offer shareable dishes including pizzas, meatballs, and house-made mozzarella.

10. The casual restaurant Rose City Kitchen is planning to open in early February. The concept will create its own spin on Mediterranean cuisine by combining the best elements of Lebanese, Greek, Egyptian, and Moroccan food as well as freshly baked bread. The space will seat 20 guests and include a 20-seat seasonal patio; it will also cater events.