The James Beard Awards returned to Lincoln Center’s Avery Fisher Hall on Monday to celebrate the latest crop of culinary award winners, as well as the James Beard Foundation’s silver anniversary. This year’s theme, “25 Years of Food at Its Best,” was chosen to honor Beard’s legacy and America’s diverse culinary heritage, with a selection of dishes inspired by historic recipes pulled from the more than 20 cookbooks Beard authored.

“It’s symbolic of the enduring influence our foundation has had on recognizing the best of the best in our food world,” said foundation president Susan Ungaro, "especially the chefs and restaurants that have made the greatest impact on American cuisine."

The 6 p.m. award ceremony, once again hosted by celebrity chef Alton Brown, drew a sold-out crowd of over 1,800 guests, including 50 culinary students who were offered tickets at a reduced price of $53 (general-admission tickets sold to the public for $475 each). Winners included Daniel Humm (of New York’s Eleven Madison Park) for Outstanding Chef, Christina Tosi (Momofuku Milk Bar) for Rising Star Chef, Grant Achatz’s Next in Chicago for Best New Restaurant, and Michael Anthony (Gramercy Tavern) for Best Chef of New York City.

This year the foundation added a new award category, Outstanding Bar Program, which was given to New York speakeasy PDT. In honor of the milestone year, several special presentations were woven into the ceremony, including an excerpt from a one-man show based on the life of James Beard. There was also the presentation of a cake in the shape of the James Beard House, created by Duff Goldman of Food Network’s Ace of Cakes (it was later served during the reception).

About an hour before the three-hour program officially ended, hungry guests began wandering out to the hall’s lobby and grand promenade for the gala reception, where stations featuring dishes from 24 chefs were set up. This year, the foundation worked with gala co-chair chefs Larry Forgione and Joyce Goldstein to create the lineup of chefs. “[Forgione and Goldstein] had a special relationship with James Beard, and they helped select an extraordinary cast of chefs who either personally knew James Beard or say they were strongly influenced by him,” said Ungaro. “[Because the dishes were] inspired by recipes from James Beard cookbooks, each tasting had a delicious and interesting story behind it." For example, chef Gary Danko served buckwheat blinis with smoked salmon and Pacific Plaza caviar (from Beard’s New Fish Cookery), pastry chef Sarabeth Levine served strawberry shortcake (from The James Beard Cookbook), and Vitaly Paley of Oregon's Paley's Place Bistro & Bar offered Oregon Dungeness crab Reubens with Kohlrabi kraut, River's Edge caraway aged goat cheese, and Quinault River Steelhead caviar on rye brioche (inspired by James Beard's American Cookery).

Susan Wilber returned to handle the culinary coordination behind the scenes. The 66 sponsor- and chef-manned tables featured a strong lavender color scheme. “Chefs and sponsors have the opportunity to decorate their own station but were provided with lavender tablecloths and signage that served to unify the look and feel while leaving room for creativity and individuality,” said event producer David Bowen of Bowen & Company. Many of the tasting stations also incorporated lush, springtime floral arrangements.

As in past years, the event had a strong sponsor presence. Delta and Mercedes-Benz returned, as did Stella Artois, with its bistro-style bar, and Lavazza, with its espresso bars. “Technology played an important role in two of our new sponsors' activations,” said Bowen, referring to the Food Network & Cooking Channel's cupcake station featuring their new cupcake iPad app, and online food Web site Urban Spoon, which took over the outdoor lounge to display their new reservation software on iPads. The terrace lounge also featured live music by guitarist and singer Miss Tess.

Last year, the press room got a significant makeover from sponsor Groupon, but this year it returned to its regular few bars and food stations from the likes of the California Caviar Company and Perrier-Jouet champagne. Upstairs in the V.I.P. area on the mezzanine level, overlooking the grand promenade, 200 guests enjoyed a private, post-ceremony dinner at tables decorated with lilac linens, silver chiavari chairs, and quirky centerpieces of welded-together antique silverware and silver serving pieces in honor of the silver anniversary. 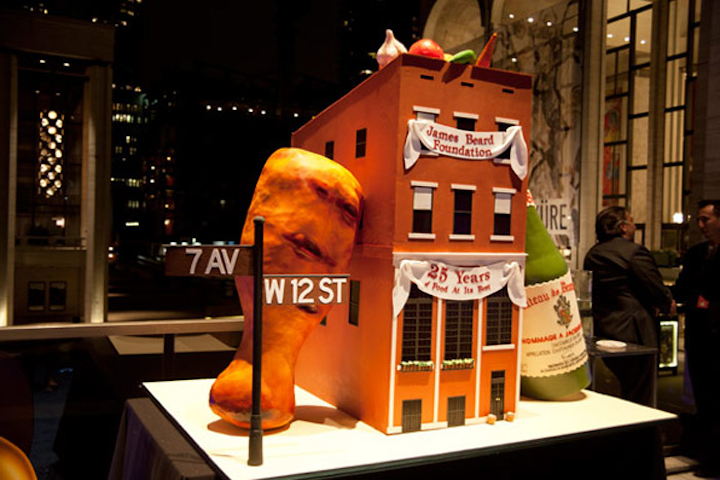 In honor of the James Beard Foundation's 25th anniversary, Duff Goldman of Charm City Cakes in Baltimore created a cake in the shape of the James Beard House in New York. After being presented during the ceremony, it was later served to guests in the Urban Spoon lounge on the balcony.
Photo: Sharokh Mirzai for BizBash 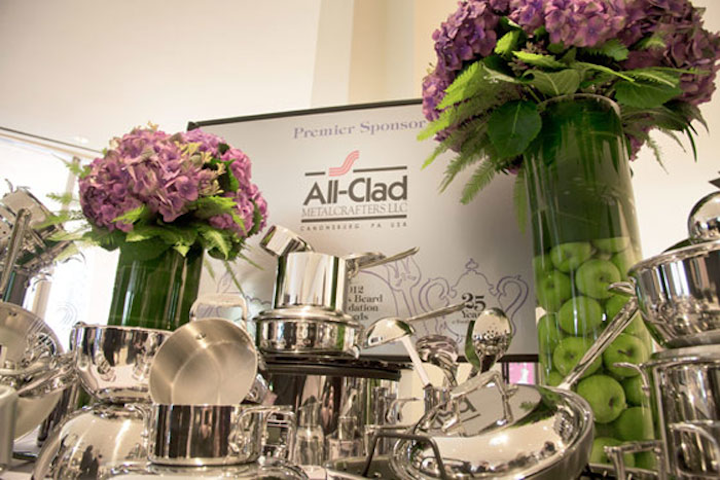 Sponsor All-Clad set up a display of their cookware next to the check-in station in the lobby.
Photo: Sharokh Mirzai for BizBash 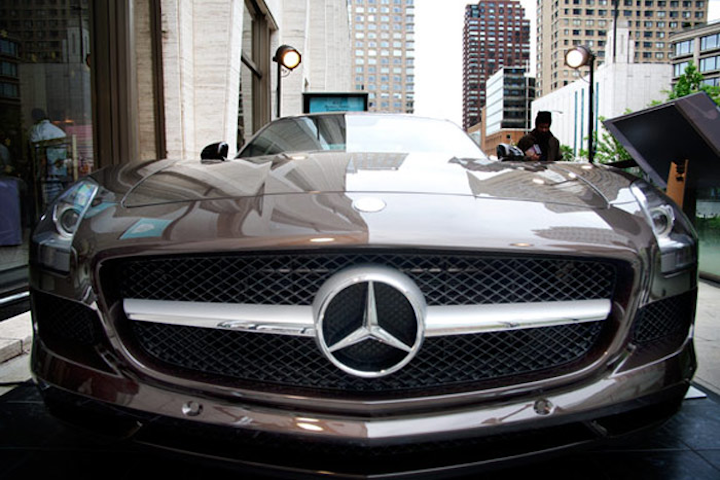 As in past years, Mercedes-Benz placed cars inside the lobby and outside near the arrivals area.
Photo: Sharokh Mirzai for BizBash 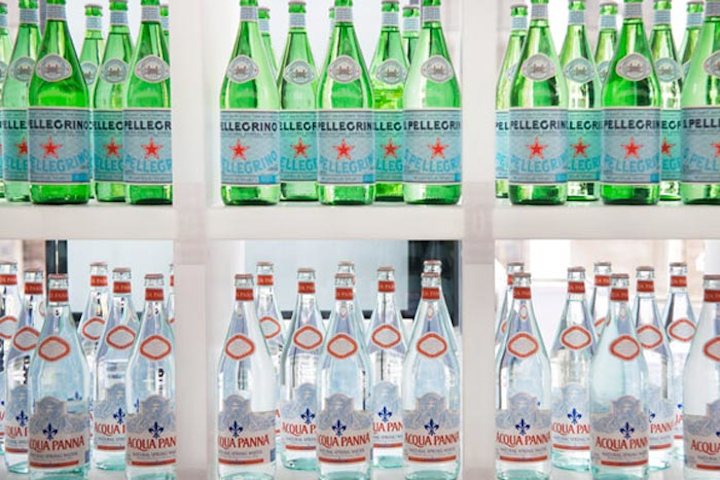 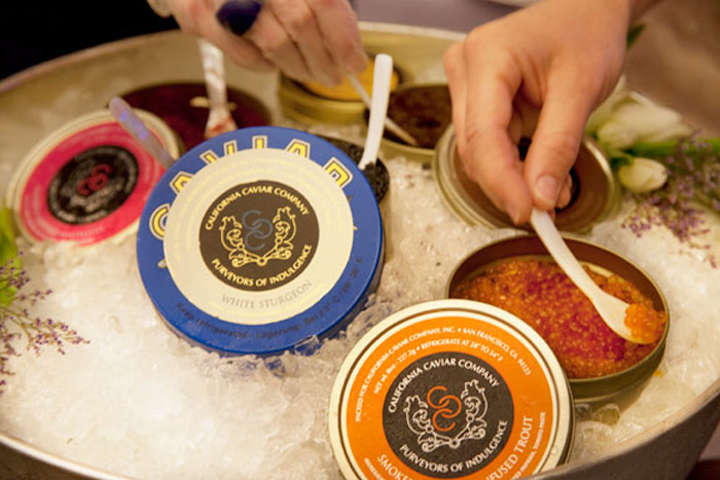 The press room returned to its regular setup of a few bars and food stations, which included a California Caviar Company bar offering canapes like saffron-infused whitefish roe on beet crisps.
Photo: Sharokh Mirzai for BizBash 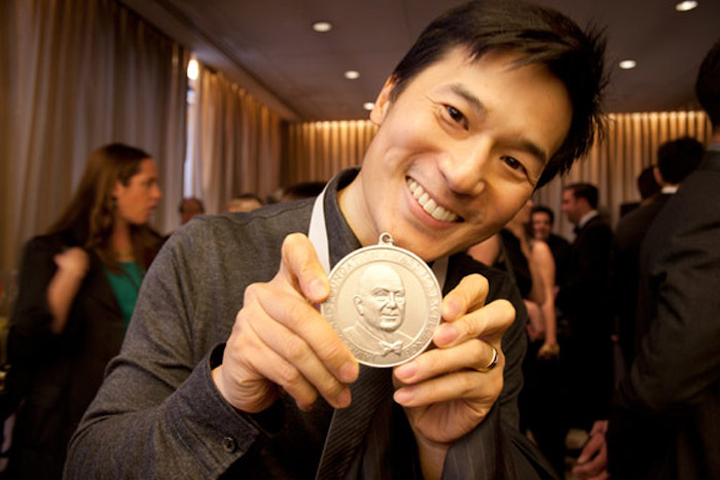 After accepting their awards on stage, winners headed to the packed press room to pick up a celebratory glass of Perrier-Jouet champagne and chat with journalists.
Photo: Sharokh Mirzai for BizBash 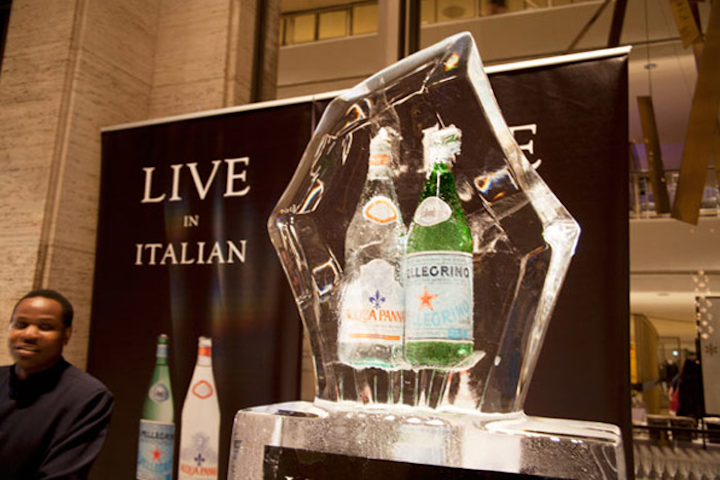 At the water bar on the terrace, Pellegrino and Acqua Panna displayed two bottles frozen inside an ice sculpture.
Photo: Sharokh Mirzai for BizBash 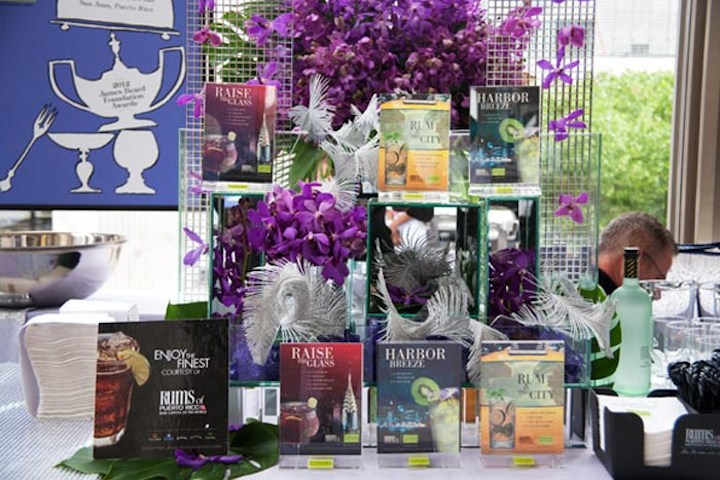 Each of the 66 sponsor- and chef-manned tables were covered in matching lavender linens. Purple signage designed by Pandiscio Co. added a graphic touch with illustrations of cutlery and serving pieces.
Photo: Sharokh Mirzai for BizBash 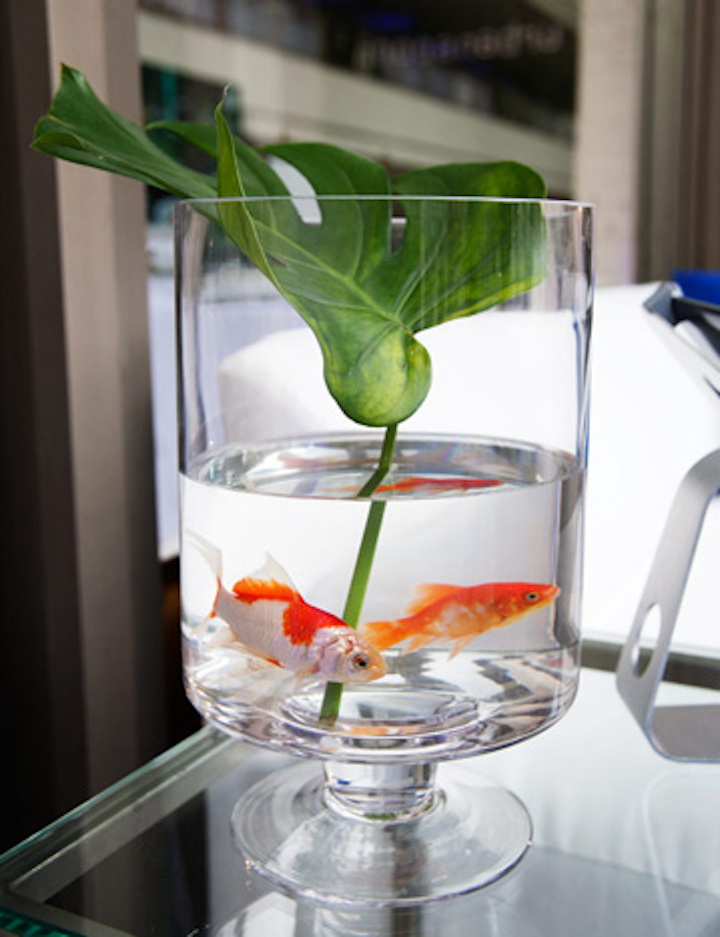 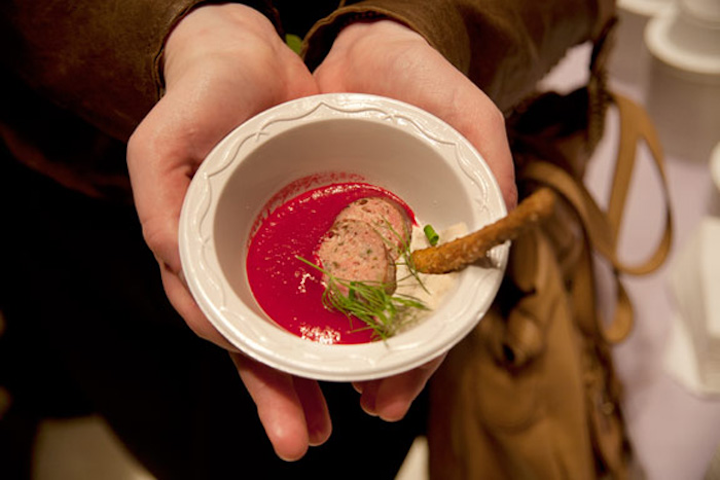 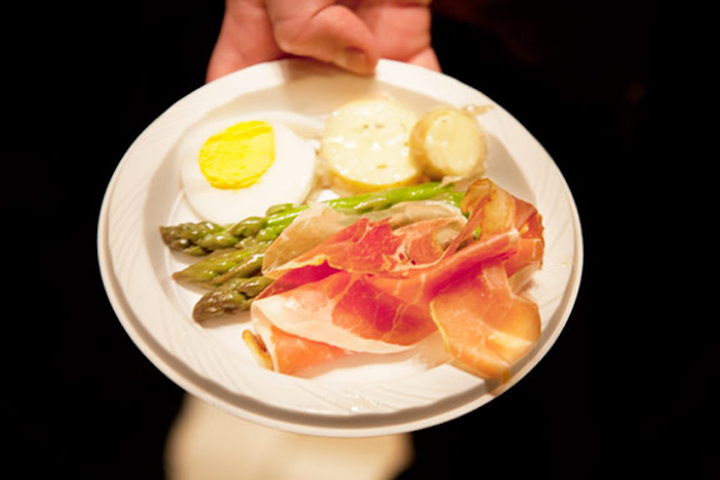 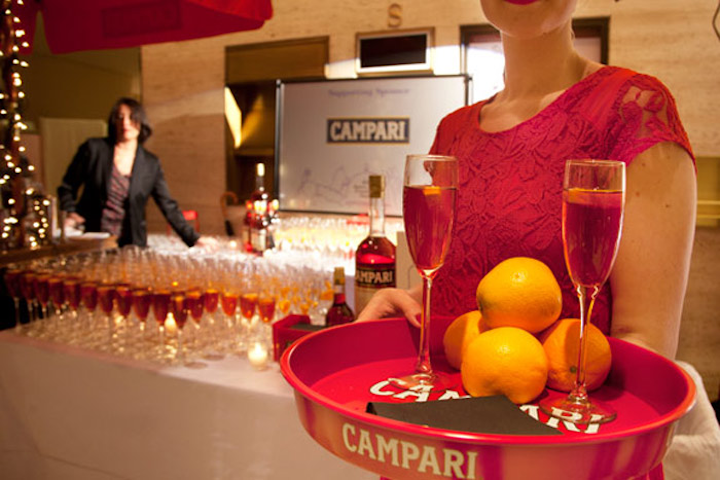 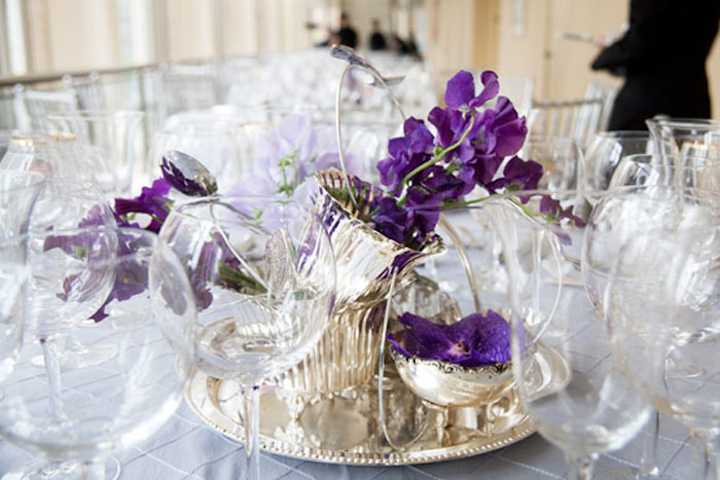 As in past years, around 200 V.I.P. guests (paying $1,500 a head or $15,000 a table) dined upstairs on a mezzanine overlooking the grand promenade. The centerpieces were made of welded-together silverware and silver dishes accented with purple sweet peas and orchids, in honor of the foundation's silver anniversary.
Photo: Sharokh Mirzai for BizBash
More in Food Trends