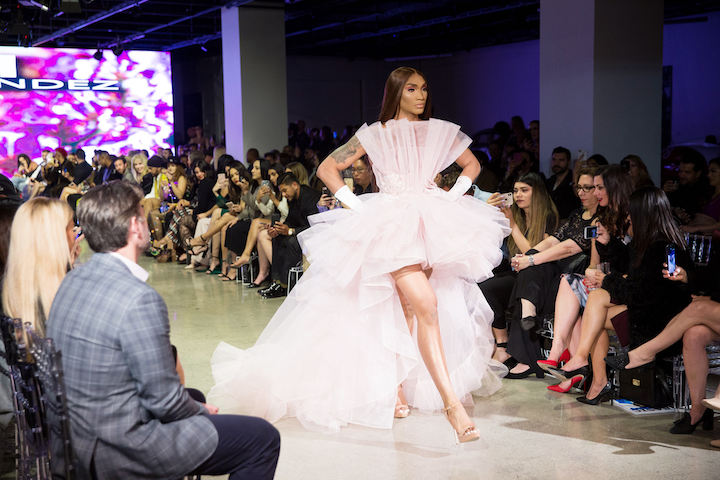 A kick-off for Los Angeles Fashion Week, official venue partner the Petersen Automotive Museum hosted its latest "Cars & Fashion" runway show on March 22. The evening featured a cocktail reception, a runway show with designs from Naeem Khan, and an after-party in various spaces throughout the museum.
Photo: Todd J. Danforth

Moves & Milestones
This week, the Los Angeles Convention Center was honored with the Los Angeles Better Buildings Challenge Innovation Award for its sustainability efforts and energy savings. The venue has 2.58 megawatts of solar power, which is estimated to reduce its carbon footprint by 2,554 metric tons per year.

In Case You Missed It
We learned more about that high-flying Red Bull stunt over DTLA that you probably read about on Twitter, and we took a look inside the California Science Center's black-tie take on a dog theme. We also spoke with Variety's chief marketing officer about how the entertainment brand's events have evolved.

In the News
The James Beard Foundation Awards finalists were announced on Wednesday, with both Bavel and Majordomo making the cut for Best New Restaurant. Winners will be announced May 6 in Chicago. Eater: "The most obvious potential winning category comes in the Best Chef: West bracket, where Los Angeles covers 80 percent of the nominees. Perhaps this could be the year that Michael Cimarusti, long considered one of the West Coast’s best chefs (both by the JBFAs and elsewhere), takes home his award?"

An L.A. activist is calling for a renewed boycott of the Beverly Hills Hotel because of its owner, Sultan Hassanal Bolkiah of Brunei, is implementing Sharia law in his home country on April 3. The boycott was first proposed in 2014. The Hollywood Reporter: "However, in recent years, the boycott lost steam and A-listers returned to their old stomping grounds. ... L.G.B.T.Q. activist and boycott supporter James Duke Mason is calling for the continuation of the boycott, which he says never officially ended."

Eligibility for the 62nd Grammy Awards in 2020 will close August 31, a month earlier than the date for the past nine years. The early date is a result of the Grammys telecast being moved up two weeks to January 26, accommodating the early airdate for the 92nd Oscars, which take place February 9. Billboard: “This is only the second time in 44 years that the end of the Grammy eligibility year has been moved up from its traditional September 30 cut-off. ... The resulting truncated schedule is known to be punishing for Recording Academy staffers, who operate on a tight timetable in the best of times."

Surprise Event Metric of the Week
150,000—the number of attendees expected at the 24th annual Los Angeles Times Festival of Books, one of the nation's largest literary festivals. Taking place April 13 to 14 at U.S.C., the festival will highlight 500 writers, musicians, artists, and chefs, including Chelsea Clinton, Karamo Brown, Valerie Jarrett, and Eva Chen.

Venue Buzz
For a high-speed teambuilding option, Base51 recently opened in Hawthorne. In addition to craft beer and global cuisine, the entertainment venue offers 10 full-motion racing simulators that use virtual-reality technology; the simulators can all be raced together for a group experience. For private events, the venue offers a 4,500-square-foot space that holds as many as 80 people, plus a private beer and wine bar, artisan coffee, and full banquet offerings.

Overheard
"Los Angeles soon will be the marijuana lounge capital of the world. As residents wait for the 16 lounges of West Hollywood to open, the event scene continues to fill the void for those who want a night on the town that involves good friends and weed. While many will range from sketchy to classy farmers markets, some of the newest options feature elite SoCal chefs paired with equally great cannabis and no gimmicks."

—LA Weekly, profiling a series of local chefs who are incorporating cannabis into their menus.

On the Scene
We checked out PopSugar's launch event for the new Joy brand of razors last weekend. The colorful public activation had a fun, Instagram-friendly bathroom theme produced by AGENC.

Also this weekend is WonderCon, an annual comic book convention organized by the team behind the massive Comic-Con International in San Diego. Taking place at the Anaheim Convention Center today through Sunday, the event expects to draw about 60,000 people.

And don't forget: April 4 is Global Meetings Industry Day, a national celebration that highlights the impact meetings have on people, businesses, and the economy. The Southern California chapters of PCMA, MPI, SITE, and ILEA will host a joint celebration for over 300 event pros at the Rose Bowl in Pasadena. Highlights will include education sessions and a networking reception showcasing more than 15 vendors.